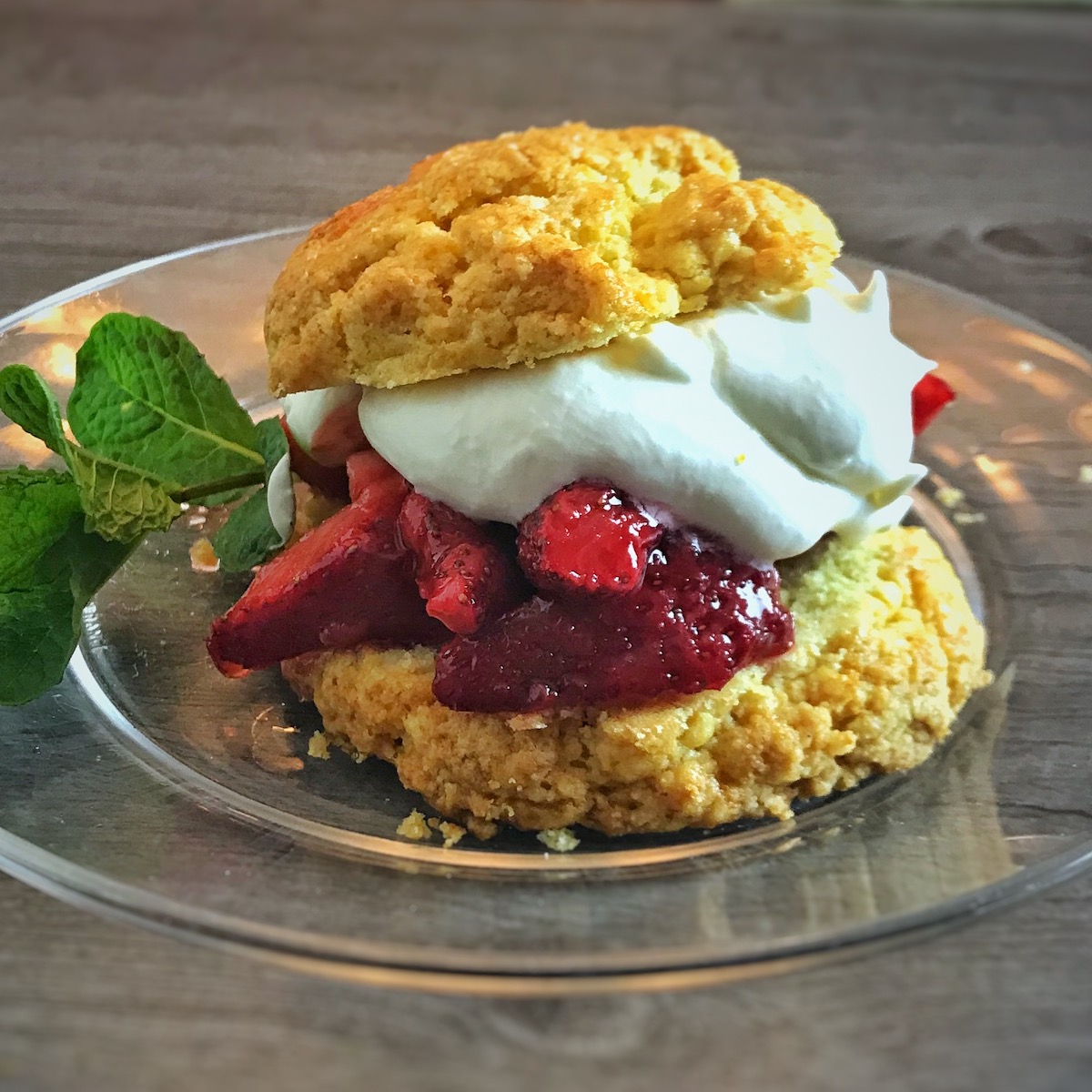 As someone who came into motherhood relatively late in life (days before my 38th birthday), I have been fascinated by the many ways families mark the occasion of Mother's Day.  Many women I know like to take the day off from motherhood, spending it shopping or sipping chardonnay with girlfriends, but I always want to be flanked by my kids on Mother’s Day whenever possible.

Maybe it’s because I worked full-time and didn’t want to sacrifice the time with our girls, or maybe it’s because the older you get, the faster 18 years goes by and I wanted to enjoy every possible minute.   Whatever the reason, Mother’s Day for us is one of togetherness.

In our family, my kids were in charge of the gift giving – which happily equated to beautiful artwork that I have preserved these many years – since, as I remind my husband annually, I am not his mother.  Invariably, the gift-giving also included food preparation of some kind (and here, the Reluctant Gourmet did get involved).

In the early years, this was breakfast in bed; over time as my kids started sleeping in on Sundays, this morphed into dinner.   And in the spirit of togetherness, all of us are typically involved in the meal planning and execution.

This year was no exception.   Even though our kids should have been away at college, Maddie was back home from California and took charge.  She proposed, and I agreed, that we go with lobster rolls, which we had fully researched a few years ago during a whirlwind college tour through New England. 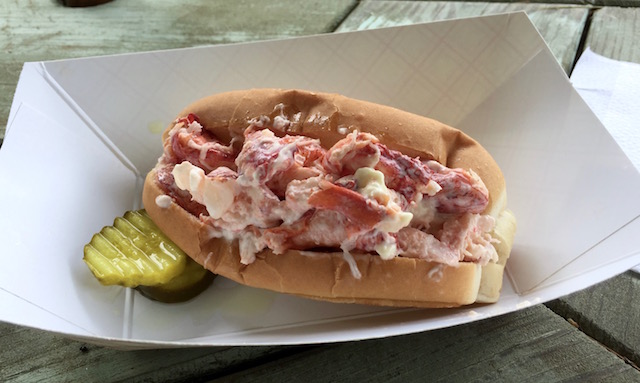 As we reminisced about our favorites from that trip, Maddie remembered the evening in Mattapoisett, Massachusetts, when we enjoyed lobster rolls with our friends on their deck during the town’s strawberry shortcake festival in full swing  just a few feet away.  You can guess what happened next:  strawberry shortcake was added to the menu.

Now I’m not a big fruit-for-dessert person.  When I think “dessert” I think chocolate.  But it was an inspired recommendation, so we forged ahead with strawberry shortcake.

So to my mind, shortcake is basically a sweet biscuit, not unlike a scone.   Shortbread, like shortcake, is sweet, in fact usually sweeter than shortcake.  I think of it as a firm cookie with a LOT of butter that is perfect for dunking.

Back to the making of shortcake.  It is really easy to make as long as you remember in advance that many recipes, including the one we prefer, call for hard-boiled egg yolks.  We don’t keep hard-boiled eggs on hand, and I have had those “oops” moments of thinking I’d whip up a quick dessert for guests and then realizing that I’d have to default to something that didn’t require forethought.  (That’s why we have ice cream in the freezer at all times!)

Also, you need to have heavy cream on hand, which we almost never do.  When planning for shortcake, I buy more cream than needed for the cake so I can make my own whipped cream, which is an essential component of strawberry shortcake.

You also need cornmeal or semolina flour and a lemon for zesting.  Finally, the dough will want to chill before baking so as you can see, while making shortcake is easy, it doesn’t necessarily lend itself to spontaneity.

The Making of Strawberry Shortcake 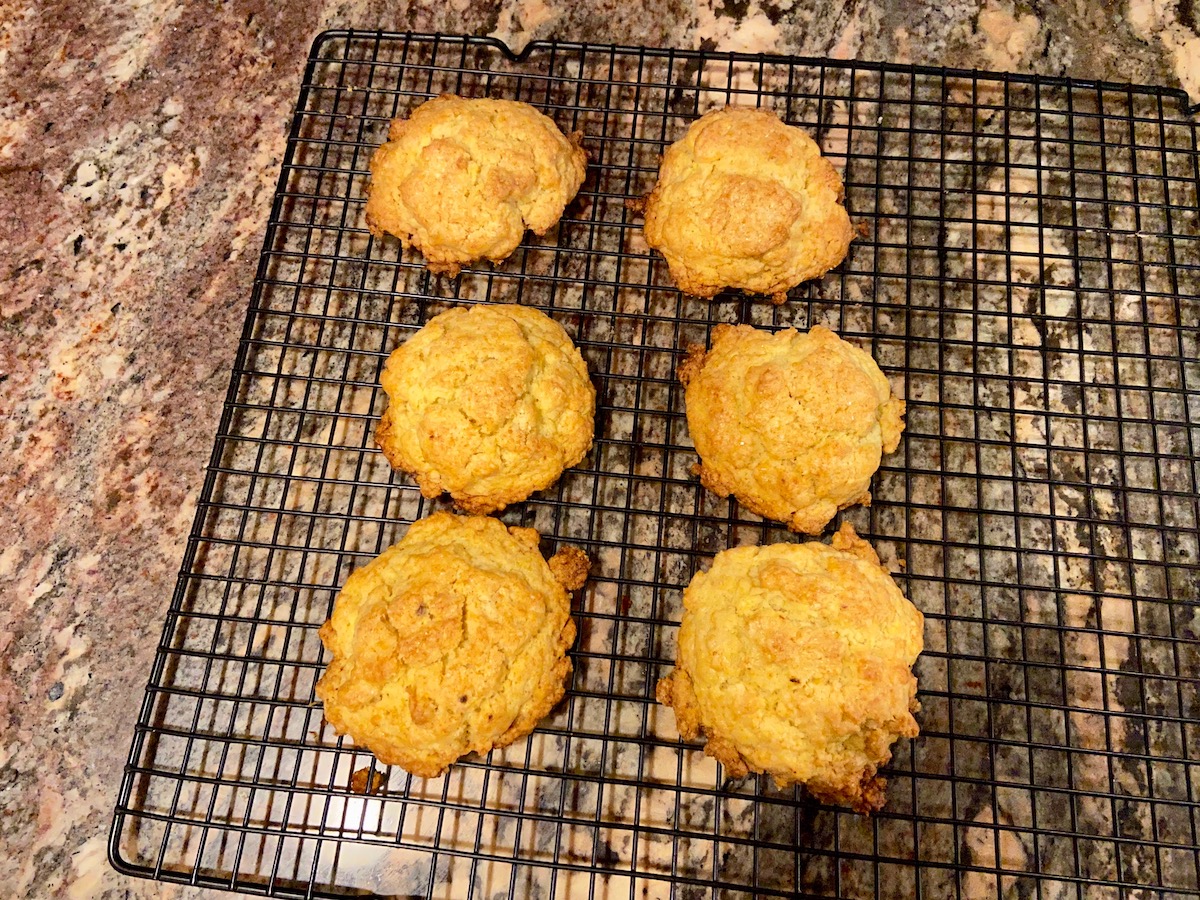 Mid-afternoon on Mother’s Day while two eggs were cooling after boiling, Maddie and I pulled out the rest of the ingredients, including flour, cornmeal, sugar, baking powder, salt, and chilled unsalted butter.  We cut the 6  tablespoons of butter into smaller pieces and began to assemble the dough.

Next we added the butter pieces and pulsed until the butter was combined with the dry ingredients but still in small lumps.  Next we added in ⅔ cup heavy cream, again pulsing sparingly until it was mixed in.

Finally, we turned the dough out onto a baking mat and gently kneaded the dough so there weren’t dry patches.  We divided the dough into 6 equal scoops (don’t flatten – remember that these are scone-like) onto a lined baking sheet and placed the sheet in the refrigerator while we prepared the strawberries. 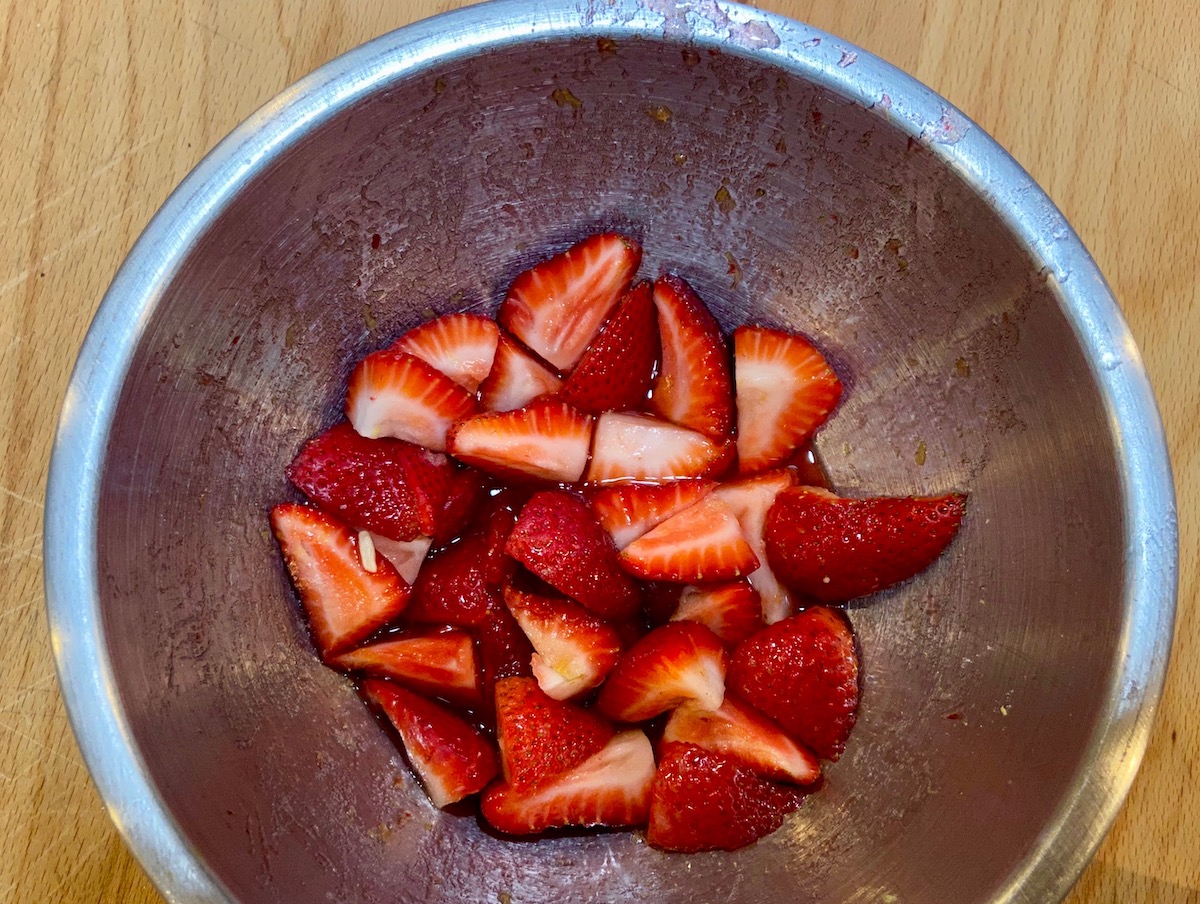 We removed the stems from a quart of washed strawberries and sliced them not too thinly.  We macerated the strawberries by tossing in a bowl with ¼ cup of sugar, zest from half a lemon, and a shake of salt. 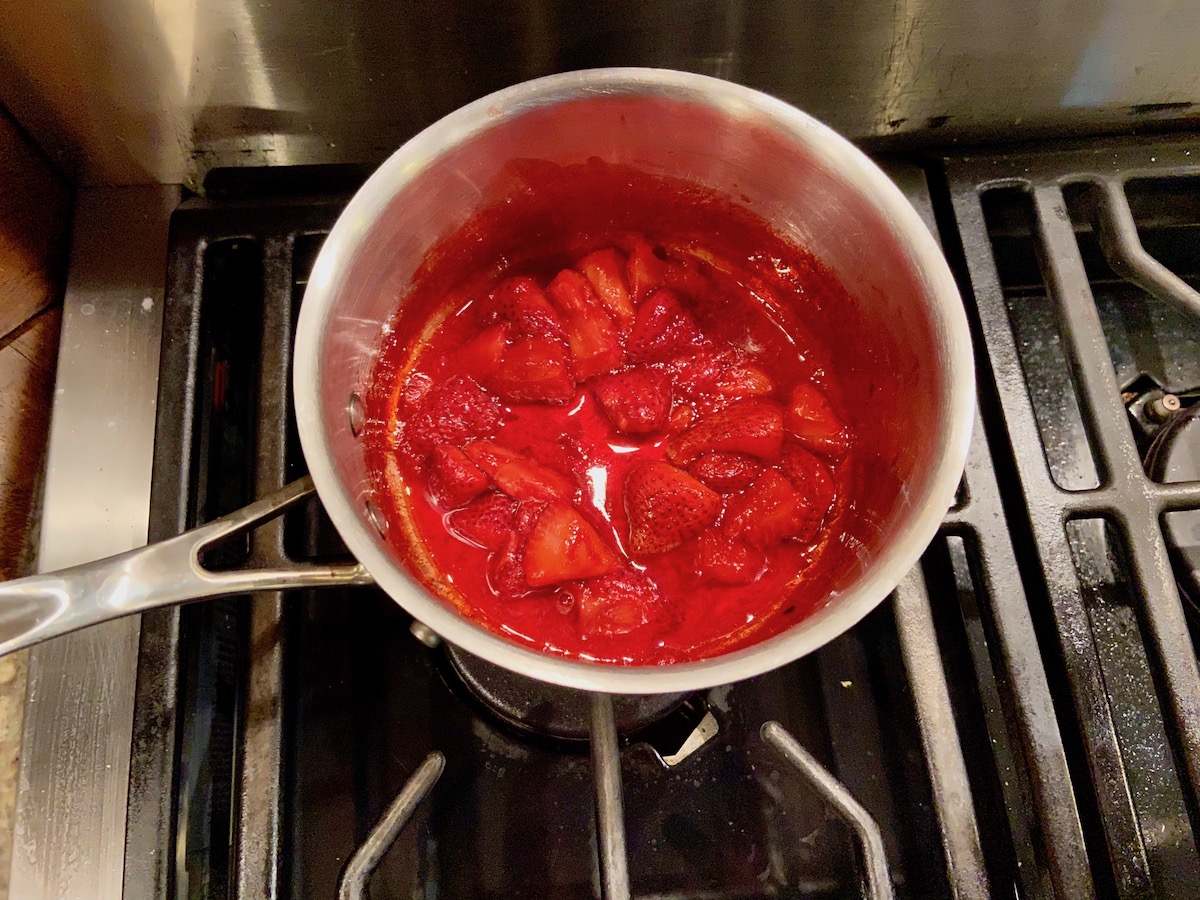 We transferred half that mixture to a small saucepan with a splash of water and simmered over low heat until the berries more closely resembled jam.  This took us about 15 minutes.  We removed from the stove, let the mixture cool, and then added about teaspoon of lemon juice to this as well as to the macerating berries.

When this was done, we took the dough from the refrigerator, brushed some cream on the top of each scoop, sprinkled raw sugar on the top, and baked them in a preheated 350°F oven for a half hour.   When they were golden brown on the outside and relatively firm, we took them out to cool.

We assembled the dessert just before serving, slicing the shortcakes across the middle to create a bottom and a top, spooning both the jammy and macerated berries onto the bottom half along with whipped cream (see recipe).  We topped it with the other half of the shortcake with a dollop of whipped cream on top of that, and placed a spring of mint from our garden on each.

The perfect end to a fabulous Mother’s Day feast! 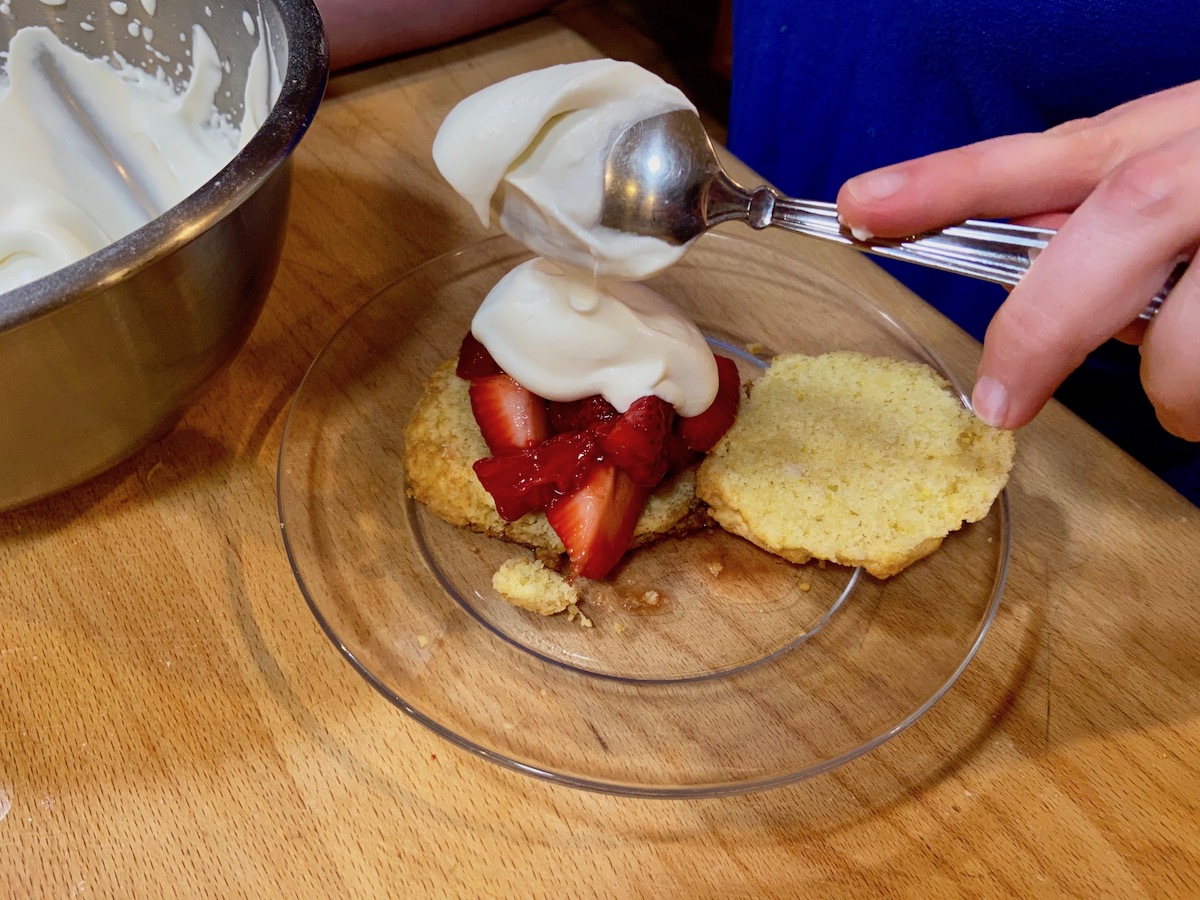 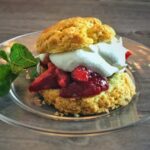