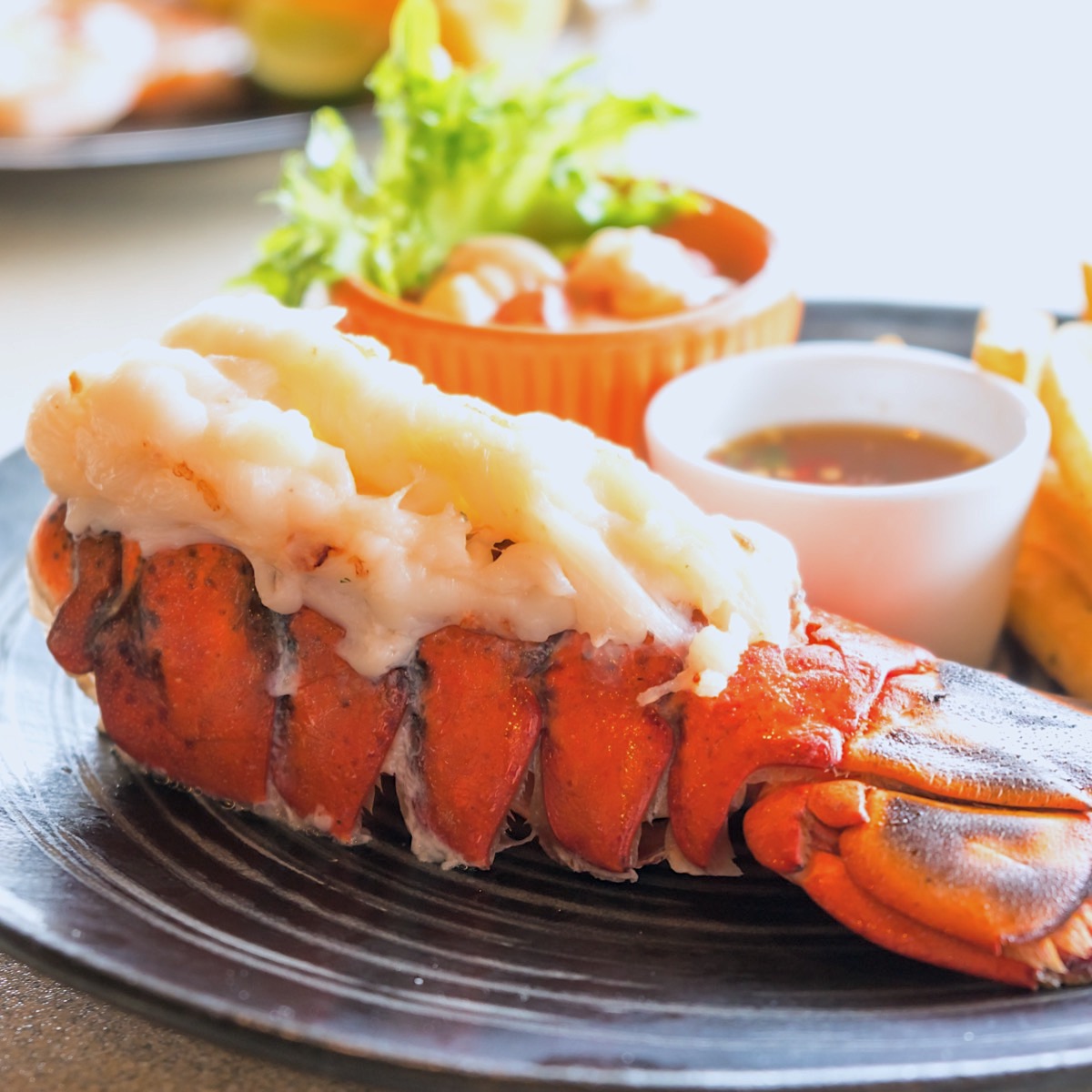 How to Broil Lobster Tails

There are several ways to prepare lobster tails but my favorite cooking method is to broil them. It doesn't take long to prep and cook them and the presentation is amazing.

How Long Do You Broil Them?

The answer to this depends on several factors - the size of the lobster tails, distance from the broiler, and gas or electric broiler all contribute to how long they will take to cook. I can tell you it takes exactly 8 minutes under the broiler to cook but then you may find them over or undercooked. I can give you a time range but you have to pay attention to them while they cook.

Figure about 1 minute per ounce so a 4-ounce tail will take approximately 4 minutes but again, this depends on how close you have them to the broiler, whether they are at room temperature when you start, and the efficiency of your oven.

Part of the problem for me when cooking something like lobster tails is I don't cook them that often. The last time I broiled a lobster for one of my kid's birthdays, I put them too close to the broiler and the tops were burned. This time I put them a little too far from the broiler and one of them (the largest tail) was undercooked so I had to throw it back in for another minute.

If you worked in a restaurant and prepared 30 broiled lobster tails every night, 7 days a week, you'd be an expert very quickly but when you only cook them a couple of times a year, the most important thing you can do is pay attention while they are cooking. 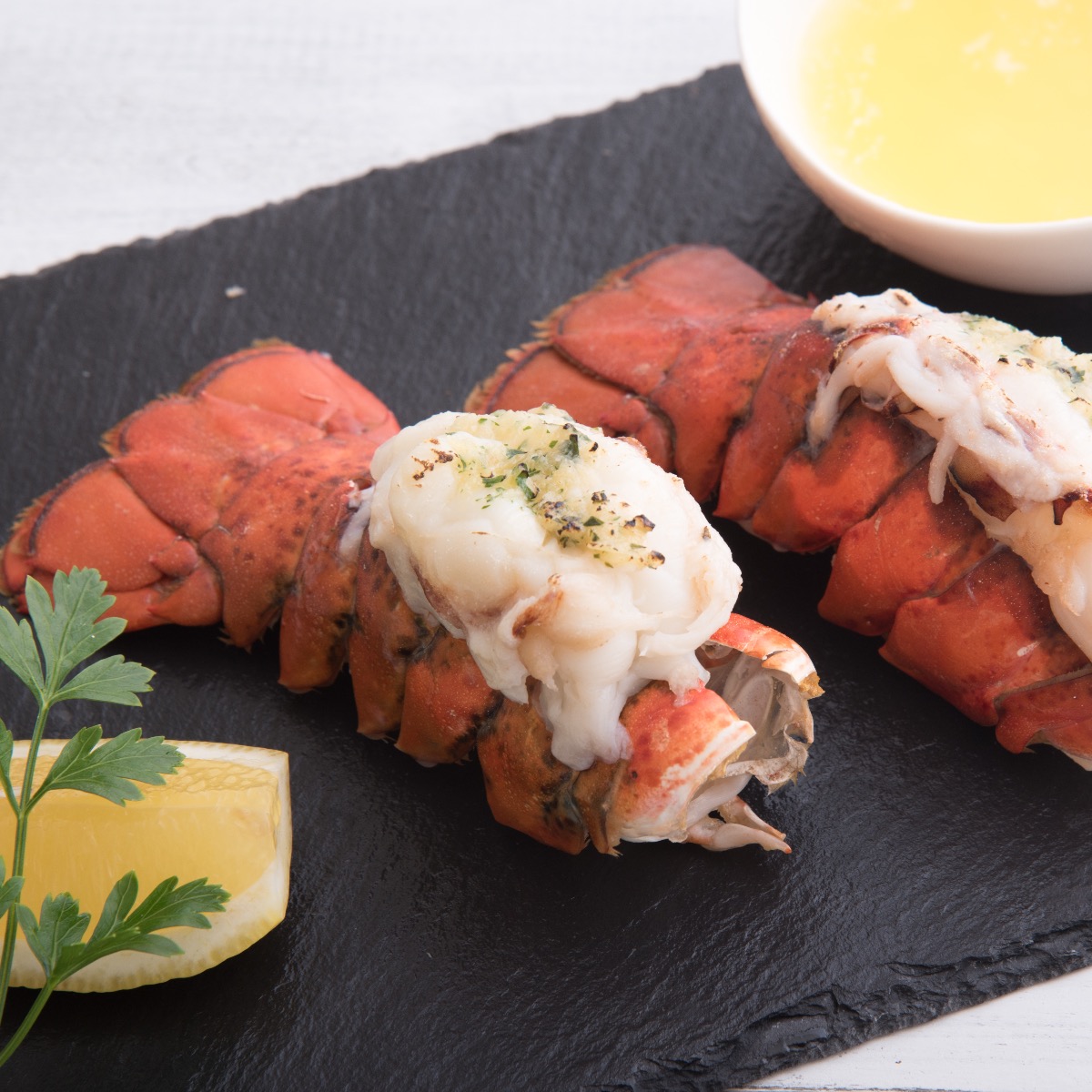 Removing the lobster meat from the shell is not that difficult. There are two ways I've seen this done. One, make a single cut to the top part of the shell with kitchen scissors right down the middle from the open end of the lobster tail toward the tail end.

The other way is to make two cuts, 1 inch apart, down the center of the tail again from the open end toward the tail. I usually just make one cut because cutting through the tails with scissors is not that easy however, it is easier to get the tail meat out with the double cut.

If you are using frozen lobster tails, be sure to allow enough time to thaw them out properly. Take fresh or thawed-out lobster tails out of the refrigerator before you start broiling them. You don't want to start with cold tails.

I like to keep things simple when it comes to lobster. MELTED BUTTER. That's it. I brush a little on at the start and serve more in a small dipping bowl with the lobster. If you have the time, try making some clarified butter to serve with your tails. Many people season their lobsters with salt & pepper and paprika can be added for its flavor and appearance. Of course, lemon is a natural condiment to serve on the side. In our house, we like it simple - just butter.

How to Broil Lobster Tails

Start by moving one of the oven racks to the second-highest position. I found if you place it at the highest position, there is a better chance of burning the exteriors before the internal meat is cooked. Preheat the broiler while you prep the lobsters. 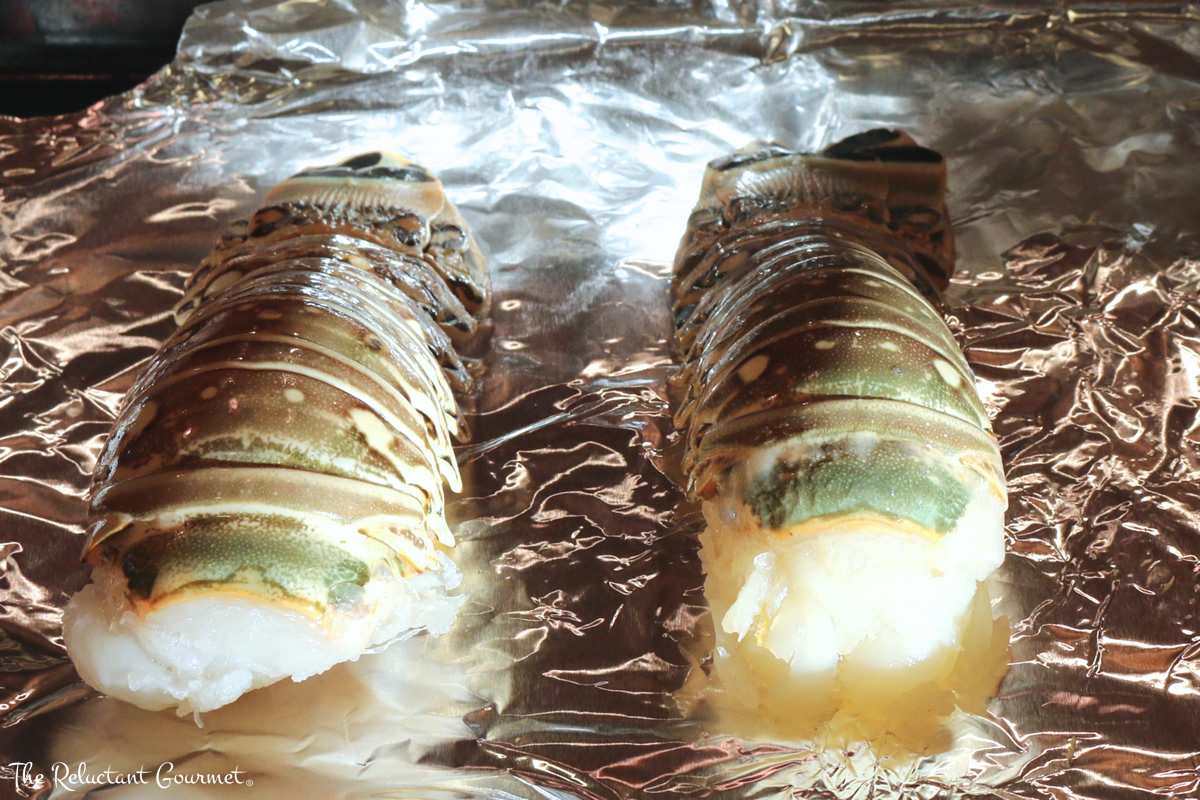 Cover a baking pan with tin foil and line up the lobster tails on it. 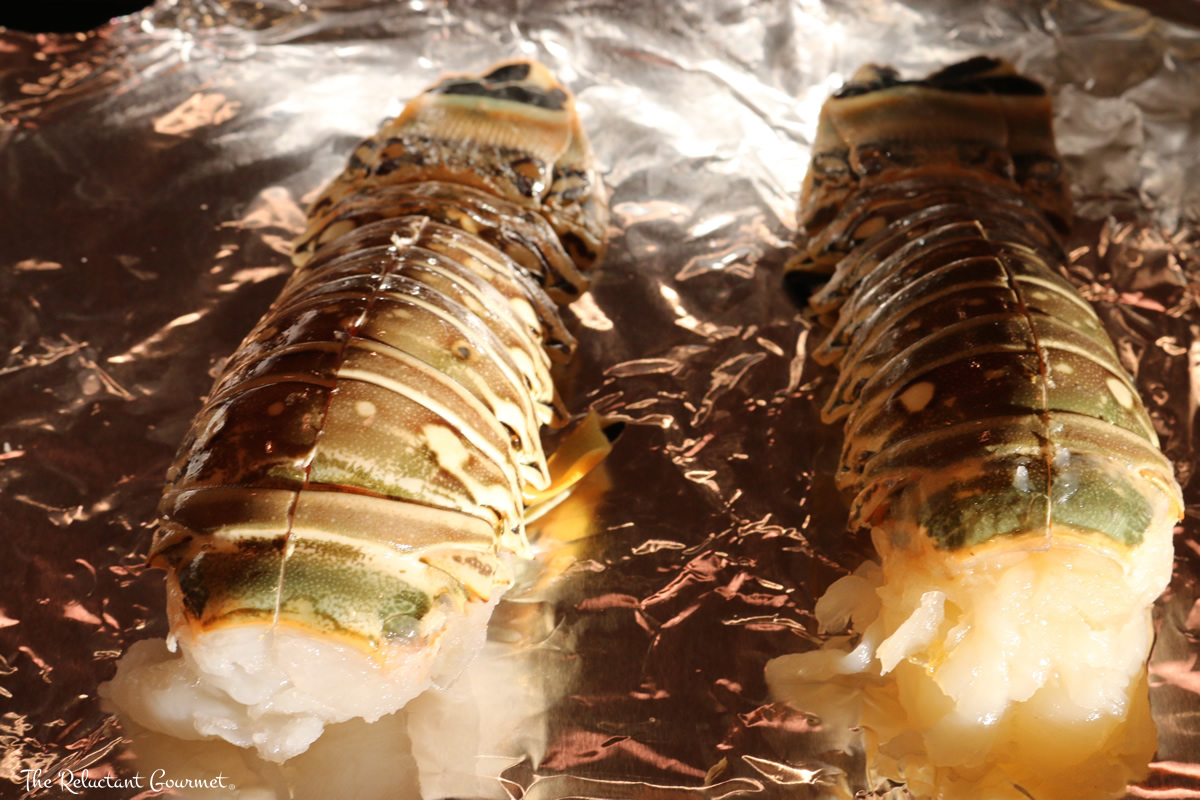 Using kitchen scissors, make a cut on the top part of the shell from the open end to the tail. Be careful to cut only the shell but if you get a little lobster meat in the process, don't worry about it. More importantly, be careful not to cut yourself. 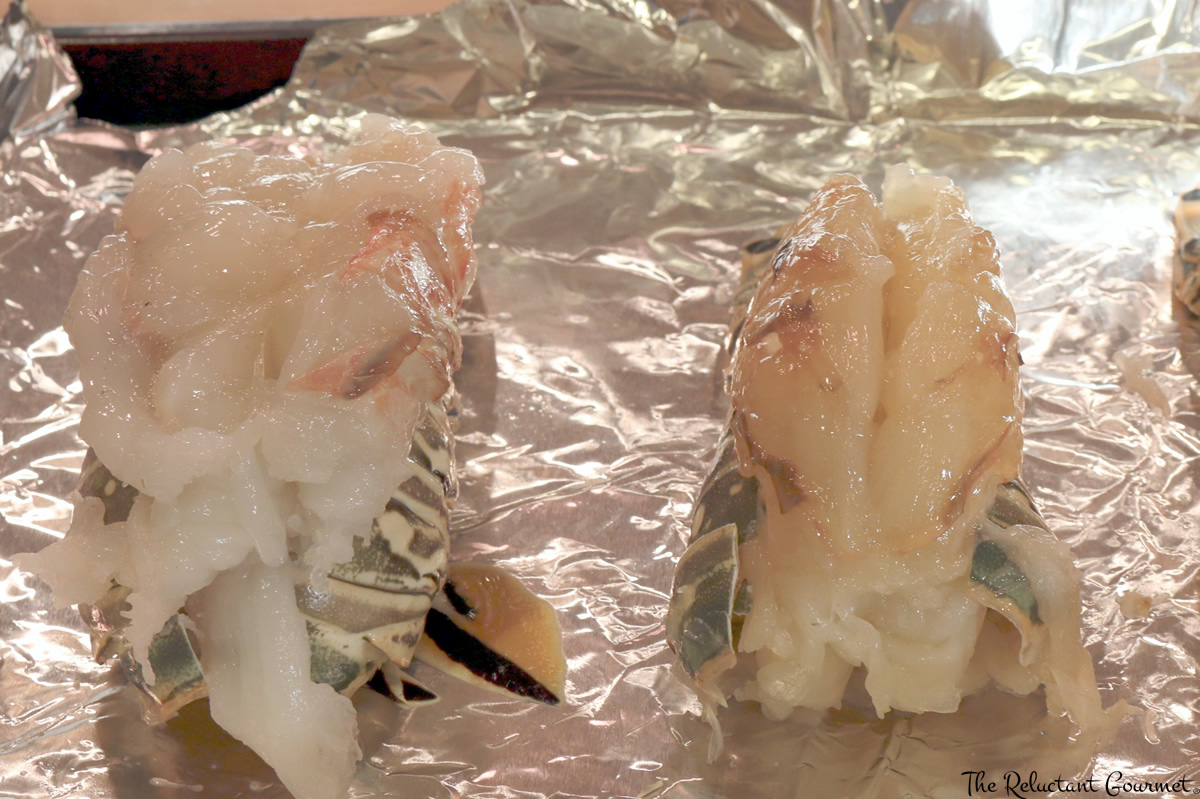 Carefully lift the lobster meat up from inside the shell so it ends up sitting on top of the shell. The meat will still be attached to the shell at the fan end. Brush a little butter onto the tails. If you want to season them, now is the time.

You could also add a little salt and pepper to the butter before applying it. Be sure to use a different melted butter than the one you are going to serve with the finished tails. You don't want any potential cross-contamination. 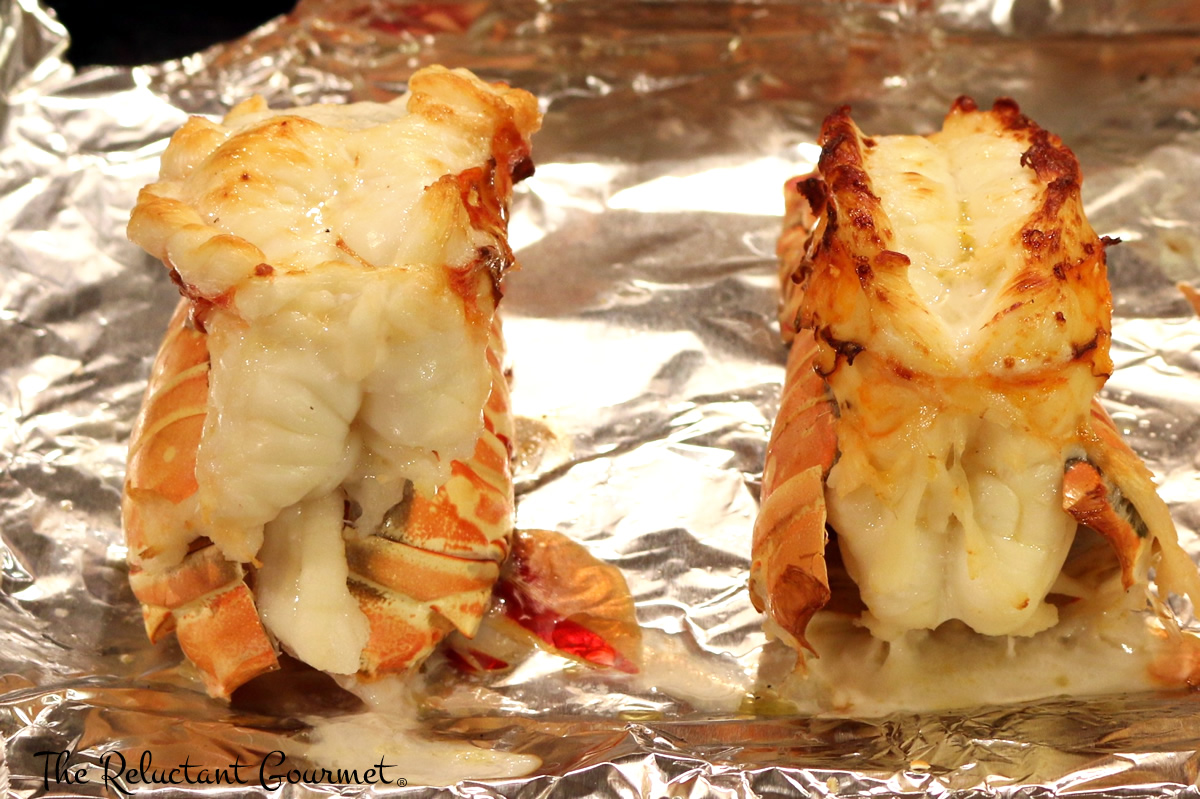 Place the lobster tails under the broiler and cook until the lobsters are done. Don't you love it when someone says, "Cook until done."? The tails are done when the meat is no longer translucent and becomes opaque.

In my opinion, I would rather under-cook them and have to put them back under the broiler than overcook them. Serve the lobster tails immediately with melted butter and any other seasonings you decide to serve with them.

Know for their crabs but another great resource for live Maine lobsters and other seafood. Greg Cain started CrabPlace.com in 1997 in Crisfield, Maryland, America’s seafood capital by selling and shipping fresh Maryland crab caught daily by local watermen. Their unique packing and delivery processes kept crabs at their freshest, and our satisfied customer base grew quickly. They expanded to selling live Maine lobsters and lobster tails and pride themselves on delivering fresh seafood from the dock to your door, and to your table. They are committed to ensuring that their service is as outstanding as their food. Your complete satisfaction is their goal, and they back that up with their CrabPlace.com Guarantee.