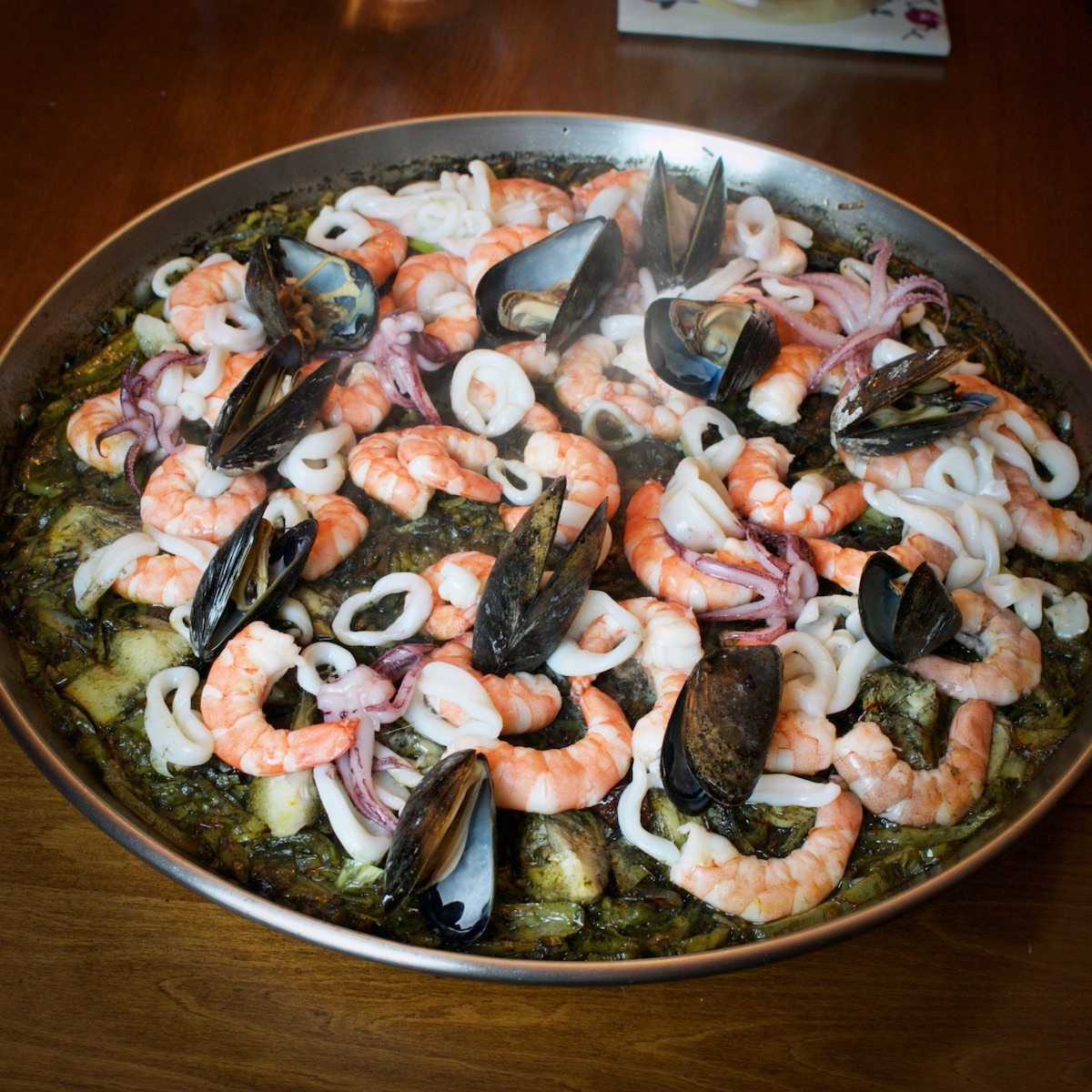 Aunt Judy is really my wife's sister but we've been calling her Aunt Judy to our kids for as long as I can remember so it has become an affectionate nickname in our home.  Judy is an incredible cook who loves to learn everything she can about cuisine around the globe including this Valencia Paella recipe.

She and her husband Bill travel a lot and when they do, they typically come home with a new recipe, cooking technique, or ingredient to share with the rest of us. On her most recent trip to Spain in December, she learned how to make paella.

She and Bill visited us a couple of weeks ago and shared with us her story of making this classic Spanish meal. She told us the amazing situation of how she learned this incredible recipe so I asked if she would write about it so I can share it with my readers.  Thankfully she agreed.

The photo above shows the version of Paella she prepared at our house on this visit. She made it with squid, shrimp, and mussels.  So here is Aunt Judy's account of her paella experience in Spain. 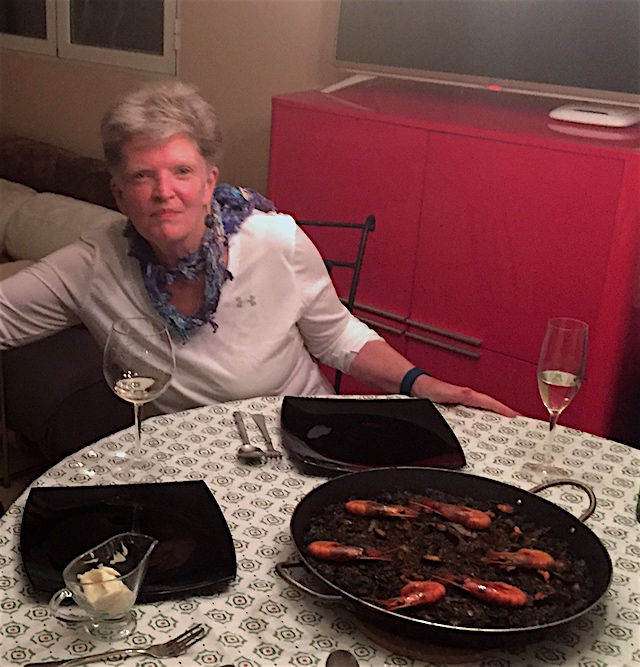 We spent two weeks in Spain last December. The first week was my husband's birthday trip to Barcelona which we spent “tripping” on Gaudi!

The second week was a sunny winter beach vacation in Alicante with our daughter and her two children from Sligo, Ireland. In between, we spent two days in Valencia to see the sights. Little did we realize the culinary adventure in store for us there!

Before we arrived at our VRBO apartment, our host Emilio contacted us and offered to teach us how to make paella. We accepted his offer immediately and selected black seafood paella from the options he listed. (Really, you can add any combination of ingredients to paella—see Mark Bittman’s master recipe .)

When we arrived he had already purchased all of the ingredients including fresh vegetables and seafood from the market. We had such a good time putting it all together that Emilio stayed and joined us for dinner.

The next day my husband Bill and I went to the market to replenish our paella ingredients and made it again that night. It was almost as good as Emilio’s. So we really can’t recommend any other restaurants in Valencia!

Traditionally, you serve the paella by carrying the paella pan right to the table and everyone eats directly out of it. Of course, you can also plate individual servings, but I still think having the finished paella pan on the table is so spectacular you want to have it as the center of attention so everyone can “ooh and aah”!

Also, traditionally, seafood paella is served with aioli—a garlic mayonnaise—and a great fat! It’s sort of like ordering snails so you can eat the garlic butter. 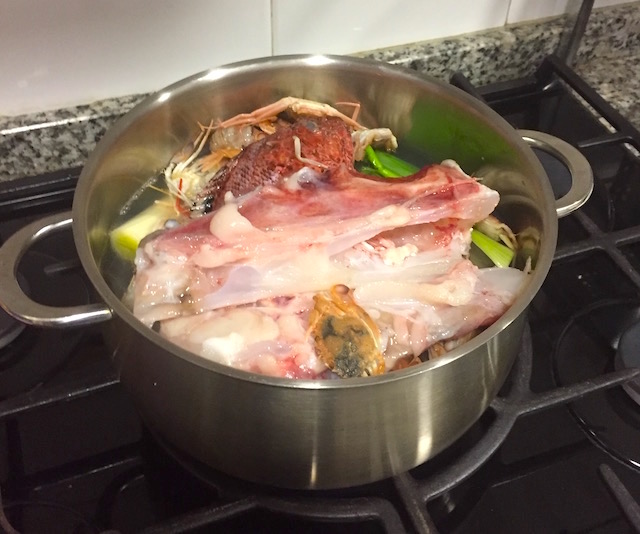 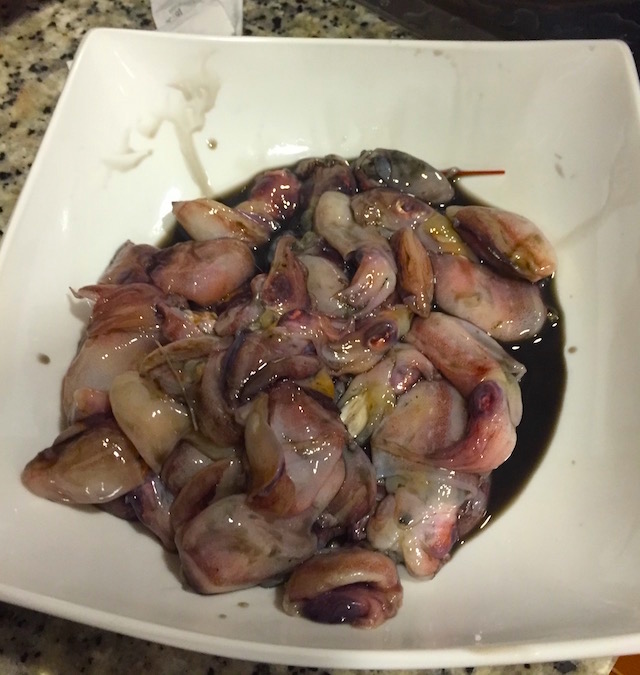 We then started the mussels steaming so we had something to snack on as we were preparing the paella. He used very little liquid in the mussels pot—I guess the mussels themselves released enough liquid. He did add some smoky paprika for flavor. Very tasty!

Prep the seafood you are going to put on the top of the paella. Emilio had langostino for the top of our Valencian paella. At home, I have used shrimp, mussels, and squid.

Note: I had never prepared squid before, so I asked the fish guy at Wegman’s how long to cook it. He replied no more than one and a half minutes OR one hour!

By that, he meant that to end up with tender squid you need to cook it very briefly or for a very long time. I made sure to keep it under a minute and a half and it was superb!

Type of Rice & How Much

Note: The following is the only “fact” I have in this piece. I like facts, but since I learned it on the fly, I can only pass the guidelines on to you to make up as you go along.

He kindly measured the rice—50 grams is about one-half cup. So now at home, I use one-half cup of rice and 2 cups of broth per person. He had bomba rice for us. I have used Valencia rice and Arborio rice at home—just don’t use long-grain rice or sticky sushi rice. 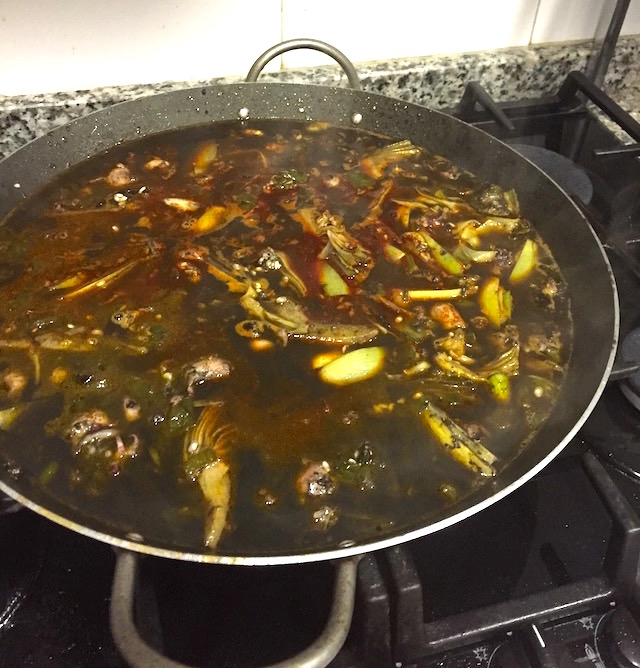 You can cook the paella on the top of the stove or on a grill. (If you’re a pro, or like cooking toys, you can also buy a circular cooking ring to fit your paella pan and deliver even all over heat!)

Use a temperature that doesn’t burn when you’re sauteing and keeps it bubbling once you’ve added the broth. If you’re cooking on the top of the stove, you may need to move the pan around a bit to keep the entire bottom of the pan a consistent temperature.

I was nervous about this at home, but it’s pretty obvious if/when you need to make adjustments.

I bought an inexpensive 15-inch carbon steel paella pan from Amazon. I only knew how to cook paella in a paella pan, so I decided to go for it. There are so many sizes and materials but I selected the traditional (and economical) option—carbon steel.

It does require some maintenance since it can rust, but I have to take care of my wok in the same way. I chose a size that fit the measurements of my stove top, oven, and grill.

I then selected a 15-inch pan that is rated for 3-5 servings since I thought that would be most useful and I could always get a second one if we were going to have a lot of people or wanted a selection of different types of paella. I have used it to feed 2-6 people, so it turned out to be a good choice.

We thinly sliced some Italian sweet peppers and sauteed them in olive oil in the paella pan until soft. He then grated a fresh tomato over the peppers and let it cook down. That was a new one for me! I will try it when we have good tomatoes in the summer; so far I have used canned diced tomatoes.

Emilio offered this guidance: don’t add both tomatoes and onions to the same paella because together they will add too much liquid. I have added both, but I drain the tomatoes very well unlike his grated tomato which included a lot of liquid.

The next step was to peel and quarter fresh baby artichokes and then add them to the pan to saute until soft. He put a glass lid on at this point to help the artichokes cook. Since I only have canned artichoke hearts at home, this was not a problem—unfortunately.

At this point, we added the rice all at once and stirred to coat it evenly with the oil and the vegetables. We then added the cuttlefish ink to make it black and stirred it. (Like almost anything else, you can get cuttlefish ink from Amazon and a number of other culinary sites.)

He also added a packet of Spanish paella seasoning, but I don’t know what was in it. At home, I added a pinch of saffron at this point. As you can see, so far this is a lot like making risotto—until the next step.

Once this is all stirred together, we added the hot seafood broth all at once. Stir to combine and then let it bubble away.

We let it cook for about 20 minutes, maybe stirring gently once or twice and re-positioning the pan on the burner occasionally. The paella is done when it is dry throughout and has formed a nice brown crust on the bottom (soccarat).

One test for doneness is to tilt the pan to thirty or forty-five degrees—the paella should not fall out! 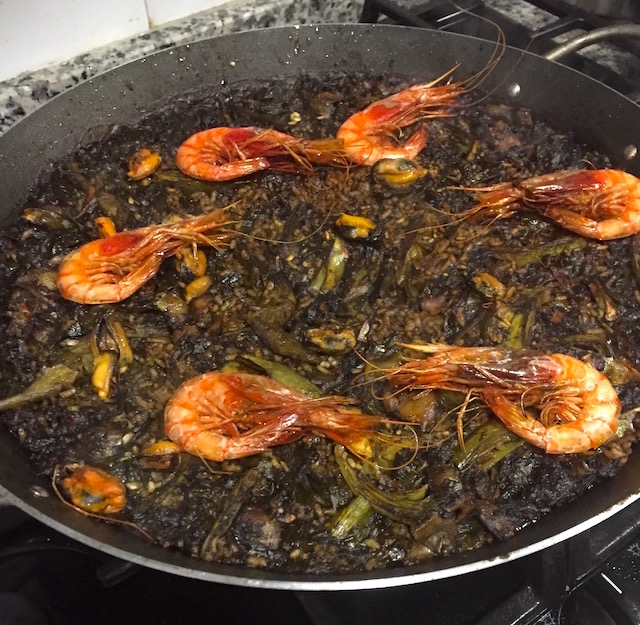 Now that the rice is finished, it’s time for the seafood on top. You can cook the seafood separately and just place it on top of the rice prior to serving. This is a good solution if you have a mix of seafood that needs different cooking times or methods. Emilio cooked the langostino on top of the paella for the last few minutes.

At home, I lay the seafood on top of the rice and then cover it all with the lid to my wok so that the seafood can steam. The wok lid works well because it is the right circumference and has a nice high dome.

I put the seafood on in order of the amount of time it needs to cook with the foods requiring the longest time going on first—covering again after each addition. Since this is the method I use, I don’t finish it in the oven like Emilio did.

Enjoy—I’ll be excited to hear about your paella adventures!

Aunt Judy had some cuttlefish ink that she said you can purchase at Amazon. You don't need it, but it does give the rice a rich, dark color.