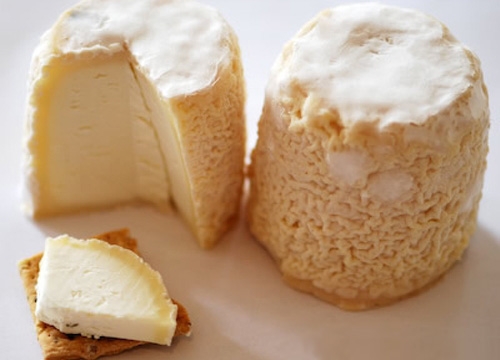 My wife sent me to the Ardmore Farmer's Market with instructions to come home with a "delicious, creamy, goat cheese that can be spread on crusty French bread."

With mission in hand I immediately checked in with my my favorite cheesemonger, Jack, who turned me onto Chabichou du Poitou, a soft, unpasteurized goat's milk cheese made in the Poitou-Charentes region of France.

This is a delightful cheese that you may be able to find if you have a great cheese shop near you but if not, I've listed a couple of online sources at the end of the post.

Chabichou du Poitou, like many other famous cheeses, is only produced in specific regions. In the case of this cheese, it is made in the Poitou-Charentes region.

For those of you who, like me, aren't very familiar with French geography, the Poitou-Charentes region is located about 100 miles north of the city of Bordeaux and about 30 miles inland from the west coast. It is halfway between Paris and Bordeaux.

About the size of a wine tumbler, it is made from whole goats' milk, and as such, has the characteristic "bright white" color in its interior. What makes this cheese so special is that it not only has an edible rind, but right beneath the rind is a thin buttery layer before you slice down into the firm, creamy, white center.

It's these three flavors and textures that give this cheese such complexity. It is very "goaty," but in the best way possible. It also tastes somewhat sweet with a bit of a salty/tangy edge at the end when you swallow.

You can eat Chabichou du Poitou when it is young (up to 3 weeks) with a white paste that may be a little chewy, ripe (up to 6 weeks) with a spreadable texture and sweet flavor or dry (2 months) with a nutty flavor. Each will offer you a slightly different taste.

The Chabichou I tasted was perfectly ripe, spreadable, mild and melts in your mouth.

I was surprised to find out that the first goats were introduced to France by the Romans. Much later, the Saracens continued the practice of raising goats in and around the Loire Valley until they were eventually pushed out during the Battle of Poitiers. When they left, they left behind their goats along with the recipes they used to make goat cheese.

So, the Chabichou du Poitou, named for the Arabic word for "goat," has a history that begins back in the 8th century!

How It Is Made

While there is some industrialized production of Chabichou du Poitou, the best are still made using traditional methods. The process starts with whole, unpasteurized goat's milk. It is slightly pressurized for a brief period, and then the curd is left to set up for a day or two at a specific temperature.

Afterwards, the curd is packed into molds that are perforated. The perforations allow the whey to drain and for the curd to become more solid. After a period of draining and turning, they are turned out of their molds and packed either in brine or with crystalline salt.

Then, it is further drained, dried and then aged for at least ten days or up to three weeks. Some of the cheeses are even aged up to three months for a much more pronounced flavor and firmer end product.

Like many goat cheeses, Chabichou pairs nicely with white wines. It is particularly nice to have with a chilled Sauvignon Blanc. If you can find a wine from the Loire region in France, that would be ideal. I like to enjoy Chabichou du Poitou just spread on a crusty baguette, but you could even serve it as a light end to a springtime meal.

I would not, however, sprinkle it on a salad. It is much too wonderful and complex on its own, and a "lesser" goat cheese would work just as well, and perhaps even better because it would be milder and would pair better with a vinaigrette. For the same reasons, I would never melt it into a sauce.

I did find one classic preparation that reminds me a little of a Caprese salad: put alternating slices of Chabichou du Poitou, cornichon (pickle) and tomato on a bed of cooked rice in a small baking dish. Sprinkle with a little oregano, thyme, salt and pepper and then drizzle with olive oil. Bake at 350° F for half an hour and serve warm.

« Where Do Waiters Go To School
When Recipes Don't Work Out »