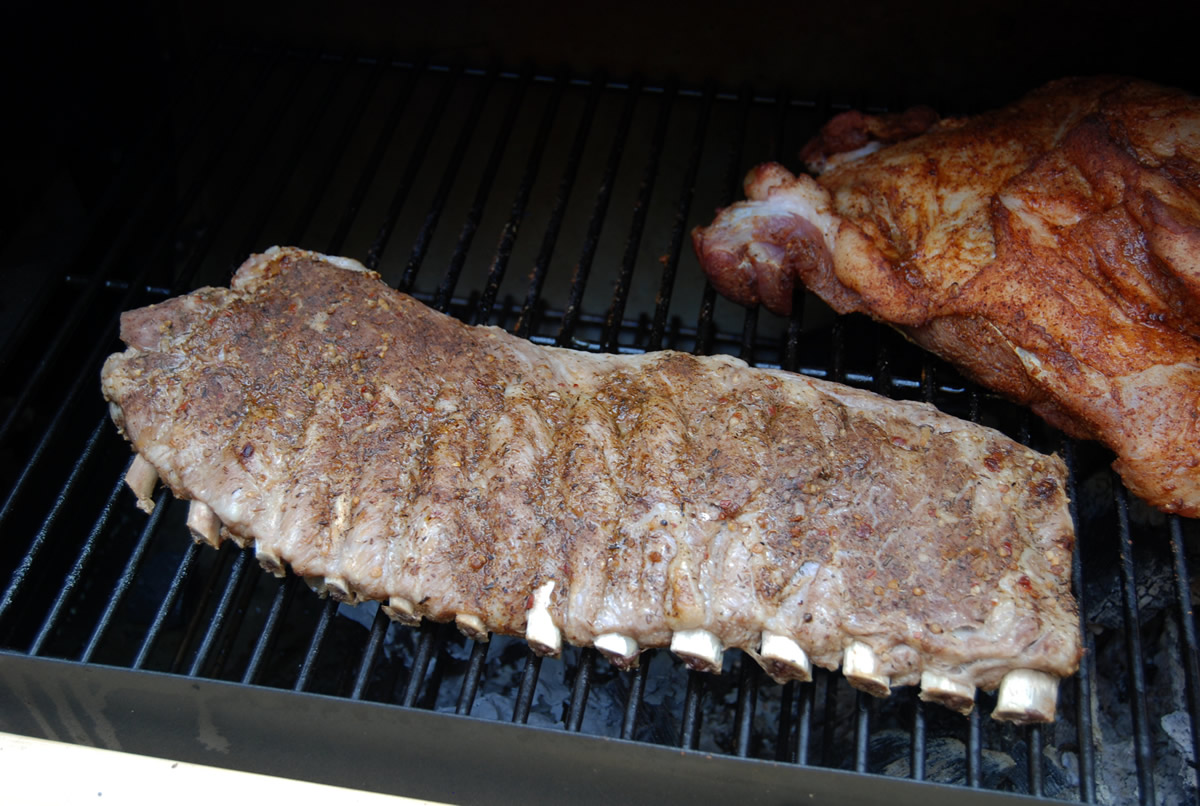 Shedding Some Light on Ribs

I wrote a post last week called What Is Barbecue about the different styles of barbecue.  There's so much information out there on barbecue, but even after all my research, I probably just barely scratched the surface.  While the sheer amount of fact and opinion out there is daunting, I still want to make an amazing rack (or three) of Kansas City-style ribs for my family.

And maybe it will answer more questions that you might have.  As a home amatur cook, I write these posts when I want to learn something new about a particular subject with the idea that you may have the same question. After all, we're in this together.  Let's learn about ribs

Just like in humans, the ribs are attached at the spine and at the sternum, and form a cage that protects vital organs such as the heart and lungs.  In cross-section, portions of the rib cage form a circle, just like a real cage. 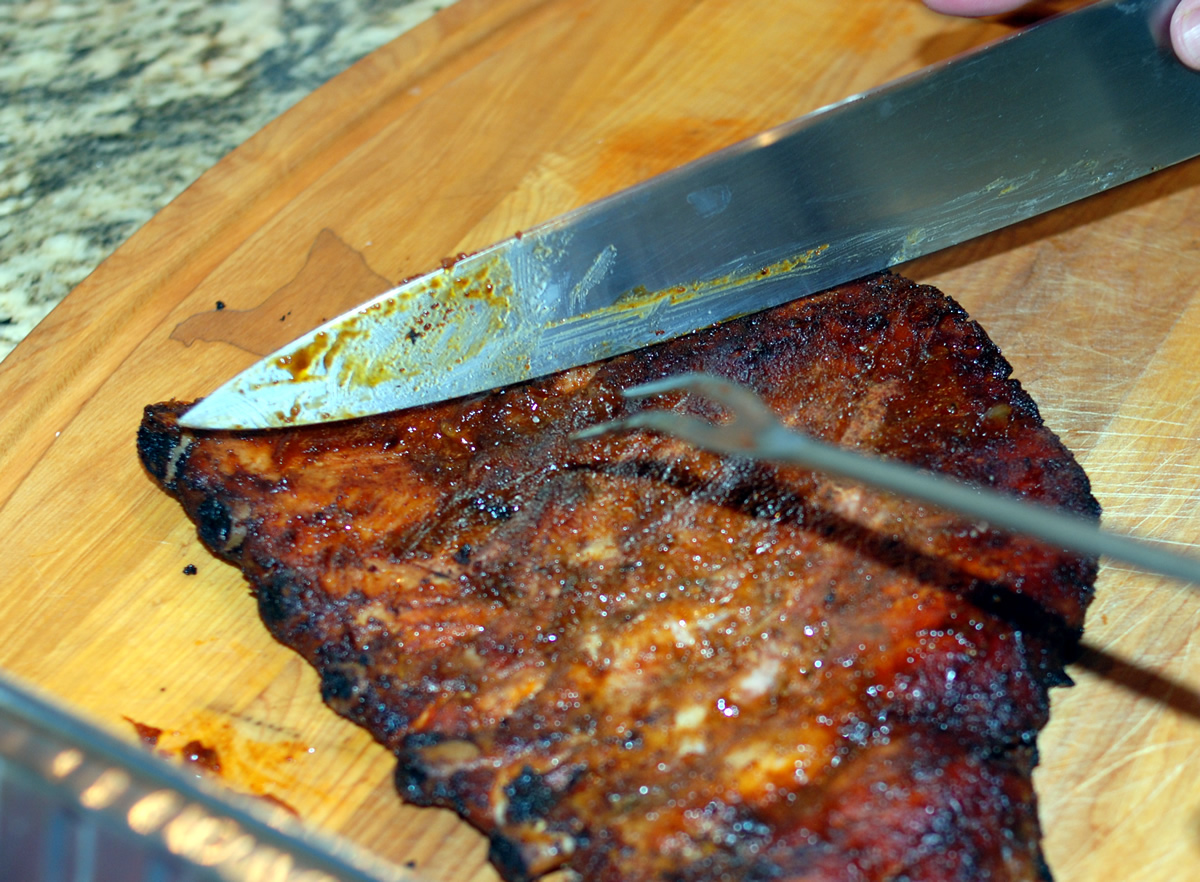 But ribs are ribs, right?  They probably all taste the same?

This is absolutely false.  Baby back ribs are fairly small and curved, are leaner and more delicate in flavor.  Spare ribs are larger and flatter and contain a lot more fat.  Since fat carries flavor, spare ribs are often favored by barbecue experts due to their rich meaty flavor.

Many national chain restaurants serve baby back ribs because they are smaller and cook more quickly, but for real barbecue aficionados, and real barbecue restaurants, pork spare ribs are the ribs of choice.

Before you Texans start chiming in, yes, I know you can also barbecue beef ribs.  But for me, pork ribs not only give me that slightly sweet flavor that I love, they are also better suited size-wise to my family.  Beef ribs are huge and have a lot of meat. If you're a big eater, or you're from Texas, you can absolutely barbecue beef ribs rather than pork ribs; just remember that beef ribs will take longer to cook, so adjust your cooking time accordingly.

The main difference among the different styles of ribs are whether or not a rub and/or mop and/or sauce is used and the way the ribs are trimmed.  For example, St. Louis-style ribs, the kind that I'm most interested in making, are spare ribs that have been trimmed of the brisket end and the skirt.

(If your eyes just started to glaze over, you're not alone.  Mine did too when the butcher told me that.  Don't worry, though--just ask the butcher to trim them for you.) 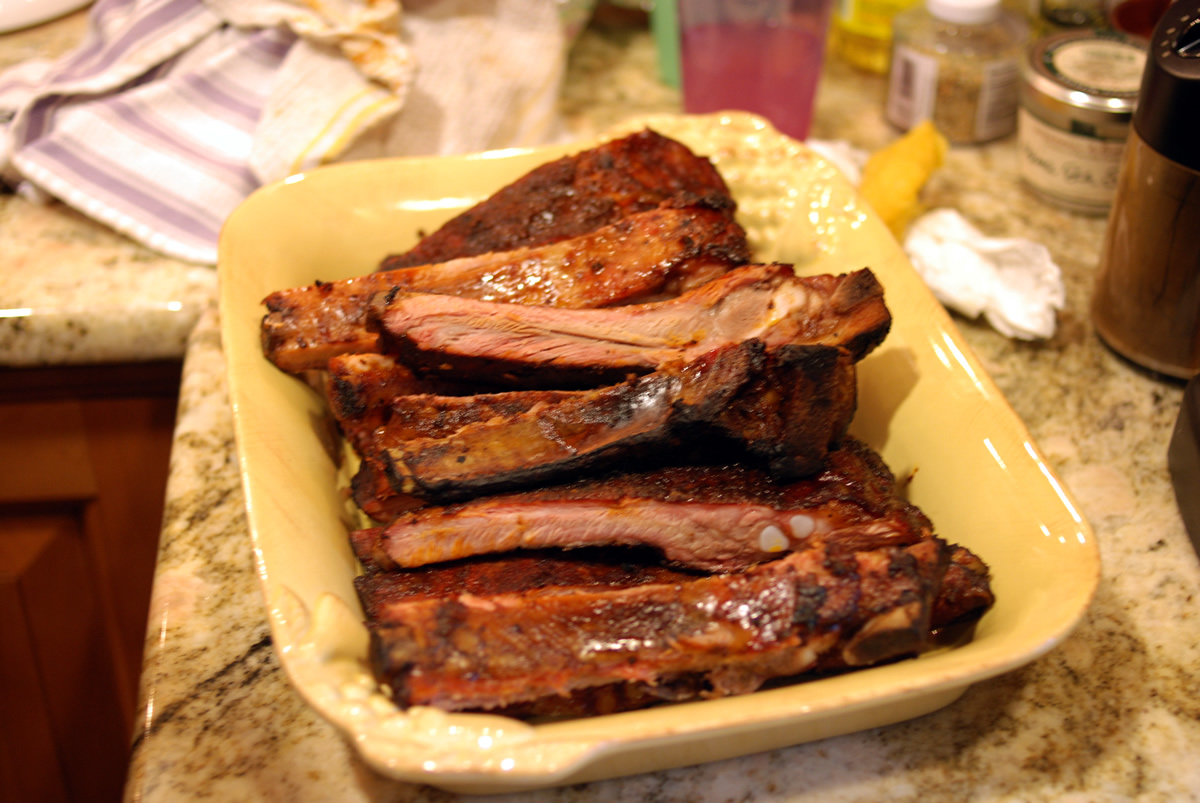 I don't want you to think that you shouldn't cook baby back ribs at home.  That's the beauty of cooking at home; you can make pretty much anything you want!  Baby backs are a good choice if you want a quicker meal and less fatty ribs.  You can apply any of these cooking techniques to either baby back or spare ribs.

Before cooking, remove the tough membrane that runs along the length of the bony side of your rack of ribs.  This isn't hard to do.  Just work your knife under the membrane along one of the short ends of your ribs.  Once you have about an inch of it loose, grab that end with a paper towel or a lint-free cloth towel and pull back and away.  The membrane should come off in one piece.  If it doesn't, use your knife again to loosen up another little flap and then pull.

This is a necessary step in cooking ribs.  The membrane is impermeable.  That means that nothing gets through it.  If you leave the membrane in place, no matter how much rub you put on that side, no flavor is going to get through that membrane.

Probably the most authentic pit master way of cooking barbecue ribs is to smoke them first and then finish them on the grill.  Either season simply with some salt and pepper or pack on your favorite rub. (If using a rub, wrap the ribs in plastic wrap and let them rest in the refrigerator for up to 12 hours).

Once your ribs are seasoned to your liking, smoke them between 200-225F until you can rotate a rib bone slightly, about 4 hours, give or take, depending on how large your ribs are.  If you can't rotate the bone, then the connective tissue has not broken down enough.

Once the bones are a bit loose inside the meat, you can finish them off on the grill over medium-high heat.  Now is the time to slather on your favorite barbecue sauce, unless you want to cook the ribs dry, or without sauce.  In that case, simply serve some sauce on the side, and make everyone happy.

You can also go ahead and eat the ribs as is, without grilling them.  Just baste on some sauce during the last 30 minutes of cooking. But, if you want some caramelization, you're going to have to take them to the grill.

The ribs should only need a few minutes on the grill on each side.  Remember, they are already cooked from the smoking.  Grilling will add just a little bit of char and, if you are using sauce, the heat will caramelize the sauce and thicken it for a really finger licking, lip smacking barbecue.  There is a fair amount of sugar in most barbecue sauces, so watch carefully.  Sauced ribs can turn from succulent to carbonized in a very short amount of time!

One down-side of this method, especially if you are cooking baby back ribs, is that the meat can have a tendency to dry out.  Keep the heat in your smoker low and don't let them overcook to help minimize the chance of dryness.

With the 3-2-1 method, you are sure to end up with moist and tender ribs, because during the two hours the ribs are wrapped in foil, they are steaming in their own juices.  The times are specifically for spare ribs, so if you're cooking baby back ribs, reduce the first time from 3 hours to 2.

What If I Don't Have a Smoker?

You can turn your charcoal grill into a smoker if you will only be cooking 1 or 2 racks of ribs.  It's pretty simple, really.  Aside from your normal grilling gear, you will need:

But I Don't Have Time for All That

Six hours is a huge time commitment.  And making your own smoker might seem like growing your own mustard plants so you can make some Dijon to go on your ham!  Granted, you don't need to be standing right over the smoker the whole time, and your neighbors will spend most of the day salivating over the amazing smells coming from your back yard, but as much as I like to do things the authentic way, sometimes I just don't have the time.  So then what?

Using your oven won't give you the traditional smoke flavor, but it will shave a few hours off of prep time, and you can always add just a touch of liquid smoke to your marinade.

This is an unconventional method of cooking ribs, and I can almost guarantee you that you will never find this at your local barbecue shack, but you can't beat this method for walk-away ease and tender, fall-off-the-bone ribs.

The ribs will be done in 6-8 hours.  They won't be the kind you can pick up and gnaw off the bone.  As a matter of fact, the meat will probably fall off the bones while you're trying to get them out of the crock pot!

Purists would say Bert's method isn't barbecue at all but if you are in a hurry and want some delicious steamed/grilled ribs, this is a great alternative. I have made these ribs many times on weeknights when I don't have 3 hours to slow cook with smoke.

In Bert's method, ribs are seasoned and cooked covered with the contents of a bottle of a beer. In the past I have said they are braised, but looking at it more closely, I would say the ribs are steamed and not braised because of the amount of liquid used in the cooking process. To read my post on this process, check out Bert's Barbecue Baby Back Ribs.

The bottom line is that you're never going to have really moist, tender "barbecue" ribs in under 2 ½-3 hours.  Ribs have a lot of connective tissue, and low, slow moist cooking is absolutely necessary to make the collagen break down into gelatin without having the proteins seize up like they would at high temperatures.

Yes, you can braise/steam first and grill second and even use a little smoke, but is that really barbecue. I guess it depends on where you are from and what you grew up with.