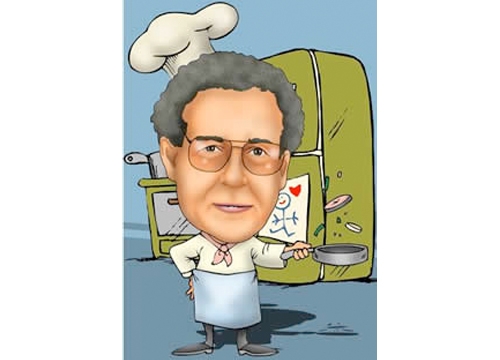 Chef Garrett contacted me in an email and said he would interested in participating in my new Ask A Chef feature. After reading about his background, I was excited to have him on board. What is most interesting to me is becoming a chef was Terrell's second career after spending 26 years as a hospital administrator and corporate staff manager for a hospital management company in Louisville, Kentucky.

After leaving that career, he "immediately enrolled in a culinary degree program at one of The International Culinary School at The Art Institute of Houston, an 18 month program that I completed with honors in 15 months, primarily due to having cooked most of my life."

During the 3rd and 4th terms he was required to complete an externship at one of several local restaurants, so he gained a lot of firing line experience while working at the Brownstone, a very upscale house for 6 months.

After graduating with an Associates Degree in Culinary Arts, he was offered a full time job as Garde Manger and worked there for 2 ½ years learning as much as he could  before moving on to the Downtown Executive Inn, a much larger kitchen that even had a 3000 sq. ft. smokehouse.  The Brigade system was well established there and over the next 2+ years worked each of the line positions.

When he learned all he was going to without promotion to the Sous Chef position, the executive chef helped him find a job as Executive Chef and General Manager at Marathon Oil Company's headquarters in Houston. He ran a cafeteria that fed 1500 employees at lunch and 250 in the Executive Dining Room. He had a staff of 41 including 3 chefs, 4 line cooks and assorted others.

After that he moved back to Tell City, Indiana and got the job of Executive Chef and General Manager of the local
country club, a small 9 hole club with a small but steady clientele in the restaurant.  He worked there for 3 ½ years until a back injury forced my retirement in 2005.

Wow! That was some second career. Now you can see why I'm excited to ask him questions and answer some of yours.

Here's what he said when I gave him my Novice to Pro interview.

Since I was 6 years old. I watched my grandmother while she cooked and bugged her to death with questions, so she started teaching me. I was soon making scratch biscuits , cornbread and cooking a pot of beans. She was a great cook, very innovative and experimental. She cooked in restaurants and hotels for 40 years and had quite a reputation for great food.

What made you decide to become Professional Cook?

My wife informed me I was not going to stay home and become a couch potato when I retired from Humana. There was an Arts Institute School 4 blocks from our house so I visited and talked with the fellow running the culinary program. He is a graduate of the New England Culinary Institute and a Master Chef and I liked his continuum.

It was modeled after the NECI program. He had only been in business there for 6 months and he strongly encouraged me to enroll, so I became a member of his third class. I wound up graduating with the second class due primarily to my previous college and my long time experience in cooking. While in school I simply fell in love with the profession.

The Arts Institute of Houston Culinary Arts Program. It wasn't at all difficult for me. I did have fellow students who struggled mightily with the training, especially the Mystery Baskets that were required at the end of each month. I found them great fun but others sweated with them.

Absolutely!! It was a fun experience and validated every thing I had learned during my life of cooking as an avocation.

Build a good basic library of cookbooks. I have 6 or 8 that I think all home enthusiasts need. I believe they are essential to become a good home cook. (I can provide the list if you are interested.)

First and foremost learn good knife skills and obtain a basic set of good knives. You can never be successful without both. Learn what mise en place means and follow its principles faithfully.

What is the most difficult aspect of cooking for you?

I hate to sound cocky but I can't think of a thing I find difficult about preparing good food.

Do you follow recipes or make it up as you are cooking?

I use recipes to give me ideas and a foundation to build on in creating my own dishes. With the exception of Pacific Rim cuisines I don't follow recipes.

Stir fry. I have a strong interest in Pacific Rim cuisines, especially Vietnamese.

My Microrasp grater. It's a wonder in grating, especially citrus zests, nutmegs etc.

It wasn't funny at the time, but looking back on it now, we laugh about it. My wife's boss hired me to cater her employee Christmas party in 1995 and she specifically requested roasted beef tenderloins with a special sauce and marinade.

I set up 2 gas grills and an extra cooker for sides. So I had 3 propane tanks all securely hooked up, (I thought) and had the grills lit to heat up because I was going to flash sear the tenderloins. I went inside to get a drink and enjoy the party for a while, when all of a sudden someone banged on the door and screamed, "You're setting the building on fire."

We all rushed out and one of the tank hoses had come loose and was spraying fire everywhere. We quickly kicked the tanks out to the street gutter and got the fire quelled just in time. The cooler in which the tenderloins were marinating had caught on fire and melted in a puddle of plastic and completely burned up the tenderloins.

I lost 2 grills, a turkey frier, 3 tanks, a very good cooler and 12 expensive beef tenderloins. We went quickly to a local grocery with a good deli department and fed everybody. Whew!!!

So many, but if I have to pick it would be pork tenderloins with shrimp a close second.

What do you eat at home?

We eat a lot of pork in various guises, soups and I usually have a pot of beans on the stove to heat up, pintos, great northerns, kidney, black, we're not choosy. I just really like dried beans and cornbread.

A Vietnamese barbequed pork strips called Shao Bui. It is outstanding and a very versatile dish. It can be used in so many other dishes as the meat ingredient, such as won tons, steamed buns, a soup additive, etc.