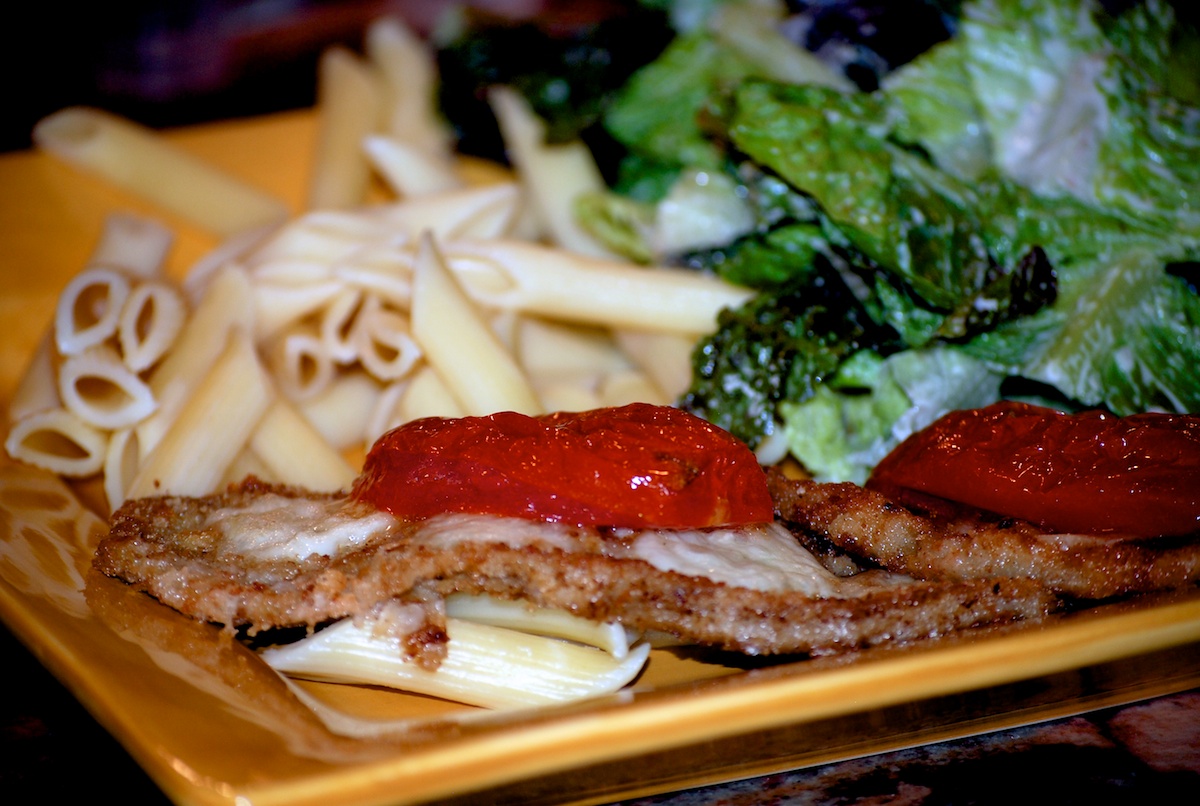 A Classic Eggplant Parmesan Recipe with a Little History Lesson

I love eggplant Parmesan and I have prepared it many different ways - in sauce, by itself, thick, thin, different types of cheeses. I don't care. Give me fresh eggplant fried just right with a good tomato sauce and I'm happy.

The version below is from my friend Chef Mark Vogel. When he made this dish at home a few weeks ago, he call me the next day and told me how good it turned out and he had to write an article about it.

Everybody's had the prototypical eggplant Parmigiana, (a.k.a. eggplant Parmesan), in run-of-the-mill Italian eateries, or worse yet, your average American pizza parlor.  It's always the same:  thin, mushy slices of eggplant, sparingly dotted with cheese and slathered in a dubious sauce.  It's about as texturally inviting as a productive sneeze.

I say it's time to reclaim eggplant parmigiana; to return it to its former glory:  properly cooked but not squishy pieces of eggplant with a crisp crust, adequate cheese and a deeply flavored tomato sauce.

It's actually amazing how much you can learn about cooking from a dish as seemingly simple as eggplant parmigiana.  I say "seemingly simple" because for the cook who is striving for perfection, there's much more to it than just frying some eggplant, adding sauce and cheese and throwing it in the oven.

There are a number of nuances to its preparation that if ignored, results in the listless, limp, neighborhood-pizzeria rendition all too common in the American culinary landscape.

What's In a Name

First let's clear up some terminology issues.  In the loosest definition, "Parmesan" and "parmigiana" have come to mean dishes that are made with cheese.  More precisely it should be Parmesan cheese but basically any dish or sandwich buried by mozzarella is nowadays referred to as Parmesan or parmigiana.

Whether it actually contains real Parmesan is up to the discretion of the chef, or the budget of the owner.   Parmesan in turn refers to Parma, the glorious city in Emilia-Romagna and birthplace of Italy's "king of cheese."

Parmigiana is an alternative and more authentic spelling for Parmesan.  However, eggplant parmigiana was never supposed to embrace either term or their shared meaning.  Parmigiana is a corruption of palmigiana or parmiciana, depending on who you ask.

Both of these latter words refer to overlapping pieces of wood, or a shutter, which is supposed to resemble the overlying slices of eggplant in the baking dish.  OK, now that the linguistic portion of the session is over, let's start cooking.

I Want a Crisp Coating with Tender Interior

As stated, my primary goal when making eggplant parmigiana is to produce eggplant with a crispy coating and a soft but not mushy interior.  This is achieved by

- using the freshest eggplant possible
- slicing them a little bit thicker
- salting them to remove excess fluid
- breading them properly
- pan-frying them correctly
- I know this heresy for many but NOT baking it in the tomato sauce.

The first step is choosing your eggplant and treating it right.  In addition to the traditional, egg-shaped eggplants ubiquitous to American supermarkets, there are many other kinds of eggplant.  Italian eggplant look like a smaller version of the regular ones but have a more delicate skin and texture.

Japanese eggplant are oblong and slender, are often brighter purple, and have a sweeter flesh.  There's even a white eggplant which sports a tough skin but smooth flesh.

Whatever variety, choose eggplants with a firm, smooth, unblemished skin devoid of any soft spots.  Use eggplants as soon as possible.  They don't last long even in the fridge.

Because they're a tropical plant they don't take well to cold.  So while I prefer the standard eggplant or the Italian variety for eggplant parmigiana it's most important to acquire fresh specimens and use them promptly.

To peel or not to peel?

It's up to your personal taste.  I prefer mine peeled.  Some cooks profess that leaving the skin on helps hold them together but you can make very soggy eggplant even with the skin.  After peeling I slice them a half-inch thick.  I prefer to cut them lengthwise but you can cut them crosswise into discs.  What's most vital is not only the thickness, but the uniformity.  Unequal slices will produce disparate textures within each piece after cooking.

Next, lay the slices on a cooling rack on top of a sheet pan.  Generously salt both sides of the eggplant with kosher salt.  Use a liberal amount of salt as you'll wipe it off later.  Allow the slices to rest for 30-45 minutes.  This draws out their moisture and will improve the final texture.  After they have rested, press each slice between paper toweling to squeeze out more water and wipe off the excess salt. 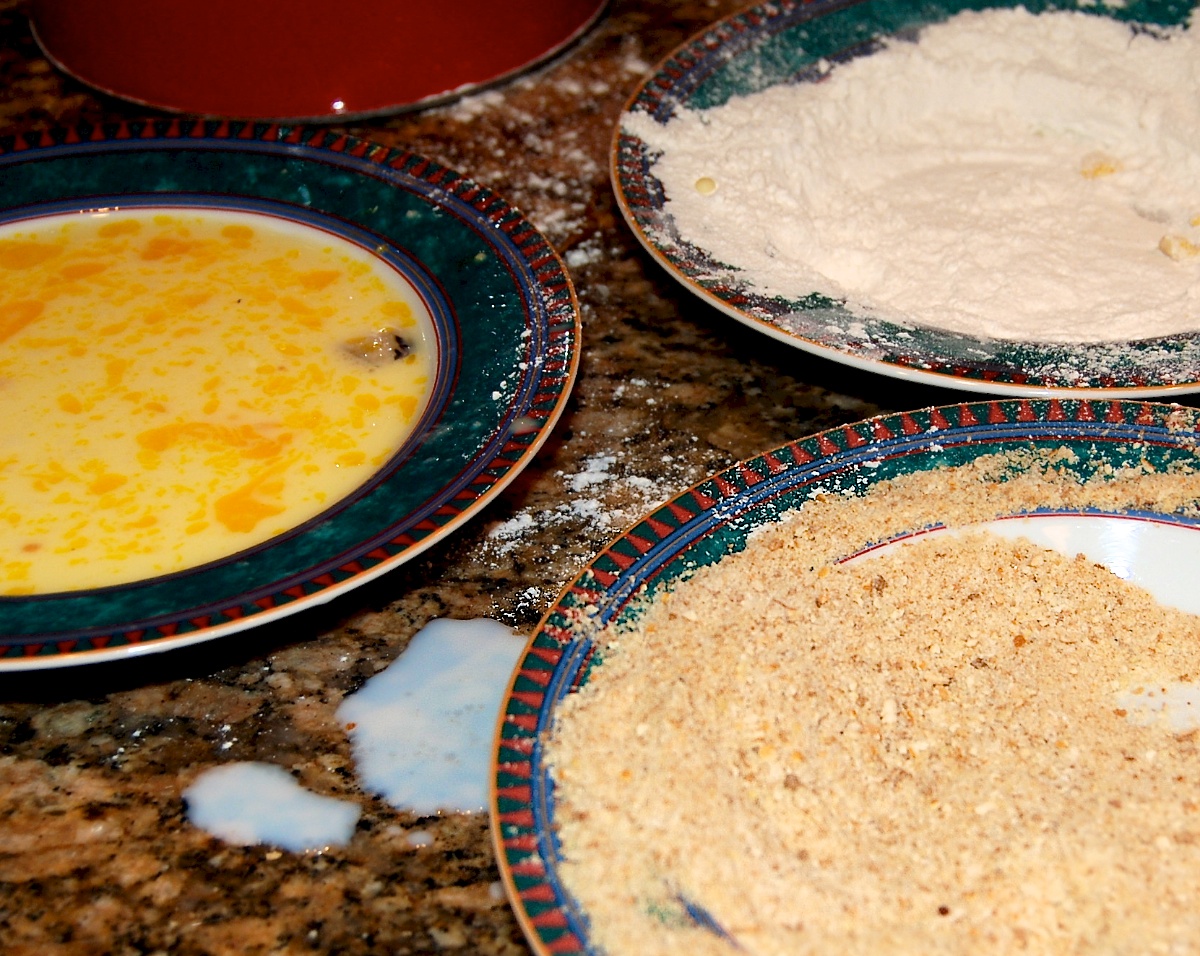 On to what's known in the culinary world as the "standard breading procedure," which is dipping the food in flour, then beaten egg and finally breadcrumbs.  Shake off the excess flour before introducing the food to the egg.  Too much flour and the breading can dislodge.  I prefer panko breadcrumbs which have a coarser texture.

I use a roomy bowl with ample breadcrumbs so I can grab small handfuls of them and press them into the eggplant.  Place the breaded slices on a baking sheet to rest as this also assists in the adherence of the coating. 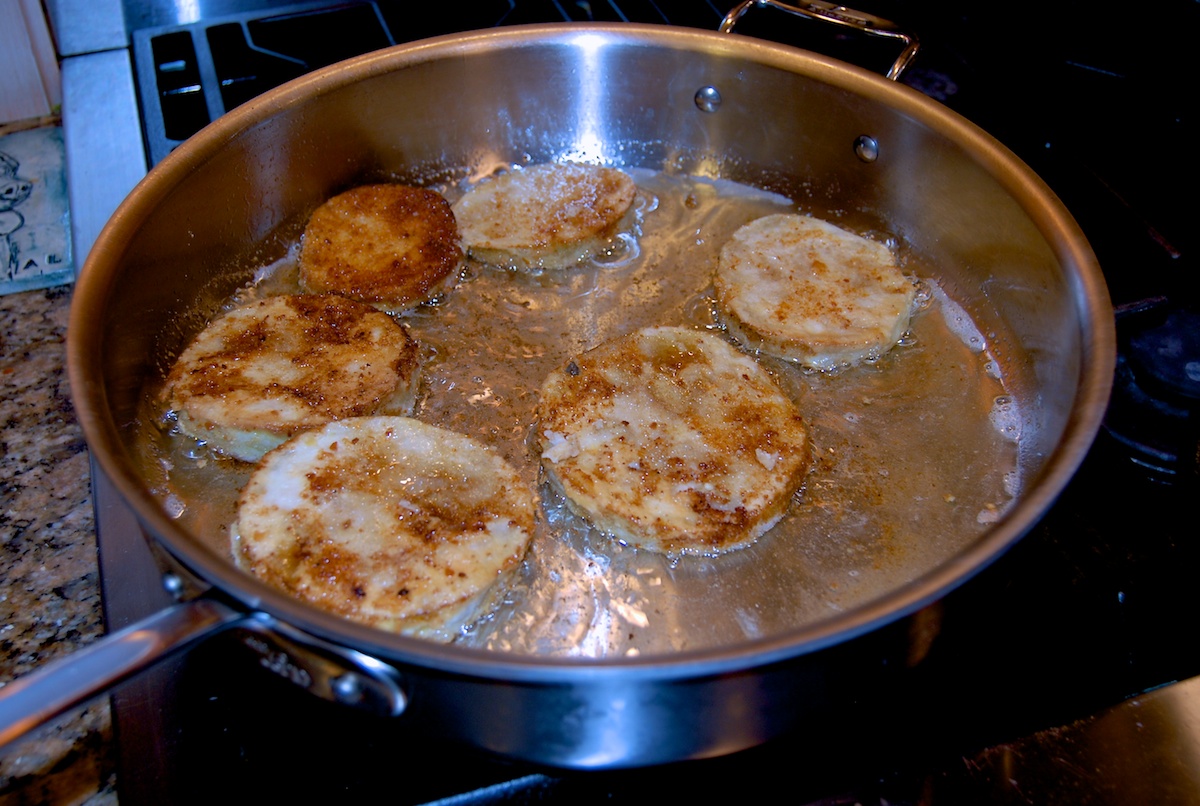 Next add oil to a large skillet.  Eyeball it so there's at least enough to submerge the slices halfway.  If you're not sure, erring on the side of a little extra won't hurt.  Heat the oil until it shimmers or to a temperature of 350ËšF.  If the oil is not hot enough the breading will absorb too much of it and get soggy.

Conversely, do not let the oil get too hot or you risk burning the outside of the eggplant before the center is cooked.  Place the slices in the oil.

Work in batches and do not overcrowd the pan.  As soon as the first side is thoroughly browned, flip it and brown the other.  Remove the slices to paper toweling to drain and season with salt and pepper. 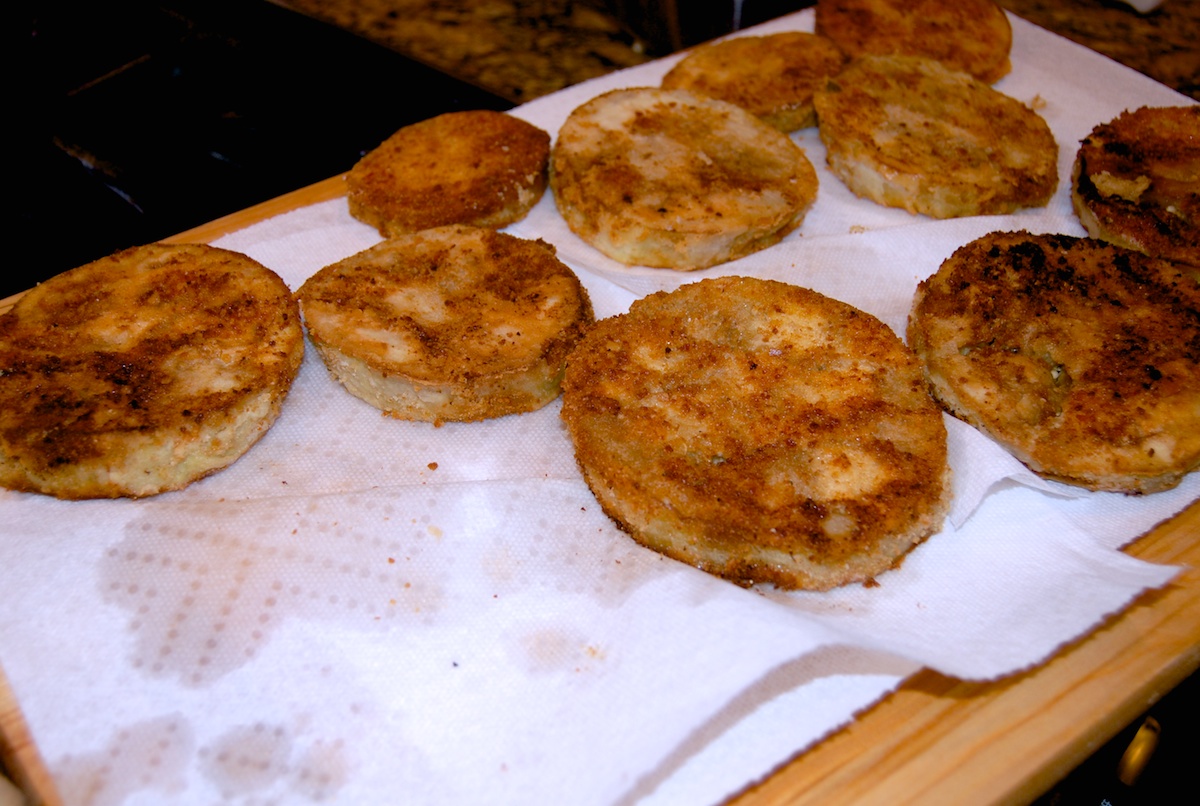 Preheat your oven to 375°F.  Spray a clean baking sheet with vegetable spray.  Arrange the eggplant slices on the sheet without overlapping them.  Use additional trays if needed.  Take shredded mozzarella cheese and pile the desired amount on each slice of eggplant.  Use a little more than you think you need.

Place the eggplant in the oven just long enough to melt the cheese.  Make your tomato sauce separately.

Place the finished eggplant slices on your plate and sauce them at the table.  This will ensure crisp eggplant.  Cooking them in the sauce moistens the crust and defeats the whole purpose of frying them in the first place. 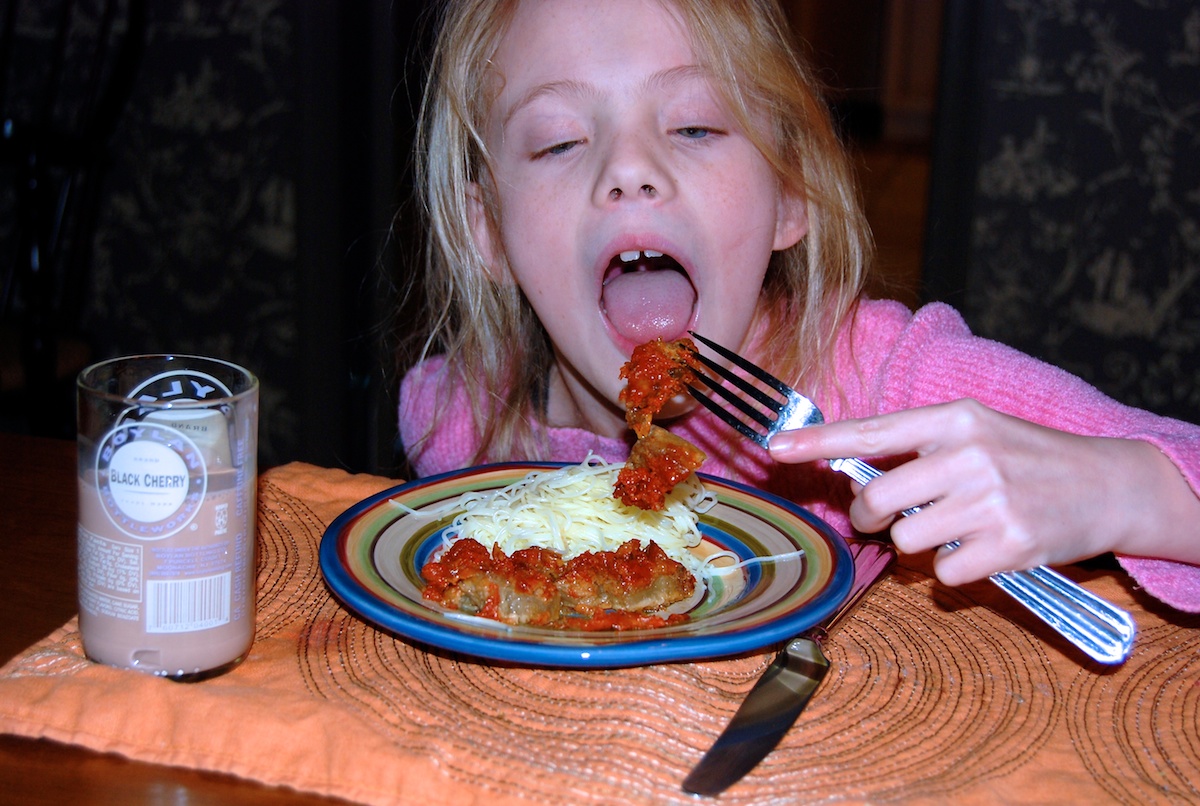 I have a nice tomato sauce recipe from my friend Chef Ricco DeLuca but tomorrow I'll post another one from Chef Vogel for his favorite simple tomato sauce. We talked the day after he tested this recipe at home and said the sauce was incredible.

I'm sure you have your own favorite recipe for making tomato sauce and by all means use it but if you are looking for something different, give Ricco's or Mark's a try. I also wrote a post about a few celebrity chef's favorite tomato sauces and how they differ slightly.

And you you are in a hurry and need a shortcut, you can always use a favorite commercial brand but I can't imagine it will be as good as homemade. Not much is.