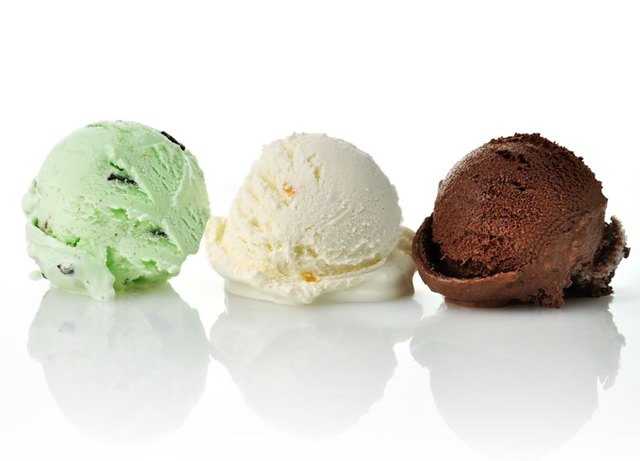 I celebrated a big birthday at the beginning of the month and my wife invited some friends over including my neighbor who gave me a Cuisinart Commercial Quality Ice Cream & Gelato Maker (ICE-100) as a birthday present.  This past weekend, my youngest daughter and I put the kit to use and made strawberry and chocolate macadamia nut gelato. To our delight, both gelati flavors turned out smooth and delicious.

Aside from, “what’s your favorite ice cream flavor?” the first question everyone asks me is,  “what is the difference between ice cream and gelato?” If you don’t know the answer to this important life question, you are not alone. I decided to get to the bottom of this dilemma and here’s what I found.

Ice cream and gelato are very similar in both taste and texture. A lot of people say that gelato is just a fancier a word for ice cream. In a way, those people are right. Yet the two creamy treats do have important differences.  Gelato and ice cream call for the same ingredients yet use different proportions in their recipes. Also, the way in which the components are combined differ slightly.

The first obvious difference between the two is that gelato hails from Italy, and is closely tied to the region of Dolomite in northern Italy. Gelato is the Italian word for “frozen.”  Americans absolutely love frozen sweets of any kind and we have adopted gelato as if were our own creation. We love to treat ourselves to custard, water ice, sorbet, frozen yogurt, the list goes on.

According to Progressive Grocer, Americans spend close to $25 billion on ice cream and ice cream affiliates a year! But Ice cream and its Italian cousin, gelato, seem to be what we crave the most.

The technical differences between these two frozen treats depend on three basic factors:  fat content, air, and temperature.  Both ice cream and gelato have a specific base and texture that leads to a pleasing mouth feel when eaten. Let’s break this down.

The source of richness in gelato and ice cream comes from their milk fats.  When you bite into one of these frozen desserts, milk fats are responsible for the creamy smoothness you taste. Ice cream’s fat content is higher because it is typically made with more cream and less milk. On the other hand, gelato is composed of more milk – making it significantly lower in fat.  Also, gelato tends to stay away from egg yokes and if they are ever added, they are added very sparingly.

The varying textures between a scoop of vanilla ice cream and a scoop of vanilla gelato will tell you that the churning processes differ between these deserts. Commercial Ice cream is churned extremely fast, which adds volume to it and gives the base a light and airy texture. Conversely, Gelato is slowly-churned, making it denser and harder to melt. However, the at-home gelato and ice cream makers usually church at one pace.

How Hot is Your Ice Cream

Lastly, you may never have noticed this, but ice cream and gelato have about a 10-15 degree temperature difference when served. Ice cream is usually served at 10 degrees Fahrenheit, but because gelato has less air and fat consistency, it is served at a warmer temp. If ice cream was served at the warm temperature of gelato, it would quickly turn to soup due to its extremely fluffy texture and high fat content. When we made the gelato this past weekend, we combined the cream and milk to simmer over heat, something you wouldn’t do when making homemade ice cream.

What About Adding Eggs?

To further complicate the world of creamy desserts, there are also ice cream and gelato custards. These recipes use egg yolks to create an ultra-creamy and custardy flavor. Heavy cream and egg content makes custard the highest in fat of all three varieties.

Overage: This word simply means the air incorporated into the creamy mixture when produced. Commercial ice cream can have as much as 50% air whipped into its base while gelato has, at most, 30% churned into its’ ingredients.

Fat: Gelato typically contains between 4-6% fat content while ice cream is never commercially sold with anything less than 10% fat. So, if you are concerned about fat content and are choosing between the two, go with Italian gelato.

Cost: On average, gelato costs 30-50% more than ice cream. Ice cream may be cheaper at the register, yet you are saving a few pennies merely to eat a lot of whipped air. Gelato is more densely packed and you will get much more out of it than store-bought American ice cream. Although a pint of gelato will have a bigger price tag on it at the grocery store than regular ice cream, when it comes down to it, you are actually paying the same amount.

Flavor & Texture: Because there is less fat and air in gelato, the flavors are richer than ice cream. Despite its reduced fat content, gelato has a wonderful creamy texture and will melt in your mouth. Ice cream, on the other hand, has an icier and frozen mouth feel to it.

Sugar: You may be wondering about sugar content in the two. The amount of sugar may vary depending on the recipe you are following for either ice cream or gelato. All in all, however, sugar content is not a huge dividing factor.

Regardless of these differences, both ice cream and gelato belong to the same delicious family of creamy treats. Why squabble over differences? Just pick up the spoon and enjoy.

Oh, and by the way, what's your favorite frozen treat?