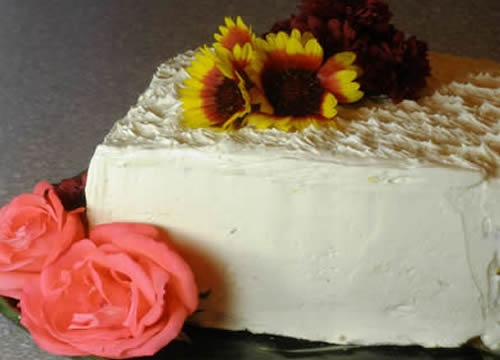 I received the following email from home cook Rhonda requesting a recipe for a buttercream frosting that would taste more like she has experienced at a bakery. Here is what she said,

"I am a stay at home mom that has looked everywhere for the real sweet buttercream frosting that the bakery uses.  I have looked on-line, cook books and none of the recipe's are right.  The kids love helping me make cakes but they only like to decorate them.  They do not like the frosting.  If you have a recipe I would love it.  I will keep trying until I get the right one.  I hope you can help. Thank you, Hi Rhonda!"

I immediately sent her request to my friend Chef Jenni Field, a professional pastry chef who graduated from Orlando Culinary Academy with her own blog called Pastry Methods and Techniques. Jenni asked for her original recipe that you can see below and offer her the following comments and recipe.

I'm sure it must be frustrating to have fun decorating a cake with your kids only to have them refuse to eat it because they don't like the frosting! I personally like almost all kinds of frosting, but I will do my best to give you some recipes that your kids will enjoy.

You said that you are looking for a recipe that tastes like bakery frosting. Unfortunately, there are many bakeries, and most of them use their own "special recipes."

It might be difficult to pinpoint the style of frosting you're looking for, but I'll give it a shot. Thank you for sending in the recipe you used. This gives us a place to start.

This recipe is your basic Wilton-style American buttercream. The texture can be kind of fluffy but a little bit gritty since it is based on powdered sugar.

Powdered sugar contains some corn starch to keep it from clumping, and sensitive palates can pick the raw starch flavor up. Even if you don't taste the raw starch, the texture is unmistakable"”barely gritty if you rub a little between (clean) fingers.

Many icings are based on this basic American fat + powdered sugar + flavoring formula, including one of my favorites, cream cheese frosting. So, I won't even linger at the standard American counter. Let's wander over to another counter.

I found a modification of the standard American buttercream in The Whimsical Bakehouse by Kaye Hansen and Liv Hansen. I've made this before, and it is pretty tasty. The use of boiling water cooks out some of that raw starch flavor, and the resulting texture is much smoother.

If you are looking for a completely smooth and silky buttercream, look toward the European bakery counter. Europe is the home of egg-based buttercreams. The texture is light and ethereal, and the flavor of pure butter comes through.

These frostings are a bit rich and not always considered "kid frostings", but since I don't know your kids' taste, I'm offering these as possibilities, as well.

All of these frostings are based on whipping either egg whites, whole eggs or egg whites together with a 240-250 degree, F, sugar syrup until cool. Then, butter, salt and flavorings are whipped in.

I think that this last type is the most kid-friendly version.

I hope that one of these two frosting recipes will get you close to your goal of having your children eat what they decorate!

For the House Buttercream

To Make the House Buttercream

This icing will get spongy on standing, so re-whip before icing. Italian buttercream keeps nicely in the refrigerator for up to 2 weeks. If you do refrigerate it, make sure to bring it up to room temperature before whipping, or it will curdle. I have successfully saved buttercreams (when I've been too impatient to wait) by rubbing the outside of the bowl with a hot, wet towel. Don't be like me, though. Let it come to room temperature. You can also make a lovely chocolate variation by whipping in 2-4 oz. (this depends on how chocolaty you like your chocolate frosting) good quality chocolate, melted and cooled.
« Pan Roasted Rabbit Recipe
Bratwurst with Sauerkraut & Mustard Recipe »