Ok, I'm 3 for 3 when it comes to recipes from the new cookbook, Marinades, Rubs, Brines, Cures & Glazes. I hope Jim doesn't mind me posting another of his recipes but this one I used on some tuna turned out great.

I highly recommend you check out his cookbook but don't take my word for it.

I was thumbing through the July issue of Bon Appetit and what do I find on page 32? A great review of Jim's new cookbook. Here's what they say,

"We love the dogged focus, the obsession with flavor, and the sheer exhaustive nature of this barbecue book. Marinades, Rubs Brines, Cures & Glazes: 400 Recipes for Poultry, Meat, Seafood, and Vegetables by barbecue wonk Jim Tarantino delves deep into the science and practice of imbuing as much flavor as humanly possible into grilled food.

And we're not talking regional American 'cue alone. He hits the Caribbean, North Africa, Asia, and every other corner of the globe in the recipes. This guy's deep - mops, sops, gastriques, sugar substitutes, and flavor amplifiers with a thoroughness and enthusiasm rarely seen in a barbecue book."

Normally, I wouldn't do anything to fresh, never frozen tuna but sear the outside of it and serve it up with maybe a little wasabi & soy based sauce but this was different.

I was checking out a brand new supermarket in the area and they had some "previously frozen" tuna on sale for around $8.95 per pound. It looked good and they were selling it off a big chunk of fish, not as individual tuna steaks.

So I had the fishmonger cut me off a couple of steaks and decided to try another of Jim's marinades. I figured as long as the tuna was "previously frozen" I might be better off adding a little flavor. I looked through Marinades, Rubs, Brines, Cures & Glazes and settled on his Orange - Ginger Marinade.

I had most of the ingredients but not everything so there is a little alteration to the original but it still came out great. I also didn't marinate this for the 2 - 4 hours Jim suggested because as usual, I was late getting dinner started.

Again, it didn't seem to matter. My wife loved it and even my 6 year old enjoyed it, although we told her it was chicken. Funny how that works so often.  Here goes: 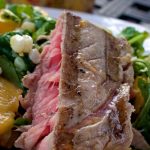 I served the tuna steaks with sautéed vegetables and a couple of artichokes we adventurously ate as a family. By the end of the meal there was butter everywhere. The time is not including marinating. Once again, thank you Jim for some amazing recipes.
« Grilled Marinated Skirt Steak
Sweet Corn Relish »