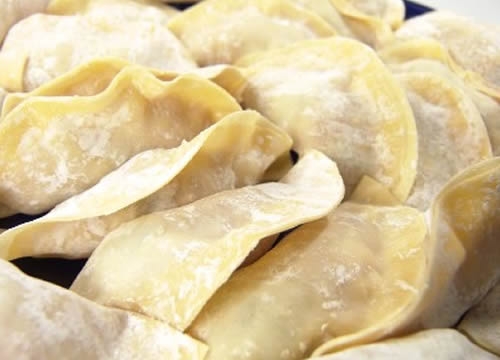 Learn How to Make the Best Chinese Dumplings

I wanted to learn how to make dumplings at home so I checked out her cookbook, Suzanna Foo Chinese Cuisine, and was happy to see not only how she makes dumplings but how she cooks them so they come out perfect. She describes boiling just made dumplings as well as frozen and then explains how to pan-fry them.

The technique is very similar to cooking fresh pasta with a few unique twists. For example, you want to use a lot of water when cooking both pasta and dumplings. Start by bringing a big pot of water to boil, add your dumplings, then immediately stir them so they don't stick together.

Bring the water back to a boil and as soon as the dumplings start to float to the top, add ½ cup of cold water. The reason for this has to do with the filling inside. Most likely inside is still raw so you add the cold water to slow down the cooking process of the dough so it doesn't break apart while allowing the filler to finish cooking.

Continue to cook until those wonderful dumplings start floating again. Now it's time to taste one to see if they are done. They should be done at this point but if not, just add another ½ cup of cold water and wait till they float again.

When done, remove them from the pot with a Chinese strainer or a slotted spoon. Be careful not to place them on top of each other or they will stick and break apart.

Again, when they start to float they should be done. Taste and if not done, add some more cold water and wait until they float again. When they are done, strain and serve with your favorite dumpling sauce.

If you pan-fry a dumpling, they are called Pot Stickers. Why? Because when frying, the bottom sticks to the bottom of the pan making them crisp and delicious. Also, when pan-frying dumplings, you don't want to cook frozen ones. You want to be sure to defrost them or they will burn.

In a large nonstick pan, add a tablespoon of corn or vegetable oil and heat it up. Add as many dumplings as you can that will fit into the pan in a single layer without a lot of touch feely going on. Now for the interesting part.

Add ½ cup of cold water to the pan over the dumplings, cover and cook on low heat for 10 minutes. Don't even think about flipping them or checking them out. Let them cook until all the water is cooked off and the dumplings are golden and crisp on the bottom.

If they are not golden and crisp on the bottom, continue to cook until they are. When done, remove and serve or start another batch.