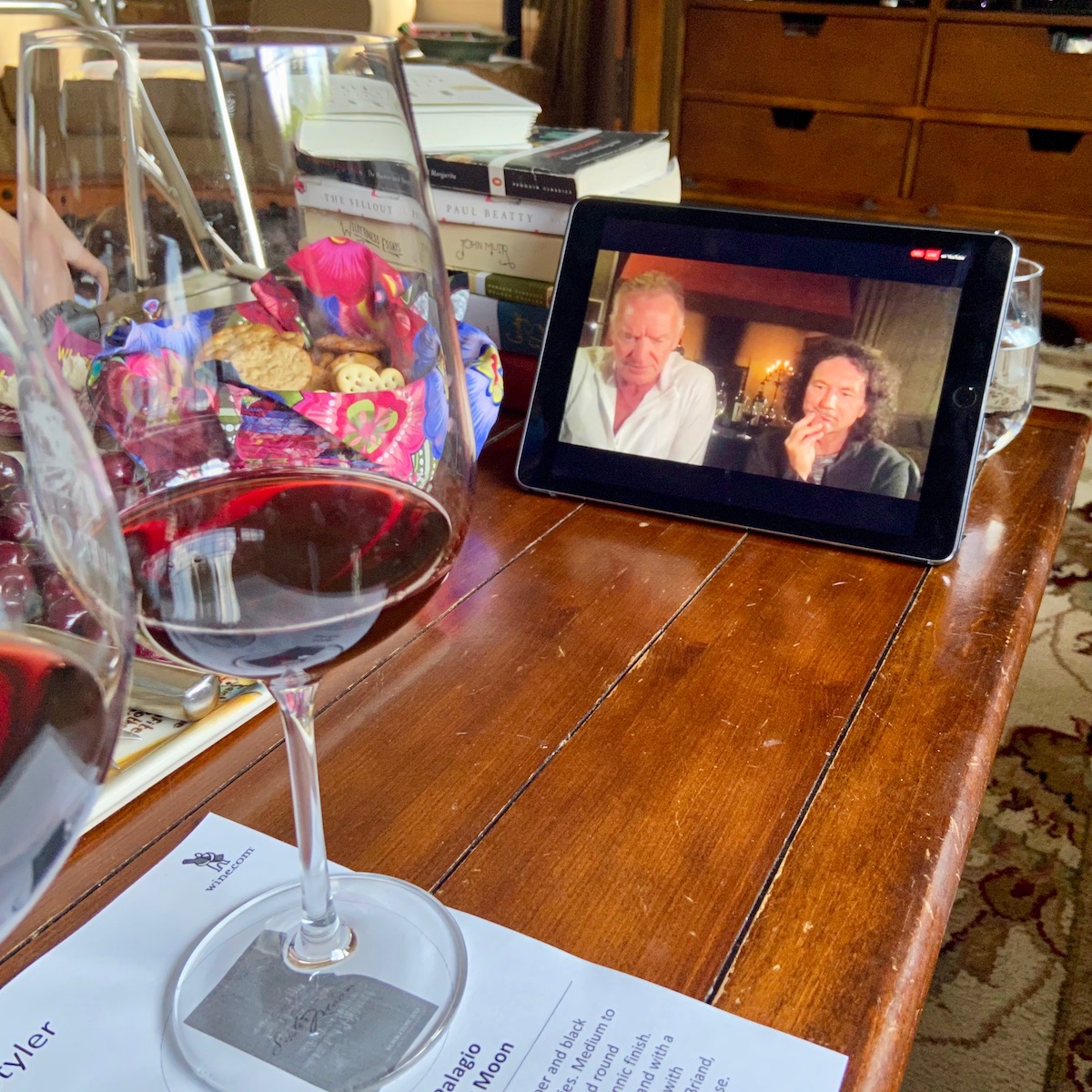 Our Virtual Wine Tasting with Sting and Trudy

With all that’s going on these days, my wife has been looking for fun things to do while at home. This weekend she signed us up for a live-streamed virtual wine tasting with Sting and his wife Trudie Styler.

A big fan of The Police and Sting’s music, I thought it would be fun to hear what he knew about wines and the making of wines. I had no idea that he purchased the sixteenth-century estate in the Tuscan town of Figline Valdarno, just south of Florence and started rebuilding the vineyards over 20 years ago.

Not only do Sting and Trudie grow grapes for wine, they also have olive trees and produce their own honey. And their farm is fully organic. You can read more about their estate at Il Palagio and learn how you can host your own special event there.

The event was hosted by Wine.com and viewed via a Zoom and the Wine.com YouTube Channel. A week or two before the event, my wife ordered the three bottles from the estate so they would be delivered in time.

There was one white wine and two red wines that I’ll talk about in a minute but the instructions on the day of the event were to chill the white in the refrigerator early in the day and remove 10 minutes before the call.

For the reds, they wanted them at cellar temperature which is usually about 55 degrees F so if they were at room temperature, they suggested putting them in the refrigerator for 15 minutes before we started.

They also suggested opening all the wines 30 minutes ahead of time and pouring them into separate glasses at the very beginning so they have some time to breath.  They sent us a placemat (below) that we could print out with the names of the wines and the winemaker’s description of each wine. It may have been Wine.com’s comments. Not sure.

The tasting was hosted by Gwendolyn Osborn, a wine educator and employee of Wine.com who did a fine job talking about the wines and asking Sting, Trudie and their winemaker Tony questions. The entire tasting lasted about 30 minutes although we continued tasting on our own when it was all over. 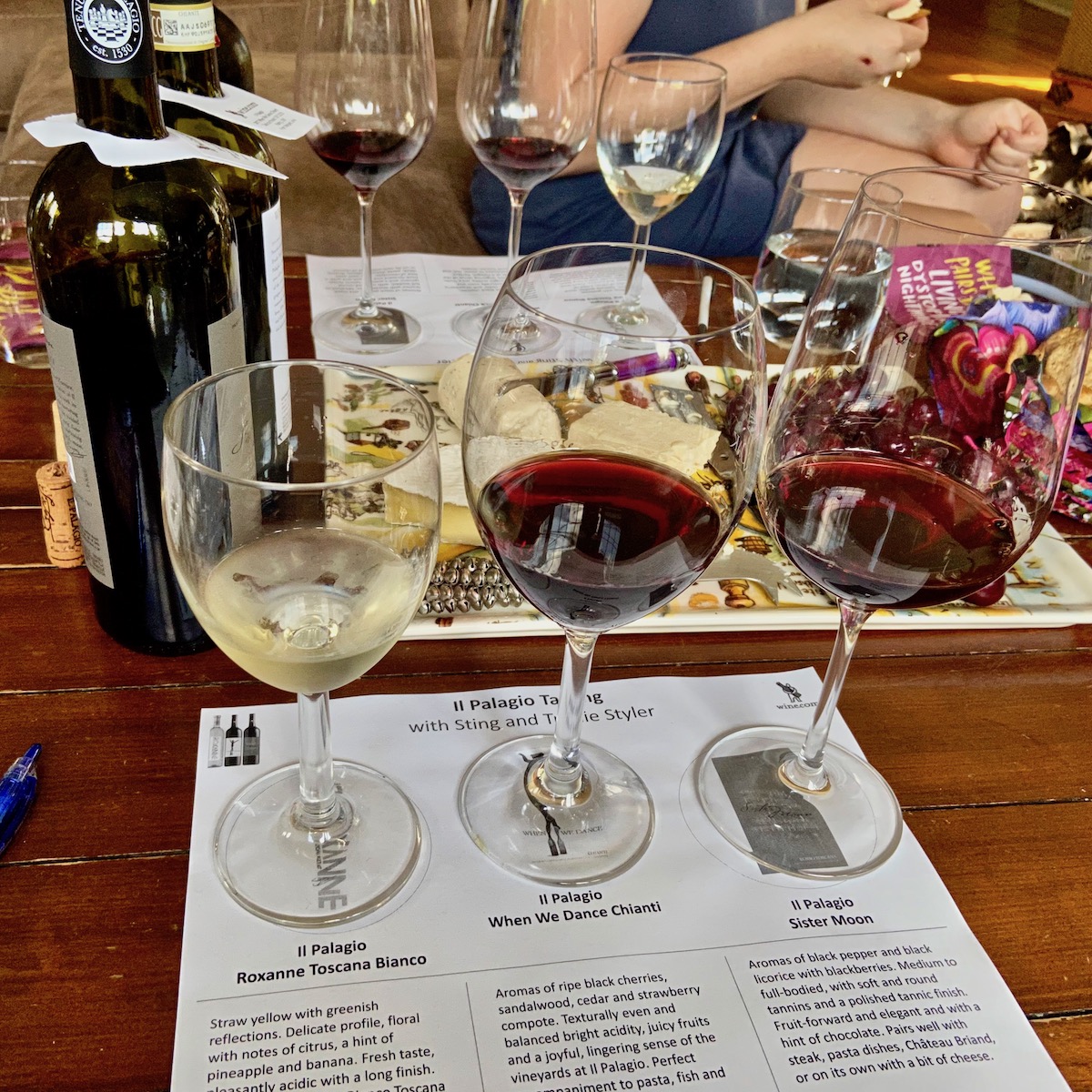 As I mentioned above, there were three wines, one white and two reds. Each of the wines were named after one of Sting or The Police’s songs.

The white is called Il Palagio Roxanne Toscana Bianco 2017 and is a blend of 95% Vermentino and 5% Viognier.

Side note, we all know The Police’s famous song Roxanne, but my youngest daughter who is now 20 was not familiar with the Eddie Murphy rendition in the movie 48 Hours. That night we rented the movie, a great movie I might say, so she could see the scene.

As you can see from the placemat, the Roxanne Toscana Bianco is straw color with a “delicate profile, floral with notes of citrus.”  I tasted the pineapple but not the banana. Everyone tastes wine differently so that’s OK.

We all really liked this wine and would buy it again. I’m a huge Chardonnay fan but there are times you want something lighter, more crisp, less oaky on a warm summer afternoon or evening.  In fact, Trudie said she likes this as a daytime wine because it doesn’t “lay you low too early.” This wine fits the bill.

Il Palagio When We Dance Chianti

The second wine was their red When We Dance Chianti and was described by both Sting and Trudie as a go to wine that is much favored in their household. It is comprised of Sangiovese, Canaiolo, and Colorino grapes.

For this wine, James Suckling said, “A go-to Chianti with lovely bright fruit and lemon-rind undertones. Medium body and a flavorful finish. From organically grown grapes.”

From the placemat notes, you can see it has the aroma of ripe black cherries, sandalwood, cedar and strawberry compote. I only wish I could distinguish all those smells but I did enjoy the black cherries and cedar aromas.

The first taste was bright and full of fruit flavors but both my daughter and I were not impressed with the finish. Sort of a weird taste in our mouths.

I had a feeling if we let the wine open and breathe for a few more minutes it would change and get better. And that’s exactly what happened. After trying the second red, we both went back and tried the Chianti again and the finish was delightful.

The second red and last wine was Sister Moon and my favorite. Sting talked about enjoying this wine while song writing and Trudie talked about how it made her feel “reflective”. I don’t plan to be writing any music any time soon, but I do like to be “reflective”.

The most expensive of the three, $60 bucks at Wine.com, this Super Tuscan consisted of 45% Sangiovese, 45% Merlot and 10% Cabernet Sauvignon.

Again, James Suckling, “A firm and silky red with blackberry, plum and light chocolate character. Cherry, too. Medium to full body, firm and silky tannins and a flavorful finish. Linear and focused.”

Robert Parker also had something to say about this wine, “The bouquet starts with candied cherry aromas and soon segues to light spice and dark plum. Even though the complexity of the bouquet is mild, the wine is beautiful, bright and buoyant at its inner core. Some 15,000 bottles were produced.”

As you can see from the notes, this wine has a wonderful black pepper and black licorice with blackberry aroma.  I would say it was more medium bodied with good finishing tanins with lots of forward tasting fruit on the tongue and yes there was a hint of chocolate.

I think because this was opened the longest while we tasted the other two wines, the finish was perfect. A little pricy for our pocketbooks, I would love to have this wine with a nice steak or a pasta with a heavy meat sauce.

Sting told a story about his earlier days on the road with The Police and then as a solo artist. He said whatever venue they played in, the venue or his manager or someone from the record companies would put very expensive wines in his dressing room. I think he even mentioned Petrus and Chateauneuf-de-pape.

At that time, Sting said, he was a beer drinker and left the wines for his roadies. A few years ago, he visited one of his roadies in New Jersey and was taken aback by his beautiful, large wine cellar filled with all these incredible and expensive wines.

When he asked his roadie where he got all these fabulous wines, his roadie said, “From your dressing rooms.”