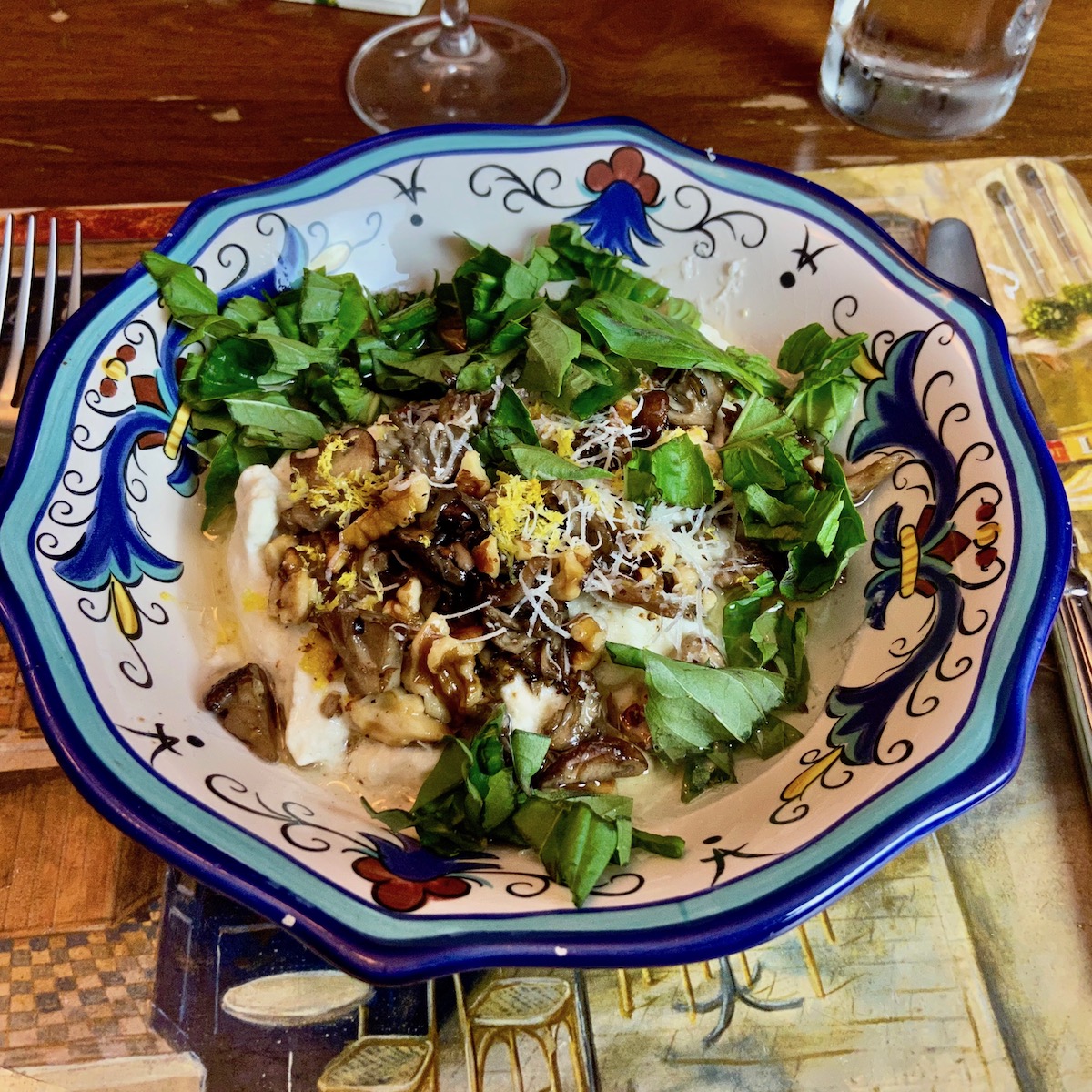 Is Gnudi the New Trend?

You know a food is trendy when you start to see it everywhere – on menus, in cooking magazines, at dinner parties.  Sun-dried tomatoes, quinoa, and kale come to mind as foods that have hit the spotlight for their 15 minutes of fame. Well, we think we’ve uncovered the next trend:  gnudi.

If you haven’t heard of it, no surprise, we hadn’t either until it showed up for us three times in the past week!

No doubt gnudi has been around forever;  Wikipedia describes it as “gnocchi-like dumplings made with ricotta cheese instead of potato, with semolina.  The result is often a lighter, “pillowy” dish, unlike the often denser, chewier gnocchi.”  But it’s new to us.

We first saw it in the Saturday edition of the Wall Street Journal, where a regular feature “Slow Food Fast” is typically found in the “Off Duty” section.  They featured a Ricotta Gnudi that we experimented with.  It was so good that we talked about it all through dinner.  (Details follow below.)

Then a few days later we headed to Sag Harbor, NY for an extended weekend visit with family friends we met through our daughter’s college experience.  They have a beautiful home right in the village with an expansive kitchen. 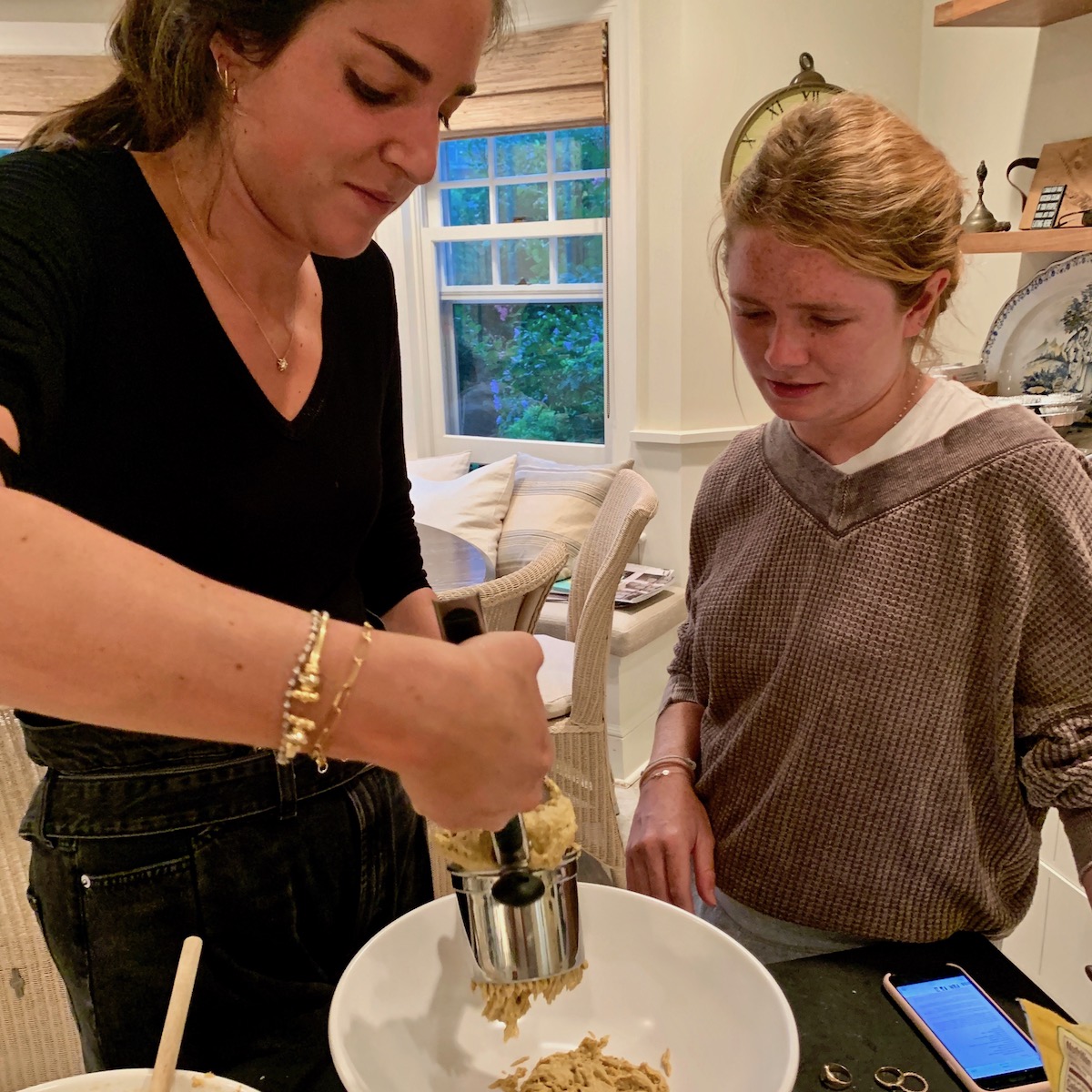 They are foodies like us, which prompted a cooking competition “Duke Dads vs. Duke Daughters” Italian style.  The dads went with the more traditional (but still delicious) Bolognese sauce with a few fancy additions like prosciutto and anchovies, while the daughters took a more experimental path after consulting with a friend who has cooked in a Michelin star restaurant in NYC.  More on that in a minute.

Those of us left out of the competition (relievedly so) picked up the slack on the dessert front and searched the recipes on RG to find a light Italian selection - Budino al Cioccolato, sort of a combo between chocolate pudding and molten lava cake.

It was the perfect ending to an exceptional meal because it was light in texture and “just enough” but not overwhelming.  Oh, and we also put together a simple Caesar Salad  just to cover all the food groups.

Back to the daughters.  They had committed to a dish with sage butter and butternut squash as featured ingredients.  Not sure how that showed up on the radar screen on a hot August day but, whatever.  They also wanted something that was a departure from pasta-and-sauce, to distinguish them in the competition.

So after the above mentioned consultation, they ended up roasting butternut squash with cumin (and maybe cinnamon?), mashing it with ricotta and Parmesan, cooking it by the spoonful for a few minutes in simmering water, then sautéing each in sage butter prepared with fresh sage from the garden and serving over blanched asparagus with a drizzle of the sage butter and topped with crumbled sage.

While they were cooking the squash-ricotta mixture, we commented that it reminded us of a dish we had cooked a few days earlier called “gnudi” and they confirmed that this was what their chef friend had called it.

Hmmm.  Small world?  Or new foodie trend?  Regardless, it was a delicious primi course for our dining extravaganza, followed by the Bolognese and the budino.  A great night of home-cooked gourmet fare. 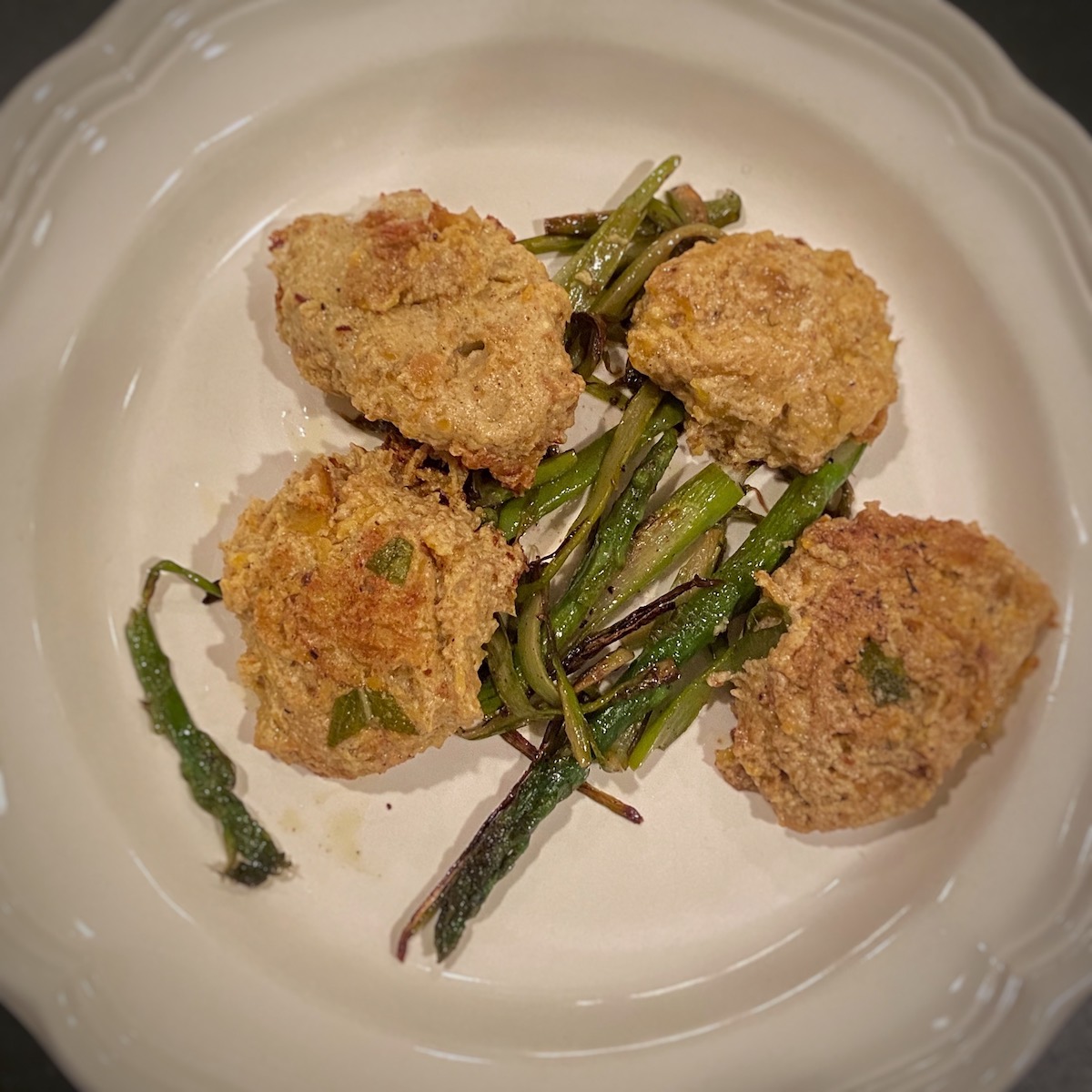 Two days after returning from our weekend visit, RG came across yet another gnudi recipe in the current issue of Food Network magazine.  OK, so probably a trend that we need to share with our fellow home chefs.

And here’s what is one of the great things about this dish:  it is really simple and quick to make and doesn’t require a lot of ingredients.  We adapted our recipe from that of Chef Douglass Williams as featured in WSJ and thank him for turning us onto some things we’ve never tried before.

Making the gnudi dough was easy, just ricotta, nutmeg, egg, grated pecorino-romano cheese and a little bit of flour all mixed together and then cooked in simmering water by the dumpling-sized spoonful.  Gnudi cook a lot like gnocchi in that you drop them into simmering water (as opposed to a rapid boil) in batches so they don’t clump together and when they float to the top they are done.

These are the “pasta” of the dish and are wonderful in and of themselves, but the real treat in this dish is the mushroom walnut sauce. 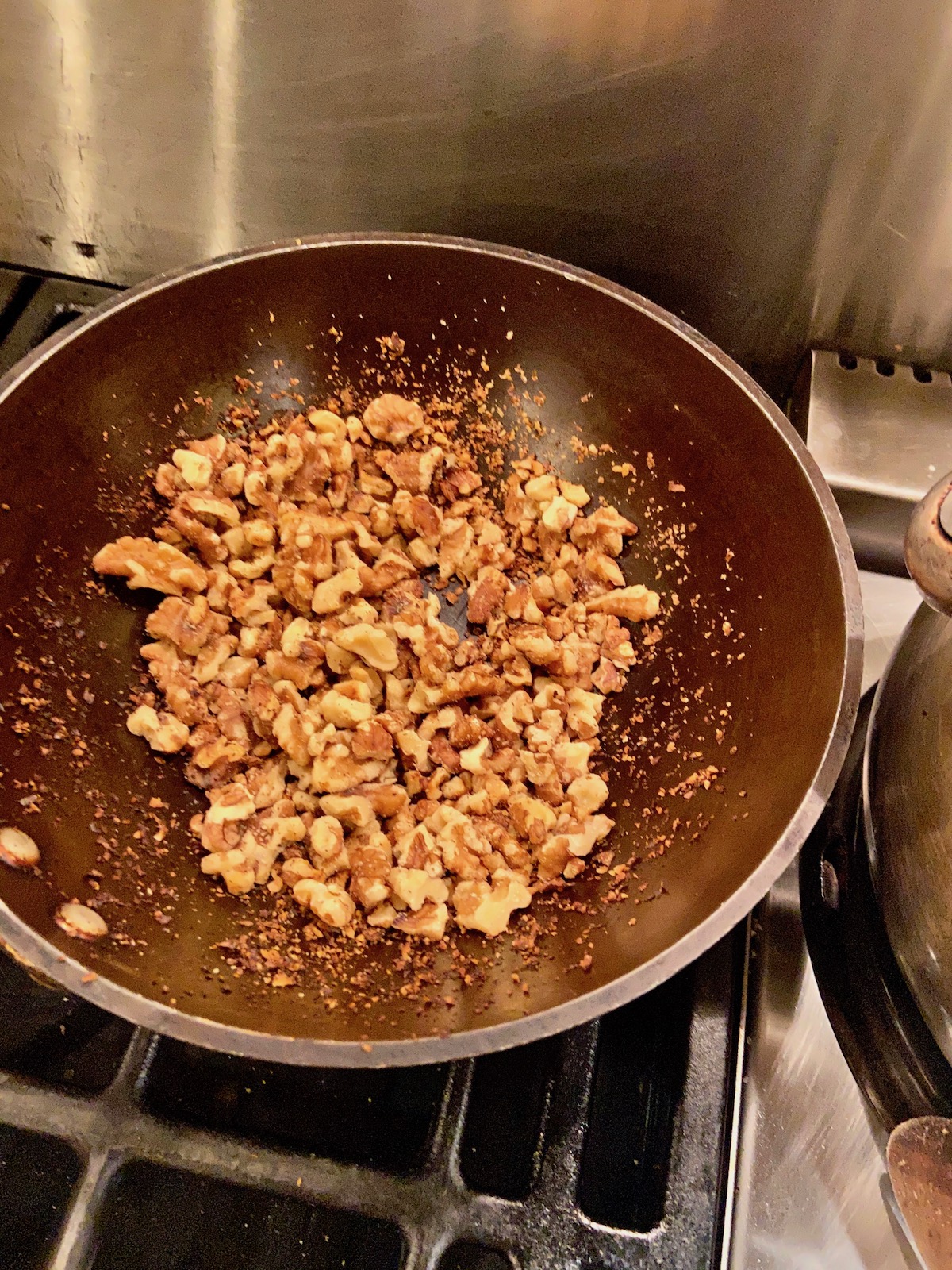 Like the gnudi, the sauce isn’t difficult to make.  You need to roast the walnut pieces first, which we do in a heavy round-bottomed pan over high heat on the stove, tending to them constantly to ensure they don’t burn.

We use a wooden spoon to keep them moving around but you could also shake the pan to accomplish the same thing, as long as you don’t bounce them out with an aggressive shake.  If you prefer, you can also roast them in the oven.  Either way, these get set aside while the mushrooms poach. 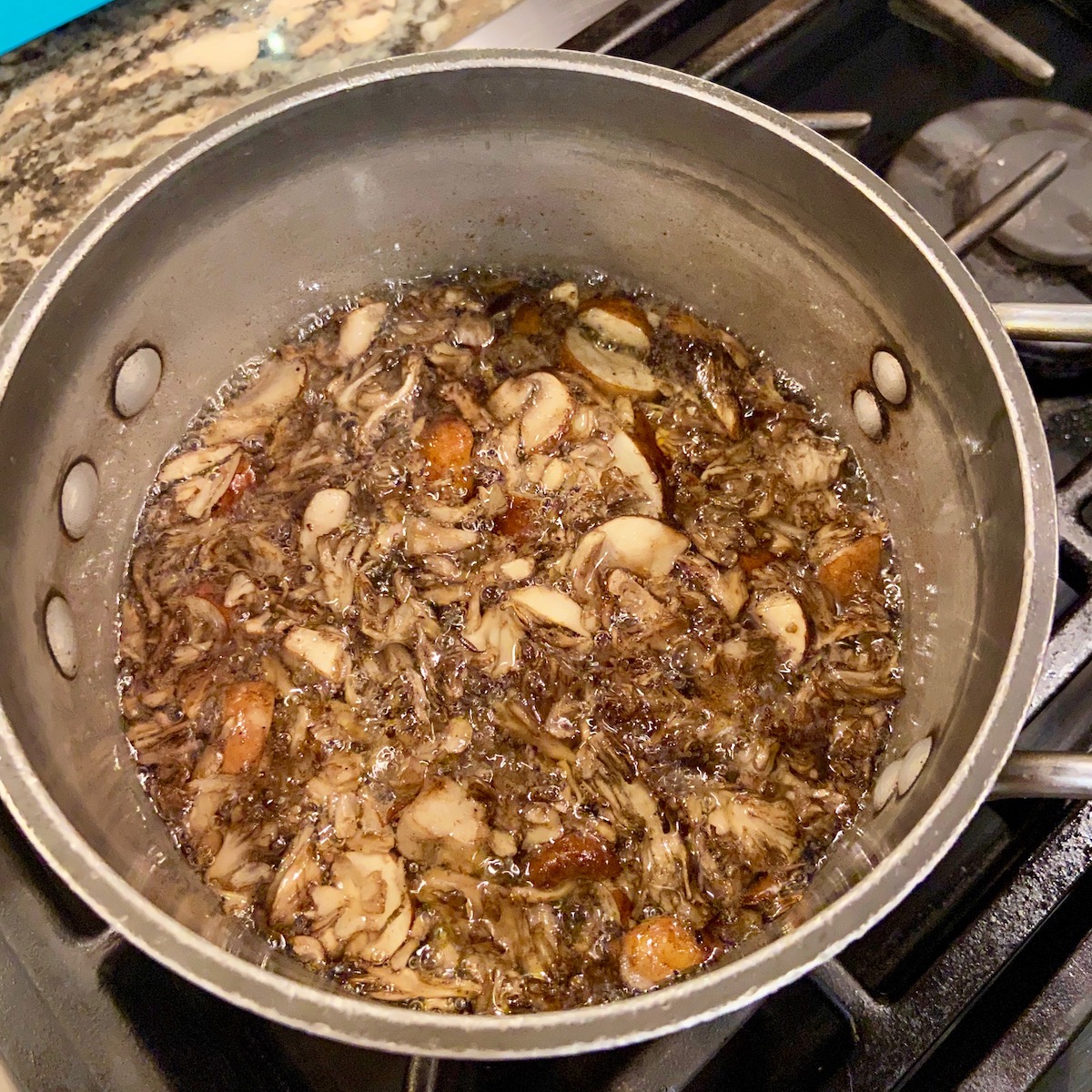 We are fortunate that we live near the home of the Kennett Square Annual (except for 2020) Mushroom Festival that draws 100,000 mushroom lovers from all over.  When we need mushrooms for a dish, we visit the Kennett Square “mushroom lady” at our local farmer’s market and pick up whatever she has on hand.

Maddie favors the maitake variety so we grabbed a pint of those and some oyster mushrooms as well.   We chopped these up into bite-size pieces and, in a first for us, poached 2 cups in an equal amount of olive oil for about 10 minutes.

I was nervous this would be too heavy but WOW, it was amazing.  The walnuts are added in off heat and set aside while the gnudi are prepared.

The gnudi are plated directly from the pot, removed with a slotted spoon, and then topped with grated cheese, lemon zest, mushroom-walnut sauce, more cheese and zest, and fresh basil.  You don’t need much but trust me, every bite is a delicacy.

We served bread on the side so we could capture every drop of the sauce.  We cannot recommend this dish highly enough.

So be trendy and try your hand at gnudi.  Oh, and just in case you’re wondering, the winner of the Dad-Daughter competition?  The consensus seemed to be that first prize went to the Outsiders for our Budino al Cioccolato.   Not sure this was unanimous but hey, we’ll take it. 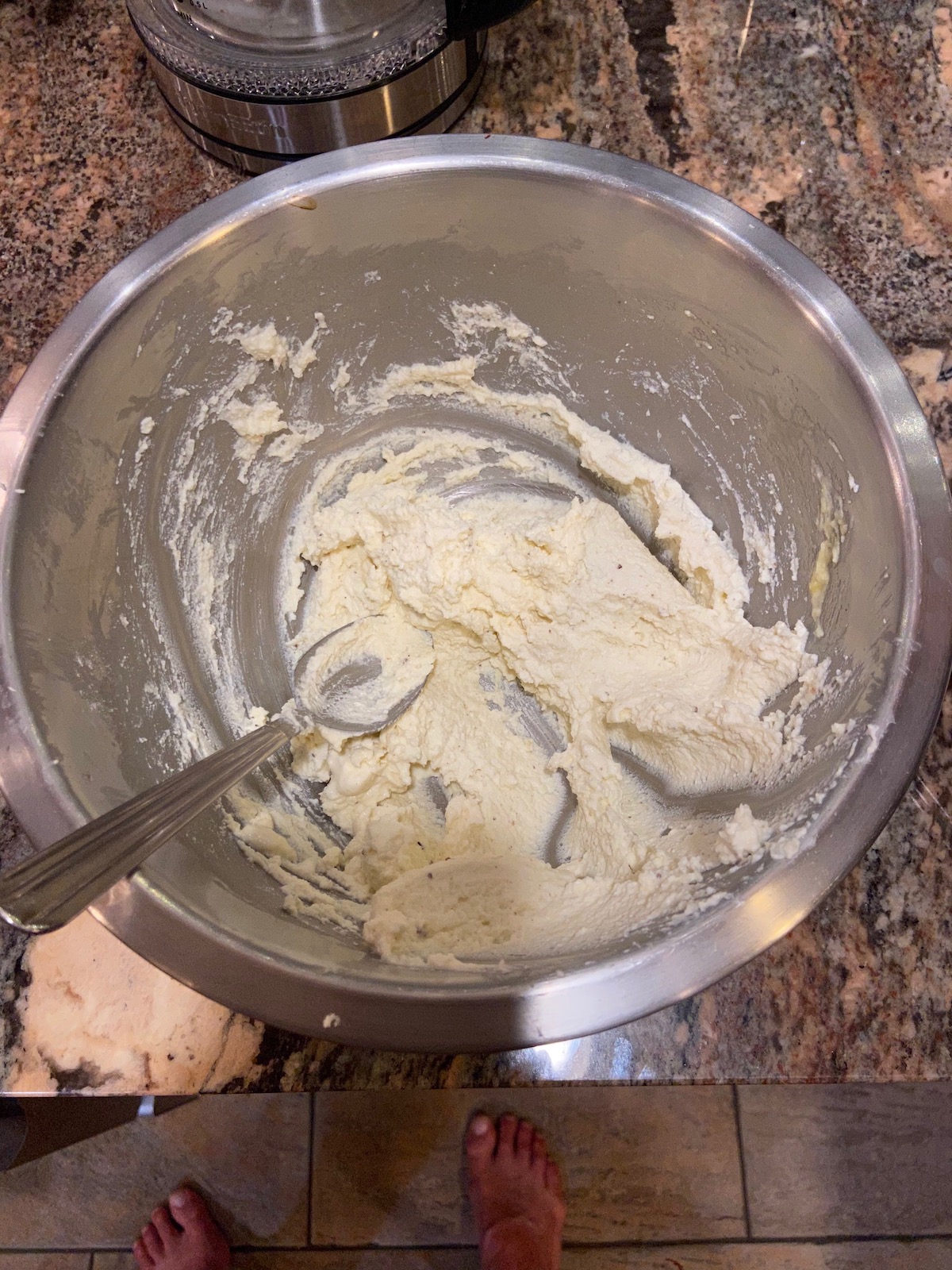 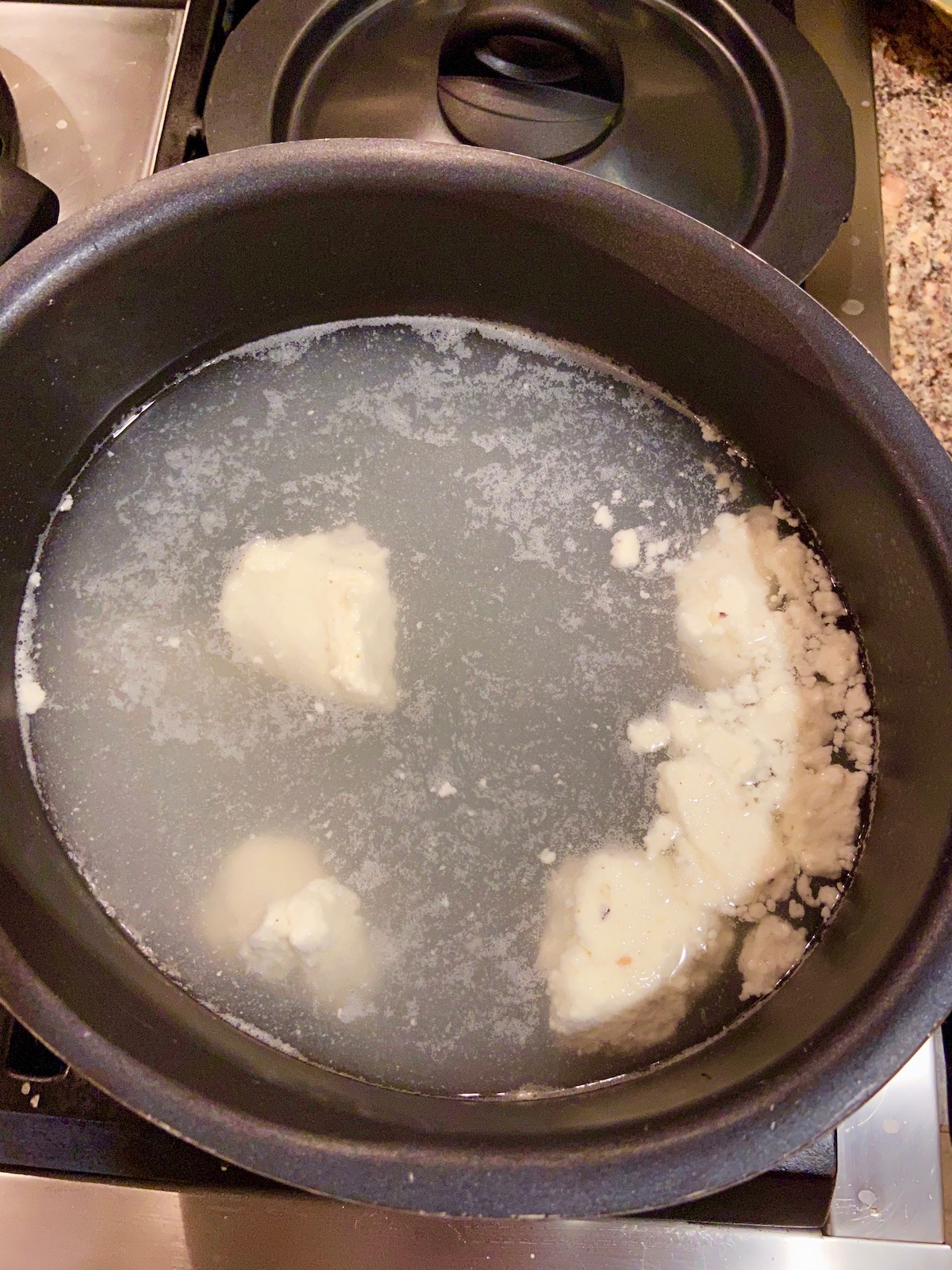 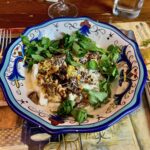 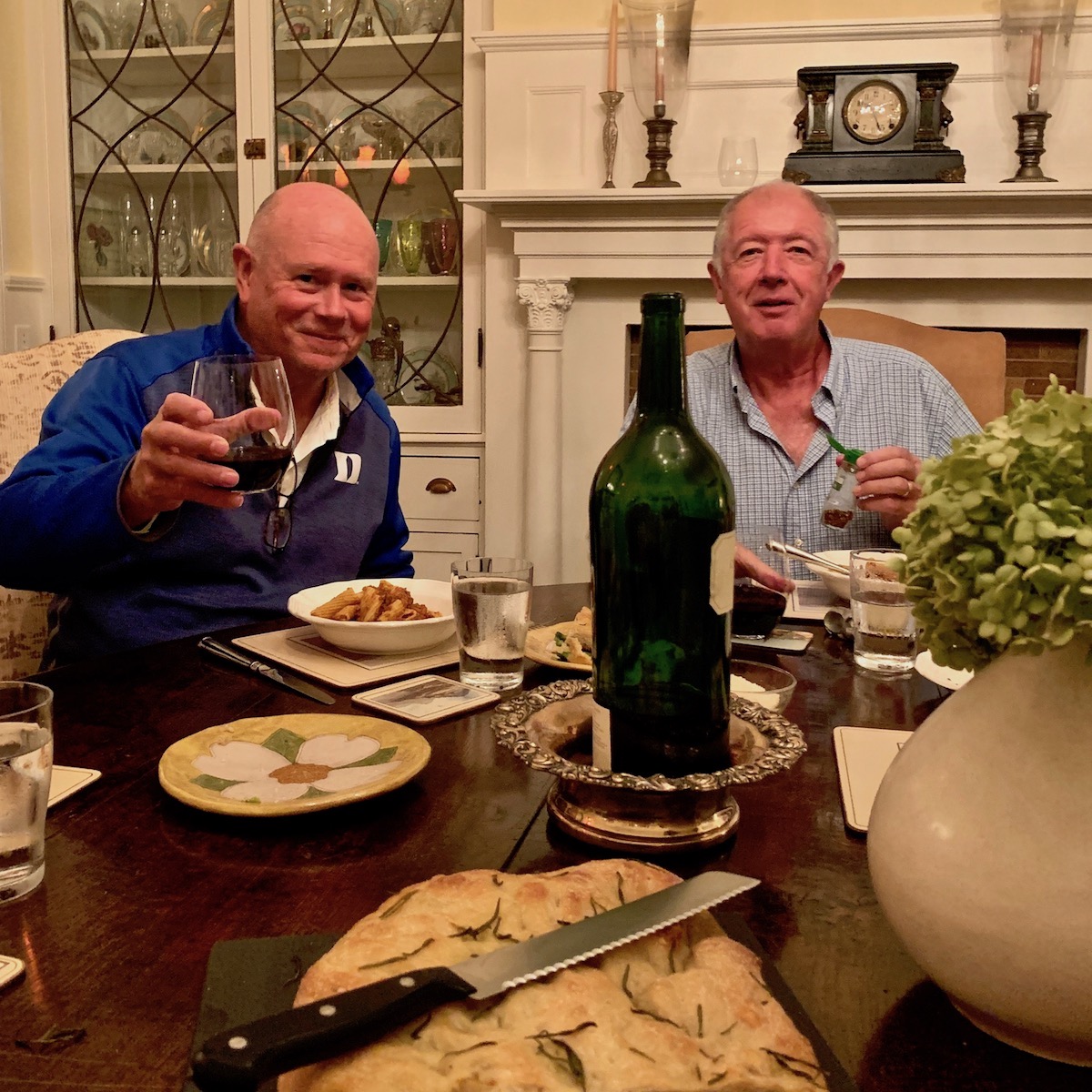