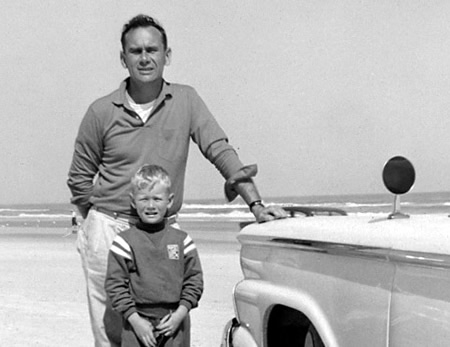 My Dad passed yesterday just a couple of weeks shy of his 90th birthday. He loved to cook and was not "reluctant" at all to try new ideas in the kitchen. He tried Chinese, Italian, French, but without much success, although his burgers and steaks were terrific.

As a little boy, I loved to stand with him as he started up the grill with charcoal briquettes and a little gasoline, something we would never do today, and watch him cook a steak to perfection. He's throw a few baked potatoes wrapped in tin foil on the coals and there was our Saturday night meal.

He also loved to make desserts, especially apple pies, and had more variations on Jell-O than anyone I knew. He would make a batch of pudding at night and complain when my brother and I ate most of it the next day when we came home from school.

His had his cooking flaws too especially when it came to seasoning and cooking with wine. If a little was good, a little more was better in his eyes. So a lot of the "experiments" didn't work out because they were over spiced or tasted too much like wine -- and not very good wine I might add. 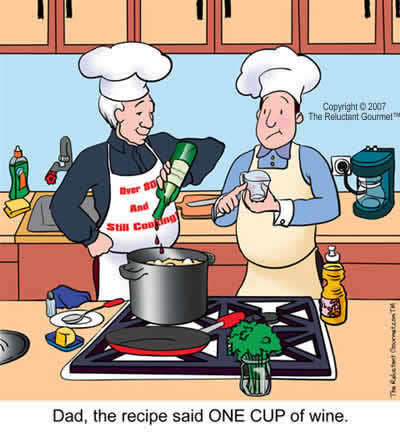 We worked hard around the yard on weekends and he always made us great lunches of fried bologna sandwiches or mini pizzas made with fresh Jersey tomatoes topped with American or Velveeta cheese on Wonder Bread with a little oregano sprinkled on the top and stuck under the broiler until the cheese melted. I can still taste them just thinking about them.

I can picture him during tomato season with a huge plate of sliced tomatoes seasoned with salt and pepper, topped with Hellman's mayonnaise. My Dad could make a meal out of them and often times would.

One of my fondest memories of my Dad in the kitchen was the time we caught a couple of bushels of blue claw crabs down the Jersey shore at my grandfather's. We brought them home, boiled the lot and started removing the meat. The process was slow especially with a couple of young boys trying to help.

He decided to speed up the process by using a water pic to blow the meat out of the legs and smaller swimming legs. The idea worked but there was crab meat everywhere. When my mom came home and saw small pieces of crab on the ceiling she made him scrub it down and repaint it the following week.

He loved to grow his own vegetables, especially potatoes. When I visited my parents on weekends, he would take me to his garden out back and dig for new potatoes. (In recent years, he carried on this tradition with my two daughters who thought it was like a treasure hunt!)  We would bring them into the house with some other fresh vegetables and fry some fresh flounder or grill some meat and boil the potatoes. This tiny, round, red skinned potatoes were served only with a little butter and salt and pepper. They were incredible!

Somewhere I have on home movies a cooking show he and I produced, directed and starred in on how to make a peppercorn sauce with demi glace. This was years ago, filmed on an old video camera. I think we were imitating the Galloping Gourmet in his early days when he drank wine on the show. We maybe indulged a bit much but we also laughed and laughed while we made one mistake after another. I hope I can find that tape somewhere.

I'll miss my Dad, heck, I miss him already but I have lots of fine memories of hanging out with him in the kitchen and learning some of my first cooking techniques. Rest in Peace Dad, I love you.