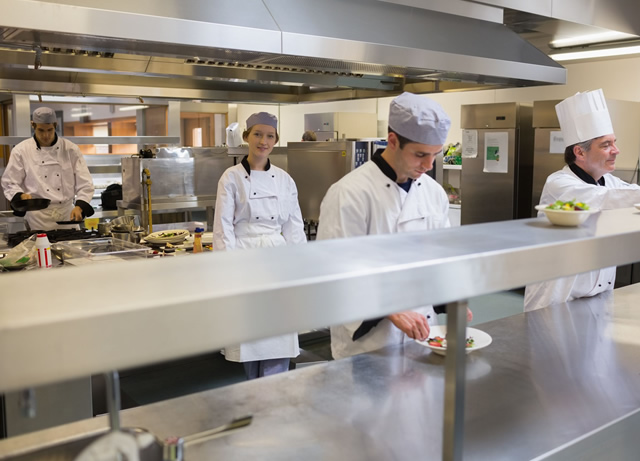 The Brigade de Cuisine, Then and Now - Part 2

As I mentioned in Part 1, if you are interested in getting into the culinary industry or going to a culinary school to be trained as a professional cook, this is a good read for you.  And if you are looking for a culinary school, baking and pastry school or hospitality management program, I recommend you go to All Schools Page and find a school near you.

In today’s commercial kitchens, cost is king.  In many chain restaurants, dishes are created by a corporate chef in a test kitchen, made in a commissary and only finished on site.  Even in small, independent restaurants, many chefs turn to ready-made or flash-frozen products as they try to balance price and quality.

It is the rare restaurant, indeed, whose kitchen staff prepares everything from scratch.  If you have one of these gems in your neighborhood or town, by all means, show them your support by being regular patrons.

Restaurants do well in areas where a lot of people come.  Most of those places are high-rent districts.  As a result, it costs a lot per square foot just to lease the space.

Add on the exorbitant cost of a liquor license (the real money maker at a restaurant) and décor and entertainment that make people want to come back, and you can begin to see that restaurants need to find a way to cut costs somewhere.

And where do they make the cuts?  In kitchen size and back of the house labor costs.  It stands to reason, really.  They want to be able to get as many people inside their doors as can fit, so they don’t want to carve any square footage away from the paying customers.

They carve out the space in the back, instead.  Most restaurant offices are the size of a closet, and the kitchens, unless they are open “show kitchens” are generally cramped and hot spaces.

The Cost of Labor

As far as labor cost is concerned, experienced chefs and cooks make a lot more than servers do, who work largely for tips.  This means that the largest chunk of a restaurant owner’s labor budget goes to paying the cooks.  In addition, the kitchens are small, so owners hire fewer people to do the cooking.

Does this mean you can’t get a grilled steak at a full service restaurant, or there’s no seafood, or no bread?  Absolutely not.  It just means that the cooks of today have to perform tasks that used to be performed by many people.

As a matter of fact, depending on the restaurant and the type of food they serve, there may only be three or four people cooking on a weeknight.  Even for busy weekend service, there may only be six or seven people producing food for 250-300 customers!

In today’s independently owned and operated streamlined, cost-conscious kitchens, these people make up the modern brigade.  Not all restaurants employ different people for all of these stations, and most of them are cross trained so they can fill in if someone is in the weeds (is behind and needs some help), sick, quits or is fired:

Executive chef - sometimes, also the owner.  The executive chef handles cost control, sets the menu, does a lot of the more meticulous preparations and may also expedite.  The expediter is the person who stands at the line where the kitchen meets the dining room.

Called “the pass,” it might be a window, a counter or even a stainless steel table.  It is the expediter’s job to make sure that all items going to a particular table are fired in such a manner that they are all ready at the same time.  The expediter also finishes plates—a swirl of truffle oil, a sprinkle of chives, and a wipe of the rim of the plate.

Although the executive chef may work the line during service, it is more likely that they will supervise, expedite or even jump in to help where needed.

Sous Chef - the sous chef works directly with the executive chef.  They also have a hand in the more meticulous preparations, are often in charge of ordering and inventory.  The sous chef often works the sauté station during service and supervises the other workers in the kitchen.  In a pinch, the sous chef is expected to be able to jump on any station and work it competently to ensure that service progresses seamlessly.

Line Cooks - these are the people who actually cook your food.  Most are cross-trained on all the stations and are responsible for the mise en place and a la minute preparation of all the food served from one of the following stations:

Fry Cook - The fry cook deep fries foods.  If French fries, tempura, fried oysters or catfish is on the menu, the fry cook is responsible for cooking it, along with garnish items that go with it, such as house made tartar sauces or aiolis.

Grill Cook - The grill cook is second in “rock star” status only to the sauté cook.  The grill man is not only in charge of burgers and brats, but also of steaks, juicy lamb and pork chops and maybe even the a la minute service of braised dishes.  They are also responsible for the garnishes served alongside grilled items.

Saute Cook - The sauté cook is the glamor position in the kitchen.  This is the     guy who makes his living flipping food in seven or eight pans simultaneously.  Some of these sautéed items are finished under the salamander (broiler) or in the oven, but the sauté cook is responsible for them and for their respective garnishes.

Pastry cook/plater - he pastry cook is responsible for finishing off dessert and bread items, for making sure that garnishes and sauces are all prepped and ready for service and for plating dessert orders as dessert tickets come in.

While the brigade of today is very different from the brigade of Escoffier’s day, today’s cooks owe the spirit of their stations to that great chef and culinary innovator.