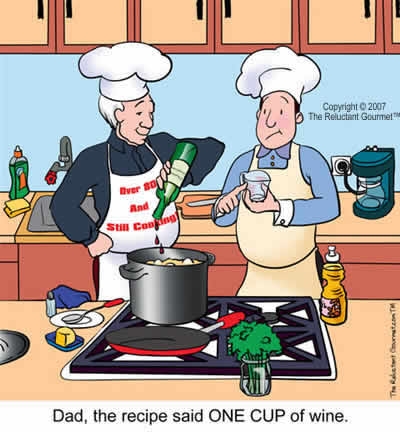 Frustrated by cookbooks and magazines that presumed him to be a gourmet-cooking expert just because he wanted to eat like one, he created the Reluctant Gourmet website as a “cooking guide for the novice from a novice”.  RG helps other home cooks become more skilled and confident in their own kitchens.  His website provides how-to articles, photos, and interviews with top chefs giving his visitors the tools they need to tackle even the most ambitious of gourmet dishes, regardless of their cooking experience.

As one visitor stated, "I like his site because he has so many easy ways to follow along. RG explains things so darned well. I've been getting his newsletter for a couple years now and really enjoy them. I love that he's learning right along with the rest of us!"

The novice perspective and approach to cooking has cemented the role of reluctantgourmet.com as the go-to website for new home cooks. The friendly site introduces readers to pantry set up, how to purchase kitchen equipment and tools, instruction in detailed cooking techniques, and an incredible collection of recipes.

The millions of yearly visitors from every corner of the world inspire The Reluctant Gourmet and drive his continued innovation as a home cook. As RG says, "I still am still a Reluctant Gourmet!  I may take more risks in the kitchen, but there is always so much to learn.  The community encourages each other to always make the best meal possible because, as RG says, "you’ve got to eat, so why not learn to cook and eat well?"

ReluctantGourmet.com is consistently ranked by independent Internet traffic monitor Alexa among the top 40,000 most visited web sites. The Reluctant Gourmet has been featured in numerous lifestyle and food publications including the New York Daily News, NetFood Digest, FastCompany and St. Petersburg Times Online.