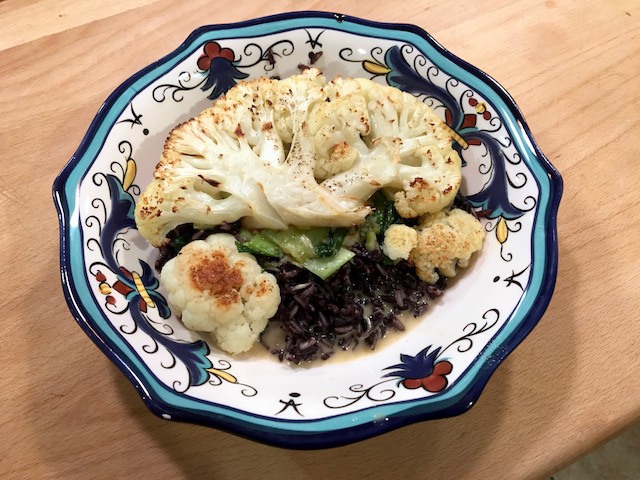 Cauliflower Steaks Are Hot Now & It's Not Just the Curry Sauce

At the beginning of August, when our oldest daughter was packing for college, I announced that once we were down to three at the dinner table, I’d be serving more cauliflower steaks.  This declaration occurred at a roadside farm stand on the North Fork of Long Island while I stared at the biggest, freshest head of cauliflower I had ever seen.

I have no idea why I thought this culinary idea was better suited to a family of three than of four, but I was inspired to sally forth into the world of veggie steaks.

Well, life got in the way and we didn’t make good on my cauliflower commitment until last week.  I had ordered up an all-vegetarian selection from Blue Apron and the box arrived Monday morning.  I immediately plucked out the ingredients for the Roasted Cauliflower Steaks (with curried bok choy and black rice) for dinner.  I only wish I had tried it sooner!

Anyone can access a Blue Apron recipe on line – in this case, it’s Blue Apron Roasted Cauliflower Steaks with Curried Bok Choy   - but what makes it tricky to do independently can be the selection of spices or sauces.  In the case of this recipe, Blue Apron supplied us with ingredients that might have been hard to find, like black rice and golden mountain sauce, but I still supplemented with ingredients from my pantry to stretch a meal for two into a meal for three.

Like many of our dinners, this meal preparation became a family event.  First, we got the rice started:  we added ½ cup of brown rice to Blue Apron’s ½ cup of black rice and cooked in our rice steamer with a ratio of 2 cups water to the 1 cup of rice.

We grabbed some extra cauliflower from our refrigerator (remember the cauliflower cheese pie from a couple weeks ago) and were able to cut six 1-inch “steaks” from that and the head in our box.  We coated the steaks in olive oil and salt and pepper, then roasted them on a cookie sheet in a 475-degree oven for about a half hour, until they were browned and tender.

Those alone would have been sufficient – so delicious!  But of course, Blue Apron is known for its sides, and the curried bok choy and rice were the perfect complement to the steaks. 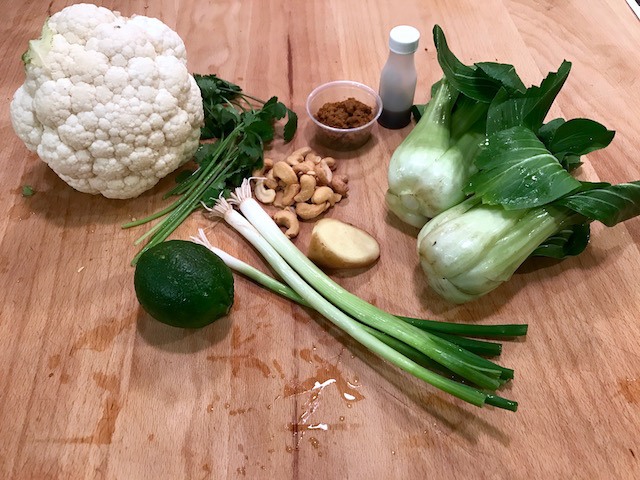 One of the ingredients for the curry sauce is canned coconut milk.  I noticed that this ingredient has started to show up more frequently in recipes I was trying, and I couldn’t figure out where to find this at the store (all I knew was coco-loco for pina coladas!).

So, I actually ordered a case from Amazon and now find I am using it more as a dairy substitute that has a little more creaminess than the other nut milks that are boxed, like almond or cashew mile.  For example, over the weekend, my daughter and I made a dairy- and gluten-free no-bake chocolate raspberry tart and used the coconut milk in the filling.  I find that it’s becoming useful to have in the pantry.  But I digress…….

While the rice and cauliflower are cooking, the recipe calls for sautéing the remaining vegetables.  Minced ginger and the sliced white bottom of the scallions cook for a couple of minutes in olive oil along with curry paste – up to 2 tablespoons depending on how spicy you like your food.

Once these are soft and fragrant, add the bok choy and a splash of water.  Cook another 2-3 minutes until the water has cooked off.  Add the coconut milk and golden mountain sauce, which can be substituted with light soy sauce or Thai fish sauce (except if you are keeping vegetarian), and cook another 5-7 minutes.  Remove from heat and add a few teaspoons of lime zest and juice from half a lime.

To serve, combine green scallion tops, sliced, with the cooked rice, and serve in a bowl along with the finished curry.  Top with the roasted cauliflower and garnish with chopped cashews and cilantro.  We served lime wedges on the side, the juice of which helped to cut the spice of the curry a little bit for my daughter’s tender palate!

Whether you go the full rice and curry route like we did, or just serve the roast cauliflower alone or as a side, I urge you to try it.  It’s really easy and fits into my motto of “good and good for you!”  enjoy.