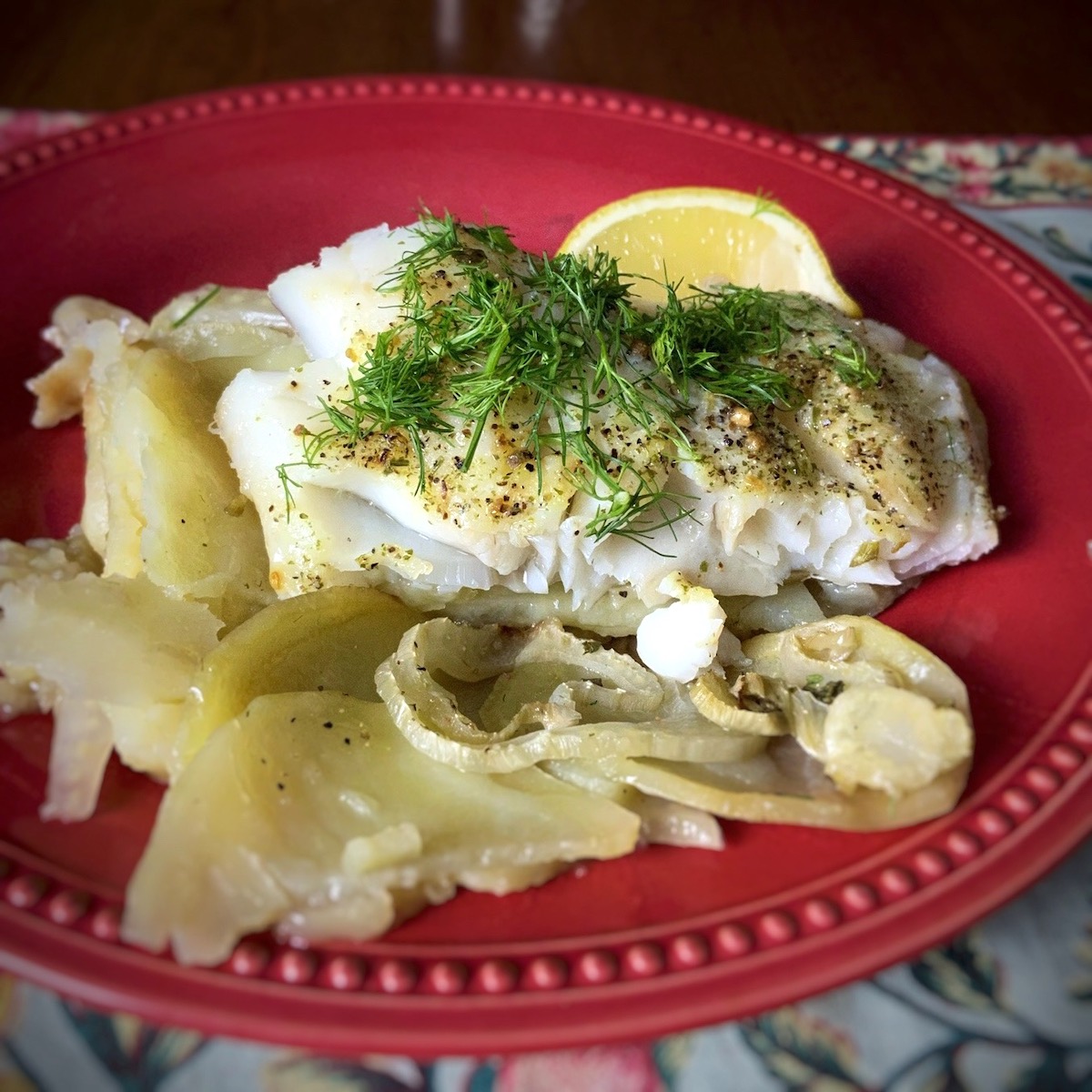 How to Roast Cod with Potatoes and Fennel

One of our daughters is living with three college friends, all of whom are vegetarian.  Since my daughter is more of an opportunivore, the group compromised and shifted toward pescetarianism, which Wikipedia defines as “the practice of using seafood as the only source of meat in a diet that is otherwise vegetarian.”

I spent a few weeks with them earlier this year and since we generally shared meals, I too joined the vegetarian+ meal plan throughout my visit.   When I got back home, I discovered that in my absence RG had also been cutting down on red meat, so we have modified our menu planning and gotten more creative with veggie and fish dishes.

Last week as I was scanning my brain for recipe ideas, I remembered a dish I had made eons ago of roasted fish on a bed of potatoes and fennel.  I couldn’t remember what kind of fish it was, just something fleshy, so I headed off to Andy, our fishmonger at the Farmers Market, to see what inspired.

As usual, everything at Andy’s looked good and I was headed toward the halibut when a beautiful display of cod caught my eye.  I realized we hadn’t had cod in a while. 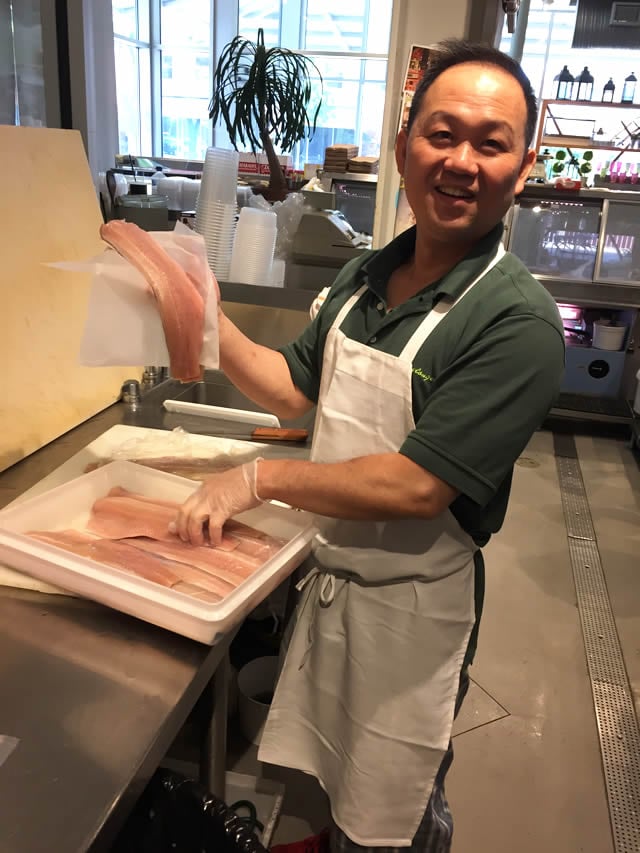 One day, out of the blue and years ago, our younger daughter declared that she no longer liked cod.   Remember, she’s an opportunivore, so this seemed totally arbitrary, but since our kids have been so flexible in their eating habits throughout their lives, this seemed like a small preference to respect.  And since she was stuck at home with us for most of 2020, we just stopped buying or serving cod.

But now we are back to being empty nesters, so cod has returned!  Andy selected a gorgeous 12-ounce piece for us, which cost much less than the halibut would have (and was super tasty).

Then I headed across the aisle to the produce purveyor and picked up three large yellow potatoes and a generous bulb of fennel.

A Little Bit About Fennel

I’m not sure when I was introduced to fennel.  It was never served in my home growing up and I don’t remember ever having it in college, which was the point in my life when my culinary world exploded.

Fennel probably showed up on my radar screen about the same time sun-dried tomatoes came into vogue, and my earliest recollection is of raw fennel in salad.  I love the taste of licorice, so this works for me, but when I tossed it into salads for my family, the girls turned up their noses and picked the raw fennel pieces out.

That’s when I stumbled on the idea of roasting fennel, which renders it sweeter, overcoming or at least surpassing the licorice flavor.  I could serve my family anything that included roasted fennel and it was a hit.

With the cod, potatoes, and fennel in hand, I had everything I needed for dinner.  As I was prepping, I recalled that the last time I made a dish like this I cubed the potatoes and fennel. 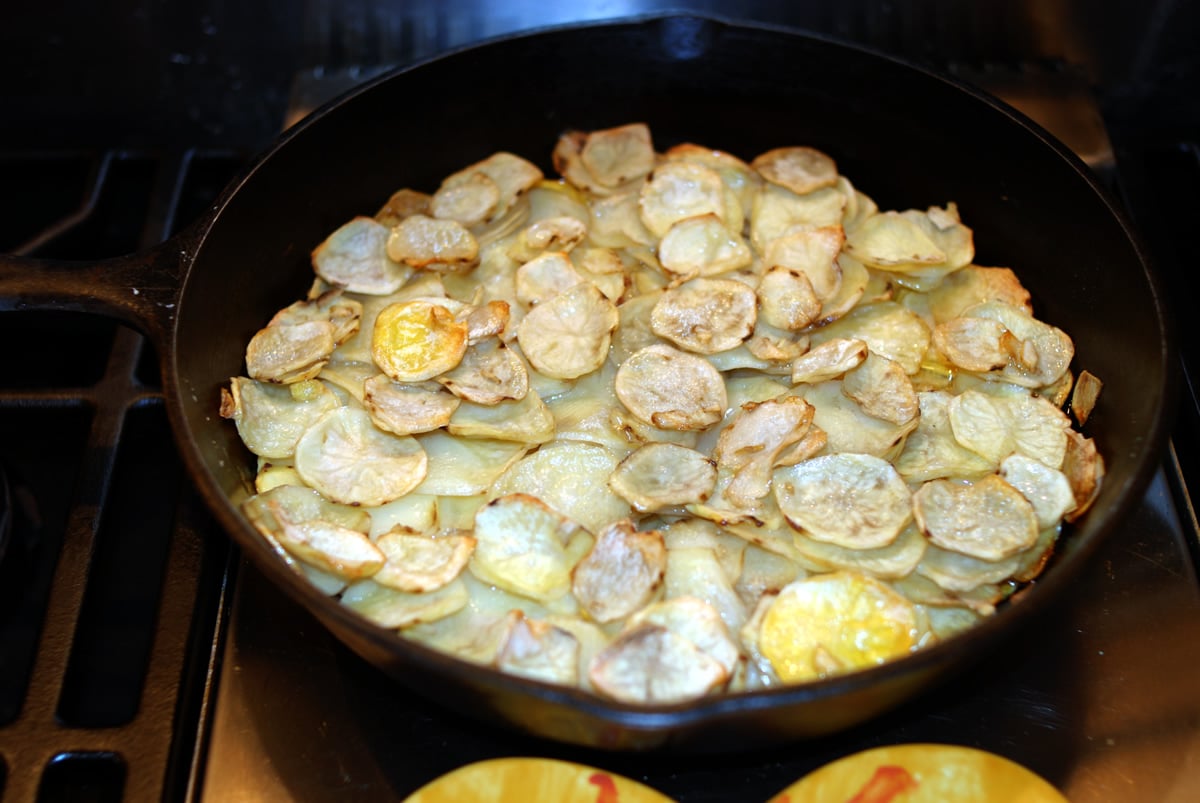 This time, I sliced them thin using a mandolin (sometimes spelled mandoline) and for a very scientific reason:  the mandolin was already out, and it was easier to use it again than to pack it away.  (I am obsessive about packing up mandolins when storing so that no one accidentally slices off a finger when retrieving it or any other utensils near it.)

Who’ve thought that using a mandolin was the lazy way out?!

Before slicing I washed the veggies, peeled the potatoes, and cut the bottom and top off the fennel bulb, reserving the fennel fronds for garnish.  I used the thinnest setting I had for slicing; I think it was about 1/8” thick.

I pulled out a 9ishx12ish sized casserole, coated the bottom with olive oil, then made three layers – potato, fennel, potato – adding a drizzle of olive oil and salt & pepper to each layer.  This went in the oven first, which I had preheated to 400°F since that’s the temperature I like for roasting fish.  (Sort of the same logic as used in selecting the mandolin.)

My plan was to roast the veggies for about 15 minutes and then add the fish for another 10-15, but it took closer to 30 minutes before I could easily pierce the potato/fennel combo with a fork.  Roasting time varies depending on how thick the slices and layers are; for example, if I had made ½” cubes, they likely would have cooked faster.

I took the cod out of the refrigerator when the casserole went in the oven so it could get to room temperature.

After the above-mentioned 30 minutes, the casserole dish came out of the oven, the cod went skin side down on the veggie bed, more olive oil was drizzled and salt & pepper shaken, and the whole thing went back in the 400-degree oven for 15 minutes, as which point the cod was flaky and the potatoes and fennel were melded together and infused with the oil and drippings from the fish.

The dish was plated the same way it was cooked:  cod atop a bed of potatoes and fennel.  The reserved fennel fronds were sprinkled on top of the fish and dinner was served.

This is such a tasty meal, and you could change it up with any fish that lends itself to roasting, or by adding slices of onion, sprinkling fennel seeds on top of the fish, anything that inspires you.  That’s how we like to cook! 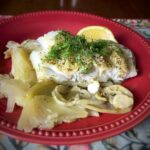 Roasted Cod with Potatoes and Fennel