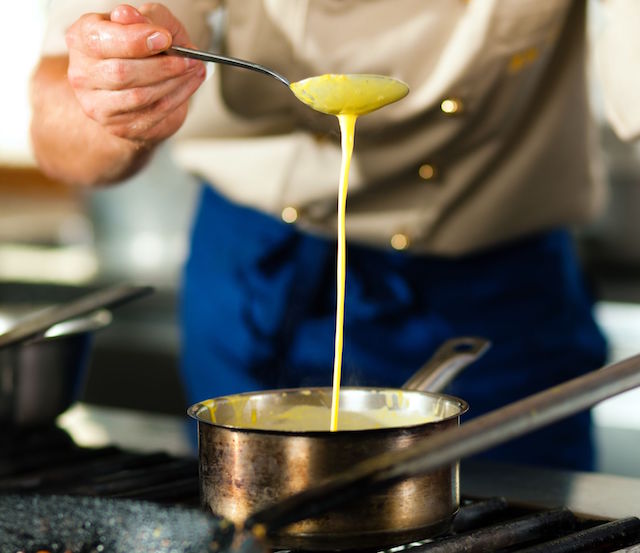 Part 1 of  The Secret to Successful Sauces – Ingredients

One of the differences between restaurant chefs and home cooks is that chefs are familiar with a wide variety of specialty ingredients that can subtly or not-so-subtly enhance a sauce. They understand the diner's palate, the flavors that tongues can taste and the myriad scents that combine with those main tastes to produce complex flavors.

The basic tastes that the human tongue can distinguish are sweet, salty, sour, bitter and umami. Umami is the fifth taste, isolated and defined by Japanese scientists, and can be described as meaty/savory/mouth-watering.

While most of us can think of ways to play up the first four flavors using sweeteners, salts, vinegars and citrus juices, chefs are masters of highlighting the more elusive umami taste using some secret ingredients:

minced sautéed mushrooms add a subtle, meaty flavor to stock and wine-based sauces. Puree the sauce, and your diners won't know that the mushrooms are there, but they'll wonder why your sauce is so amazing.

anchovies or anchovy paste melted into a sauce adds salt and a mouthwatering quality to any sauce that does not read as "fishy" at all.\

fish sauce is a fantastic Japanese flavor enhancer. Add a tablespoon to a pound of ground beef for the best, beefiest-tasting hamburger you've ever eaten. It also adds depth to chicken and turkey stocks. Add a little into almost any savory sauce you can think of to make it as mouthwatering as possible.

tomato paste or ketchup work wonders when added to any tomato or beef-based sauce. The concentrated tomato flavor in each product is loaded full of umami goodness.

Worcestershire sauce is kind of like the Western version of fish sauce. No surprise, it contains anchovies. Use it in brown sauces and tomato-based sauces to enhance flavor.

Cooking With A Roux

A roux is a cooked thickener made by combining equal parts of flour and fat (usually neutral vegetable oil or butter). Depending on how long you cook the two ingredients together, a roux can be anywhere from almost white to a deep mahogany color.

Many of us are familiar with darker roux as flavoring and thickening agents in Cajun and Creole cooking, but white or blond roux is also a classic French thickener.

The cuisines are more alike than you might think: Cajun is short for the French Canadians who left for Louisiana, bringing their flavors and cooking techniques with them.

Cooking With A Slurry

A slurry is a very liquid mixture of cold water or other liquid and a starch, usually flour or corn starch. The starch is whisked into the cold liquid until it is smooth and then is poured into a boiling sauce, a little at a time, until the desired thickness is achieved.

Slurries must be made using cold liquid or otherwise the starch will gelatinize on contact with hot liquid, effectively keeping some of the starch from getting wet and resulting in a lumpy sauce.

Once the starch is in solution with a cold liquid (the slurry itself), there is no danger of lumpiness, but the sauce must be kept at a low boil for at least a minute or two to cook out any raw starch flavor.

While reduction is primarily a technique, it is a technique that thickens sauces. Simmer or boil a sauce gently until enough water has evaporated leaving what is left in the pan both with concentrated flavor and a syrupy consistency.

A good way to thicken a sauce without adding additional fat is to cook starchy foods in the sauce (think rice, pasta, potatoes). Sometimes, just the starches that leach out of the foods while cooking are enough to thicken your sauce. If not, you can puree some or all of the straches into the rest of the sauce.

For example, remove a cup or so of the cooked starch and liquid and blend until smooth. Add this puree back to the sauce for additional thickening.

Egg is used to thicken the classic dessert sauce, creme Anglaise, which is essentially a stirred custard. Egg is also used to thicken savory sauces, most classically allemande sauce, which is a lemony veloute´ sauce thickened with egg and cream.

To use egg to thicken a sauce, the egg must be tempered - slowly brought up to the temperature of the sauce so it won't curdle - before being quickly whisked into the sauce. Sauces thickened in this manner often benefit from straining to make sure that it is completely smooth.

Beurre Manie is a thickener made by kneading together equal amounts of fat and flour until well homogenized. Since fat coats all the starch granules, you can literally just whisk in little pieces of beurre manie until the sauce is as thick as you want it.

As well, there is less need to boil the sauce (as with a slurry) for a period of time after adding the beurre manie since the fat coating keeps the starch granules from tasting raw.

Adding a little cream to a sauce and letting it reduce a bit adds a richness, subtle thickening and a creamy mouthfeel due to all the butterfat in cream.

Part 1 of  The Secret to Successful Sauces – Ingredients