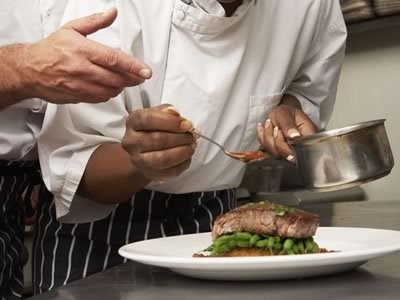 As America's fascination with food finds it's way into the mainstream, it provides a view of the culinary world that most people had never seen before. With the rise of The Food Network, and shows like Iron Chef and Hell's Kitchen, more and more people are entertaining the notion of taking up cooking themselves. They see a celebrity chef like Emeril Lagasse, or Bobby Flay, whipping up all sorts of fantastic creations, and think to themselves, "Hey, that looks like fun! Maybe I should be doing that too!"

What they don't see on The Naked Chef are the years of training, hard work, and dedication that are involved to get to that point in one's career. In a fashion similar to that of most other aspects in our society, these celebrity Chef Icons are shown as role models to the world of food, and too many people believe they'll be on their own cooking show after a few short years in culinary school.

However, this is not the case. No one stops to think that those folks you see on T.V. are only a tiny fraction of everyone who works in the food service industry. Of the hundreds of thousands of people who toil endlessly, day after day, in kitchens across the country, only a handful are given a shot at the limelight, to “magic up” Ham Hocks and Shrimp Creole on national television.

If you are considering becoming a professional culinarian, and thinking about spending several thousands dollars on a culinary school, know this: Professional cooking is not a game, and it is certainly not a way for you to pick up a few little tricks to impress your friends at summer parties and holiday meals. If that is what you're looking for, search up a few recipes on Yahoo and have at it, or better yet, go back a page or two, and check out the other sections of ReluctantGourmet.com. Working in a kitchen is rigorous, repetitive, sweaty, fast paced physical labor. I do not want to give the impression that it is not fun, or rewarding, or an excellent career choice, but it is not for everyone, and it is certainly not the kind of job that everyone can do.

There are a lot of things that most folks don't really think about before they decide to sign on to a culinary program. The first is that this is something you should intend to be doing for many, many, years. Culinary school is not cheap, and by the time you graduate, student loans can total more than $20-30,000.

Also, it's not a degree that is easily transferable. You cannot take an associates degree in hospitality management and expect to get a job in many other fields, and if you don't like the restaurant industry, you could be stuck with a mountain of debt, and no source of income.

Secondly, forget holidays. Forget weekends and evenings off, forget being able to hang out after work with most other people, because working in a kitchen demands long hours, working every Friday, Saturday, and holiday you can think of. On top of that, getting out of work close to midnight on a daily basis does not leave much room for fraternizing with those who have office jobs.

These are all lifestyle changes that many people are not O.K. with. But, again, if this is something that you really want to do, the rewards come in forms far more valuable than money (although that's a very nice thing, too.) Another thing that I cannot emphasize enough is the physical toll that's taken every day in a kitchen.

For people who have back problems, or other limiting health conditions, think about being expected to stand 10-12 hours a day, receive, move and store product, and the inevitable joy of scrubbing cooler walls and floors. Oh, and remember that air conditioning is almost unheard of in kitchens- most hot lines stay at a temperature over 100 degrees Fahrenheit all night, every night.

If you've decided that this is really what you want to do with your life, then congratulations to you. There are a number of prosperous culinary schools across the country, offering a wide variety of training programs, but I'm not here to toot the horn of any one school in particular. Classes range from basic cooking principles and knife skills, to charcuterie, to business mathematics and Hospitality management. All of these things are wonderful sources of knowledge, and will certainly be invaluable in your career, but it is not where the learning ends.

With many professions, you can walk out of school with a degree and land a job as an engineer, or a personal accountant, and so on and so forth. But do not expect to finish your culinary curriculum and get a job as a chef. You'll be entering the workforce where thousands have come before you, and have already made a name for themselves through their work, and their ideas.

Upon graduation, you should absolutely try to find the best restaurant that you can to work for. By best, of course, I mean the ones who have a reputation for doing excellent cuisine in their field, the restaurants who have been around for more than a few years, and most importantly, the ones that make the food you like. It would do no good to work in a steak house if you're a vegetarian. It will be a waste of time for not only you, but the entire restaurant, to be working with food that you don't love.

If you are a baker at heart, for goodness sake, go work at a bakery! I can't count the times I've come across a person who worked in a kitchen just because it's a 'job', or because it's where they were told they should go.

When you are thinking about the place where you will be spending the majority of your time for the next few years, it is worth taking a while to find where you really want to be. Whether this is achieved by going out to restaurants and talking to the chefs, or asking to tour the kitchen during an interview, it can mean the difference between treading water and sailing the ocean.

The points I‘ve made here are not meant to be taken as scare-tactic propaganda meant to frighten you away from pursuing your culinary career, but rather an honest look into some of the less glamorous aspects of kitchen life, something that you won't see in the brochures of Fantastic Cooking School.

Those with a passion for food take all of these challenges in stride, and see it all as part of what they do. For me, it has only been six short years since I started cooking professionally, but already I have seen more, and experienced more than I would have ever expected. As an up and coming culinarian, the possibilities for advancement are boundless, the opportunities for bigger and better things await anyone who is willing to take this craft and embrace it, not only as a job, but as a way of life