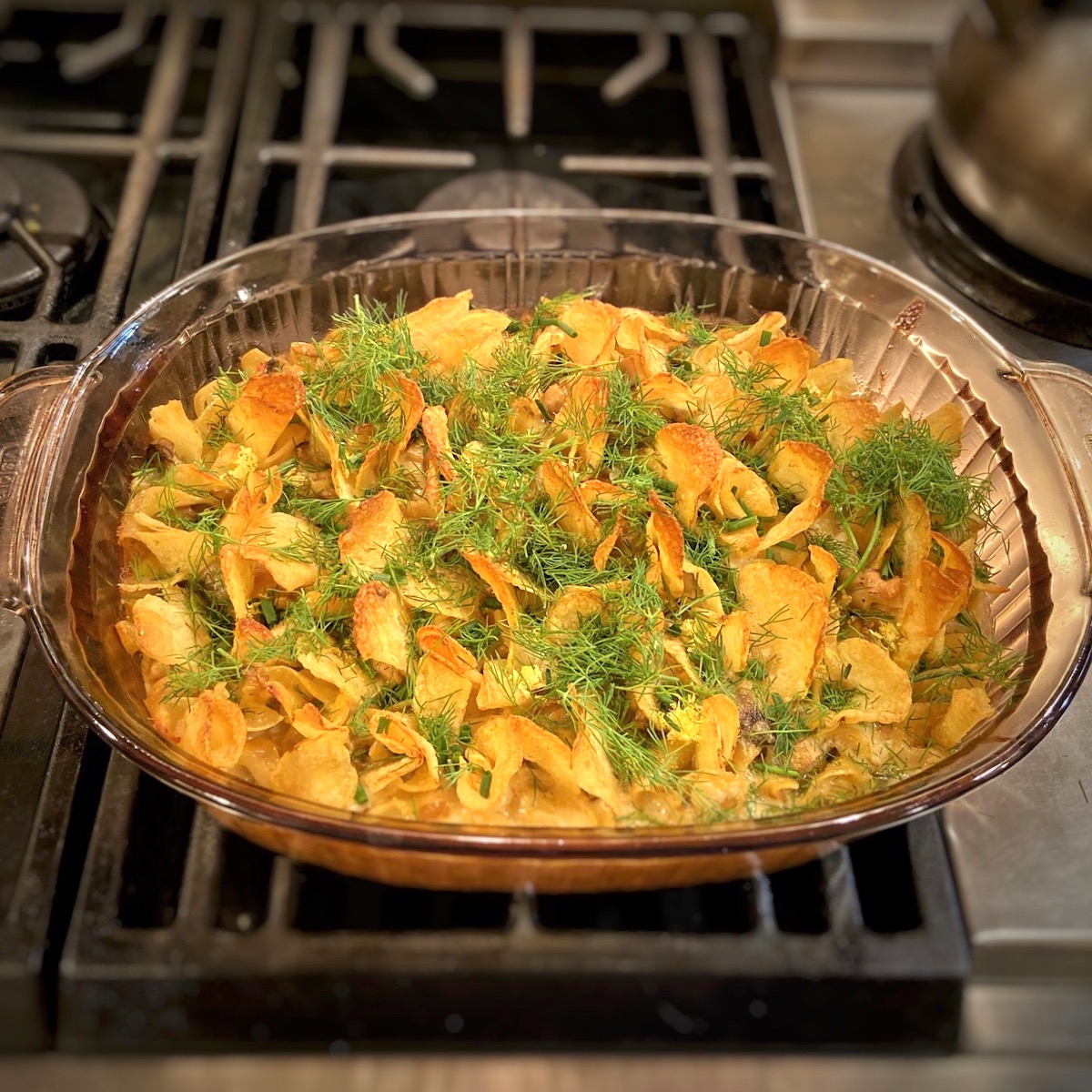 How to Make a Classic Tuna Casserole

My wife is experimenting with meals from her childhood. Two nights ago she prepared a childhood favorite, Chicken Baked in Cornbread. It was a hit.  Last night she topped that meal with a Tuna Casserole with Dill.

I have to say I was a little skeptical when she said she was making a casserole that included potato chips. It took me back to the days when my mom would make them and they weren't very good. Typically overcooked, dry and tough to get down.

Not true with this recipe we adapted from Bonappetit.com. It was flavorful, moist, and hard to stop eating and the potato chips were a perfect accompaniment that not only added texture but was a blast from the past.

We made a few changes to the original recipe because my daughter's college friend was visiting and she is a pescatarian, someone who doesn't eat meat but does eat fish. So we substituted vegetarian stock for chicken stock.

Nothing out of the norm here. Egg noodles, mushrooms, leek, dill, all the ingredients you might find in a classic casserole. What you won't find is a can of Campbell's cream of anything soup. No, you're going to prepare your own cream sauce with the veggie stock, roux, cream, cheese, and a few other ingredients.

Update - Someone asked me to expand on what I mean by egg noodles because they mean different things to people in different parts of the world. Sorry about that, I didn't realize it.

The most important ingredient in this dish in my opinion is the tuna. Back in the day when my mom made a tuna casserole, she'd open a couple of cans of Bumble Bee tuna but for this dish, they suggest "jarred oil-packed tuna."

I buy a jarred tuna imported from Italy from Tonnino. It's more expensive than canned tuna packed in water and not something I would use to make tuna fish salad but it's extremely tasty. I use it all the time for my penne with tuna, artichoke hearts and olives.

We chose to use button mushrooms because that's what we had in the refrigerator but do experiment with other types to make it your own recipe.  I would like to try Hen of the Woods or Lion's Mane mushrooms next time to see how it changes the flavor profile.

What I learned from this recipe that I did not know is to undercook the egg noodles. In fact, you barely cook them at all because they will continue cooking while in the oven baking in the sauce. If you cook the egg noodles to al dente or more, they'll end up mushy after the baking process. 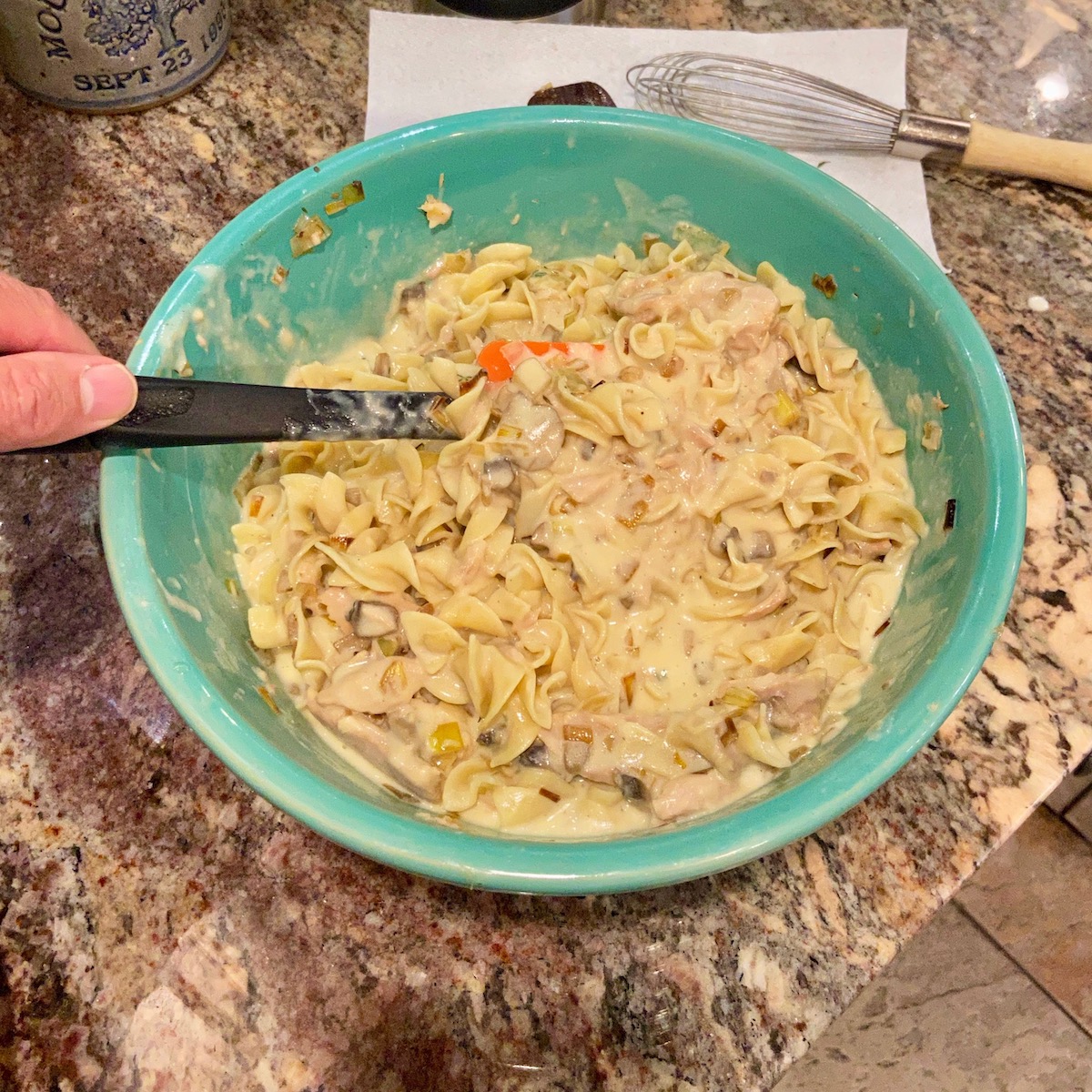 At first glance, this dish seems to have a lot of moving parts, in that there are many steps.  However, simplified it is really a 4-step process with three basic components that come together in a fourth and final step bringing all the ingredients together.  If you approach it with that in mind, the undertaking doesn’t seem quite so daunting.

The key here is to time the cooking so they come out a little undercooked since they will continue to cook in the casserole. As long as you use a timer, you can set it and forget it while turning your attention to other things, like sauteing the veggies.

As with any recipe, if you prep the vegetables before putting a pan on the stove, everything goes a lot more smoothly.  The vegetables take a total of 15 minutes; the first ingredients in the pan cook for about 8 minutes, so during that time you can start the cream sauce, since the first step in that process is only a couple of minutes.  Again, if you have all your ingredients prepped and ready to go, multitasking is a no-brainer. 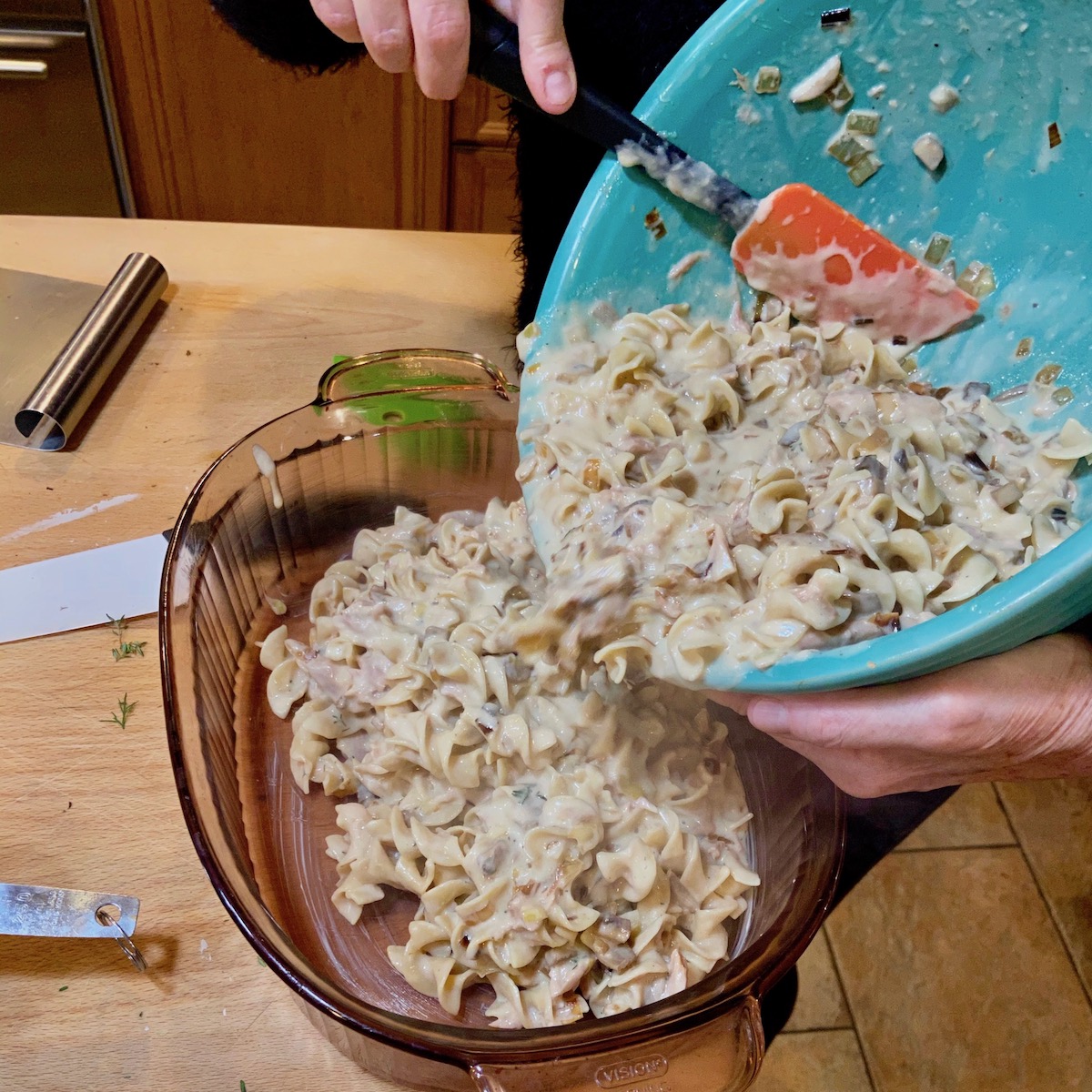 So my wife, who likes to be organized, approached this in the following sequence: prepping all ingredients, preheating the oven, boiling the pasta water, dropping in the noodles and setting the timer for 2 minutes, heating the saute pan and adding the butter, draining the noodles, getting the onion and leek saute underway (8 mins total), starting the roux, and then working back and forth between the veggie saute and the sauce.

It makes for a more efficient process time-wise, and when you have hungry people standing around, that’s a good thing!

When the veggies are cooked and the sauce is finished, it all gets folded together with the noodles and tuna, spread in a casserole dish, and topped with “planted” potato chips.  By that I mean, you stick the chips into the casserole as if you are planting them.

This keeps them crispy so you get that crunch when you eat them.  Super tasty and sure to win over the skeptics. 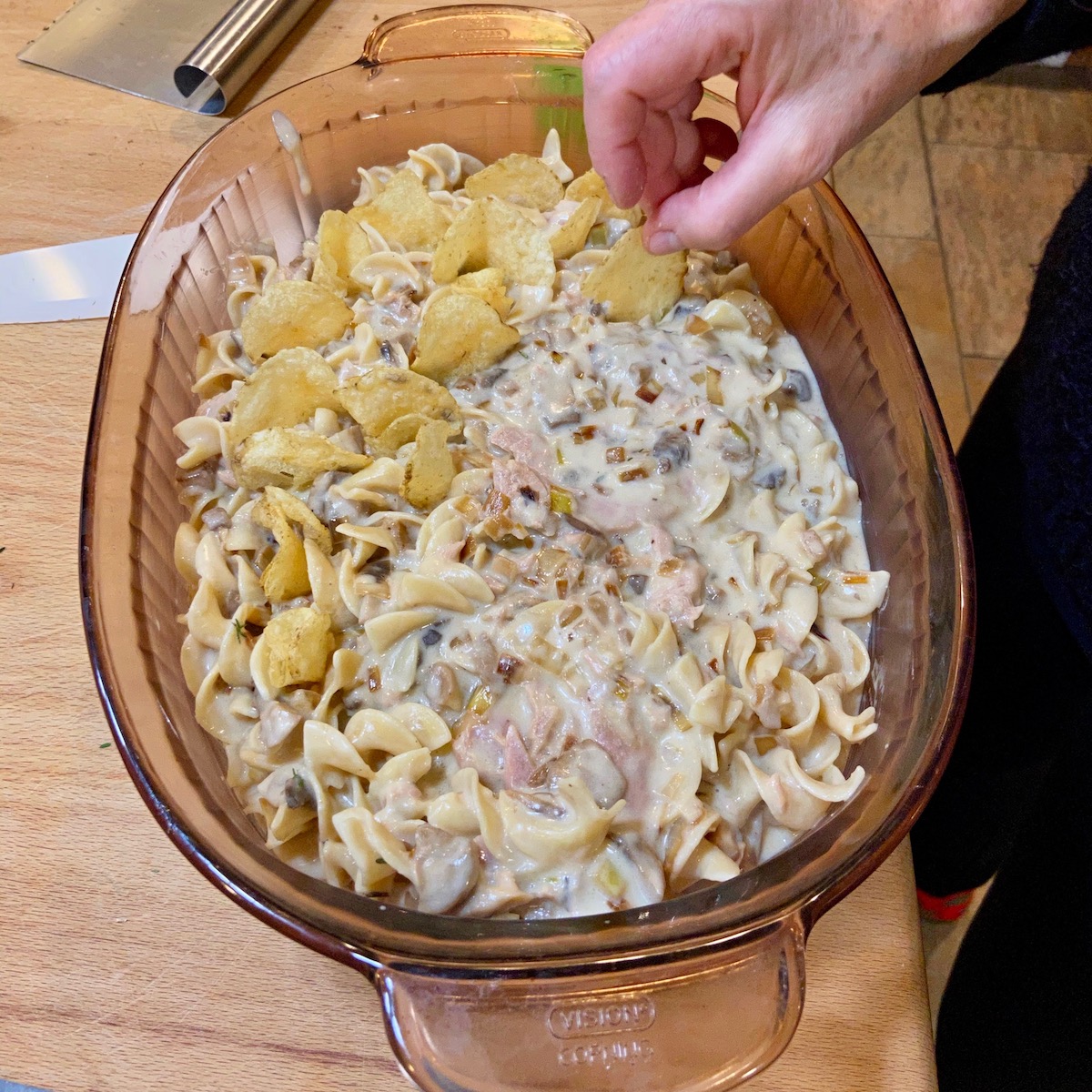 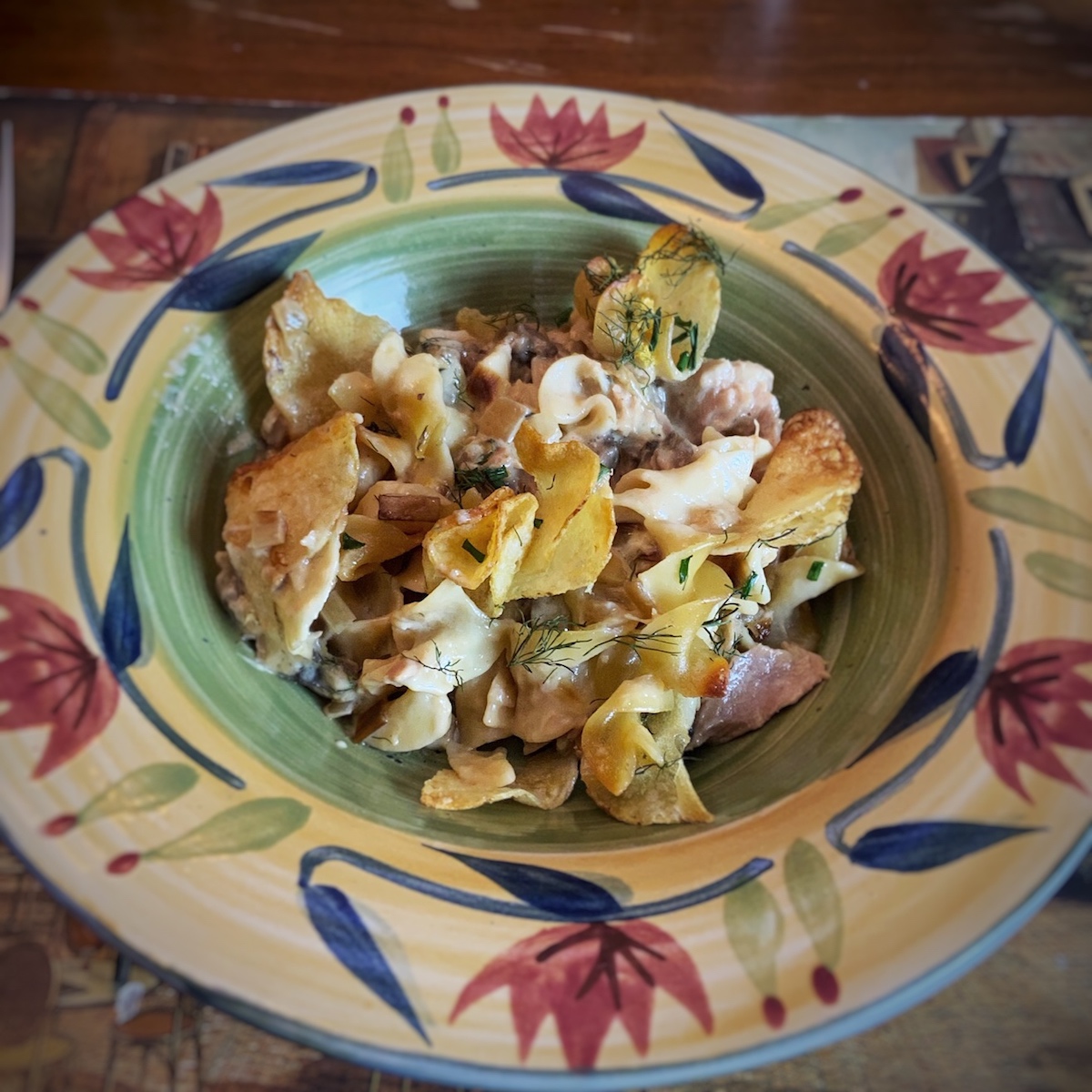 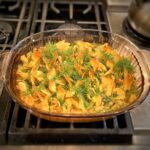