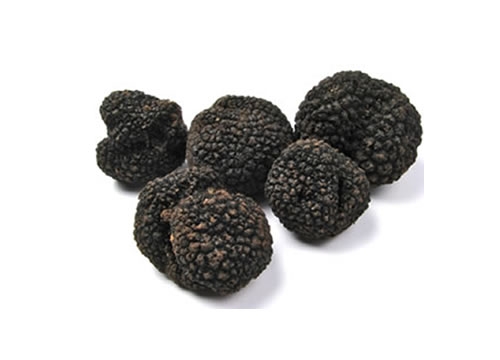 Truffles Are A Pig's Best Friend

I am a big fan of truffles and I'm talking about the truffles pigs and dogs find in the ground that are used to add their "perfumy fragrance" and intoxicating flavor into a simple pasta dish or bowl of risotto. Hard to find fresh here in the United States and prohibitively expensive even if you are able to find them, I resort to the more modestly priced truffle oil.

I wanted to know more about truffles, how they are found, where they come from in Italy, who can take them from the ground so I asked my friend Lola, who lives in Italy and has been out hunting for truffles many times, to answer some questions I have about this elusive tuber. These are questions I hope you find interesting because Lola's responses are terrific. 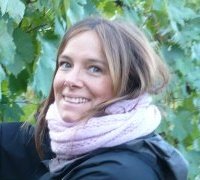 I'm glad you asked me to write about truffles, RG,  because I love to speak about the foods I love best. Truffles are in my top 5 favorite foods, along with chocolate, seafood, tomatoes, and basil.

Preposterously elusive, harvested with spy-story secrecy, imbued with an otherworldly mix of  sublime and naughty fragrances and often confused with the fine chocolate with the same name, the truffle has been prized by peasants and nobles alike for centuries.

This quote from the French writer Alexandre Dumas sums up the infatuation:

"The most learned men have been questioned as to the nature of this tuber, and after two thousand years of argument and discussion their answer is the same as it was on the first day: We do not know. The truffles themselves have been interrogated, and have answered simply: Eat us and praise the Lord."

Are there professional truffle hunters or do locals find them and sell them to distributors? And how deep are truffles buried in the ground?

It's hard to believe that one of the rarest, most expensive foods in the world is located thanks to the talent of pigs and dogs. These exceptional fungi resemble knobbly tubers and have a very penetrating smell, they are found growing around the roots of trees, mainly oak, chestnut, poplars, limes, hazel and beech trees, and can be found up to a meter below ground, never beyond the range of the shady branches.

The difficult-to find tartufo is routed out by animals that have been specially trained to do so for several years. Pigs have keener noses, but dogs are less inclined to gobble up the prize. Once the dog indicates a possible find the trufolau (expert truffle harvester) uses a narrow spade with a long handle to dig up the truffle without damaging it. He then proceeds to scrape back the earth, being extra careful not to touch the truffle with his hands (which will cause the fungus to rot).

If the truffle isn't ripe, it is carefully reburied for future harvesting. This methodically slow and labor-intensive reaping method is what makes truffles so extremely expensive.

Do they grow all over Italy or are some regions better than other? Are they readily available in those regions?

Truffles - with their heady, earthy, garlicky aroma and unusually delicate flavor - have been prized by gourmets for centuries and were credited by the ancient Greeks and Romans with both therapeutic and aphrodisiac powers. Of the almost 70 known varieties, the most desirable is the white truffle (actually pale cream or brown with white marbling) of the Alba region in Piemonte (Tuber magnatum).

The end of September heralds the arrival of the precious white truffle - tartufo bianco, the high point in the truffle hunters' year, and there are a number of festivals to celebrate this expensive delicacy. The largest and most popular of these is the white truffle festival in Alba. You can check with the official Tartufo Bianco di Alba International white truffle festival website for dates for next year.

White truffle is mostly found in northern and central Italy, while the Tuber borchi, aka Whitish truffle, is found in Tuscany, Romagna, Marche, and Molise. Neither of these is as aromatic as those from Piemonte.

The next most popular is the black truffle, or Black Périgord Truffle (Tuber melanosporum). It is named after the Périgord region in France and grows exclusively under oak trees. In Italy our own exquisite black truffle is the Tartufo nero pregiato, also called Tartufo nero di Norcia e Spoleto. Specimens can be found in late summer, early autumn and winter, reaching several centimeters in diameter and weighing up to 100 grams.

This delicately pungent gas-scented tartufo's flesh is dark brown with white streaks, darker wrinkly skin, and some prefer it to the noble white from Alba. Black truffles sell between â‚¬200 and 600 per kilogram (USD $127-$383 per pound), depending on the quantity and quality of the harvest.

Why don't they have truffle farms?

All attempts to grow truffles in artificial environments or from seed have so far failed to produce significant results, it would seem Mother Nature knows her stuff and is not prepared to give up her secrets so easily. Truffles are in fact totally spontaneous, cannot be farmed, and the precious nuggets prosper only in a symbiotic relationship with the roots of trees.

Truffle season lasts from September to December with the best times coming in the middle of this period. Foragers prefer to harvest at night, because the dogs are less disturbed by noises and because darkness"¦ protects the trufolau against curious eyes!

Are they as expensive in Italy as they are in the United States?

Fresh truffles should be quoted on the Stock Exchange along with gold and fuel oil. European truffles can sell in fact for a staggering $1,000-$2,000 a pound, which is part of the reason food-lovers experience the fungus so fleetingly in grated sprinkles. The record price paid for a single white truffle was set in December 2007, when Macau casino owner Stanley Ho paid US $330,000 for a specimen weighing 1.5 kilograms (3.3 lb), discovered by Mr. Luciano Savini, his son Cristiano and their dog Rocco.

One of the largest truffles found in decades, it was unearthed near Pisa and sold at an auction held simultaneously in Macau, Hong Kong and Florence.

If you are in a truffle growing area, can you just go out on your property and find them or do you have to go to a wooded area?

Those who gather truffles often have their own secret spots to search for them, and that usually requires getting permission from a private landowner. You don't need a big forest to hunt for mushrooms and tartufi. State forests and other public lands have designated mushroom-harvesting seasons, limits on how much a person can pick and other restrictions.

In general, rakes and other garden tools that could disturb the soil are prohibited on these lands, although small hand-made divots are OK as long as the hole is covered after digging. A dog trained to sniff out truffles is the best and most environmentally friendly way to hunt for them. Many trainers use truffle-scented cotton balls and actual pieces of truffle to condition dogs to the smell.

If the truffles found have no smell, they are probably not ripe and it may be best to refrain from picking them and to come back later. Although I've heard that some truffles can be ripened in a thick layer of brown-paper bags stored in a cool, dry place, or in sealable plastic bags with paper towels.

I'm wondering how important they are to Italians when in season. Let's say you are in Rome and don't have access to search for truffles, do families purchase them for cooking when in season or are they too expensive?

Truffles are a big deal all over Italy. Is it not just the Italian foodies who drool over them, they are a national experience. Late autumn spells truffles and mushrooms, so any serious restaurateur will do anything to get his hands on a prized nugget for his menu.

Home cooks often turn to the more affordable Black variety for their family preparations, and instead treat themselves to a few shaved scales of tartufo bianco at their favorite restaurants. My high-end gourmet foods dealer calls me every fall season with hushed tones and whispers the T word secretly. He always saves me a small white truffle whenever a few come into his shop from Alba. If I can afford it, I may buy one and then design a feast around the little smelly thing. Otherwise I turn to truffle-scented oil or wonderful little jars of truffle paste. But never frozen truffles, those I cannot abide by.

Fresh truffles should be used as soon as possible after purchasing but can be stored up to 3 days in the refrigerator. To take full advantage of their perfumy fragrance, bury them wrapped in a paper towel, in a glass container full of uncooked rice and cover tightly before refrigerating. The truffle fragrance will permeate the rice they're stored with, giving the cook a double-flavor bonus for future risotto.

Be sure to keep the container away from dairy products which tend to absorb fragrances.

Shortly prior to shaving it, gently brush any surface grit off the truffle with a very soft toothbrush under running cold water. And, if the thought of ingesting the skin of the dark species freaks you out, you can peel it (saving the peelings for soups or vegetable broths). White truffles should not be peeled. EVER!

The special truffle-slicer implement is used to shave off paper-thin slivers of tartufo to flavor cooked foods such as omelets, polenta, risottos, fondue or delicate sauces, and can be slivered at the last minute over literally anything, from a fried egg over easy, over a handful of boiled asparagus, or delicately seasoned salad or beef carpaccio.

I believe the best way to enjoy the full pang of flavorsome tartufi is in minimalism. I like to shave them thinly over a simple dish like fresh-possibly homemade-pasta, dressed with only a little butter and a light dash of grated Parmigiano. Tagliolini, angel hair, very delicate ribbony pasta are the best choices because they require little cooking time and this too adds to the simplicity of the operation.

What is about truffles you find so appealing? Is it like eating a strong stinky cheese that can just be amazing? Do you think it is an acquired taste?

I have heard some people say truffles taste like dirt and smell like a decaying swamp, goat pee, dead rat or cheese gone bad. So what is it about truffles that is so appealing?

It's all about a foul aroma, a nasty aroma-and some people just absolutely love it. I'm one of them. The allure of the truffle is a mystery. However horribly they may stink, I love the shaved sprinkles that bless my plate.

Tomorrow I will post Lola's Strozzapreti, Porcini, Zucca & Tartufo recipe featuring fresh truffles. For those of you who don't know what Strozzapreti & Zucca are, check in tomorrow after I look them up myself.

Thanks Lola for another wonderful interview and all the great information you offered us.

Where to Find Fresh Truffles and Truffle Products 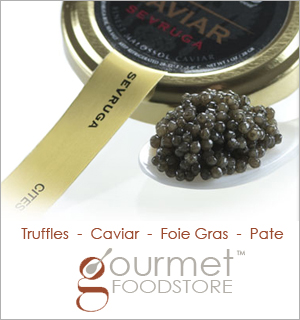 « The History of Thanksgiving
Pasta with Mushrooms, Pumpkin & Truffle Recipe »