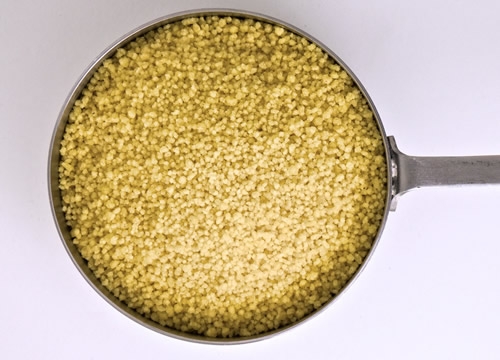 Couscous…so good they named it twice! We eat couscous a lot in our house, as a side dish and a fast alternative to pasta or rice. It’s certainly a funny name, and people always wonder what exactly this dish is.

A rice? A grain? I’ll admit that I couldn’t have guessed what couscous is either.

Who would have thought that couscous is actually just another form of pasta? Nutritionally, couscous is extremely similar to spaghetti—both contain two grams of dietary fiber and have about the same amount of calories (200) per serving.

Many people think that couscous is a grain, but the base of both couscous and certain pastas (like spaghetti and macaroni) is semolina, a course wheat middling of durum that is yellow in color.

Traditionally, the grains of couscous are then dried and steamed in a pretty intricate steaming vessel—known as a couscoussiére—to be served as a base or side dish.

How to Prepare It

I don’t know about you, but I certainly don’t have a couscoussiére lying around my kitchen. But the good news is that instant couscous is readily available to be bought commercially. It’s quick and easy to reconstitute couscous after buying it from a grocery store.

All you have to do is combine 1 ½ cups of water to every cup of couscous plus a half teaspoon of salt. Next, add the couscous before the water has boiled. Unlike pasta, couscous should never be boiled!

The water should be very hot but not boiling. Let sit for five minutes until the grains have swelled. Lastly, don’t forget to fluff the couscous once it’s done to prevent it from sticking together.

Commercially produced couscous—available as regular or whole wheat—is a fairly complicated process. I linked a video below so you can see how it’s done.

It is possible to make your own couscous at home with a food processor, but it takes a bit of practice to achieve the perfect grain size. However, if you have a couscoussiére at home, you can make perfect couscous as prepared in some of the finest restaurants.

When you use instant couscous and add water to it, you extract some of the starch causing the grains to stick together. Using a couscoussiére insures a moist and fluffy result. Check out this very cool video produced by Williams - Sonoma on making it at home.

How to Serve It

Think about the actual taste of pasta without any sauce—pretty bland right? Couscous is the same way, which is why it’s typically served underneath a more flavorful meat or vegetable dish or sweetened with raisins.

Couscous is nice and light and I like it mixed in with a summer salad of cucumbers and tomatoes or stuffed into hollowed-out peppers.

Couscous can be served as a side dish, as I did with my Veal Scallopini and Artichokes, or you can create your own dish by adding ingredients to make a nice curried couscous.

Where Does It Come From?

Some people argue that couscous is a traditional meal from Trapani, a city on the west coast of Sicily, but it is generally attributed to have originated in North Africa. Couscous is the traditional dish of the Berbers, the ethnic group of North Africa, who named the dish from their language to mean “well rolled” or “well formed.”

Couscous is a principal meal for Moroccans, Algerians, and Tunisians. The development of wheat farming in the 11th century spread the popularity of couscous to become a widely appreciated taste and texture, with many local variants all around the world.

The traditional North African serving of couscous uses lamb chops or skinless chicken pieces with chickpeas and a variety of spices.

One interesting thing I discovered is that there are three main types of couscous: Moroccan, Israeli, and Lebanese.

Moroccan couscous tends to be the tiniest grain and cooks the quickest. Most of us are familiar with this type of couscous and it is the most readily available.

I really like the Israeli or “pearl” couscous which take a little longer to cook because the pellets are about the size of peppercorns. I bought an Israeli style couscous blended with orzo, baby garbanzo beans, and red quinoa and used it as a side dish for my roasted Cornish Game Hens meal this past week.

Lebanese couscous grains are even larger than the Israeli pearls and cook slowly, similar to a risotto.I have never tried cooking with Lebanese couscous, but I just purchased some and will give it a try and let you know.