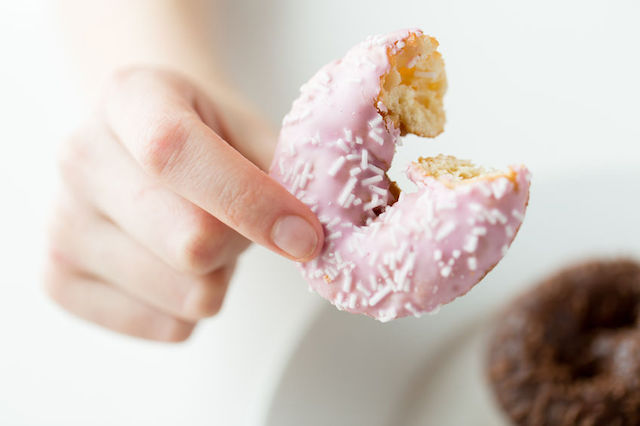 When people would ask me what I most nervous for when going to college, I wouldn’t say schoolwork, I wouldn’t say being away from home, I would say the freshman fifteen.  Everyone tells you it’s unavoidable and you just have to accept it.

You also don’t have to limit your food intake to nothing and live at the gym. You just have to be smart and learn how to resist certain urges.

Unfortunately, alcohol consumption is the number one cause of weight gain, which no college student wants to hear.  But don’t get your hope down, you can still avoid the unnecessary factors of the freshmen fifteen.

For example, late night snacks.  Who doesn’t want to stick some easy mac in the microwave when they come back from a night out and inhale it in two seconds?  People who don’t want the freshmen fifteen.

No ramen, no pizza, no buffalo wings, nothing.  If you can’t resist the temptation, don’t keep the food in your room in the first place.  And definitely don’t have Domino’s pizza on speed dial.

Late night snacks also translate to normal snacks.  Of course you want to come back from class and just lay in your bed with a bag of chips or cookies.  But that’s not doing you any good.  It also won’t keep you filled for long.

Instead, get some low-cal, healthy snacks like popcorn, or something that will fill you up and keep you full like peanut butter and fruit.  I can promise you that right after you eat an entire bag of potato chips or three cupcakes, no matter how good they are in the moment, you will regret it immediately after.

Most Important Meal of the Day?

As for meals, I am a true believer in breakfast being the most important meal of the day.  Eating a big, healthy breakfast in the morning ensures that you are not dying of hunger after your 10:05.  It also gets your digestive system going and ready to take on whatever else you eat that day.

When choosing meal plans, always go for the smaller one.  It will prevent you from ordering excessive lunches and dinner.  Also, just because there is pizza, french-fries and ice-cream available at every meal, doesn’t mean you should eat them every meal.

Ask yourself, what would my mom want me to eat.  Treat yourself once in a blue moon, but you will be happier if you eat a healthy well-balanced meal every day.  Science proves it.

When I’m stressed I like to stress eat.  A lot of times my stress food preference is ice cream, and before I know it I have finished the entire thing.  Luckily someone invented the 300 calorie pint of ice-cream, where you can eat as much as you want and not feel guilty.  Isn’t chocolate healthy for you anyways?

Don't Be Afraid of a Little Exercise

Last but not least, you need to exercise to avoid the freshmen fifteen.  As I said, you don’t need to live at the gym, but do make it part of your weekly (maybe daily or every other day) routine.  It’s not as hard as it sounds though, especially on a college campus.

There are so many FREE classes going on that you can drag your friends too and have a blast.  Just make yourself a good playlist and it won’t feel like torture every time.

The freshmen fifteen is avoidable as long as you avoid it.  Considering you’re in college, you’re smart enough to know what is good for you and what isn’t so nothing comes as a surprise.

The hardest part is resisting those late night urges and stress eating.