Have You Ever Heard of Baby Flounder?

Today I went to one of two of my favorite local fish markets called Bywood Seafood Market and asked the owner, Bill, what recommended for tonight's dinner. He suggested the “baby flounder” that was sitting right next to the regular flounder which I soon learned was really fluke or as he called it, “fluke flounder”.

Confused? I thought I had it figured out when I wrote a post called Fluke or Flunder - What Is the Difference but now I’m hearing about “baby flounder”.  How great is this?

I did a quick search on Google and couldn’t find much on “baby flounder” except the expected Wikipedia article on flounder, a bunch of fishing sites and even a flounder costume on Pinterest. Most of the articles I read talk about baby flounder in regards to size and age but that’s not what I was looking for.

Where Does Baby Flounder Come From?

So I called fishmonger Bill and asked him for more details. He said “baby flounder” has nothing to do with the age of the fish or even the size although they did appear smaller than the fluke flounder. He explained this is a species of flounder that come from the Grand Banks of Newfoundland, a relatively shallow group of underwater plateaus just south and east of Newfoundland.

It’s here where the cold waters of the Labrador Current from the north mix with the warm waters coming from the gulf stream. Combine that with the shape of the ocean floor and the abundant nutrients available, you have one of the richest fishing grounds in the world. 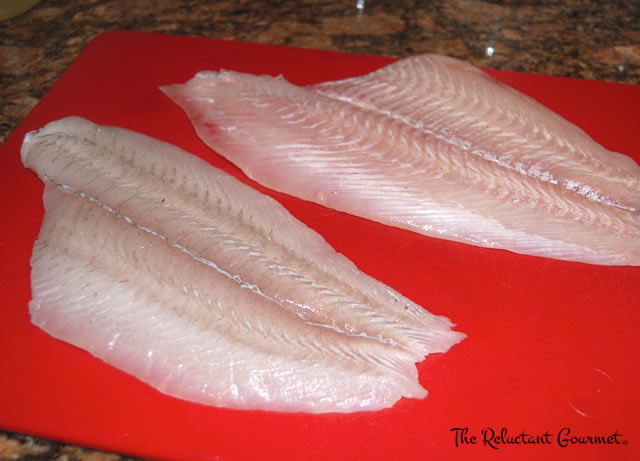 So I look up “Grand Banks Baby Flounder”  on Google and what do I get back? Not much and almost nothing about “baby flounder” but more about “yellowtail flounder”.  Seems everything I find about flounder in the Grand Banks has to do with Yellowtail Flounder. According to animals.pawnation.com,

Yellowtail flounder … are rusty yellow to olive in color and have red spots on their scales. They grow up to 22 inches in length and weigh around 2 pounds. Yellowtail flounder are found swimming around sandy ocean bottoms of 120 to 300 feet deep.

Is yellowtail flounder the same as baby flounder?  I’m still not sure and will continue to ask whenever I talk to chefs or fishmonger friends but I’m not really that concerned. I’ll give it a coating of flour and pan fry it in some butter with some fresh lemon juice like I would fluke or flounder and see how it goes. (Pan Fried Flounder with Potatoes)

Or I may look for another recipe on the Internet that suggests using Baby Flounder and yes, there are a few of them listed.

How Does Baby Flounder Taste?

I asked Bill at Bywood Seafoods this question and he said it is a little milder than fluke which is hard for me to imagine. I think fluke and flounder are some of the most mild tasting fish I’ve ever eaten but then he said it was a little like sole, another flatfish belonging to a whole bunch of fish families and is incredibly mild.

You may have heard of Dover sole from Europe but there is American sole (Achiridae), lemon sole, Pacific Dover sole and a few more. If you do a search on Wikipedia for sole, you can find a table at the bottom with all the different groups of flatfish and their species.

So if you see “baby flounder” at your fish market, do me a favor and pepper the fish person with questions and let me know what he or she has to say.