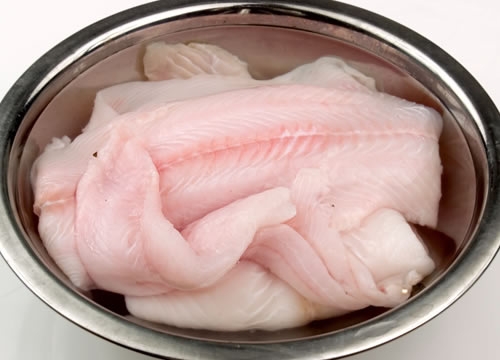 The other day I purchased what I thought were gorgeous looking shark filets for grilling. They were on sale at a ridiculously good price, which should have been my first clue something may not be right, but I have purchased a lot of fish on sale before with no problems.

I've been told by fishmongers I trust that supermarket chains sometimes buy too much of one item and then have to put it on sale to move it. Other times they put an item on sale so they can advertise it in the paper to get people in the store or so they can make one of those annoying announcements over the speakers while you are in the store.

This is why it is so important to find a fish store or supermarket you like and get to know the person running each department. Build a relationship with your fishmonger or butcher and they will typically steer you in the right direction, making sure you get quality product and the best sales. In this case I didn't follow my own advice. I purchased the fish at a supermarket chain whose fish department doesn't usually "wow" me, from a person behind the counter I did not know.

They told me the filets were black tip shark, great for grilling and tasted like swordfish that was selling at a significantly higher price. The filets looked great as you can see in the above photo and when I brought them home, they smelled fine.

I seasoned them with a little olive oil, salt & pepper and threw them on my gas grill being careful not to overcook them. We like our fish medium, especially if we are serving it to the kids.

When I made my first cut into the fish for that first bite, I knew something wasn't right. The fish did not flake apart like I expected. When I took that first bite, the meat was very tough, tasted mealy and was almost inedible. When I say inedible, I don't mean the fish was turned but chewy"¦.not at all what I expected.

I thought maybe I didn't cook it right or was I supposed to marinate it for a few hours so I emailed my friend Chef Alan Bickel with my own Ask A Chef Question.

I wrote, "Chef, what did I do wrong?  Is it my cooking technique or the fish? And if it was the fish, what was wrong with it? It looked great at the market."

Here is what Chef Alan replied back to me:

"I have experienced what I think you're referring to, although it has always been with swordfish in my case. It is almost a 'grainy' texture in the mouth, almost as if you were trying to chew finely ground up sandpaper?

In addition, I find the surface of the steaks have almost a sandy feel and not as firm as normal for a dense fish of that kind. As far as flavor profile goes, in a case like this there's a very bland, depthless feel to it, instead of a full characteristic flavor.

If this is something akin to what you're talking about, my research leads me to a term known as a 'jellied' condition in the meat.  The references have all been vague, so I'm not 100% certain on the name, but the apparent cause of this is a lack of protein in the fish, resulting from an inability to replace lost nutrients after spawning, especially in fish living in extremely cold water.

Again, I'm not entirely certain about the particular name of this condition, or if the condition describes is what we're talking about, but I will continue to look into this, perhaps throw the question around to a few Chefs in my circle, and I'll let you know if I come up with anything else."

Once I knew there was a condition called "jellied" I was able to do some Internet research of my own and found out a little more about what Chef Alan was talking about.

I found a site called Fisheries and Oceans Canada that talked about the Witch Flounder. They said, "A biological assessment of this stock in 1978 indicated the presence of very large old fish up to 26 years of age in the landings. Many of these old fish had to be discarded because of their "jellied" condition and generally poor quality. During spawning season these fish do not feed much, if at all, and the energy required for survival has to be obtained from the body of the fish, leaving behind a soft "jellied" flesh useless for marketing. This condition does not occur in the younger fish."

At the University of Miami Rosenstiel School of Marine and Atmospheric Science I read a response to the question:

"Some time ago I caught a broadbill swordfish off No Man's Land, Massachusetts. It appeared normal in every respect and weighed about 350 pounds. However, at the market I was told that the fish was a "jellied" type. The meat presented a mealy, soft appearance. Could you tell me what is known about this disease or condition?"

"Jellied condition in fishes has several causes. In a recent study of this condition in flounder it was attributed to lack of protein, due to the failure of fish living in very cold water to recover body protein loss after spawning and absorbing water to replace it. In swordfish, tuna and other large pelagic fishes it seems to be caused by parasites."

Oh no, I hope my shark didn't have parasites and was just an old codger!

So be careful when buying any kind of seafood. I'll ask Chef Alan for a list of things to be observant of when buying fresh or thawed frozen fish at the market but again, I highly recommend you get to know the person who is selling you your fish. It just may save you some money and aggravation.

If any of you have your own personal fish stories, please post them in the reply area below. We can all learn from each others mistakes.

« My Costco Connection
Getting Your Kids To Eat What You Cook »