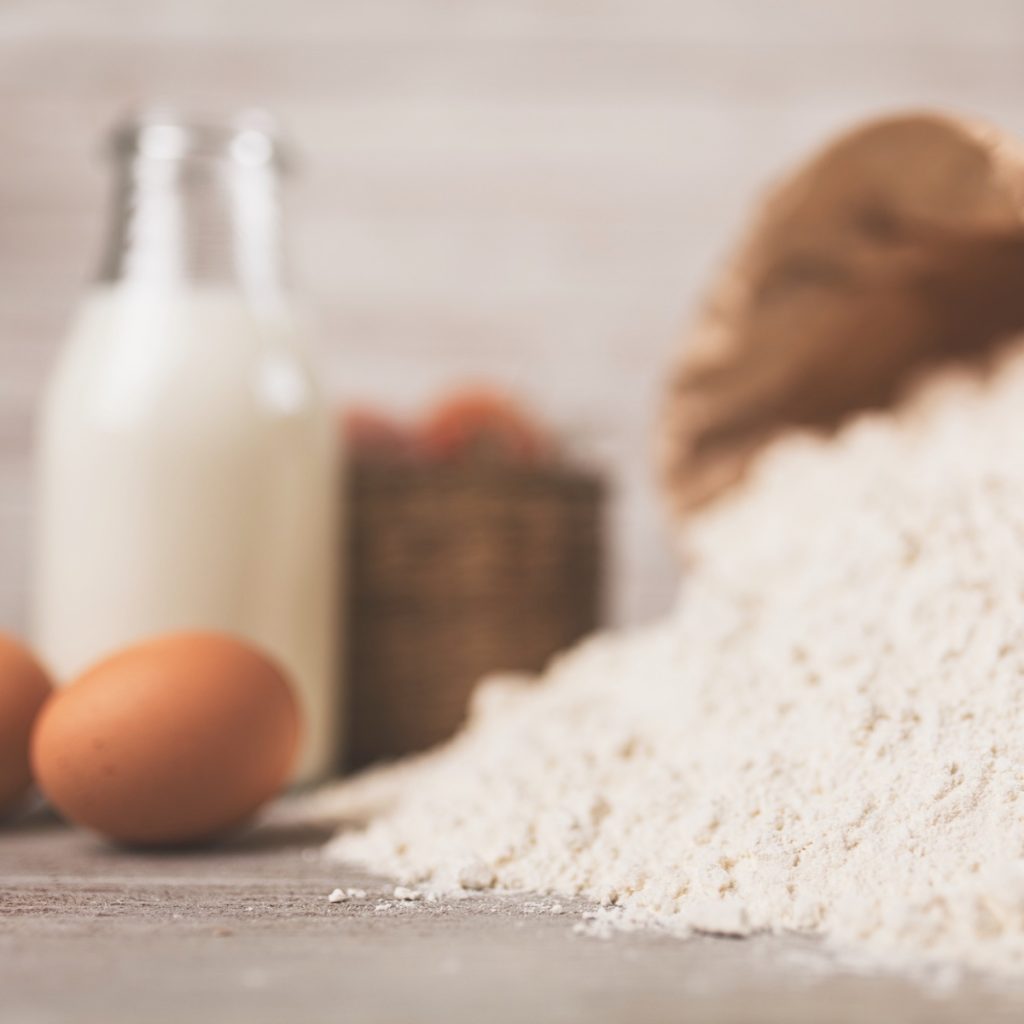 As I described in How to Make Bread and then again in Basic Bread Recipe, most bread recipes include 4 ingredients (not counting the sugar that the yeast ate) and a very straightforward mixing method.

There are infinite types of yeast breads out in the world, everything from bagels to pizza, focaccia to cinnamon rolls, cheese bread to the laminated yeast dough croissants.

If you study the recipes carefully, though, you will find that they are all based on these four bread making ingredients. Yes, substitutions and additions can and should be made, but the basic four ingredients stand.

Now, let’s take a look at some of those substitutions and additions, as well as some tweaks to our baking procedure to give us exactly the taste and texture that we want.

Yeast are single celled organisms that live solely to eat sugars, give off gasses, and reproduce. In the US, your choices for yeast are fresh, or cake, yeast, active dry yeast and instant, or rapid rise yeast. For a home baker, fresh yeast is difficult to find, can get moldy if left too long in the refrigerator, and can be temperamental. Many bakers swear by fresh yeast, but there are more standardized choices for the home baker.

Rapid rise, or instant yeast, is a relatively new type of dried yeast. It can be added along with dry ingredients without the need for proofing, and it produces a very rapid rise. However, what you gain in time, you lose in flavor, so the third choice is probably the best.

Active dry yeast is just that—active yeast that are dormant until you add them to water. Active dry yeast does better if you proof it first—add it to slightly warm water with a bit of sweetener (for food) until it gets bubbly and creamy. When using a recipe that calls for fresh yeast, use ⅓ to ½ of what is called for. For example, for 1 oz. of fresh yeast, you will use ⅓-1/2 ounce (approximately 9-14 grams) of active dry yeast.

Flour provides bulk and structure to the bread. Wheat flour, specifically, contains two proteins, gliadin and glutenin which, in the presence of water, combine and produce gluten, the stretchy protein substance that lets wheat breads rise, rise, rise, and then set, locking in the cells where the air bubbles used to be.

The higher the protein content of the flour, the more gliadin and glutenin are in it, and the more gluten will form. The flours highest in protein are made with hard winter wheat. Look for them labeled as Bread Flour or even High Gluten flour.

Our standard recipe contains white bread flour. Many other types of flours can be substituted for part or all of the bread flour. Keep in mind that white bread flour will contain the most gluten, so breads made with a mixture of other flours will be more dense and will not rise as high.

Some types of flour, such as rice and corn flour, do not contain any gluten, so to get a decent rise, you must use at least part white bread flour. Other flours you can use include whole wheat, rye, buckwheat, chickpea, bean flours, sprouted wheat, spelt, oat and soy. I am certain that there are others out there, as well.

Fat that is incorporated in bread dough will inhibit gluten formation. The resulting loaf will not rise quite as high as a loaf made without fat. On the positive side, fats, especially butter and olive oil, add a lot of flavor to the finished product.

Fats keep the crumb tender and can help improve the shelf life of your bread by a day or so. Almost any fat can be added to a bread dough.

Eggs added to dough help with rising. A bread dough rich with egg will rise very high, because eggs are a leavening agent (think genoise or angel food cake). As well, the fats from the yolk help to tenderize the crumb and lighten the texture a bit. Eggs also contain the emulsifier lecithin. Lecithin can add to the overall consistency of the loaf.

Adding more sugar to a recipe than the yeast can eat will, no surprise, add sweetness to the finished product. Sugar aids in browning, can help tenderize the bread and also holds onto moisture to help inhibit staling.

Be careful, though—too much sugar will severely inhibit gluten production. So, unless you plan on adding additional gluten to the dough (in the form of vital wheat gluten or gluten flour), keep the sugar in the recipe to no more than 2 tablespoons/cup of flour.

Saltgives bread flavor, and it also inhibits yeast growth. This might sound counterintuitive, but without the presence of some salt, yeast growth will continue until the flour matrix can no longer support it, and your bread will deflate. Too much salt, and your yeast won’t give you enough rise. Too little, and your bread will rise too much. The trick is in getting the right salt to yeast ratio.

Water provides for gluten formation and yeast reproduction. Without water (either straight water or as a component of another liquid, such as milk), all you have is a pile of flour, salt and yeast. No amount of tossing together will yield a dough unless water is added to the mix. Water re hydrates yeast and activates gluten formation. For bread making, harder water works better than soft water because harder water will yield more stable dough. 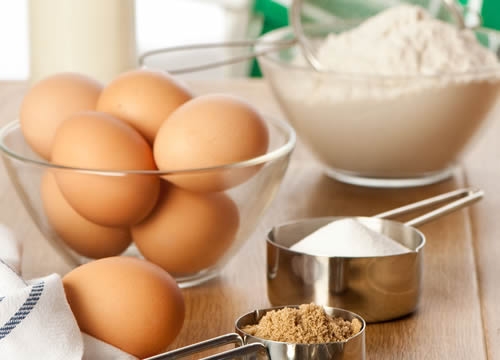 We’ve already established that liquid is necessary bread making ingredient, but that doesn’t mean we are limited to water. Replacing all or part of the water with milk will lend itself to a more tender, sweeter product.

The sugar in milk, lactose, is not eaten by the yeast, so it is left to add a subtle sweetness to the finished bread. Milk also increases the nutritional value of the bread by adding additional proteins. A dough made with milk will brown more readily than one made with water.

This is where you, the baker, can get creative. If you are making a savory bread, you can add in anything from shredded cheese to roasted garlic to nuts to olives to, well, almost anything.

If you are making a sweet bread, all sorts of toasted nuts and dried fruits can be added. And don’t forget about herbs and spices, either.

The Crust of the Matter

Even using the same recipe, it is possible to get a different crust just by doing one of the following:

Crackly, shiny crust: This is brought about by steam. If you don’t have a steam injector in your oven, you are not alone. I’ve heard of lots of different ways to get a really good steamy, humid atmosphere in your oven: boiling water in a cast iron skillet in the bottom of the oven, throwing ice chips into a cast iron skillet in the bottom of your oven, spraying the dough with water before putting it in the oven—I’m sure you can think of more ways.

For optimum crackliness, spray the dough and use one of the other methods. The water gelatinizes the starches on the outside of the dough, and this helps result in a crackly crust. You can also use a wash of water with a little cornstarch mixed in during the last five minutes of baking.

Soft crust: This is as easy as not introducing extra steam or water. Don’t spray the dough, and don’t make steam. Another way of getting a soft crust and also imparting some flavor is to brush the crust with butter when you remove it from the oven.

Golden, shiny crust: Apply an egg wash (egg and a little water beaten together) before baking, being careful not to let the egg wash get on the rim of the baking pan as this could, in essence, glue the bread down and inhibit a full rise.

Soft, sweet crust: brush with milk with a little sugar dissolved in it before baking.

Sweet, sticky crust: brush the crust with simple syrup or honey right when it comes out of the oven

Shiny, soft crust: brush the bread with olive oil before and after baking

The single most important thing in making flavorful bread is time. It takes time for yeast to completely run its life cycle and develop a complex flavor in the final product.

While it is possible to get reasonably good bread with just a single rise, the more ways you can find to give the yeast time to do their thing, the better your bread will be.

Ways to increase the time it takes to make a loaf from start to finish include slower, cooler rises, refrigerating the dough overnight and using some leftover dough from a day or two before as part of your mix. You can also make a sponge and let it rest for several hours before continuing.

A sponge is just a loose mixture that you make by combining your yeast, liquid and half of your flour. After the sponge has “worked” for 2-3 hours, you can add the rest of the flour and continue with the recipe.

I hope that you now feel armed to approach bread baking with less trepidation. Now that you know the function of all the bread making ingredients, the process of making it and have a good very basic recipe with which to practice, it is time to practice and “get a feel for” dough that is ready to be kneaded and dough that has been kneaded enough.

Once you can leap those two confidence hurdles, there will be no stopping you.

« How to Make Beef Stock at Home
Bread Pudding Recipe »