Burrata Cheese - Have you heard of it? I can't imagine why not!

I'm sure you've heard people say "Everything old is new again" and , "There's a difference between a fad and a classic."  Usually these statements apply to fashion and design, but I think it can also apply to food.

It seems like every year there is an "It Food."  The one that you can't avoid, whether you're at a 5 star restaurant or at a diner.  Foods that are whispered about reverently by foodies; foods that star in their own 12-page glossy magazine spreads; foods that all the television chefs are showing you how to make.

One year, the It Food was pesto.  It was on everything and in everything.  I'd be willing to bet that food processor sales went up that year because everyone was on the pesto train.

Don't get me wrong, I do like pesto, very much in fact.  But you can only take so much of the same food before you start to suffer from palate fatigue.

Except for extra virgin olive oil, an "It Food" made popular by Rachel Ray when she created the catchphrase "EVOO".   But that's for another post.

Recently, by the way, pesto seems to be making a comeback as a way to use up parsley, cilantro or even kale.  Whir up some greens with Parmesan, some garlic, olive oil and nuts, and you have an simple sauce that can go with pasta or even be whisked into a salad dressing.

I just read a great article about the origins of pesto so it may be making yet another comeback as an It Food and of course I'll be writing about it.

Another year, everyone was singing the praises of aioli.  Even chain restaurants jumped on that bandwagon by blending a little garlic into their store-bought mayo.  True aioli connoisseurs would sniff at such a thing, but when you're dealing with an It Food, tempers can get pretty heated.

Back in the mid-90's Rick Bayless almost singlehandedly made Mexican food--the entirety of it--an It Food.  Bobby Flay did the same for Tex-Mex flavors back in the late '80's and early 90's.  Remember the zigzag of sauces on a plate?  Credit that to, or blame it on, Bobby Flay.

A Couple of New "It Foods"

So what's this year's "It Food".  I think it's a tie between cupcakes and buratta. Everyone has heard of cupcakes and knows what they taste like, but buratta?

I had no idea what it was either until I had some at Vetri's the other evening in a dish with Chanterelles and watercress.  I had to ask the waiter what it was.

Maybe I'm just out of the loop. I did a search for "burrata cheese" and found a recipe for heirloom tomatoes and burrata cheese salad in Bon Appetit back in 2006. So it has been around in the US for at least five years, but I don't remember seeing that much written about it before this year.

Now I'm seeing it everywhere! In cooking magazines, restaurants, featured at my local cheese shop. How did I miss this exquisite Italian cheese made with mozzarella and cream and named after the Italian word for buttery. (Who wouldn't love a cheese whose name means buttery)?

I know it didn't arrive in America this year. Was it hiding on the shelves or was I just not looking for it?   Regardless, as far as I'm concerned, buratta is the savory "It Food" for 2011.

So, if you're not a part of the It Food cognoscenti, let me tell you a little about buratta.

It is made in Italy, and it is basically a hollow ball of mozzarella that is stuffed with bits of mozzarella and cream.  The mozzarella bits are left over from the cheese making process.

When you slice into buratta, the cream and mozzarella bits kind of ooze out, ready to be soaked up by some crusty bread or some fresh heirloom tomatoes.

Buratta is a young cheese in many ways.  It is a fresh cheese, which means that it is not overly rich, but rather milky, sweet and creamy.  And while many of Italy's world famous cheeses have been produced for hundreds if not thousands of years, buratta was born in 1920.

The Bianchini family invented this cheese, almost certainly as a way to minimize waste (and increase profits).  The Bianchinis farmed in the Apulia district of Italy, in the heel of Italy's boot, and for years, folks who lived near the farm were the only people who could enjoy buratta.  It was truly a local product.

Eventually, some nearby factories began producing buratta, again as a way to use up scraps from the mozzarella making process.  And, like all good things, eventually word got out, and now it is exported to the United States.

But it is still a very delicate cheese with a very short shelf life.  If you are lucky enough to find some, you should eat it within 48 hours of getting it home.  Not that it should be a problem; it is really that good.

I served my buratta cheese as part of a classic Caprese Salad with olives.  As I said, at Vetri, they served it in a salad with chanterelles and watercress.  The sweet creaminess of the buratta pairs really well with earthy and/or sharp flavors, such as the Vetri's chanterelles and my tomatoes and olives.

And remember the sentence, "There's a difference between a fad and a classic?"  Buratta is definitely a classic.  And since it is still fairly rare in the United States, I don't think it will be going out of style--or losing its status as an It Food--any time soon.

Start with some fresh heirloom tomatoes like the ones above. 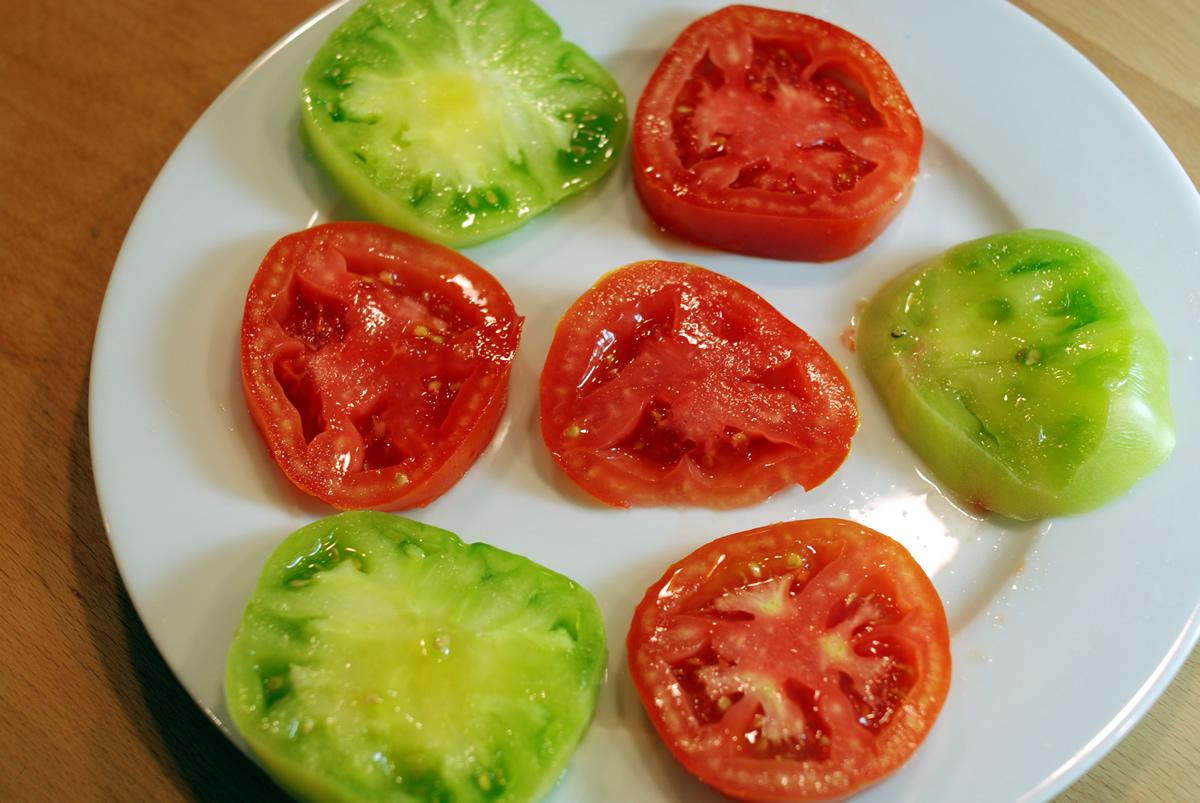 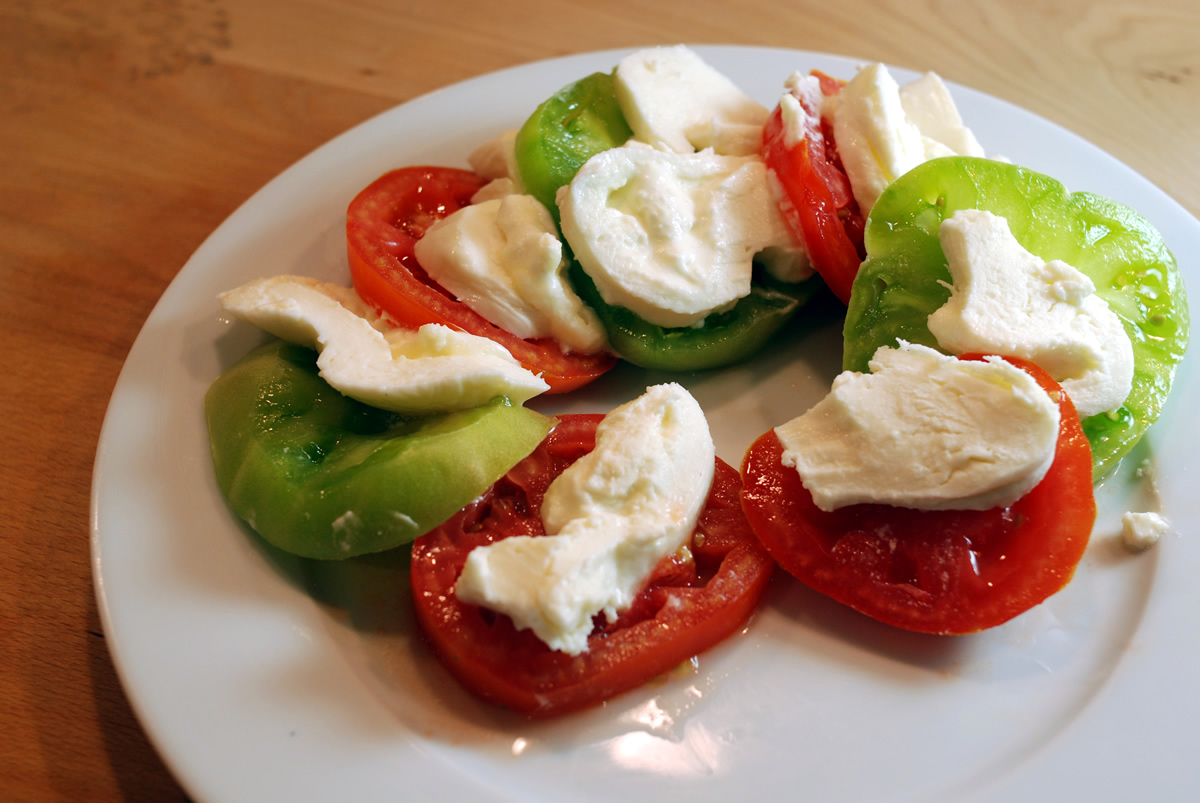 Add some basil and barrata cheese. 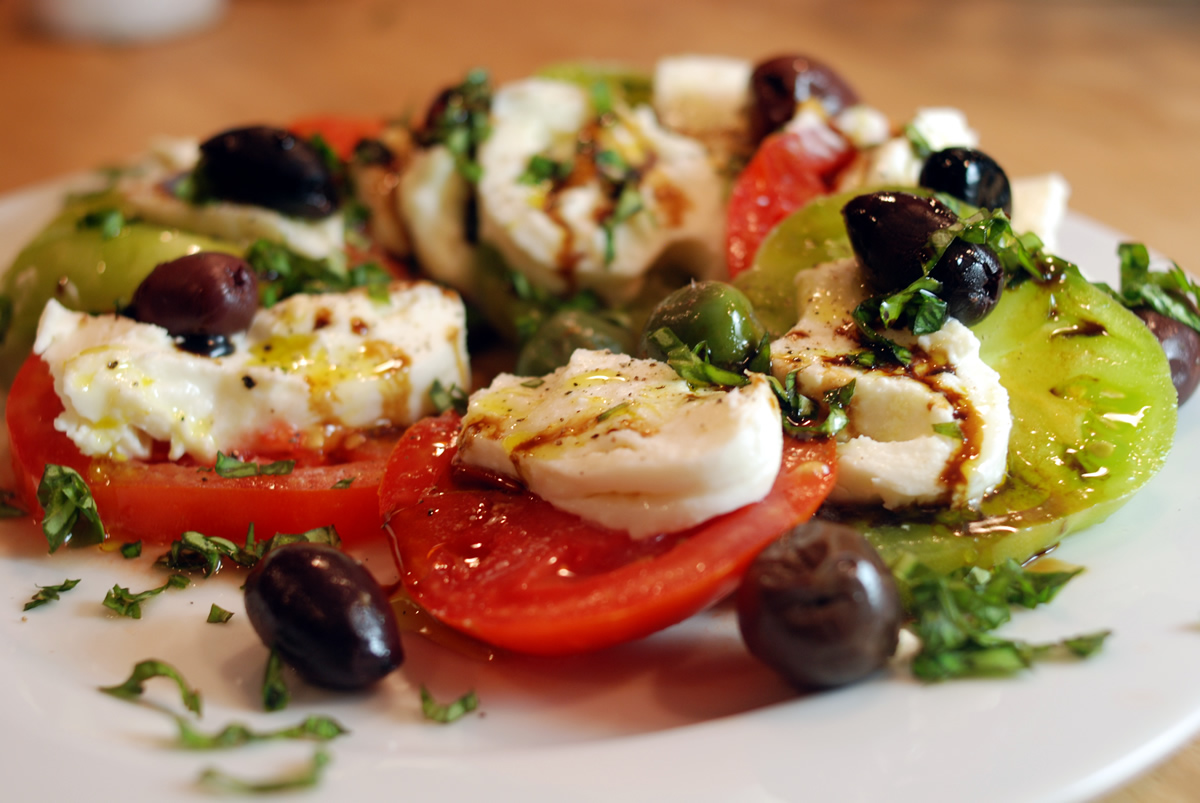 Sprinkle fresh cut basil over top. Season with good extra virgin olive oil and the best balsamic vinegar you can afford.  Not classic, but I added some pitted kalamata olives and then seasoned with salt and pepper.

How can you go wrong with fresh tomatoes, great olive oil and balsamic vinegar and then add freshly made baratta cheese? This is an amazing summer salad.

How they Make Burrata Video

I found this amazing video from Di Bruno Bros. VP Emilio Mignucci explaining how burrata is made at their warehouse in South Philadelphia.This is the same burrata that I purchase at my local farmers market.