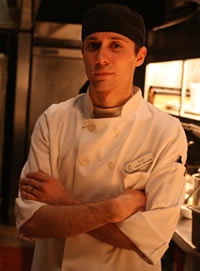 I met Alan online when he emailed me about my site. We traded emails back and forth talking about food and his thoughts on different culinary topics when I asked him if would like to write an article about what it is like behind the scenes of a busy restaurant in a large resort.

His article, The 'Rest' in Restaurants is a must read for anyone who enjoys cooking and dining out. I am looking forward to more of Alan's articles. He is not only a great cook, but a great writer too.

The first real meal I remember cooking was for my French class in high school. We were having a sort of "Cultural Day" where everyone was supposed to bring in something having to do with France. I decided to make Coq Au Vin, just because it sounded cool, and it had a bunch of wine in it, but I had no idea how to go about cooking it.

Back then, looking at a recipe was on par with trying to translate the Dead Sea Scrolls, but luckily my mother was there to bail me out. She walked me through it, and although the end result was less than perfect, I thought it was a blast, and had a lot of fun with it.

After that, it was not until a few years later in my junior year of high school that I got my first job as a cook. It was for a 'Mom and Pop' kinda place, called Uncle Charlie's Pizza Pub, and I spent about a year and a half slinging pies and cooking burgers and the like.

What made you decide to become Professional Cook?

Working at Uncle Charlie's was what made me really think about cooking for a living. I loved the atmosphere, hot, greasy, loud, and hectic, and it seemed like a lot more fun than any of the other jobs I'd had in the past.

I knew that I didn't want some kind of office job, where I had to wake up early and look nice, and deal with suits and ties, and the kitchen seemed like a pretty good escape from that type of environment.

It allowed me the freedom to stay out late and party (which there was quite a lot of that giong on back in those days,) everyone there worked in jeans and a t-shirt, and there was always something good to eat for free.

I attended a small private college by the name of Mercyhurst Culinary and Wine Institute in northern Pennsylvania. It was about forty five minutes from my home in Edinboro, and although it was a religious school, they weren't very pushy with it, and it was also the only culinary program anywhere near where I lived.

Classes there were relatively small, with only about 15-18 people in the culinary courses, and we all studied under a team of three Executive Chefs.

The entire experience was something that changed not only the way I thought about food, but realy, the way I lived my life... Aside from the routine college hi-jinks, I learned that what I really wanted to do was become a bad-ass cook and open my own place someday.

Throughout my college years, I worked at a number of different restaurants, and had the opportunity to work with one of the Chefs from school in some independent restaurant settings.

I followed him to Chautuqua, NY, where a number of us went to live and work for the summer, and the year after that, the same group, Chef Milster included, packed up our thing and spent a few months living in Harbor Beach, MI.

It was a little one-horse kind of town, about two hours north of Detroit, where we were working at a private resort for the insanely rich. The community where the restaurant was located was directly on Lake Huron, and these $2-3 million homes were more like summer cottages to these folks.

We served breakfast, lunch, and dinner, and took turns as acting 'Chef of the Day' while the restaurant was in operation. Basically, what this entailed was that Chef Mik would give us an outline of what he wanted on the menu for the day, and whoever was running the show that day was responsible for making sure that everything was prepared, cooked, and presented effectively.

From there, I finished my schooling with an Internship at the Gaylord Opryland Resort & Convention Center, where I have been employed for approximately two and a half years.

100% yes. I love the work that I do, the opportunities to continue learning and improving myself every day, and the deep sense of personal accomplishment that I get from cooking. I simply can't imagine doing anything else for a living.

Don't be afraid to experiment!! if you get a crazy notion to start cooking your chicken with bananas, roll with it... there are infinite possibilities when it comes to food, and you'll never know what's good if you don't play around a little.

Never, Never, Never skimp when it comes to the kitchen. Good food comes from working with quality ingredients and equipment, and you should never sacrifice the integrity of what you want to do just because Wal-Mart had a 972-piece kitchen-in-a-box- for twenty dollars.

Yeah, the good stuff is a little pricy, but it's worth it, and if properly cared for, will last for decades. (and hey, if your budget's a little tight, that's what Christmas and Birthdays are for!)

Itwould have to be the Cuisinart, or food processor. Whether it's making purees for soup, a coulis, or even a milkshake, there are probably a hundred thousand things you can use it for. It has been an invaluable addition to my home kitchen, as well as every commercial kitchen I've ever been in.

Off the top of my head, there's a ton of practical jokes, conversations, and pranks that come to mind, but the one that sticks out the most happened over a period of about a week. The bathrooms in Cascade's kitchen are pretty nightmare-ish, they get used y about 20 people a day, and for a few days, someone was using icy-hot, or Gold Bond Powder, pretty heavily.

About every other day, someone would come hopping out of the men's room, screaming bloody murder, almost in tears because whatever it was had gotten on the toilet seat, and causing some serious problems.

The night it happened to our Senior Sous, he couldn't sit for almost half an hour, and ended up standing in our walk in freezer with an ice pack down the from of his pants, doing a little jig, and making comment's about Johnny Cash and the 'Ring of Fire' while the rest of the cooks were in tears of laughter at his little problem...

As with many things in life, it's hard to list just one thing as a favorite, the best I can do is to probably narrow it down a little to a group of foods. That, of course, being anything in te vegetable family.

Sure, meats are delicious, and any number of seafood and fish items can be turned into a myriad of dishes, but for me, vegetables like squashes, tomatoes, diakon radishes, cucumbers, bok choy, rhubarb, leafy greens, scallions, and shallots can all be used to turn any protein or starch into a delicious meal.

Perhaps it's from growing up in a mainly vegetarian household, but I find that they can be used as not only a side dish, but also turned into soups, sauces, and meals unto themselves.

The meaty squash family holds a special place for me, whether roasted and stuffed, pureed into bisques, sauteed to compliment a tender cut of filet Mignon, or oiled and grilled on the back patio for a delicious summer meal.

Another point I'd like to make here is that they are oh so simple to work with, because all really don't have to do much to them to enjoy their natural flavors. something as simple as salt can make heirloom tomatoes Pop with flavor, most of them can be enjoyed right out of the ground as they are.

I could easily write volumes here singing the praises of every vegetable that I love, bore people to tears with my love of summer salads, and rattle off all of the green bean casseroles an mashed potatoes that Americans expect to see at holidays, but for now, I think It wil suffice to simply say, Veggies are Great.

What do you eat at home?

Surprisingly, I really don't a whole lot of cooking at home these days. Mostly because of my work schedule, but my fiancee and I tend to stick to simple dinners, mostly chicken and vegetables, although now that the cool summer berries are beginning to show up, our fridge is always stocked with fresh watermelon and strawberries, and we're anxiously awaiting the arrival of some good Georgia peaches and pears.

Other than that, we'll do some steak every now and then, usually salads of some sort, and surprise, pizza. I'm still a sucker for a tasty pie, and here in Music City, USA there are quite a number of local shops who do a pretty good job, as well as some great Sushi Joints, (for when I don't feel like making it for myself.)

« What It Takes To Be A Pastry Chef
Chef Leslie Bilderback »