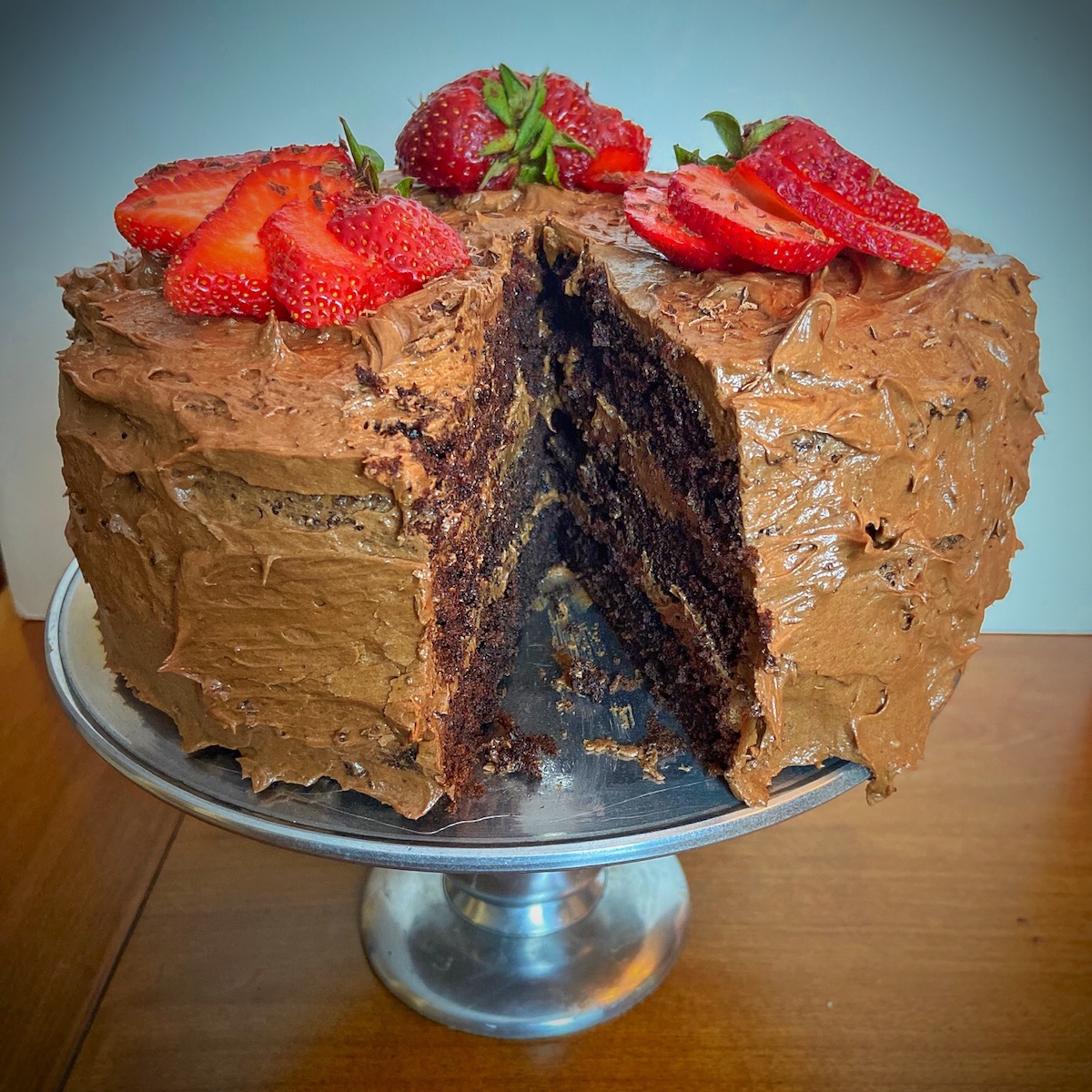 The Reluctant Gourmet is not much of a dessert person, but he does have two favorites: key lime pie and pineapple upside down cake.  So for his birthday recently, we made him a chocolate three layer cake (!).

“What were we thinking?” you ask.  We were thinking that we, the makers and bakers of the dessert, prefer chocolate.    So that was the deciding factor that tilted the scale toward what ended up being quite a journey.

Maddie found a recipe that she thought was pretty interesting and I thought was a lot of effort.  I tend to shy away from making layer cakes, mostly because the icing never ends up looking the way I think it should.

My other attempts at layer cake involved the birthdays of my daughters, so in all likelihood I didn’t start the baking until the day of the party and then tried to do too much and then rushed to get the cakes done.

Which means, the layers weren’t cool enough to frost so I pulled up crumbs as I applied the frosting  and just made a horrible looking mess.  After you do that a couple of times, you find the phone number of the local baker and get the order in ahead of time.

And another thing.  I was a busy working mother, so the idea of STARTING FROM SCRATCH was a bridge too far.

I was very much the boxed cake mix/tub of frosting kind of gal.  So when Maddie and I settled on layer cake for the RG celebration, I was all set to choose between Duncan Hines and Betty Crocker.

But no, Maddie would have none of that.  From scratch it would be.  Plus, we were sheltering in place with time on our hands so, why not?

No Boxed Cake for Maddie

Maddie did a little internet research and found a recipe on Tasty.co that pretty much lined up ingredient-wise with what we had on hand, including a couple of things I don’t typically associate with cake:  stout and mayonnaise.  Yum, right?!

We started a day ahead of time so that we would not run into my historic frosting problem.   Preparing the cake batter is a three step process:  sifting together the dry ingredients in one bowl, combining the liquid ingredients to set aside, and creaming the butter, sugar, eggs and mayonnaise in yet another vessel.

This amount of process is exactly what drives me to the baking aisle of the grocery store for the box, but as it happened, the process saved the day.  We diligently greased each of the three round cake pans, cut parchment paper for the bottoms of the pans, and set aside.

Then we sifted together the flour, unsweetened cocoa powder (we had Hershey’s on the shelf although the sophisticated baker might look for something Dutch processed….) , salt, baking soda and baking powder.

So I put a third of the flour in the sifter, follow by half of the cocoa powder, then half each of the salt, baking powder and baking soda, then back to another third of the flour, etc.  This is probably completely unnecessary but it’s one of my quirks that I hold on to.

After we finish sifting, we poured a 12 oz. bottle of stout in a large measuring cup and mixed in one tablespoon each of vanilla extract and finely ground espresso beans.  If you have espresso powder on hand, that would work too.  We also set this aside. 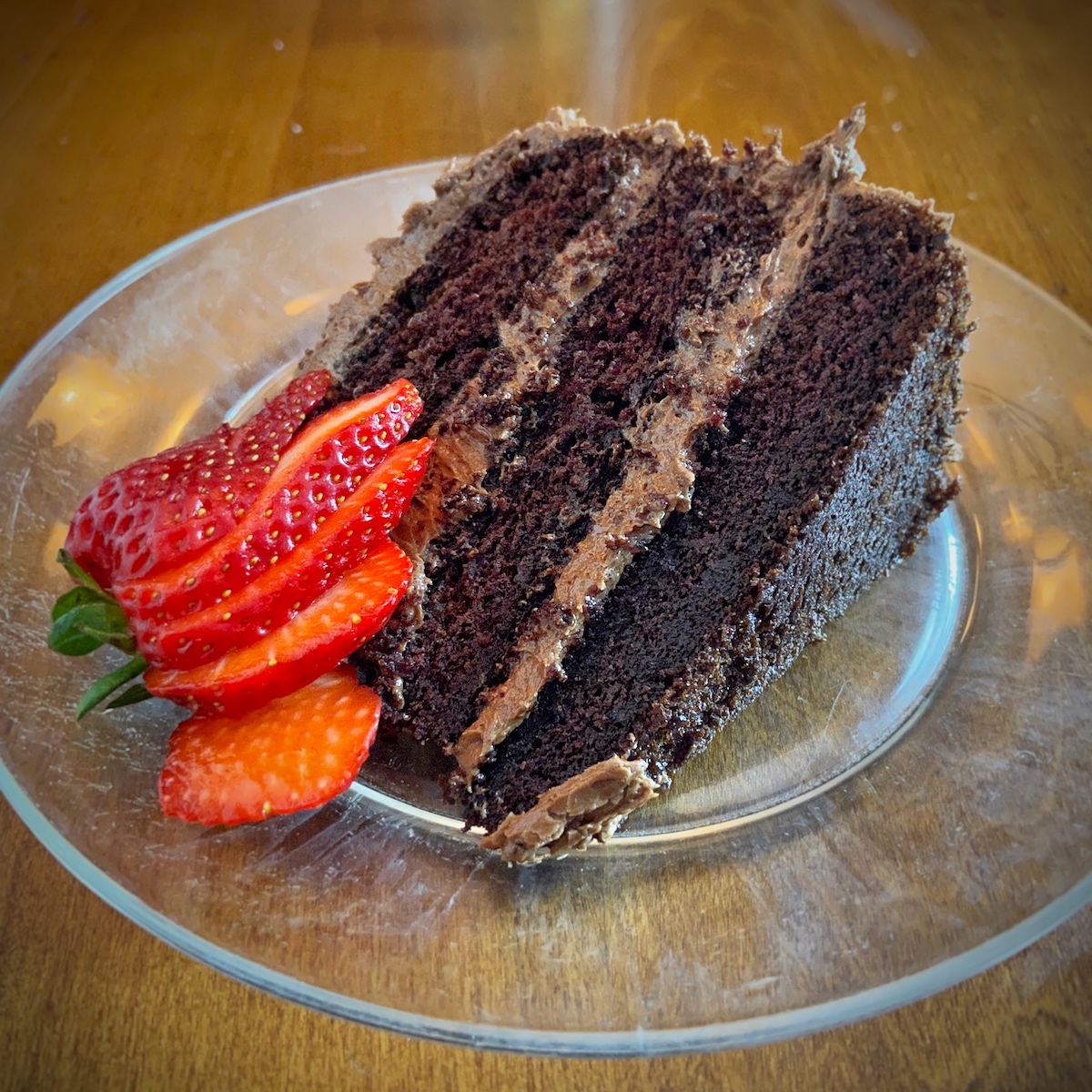 And Then A Storm Blows In

Finally, we creamed one cup of softened unsalted butter with 1-½ cups of sugar.  We were just about to start adding the 3 eggs and mayonnaise when seemingly out of nowhere a tornado-like storm blew into our neighborhood and knocked out the electricity.

I am not exaggerating when I say that one minute it was sunny and calm and within 5 minutes, trees and branches were felled all over our area and thousands of homes were without power for what turned out to be nearly 48 hours.

What incredible timing, is all I can say.  Had we gotten any further, we would have had to backtrack.

Instead, we put the butter-sugar mixture in the refrigerator along with the stout, covered the bowl housing the dry ingredients, and put it off to the side along with the three cake pans.  That was Wednesday.

Saturday morning when the electricity came back on, we picked up where we left off and finished the batter, first adding the eggs and mayo to the butter and then mixing a third of each of our concoctions together until all was combined.

Finally, we folded in about ½ cup of dark chocolate morsels.  We divided the batter as evenly as possible among the pans and baked them for about 40 minutes in a preheated 325 degree oven.

When the layers were done, we allowed them to cool in the pan for 15 minutes and then turned them out onto cooling racks.  We whipped up a chocolate buttercream frosting and assembled the cake on a cake pedestal my mother had given us one Christmas.  (I feel confident this was its first appearance out of the depths of some cupboard.)

While I was responsible for tenderly flipping each layer onto the plate as needed, Maddie took charge of applying the frosting.  Suffice it to say she is the artist among us; there was not a crumb in sight.

Even though RG didn’t get to blow out his birthday candles until three days after his actual birthday, we all agreed it was worth the wait.   So when you’re feeling ambitious, or just want a delicious chocolate cake on hand, AND there is no super storm on the horizon, give it a try.  You won’t be disappointed. 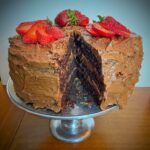