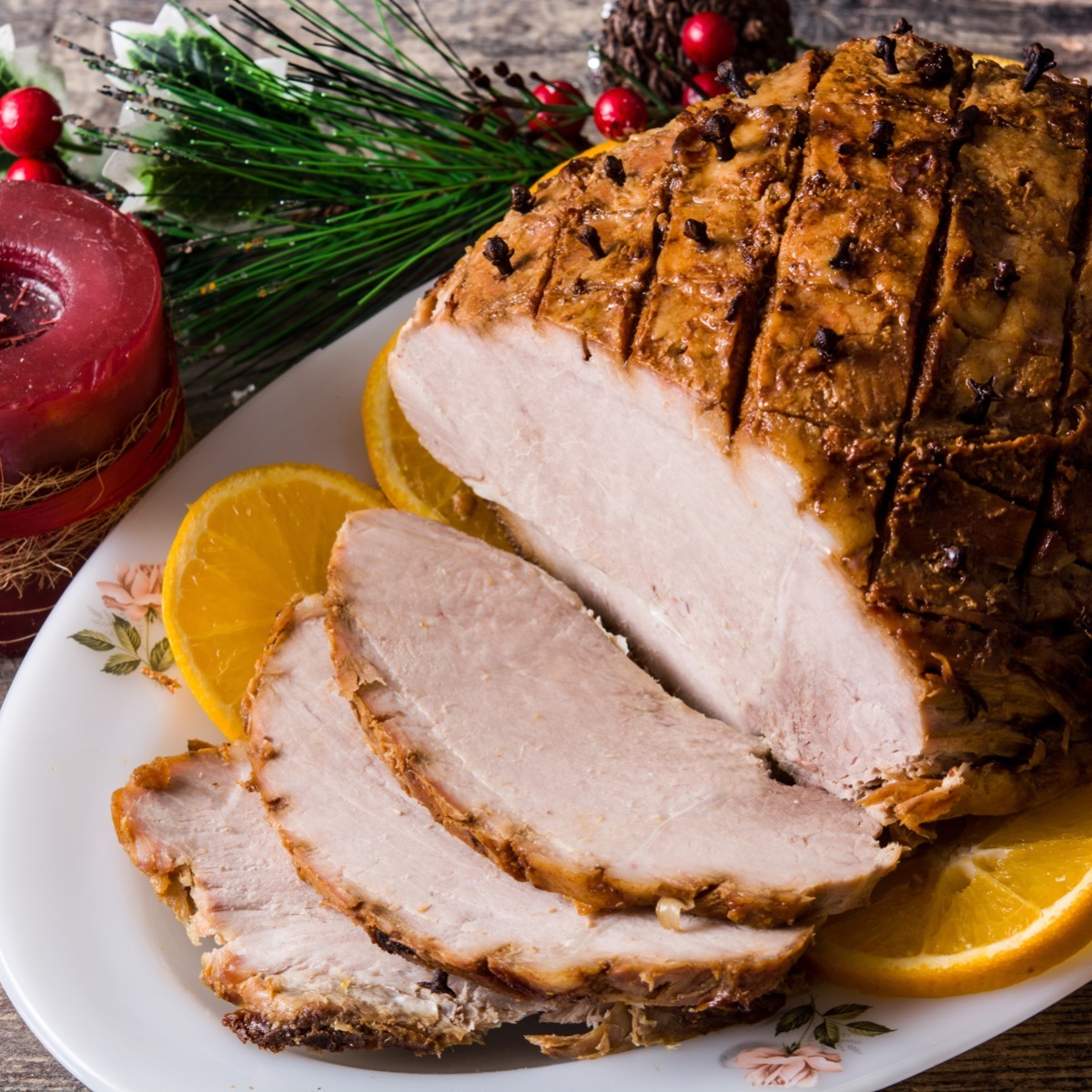 Memories of Christmas Ham During the Holidays

At Christmas time in our house, my mom usually prepared a roast leg of lamb or a Christmas goose like you see in the original The Christmas Carol movie. My mom, being from Denmark, said they enjoyed goose while she was growing up. But what about Christmas ham?

Whenever we went to my Uncle Emmett’s house for the holiday, my Aunt Girt would serve baked ham with all the trimming. She was a great cook and would prepare all my favorite side dishes and serve them buffet style. I’ll never forget eating on those TV trays that folded up.

So, why ham at Christmas? Serving ham arises from the pre-Christian Norse tradition of killing a boar and serving it to honor Freya, one of the Norse Gods. In AD times, St. Stephen, whose feast day is December 26th, is often depicted as serving a boar’s head as an offering. And, as often happens when diverse traditions converge around the feasting table: Christmas ham was born.

First of all, ham generally comes from the rear haunch of a pig or boar. It is one massive piece of meat and can be sold with or without the bone. Ham is a part of food traditions in many countries (think Italian prosciutto), but nowhere are the laws about ham more strict than in Spain. You’ll know why if you ever taste Spanish ham or jamon.

In the US, ham is regulated by the curing process and water content. Thin-sliced ham we see packaged as lunch meat can have upwards of 10% water added. So for Christmas, let’s concern ourselves with the “traditional” clove-studded, crosshatched beauty straight out of a Norman Rockwell painting.

Fresh ham—uncooked and uncured—is available for purchase, but this won’t taste like “ham.” Instead, it will taste like pork. Most folks want a ham-flavored ham for Christmas. Here, you have a couple of choices.

What is Country Ham?

Country ham is a dry-cured ham cured with salt and then dried. It can be smoked or unsmoked. For many, the gold standard of country ham is the Smithfield Ham. To be called a Smithfield Ham, the ham has to have been grown/produced in or around Smithfield, VA.

To prepare a country ham for serving at the holiday table, it must be scrubbed to remove all the mold and soaked for about 12 hours to reduce the salty taste. Don’t worry; the mold is a part of the natural aging process, but still, you’ll want to get it all off before serving.

You might need to simmer the ham in several water changes before baking to ensure it is not too salty. Even so, country ham is very salty meat. However, it is dry meat and dramatically benefits from the gravy. Red-eye gravy, made from pan drippings and coffee, is traditional.

If you want to serve country ham for the holidays, I recommend serving it in small portions. For your next holiday party, take a tip from Southerners and pass appetizers made from very small (1” diameter) cream or buttermilk biscuits, served with a small, thin slice of country ham.

What About Baked Ham

Your other choice for ham for the holidays is baked ham. A baked ham has been wet cured (soaked in brine or injected with brine) and smoked. The brine contains salt, sugar or honey, nitrates or nitrites, and other flavorings/spices. Baked hams can come either fully or partially cooked, so check the labeling on your ham.

Most of these Christmas hams are baked and served with some sort of glaze to impart extra flavor and sweetness to the outside of the ham. It is this salty-sweet combination that is so appealing about holiday ham. Glaze recipes abound in family traditions, cookbooks and magazines, and the Internet. Choose the glaze with the flavors you most enjoy.

Be sure to check out my Baked Ham Recipe.

Many baked hams come spiral sliced to make them easier to serve, especially if they are on the bone. The hams are placed on special machines that make continuous slices down to the bone. Slices are generally ⅛” to 3/16”. If your ham is sliced, don’t worry about the glaze—brush it on as if it were unsliced. Some glazes will work their way between the slices, adding extra flavor.

How To Bake a Christmas Ham

To heat a baked ham, preheat the oven to 325° F. Place the ham on a rack in a roasting pan in the bottom third of the oven.

A probe thermometer is an excellent way to tell when your ham is done without opening the oven every few minutes. Then, brush on the glaze and let it caramelize under the broiler for three to five minutes, observing to ensure it doesn’t burn.

No matter what kind of ham you choose, allow about ½ pound per person, give or take. Leftovers make great sandwiches and will freeze with no problem for up to two months, so go ahead and go big for the holidays. Oh, and don’t forget that you can make a lovely pea soup using the ham bone.