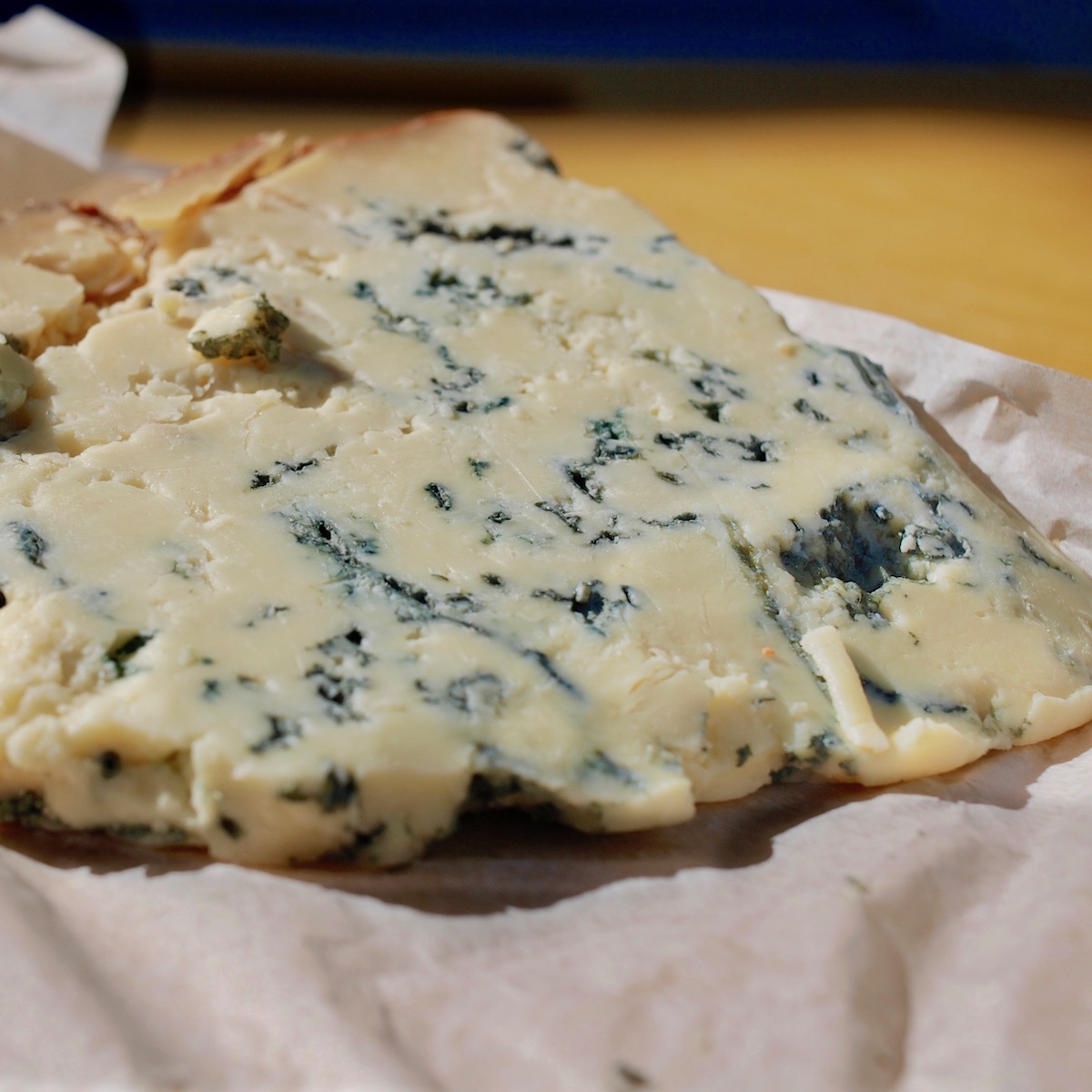 You know how much my wife and I love cheese. Most Saturday mornings we head to the Farmers Market to buy some ingredients for the weekend and pick up a tasty cheese with a loaf of Italian bread for our morning breakfast.

My new friend Bill, whom I affectionately call Bill the Stinky Cheese Guy, is my new cheese mentor who turns me on to new cheeses every week. This week I want to talk about Blue Stilton.

Blue Stilton, also called the King of English cheeses, is one of the most spectacular cheeses to come out of England and is the only English cheese that enjoys trademark protection. In fact, there are only five dairies located in three counties licensed to produce Blue Stilton. They include:

It is such a fantastic cheese that it even inspired a sonnet!

Sonnet to a Stilton Cheese

Stilton, thou shouldst be living at this hour
And so thou art. Nor losest grace thereby;
England has need of thee, and so have I -
She is a Fen. Far as the eye can scour,
League after grassy league from Lincoln tower
To Stilton in the fields, she is a Fen.
Yet this high cheese, by choice of fenland men,
Like a tall green volcano rose in power.
Plain living and long drinking are no more,
And pure religion reading "Household Words",
And sturdy manhood sitting still all day
Shrink, like this cheese that crumbles to its core;
While my digestion, like the House of Lords,
The heaviest burdens on herself doth lay.

What's the difference between Stilton cheese and blue cheese?

Blue cheeses are produced in many parts of the world using many different types of milk. For instance, Gorgonzola is a blue cheese made in Italy of sheeps' milk.  All blue cheeses rely on the mold Penicillium roqueforti for their characteristic bluish-gray veins and sharp flavor.

Much like Champagne is a sparkling wine made in the Champagne district of France, Stilton is a particular type of blue cheese only licensed to be made in three shires (counties) in England--Nottinghamshire, Derbyshire and Leicestershire.

The natural question, then, is why is it called Stilton? While the town of Stilton produced a type of cheese (possibly blue), in the mid-1700's innkeeper Cooper Thornhill of The Bell Inn in Stilton began "importing" this cheese from the surrounding counties.

Over time, Stilton production localized in Nottinghamshire, Derbyshire and Leicestershire, while Stilton was sold and exported primarily from the town of Stilton itself.

To read more about the history of Stilton, click here. 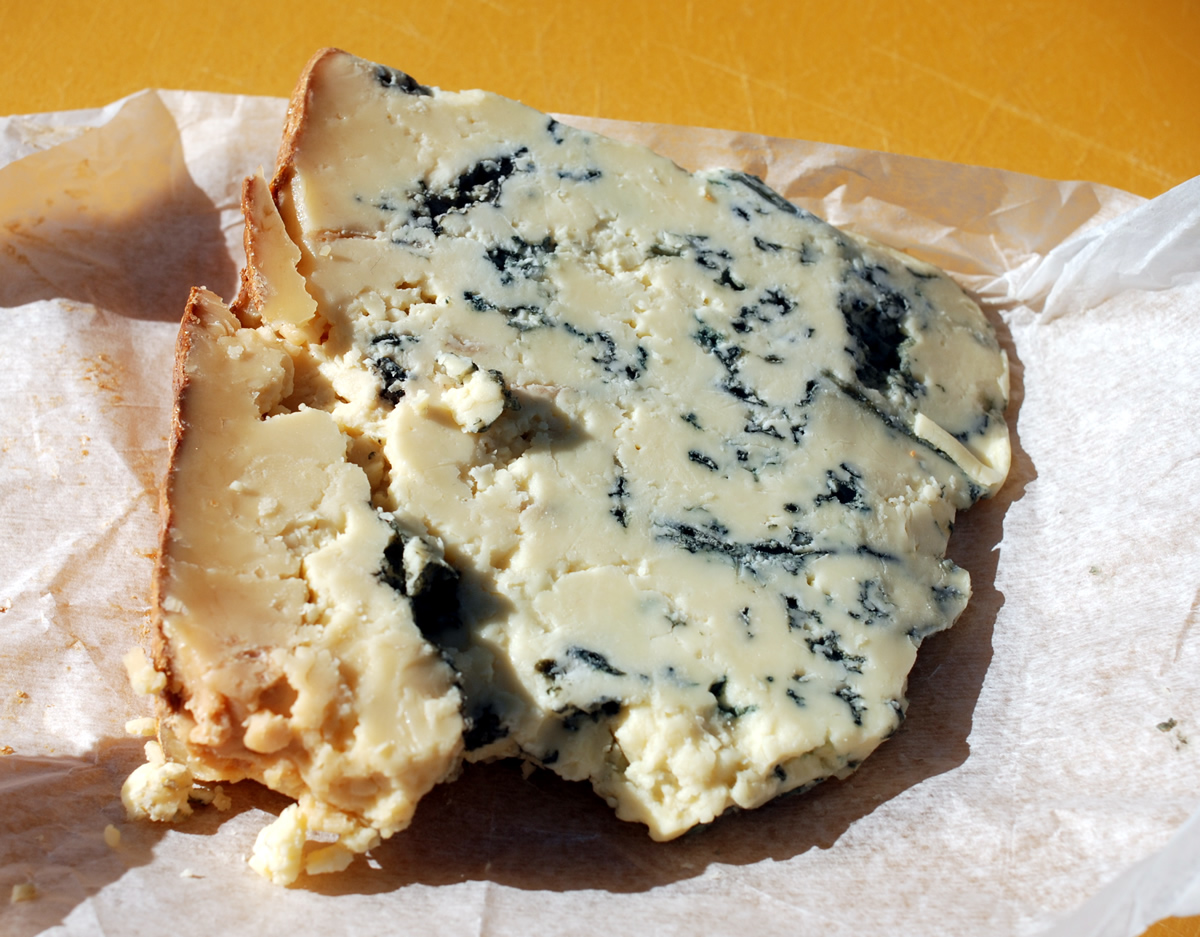 Of all of the most well-known varieties of blue cheese, Stilton has the lowest water content, the lowest salt content and the highest fat and protein content. This means that is the richest and creamiest of all the blue cheeses, which might be one of the reasons that I like it so much.

To make Stilton, cows' milk is first pasteurized and then cooled to 86°F (30°C).  It takes 17 gallons of milk to make one 17 lb  Stilton cheese. It is then mixed with rennet and the Penicillium roqueforti mold.

Once the curd forms, it is sliced both vertically and horizontally into long, thin pieces, kind of like julienne cuts.  The curds are milled, drained and salted by hand.

Once thoroughly mixed, the curds are placed in cheese molds, or hoops.  The curds continue to drain and the hoops are turned once a day to ensure even draining of the whey.

This is important because the cheese is then aged for four to six weeks before being pierced with long stainless steel needles.

The piercing step is repeated a week later, and then the cheese is allowed to ripen a further three weeks before being graded and passed for sale.

Colston Bassett Stilton has a brownish rind that can be dry and rough. The interior paste has an ivory color with it's trademarked greenish-blue veins. It definitely has a strong smell, some may call it a stinky cheese, but I call that a compliment. It also has a strong taste that I love but the kids wouldn't touch.

According to Steven Jenkins, one of the most knowledgeable cheesemongers in America who wrote Cheese Primer about Stilton, "The flavor of a great Stilton cheese is full, rich, and creamy, as complex as that of any other great blue.

It reveals layers and folds of the flavors of honey, leather, tobacco, and molasses."

Doesn't that just make you want to go out and buy some and taste for yourself?

At the Colston Bassett Dairy, one of only five dairies licensed to produce Stilton cheese, they also make a white Stilton.  This cheese is made exactly like blue Stilton, but it isn't pierced so the mold doesn't grow.

White Stilton is mild and creamy and is often mixed with fruits and honey to make seasonal dessert cheeses, usually around Christmastime.   Like its more well-known sibling, white Stilton also has a Protected Designation of Origin and can only be produced in the same six dairies licensed to produce blue Stilton.

Like most really excellent cheeses, Stilton should not be used in cooking. It pairs very nicely with crisp apples, and it is often served with a luscious port or sherry. As I mentioned above, I like to serve this cheese on a fresh French or Italian baguette for breakfast.

The other day I was making cheese quesadillas for my girls using a generic American cheese but decided to make one for myself with a little Stilton Blue. It was fantastic and took quesadillas to a whole other level for me.

I could also see cutting a thin slice and topping a grilled steak with it or using it in one of my demi based brown sauces. I know I said it shouldn't be used for cooking but if it's sitting in the refrigerator, why not?

There are a lot of great blue cheeses on the market and I hope to talk about many of them, but if you can find a Colston Bassett Stilton or one of the other name protected dairies version, give it a try and let me know what you think of it. Saying that, Stilton is not cheap.

I think I paid around $28 per pound for it so I  purchased about ⅓ of a pound but this is strong stuff so a little goes a long way.

And be sure to buy Stilton from reputable cheese shops that know how to handle cheese and sell a lot of it. You don't want to spend that kind of money expecting an incredible cheese only to be disappointed because the cheese purveyor didn't know what they were doing.

As I always suggest, ask for a taste. If you don't get it, buy your cheese somewhere else.