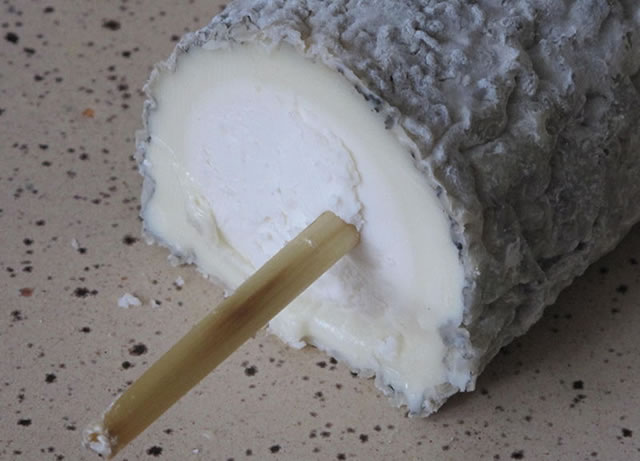 Hey, There's A Stick In The Middle Of My Cheese!

The first time I tried cutting into this cheese, I noticed a stick in the middle of it. It looked like a cheese Popsicle. It turned out to be a straw and not a stick and is used to help the cheese form during the aging process.

This log-shaped goat cheese is from an area in France called the Touraine in the Loire Valley. It is said to have been invented during Arab invasions in the Carolingian period (8th and 9th centuries), when goat breeding was first introduced in the Touraine region.

What's In a Name

With the aging comes more complex flavors that can be rather pronounced. The cheese has a walnut aroma and a slightly salty but nutty taste. Sainte Maure can sometimes be runny around the edges and will have a nutty but slightly tart flavor.

It's made from goats milk (45% fat) and is soft with a natural rind. The rind should be thin, smooth with a blue-gray molding.

Our Sainte-Maure was coated with a wood ash and tasted smooth and rich. I've been eating it plain but have also added it to my mixed greens salads.

It comes in 8 ounce logs and if you can't find any at your local gourmet market, try finding a good cheese shop or check out my on line sources below. I highly recommend them for all your hard to find cheeses.

Wines That Go With Sainte Maure