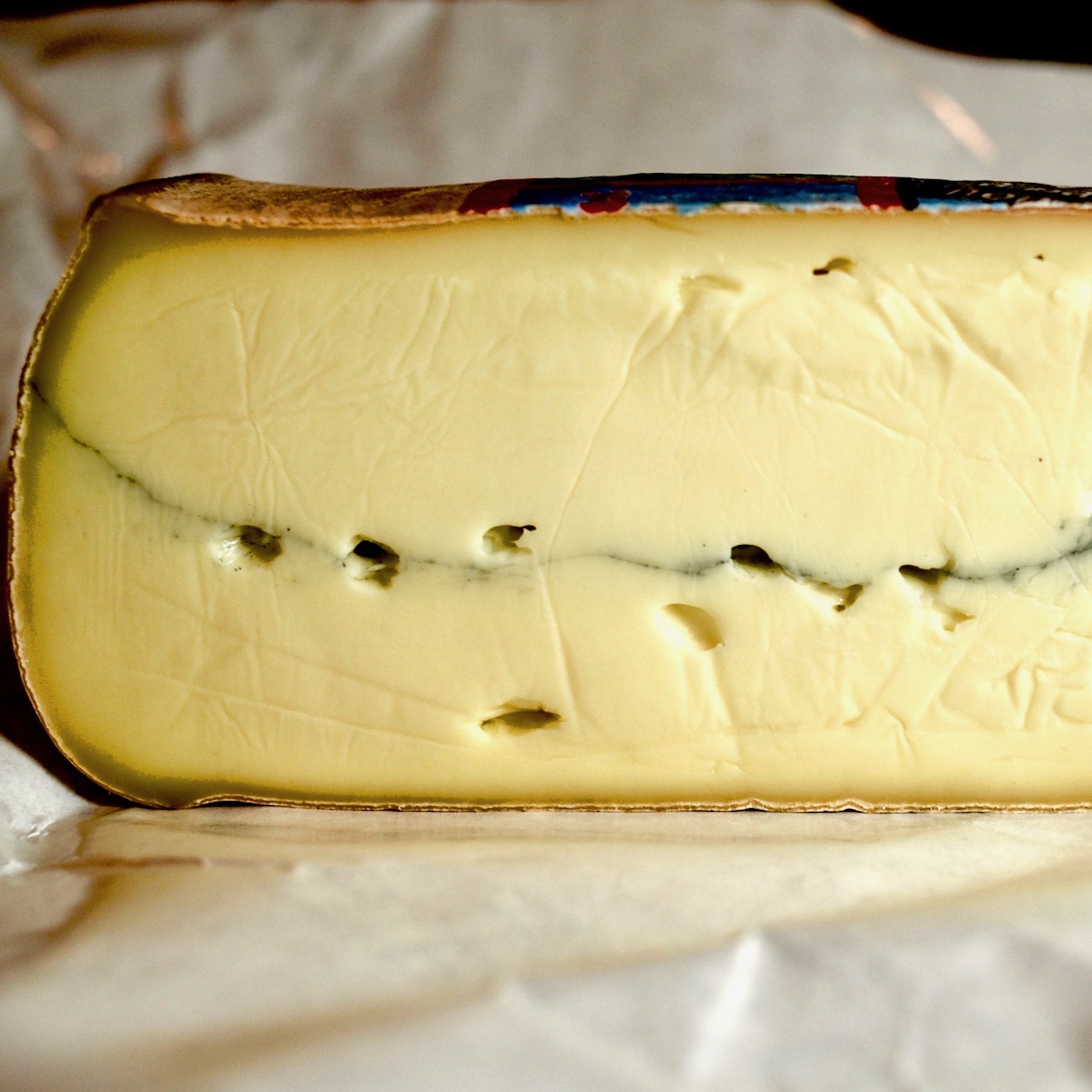 You are going to love this cheese!

I tasted Morbier for the first time at my friends gourmet market and loved it. Since then, I have purchased and served Morbier dozens of times.

I like it because of its flavor, texture and history. Make sure you buy it from a dependable source. It should be semi soft and not firm like I have found it at some supermarkets.

I recently paid $15 per pound as a specialty cheese shop so you may be able to find it a little cheaper. As always, ask the cheese person for a taste before purchasing any cheese. If they are reputable, they will not mind.

Named for a little farm town in France, this semisoft cow's cheese was originally made with left over cheese for personal consumption by the cheesemakers.

At the end of the day the cheesemaker would take leftover curd from making Gruyère de Comté and press it into a mold. To keep it from drying out and to keep the insects away, he would top it off with a little ash. In the morning he would add any additional afternoon curd on top of the ash and you had Morbier.

Today they make it from a single batch of milk and add a harmless vegetable product to give it the same appearance. It measures 15 - 18 inches in diameter, about 3 inches in height, weighs about 20 lbs., and has a minimum fat content of 45%.

A cows milk cheese that is aged 4 months. It has a washed rind and tastes like nuts and fruit. Morbier is a semi-soft cheese with a fresh hay aroma. You can serve it alone but it is great on sandwiches and melts great so you may want to try it in a grilled cheese sandwich.

With a bold & complex flavor, Morbier has a yellow-ivory interior and is wrapped by a creamy-brown crust. Morbier comes in 1 pound wheels which you may find at your local cheese store but if you can't find it, try one of these resources:

I received an email from a reader asking, I was doing some research on Morbier and came across your site. Specifically, the following:
"Today they make it from a single batch of milk "

I find this hard to believe. Every time I eat Morbier, I notice that one layer is smooth and mild and the other layer is more bitter. I am trying to find out which layer is which. Eric

I asked my friend Cheese Monster Jack what he thought about Eric's situation and here is what he said,

" I have never noticed a difference in flavors between layers. There is a slight difference in butterfat content between morning and evening milk. In Lombardy there is the saying " Tired cattle give good milk". Saying that, cream still rises to the top. So if the cheese is not flipped occasionally in it's storage yes, one side will taste richer than the other."

When I asked him about the ash used, he said,

"The ash was merely a good bug stopper and rind preventer. I carry a "type" of Morbier from Burgundy called Le Burgond and it is excellent."

Where Can You Buy Morbier Cheese?

You may be able to find this cheese at your local supermarket but try a local cheese shop or gourmet store.