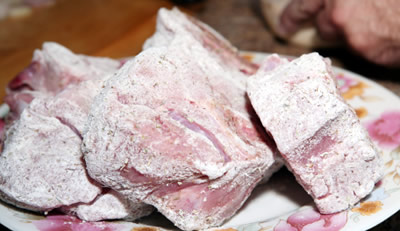 Flouring Meat Before Browning - What Does It Do?

Just the other day, I decided to braise some lamb shanks. Most recipes that I see call for the meat to be dredged in flour before browning, so I began to wonder why. Is it really necessary at all?

As with most cooking questions, there is a lot of conflicting information, both in cookbooks and out on the Internet. I am not sure why this is, but I imagine that most cookbook authors and chefs learned from people who just used different techniques.

Perhaps in one culinary tradition, flouring the meat before browning is standard operating procedure whereas in other traditions, it might be unheard of.

Most resources that I found agreed that flouring the meat before browning helps to thicken the eventual sauce. This stands to reason, as a very common method of thickening is through the use of a roux.

A roux is a mixture of equal parts flour and fat which is then cooked to achieve a certain color and complexity of flavor. When we flour meat and then brown it in oil, we are essentially making a roux"”the flour on the meat mixes with the fat in the pan and cooks, providing thickening power when additional liquid is added.

Aside from its thickening power, flouring meat, especially with seasoned flour, can provide both a flavorful crust and insulate the meat from the high heat in the pan. Whenever a recipe calls for flouring, it pays to look at the rest of the ingredient list to see if you can add any additional flavoring to the flour"”flavors that will complement the dish.

For example, if you are making a Cajun-inspired meal that calls for flouring meat, you might consider adding some cayenne pepper and some Cajun seasoning to the flour before dredging the meat in it. Since flour contains both proteins and sugar, the browning is the result of Maillard reactions, just like when you brown meat.

The difference is that, during cooking, the starches in the flour mix with meat juices and gelatinize, or swell up. The gelatinized starch provides a sticky coating that serves as an insulating layer between the meat and the hot pan.

This can be particularly useful in the pan searing of delicate foods, especially fish. The fish cooks nicely without drying out and ends up with a thin but crisp and flavorful coating.

I imagine that, when having to choose between browning floured meat and not browning the meat at all before cooking, the dish with the floured and browned meat would have a more complex flavor.

There has also been some discussion about using floured meat as a thickener. Many chefs consider browning in flour kind of a cheat and think that thickening and enriching should be done through reduction"”slowly simmering a sauce to reduce the water content, thereby thickening it and intensifying the flavor.

At the end of the day, the choice is yours: dredge your meat in flour before browning and then add liquid to provide some body and thickening, or reducing the sauce after cooking to produce a slightly thickened silky sauce.

In the case of thickening, there are a couple of other options available. While some professional chefs might consider it cheating, you can thicken a sauce by adding a slurry of flour (or corn starch, arrowroot, potato starch, etc) and cold water (or broth) to the sauce and then boiling for a few seconds.

The boiling cooks off the "raw starch" flavor and helps the starches to swell up, thickening your sauce.

Another option is to knead equal amounts of butter and flour together into a paste and add this to the sauce as it simmers. This is called a beurre manie and will enrich as well as thicken a sauce.

As far as I'm concerned, if my goal is to get a meal on the table on a weeknight, I will not feel bad about "cheating" with one of these thickening options.

Question For You - Do You Flour Your Meat, Chicken, Fish or Vegetables Before Browning & Why?