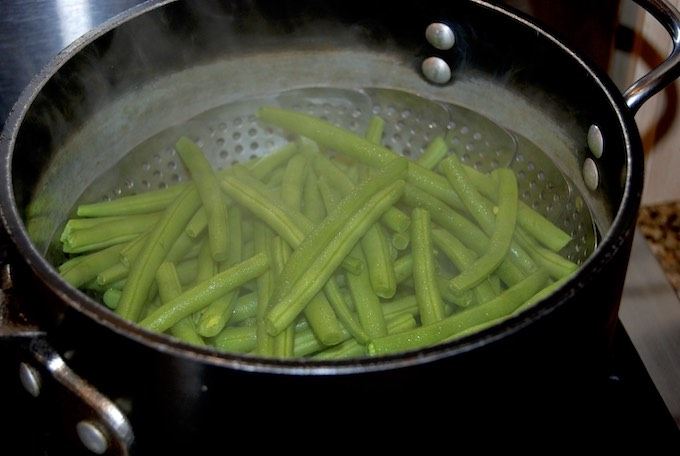 How NOT to Steam Foods

Steaming is arguably one of the healthiest ways to cook because no added fat is needed.  It is also a very gentle method as foods aren’t knocked around by boiling water or stirred over high heat.

Rather, the steam gently penetrates and cooks all foods at around 212ºF, the boiling point of water.  Also, water soluble nutrients are less likely to leach out of foods during steaming than in other moist heat cooking methods, such as poaching or boiling. Unless you are serving the cooking liquid as part of the dish, as in a stew, many nutrients will be poured down the drain along with the liquid.

Almost all types of foods can be steamed including both tender and tough vegetables, dumplings, breads, cakes, meats, fish and grains.  While Americans probably think of steaming vegetables and might find it odd to steam other types of foods, people in Asian cultures have a long tradition of steaming dumplings, meats, fish and even buns.  As well, the traditional English plum pudding is a steamed cake.

Steaming can be achieved by suspending the food to be cooked above boiling liquid, making sure that the cooking vessel has a tight lid to trap the steam.  Food can also be steamed directly in cooking liquid.

While this may seem like boiling or poaching, the difference is that the steamed food - generally grains such as rice or quinoa - will absorb all the liquid, again resulting in minimal loss of nutritional value.

Another big advantage of steaming is a reduced risk of overcooking, since the cooking temperature is low.  Steamed foods are more likely to come out consistently moist than with harsher, direct heat cooking methods.

Since steamed foods cook at relatively low temperatures, they will not brown.  While you might miss the depth of flavor that the Maillard reactions bring to foods, you will notice the brightness and purity of the flavor of the food itself, which can sometimes be masked by browning.

Steaming appears to be a straightforward process, but as with many cooking methods, there are some pitfalls.  I have tried to cover all the mistakes possible, allowing you to avoid them and get perfect results every time.

You can read more about How To Steam Foods Properly here.

Most of this list of mistakes and fixes refer to vegetables, what most Americans think of when we think of steaming.

You might look in the back of your fridge and notice some broccoli that is a bit past its prime.  Not wanting to waste it, you steam it, hoping to salvage your produce.  When you serve it, your family is underwhelmed.

Steaming, perhaps more than any other cooking method, allows the flavor of the food itself to shine through.  Steaming intensifies and brightens flavors, so trying to steam an ingredient that is less than fresh is just going to enhance that quality.

Now that you are using the freshest ingredients possible, don’t ruin them by just giving them a rough chop before putting them in the steamer.  Cutting foods into uneven pieces, with some being larger and some being smaller, will result in uneven cooking, as it takes longer for heat to penetrate larger pieces of food.

I am not suggesting you get out your ruler and your scale to make sure that each piece of food has exactly the same mass and dimension, but it is very important to have your foods cut into similar sizes to ensure even cooking.  A classically trained chef might square off irregularly shaped pieces of food and then dice them precisely.

For myself, I just make sure that none of the pieces stand out as much larger than (or much smaller than) the other pieces.   This holds true for all foods, from dumplings to pieces of fish to chunks of butternut squash to cauliflower.  Consistent size leads to consistent results, so now is the time to practice your knife skills.

Mistake #3  Not Waiting for the Water to Boil

I understand that you want to get a weeknight dinner on the table in a hurry.  The temptation is to just put the ingredients in the steamer in a cold pan and then heat everything up together.  This method just equals more time in the kitchen and, quite possibly, overcooked food.

The Fix—Patience:  Wait for the Boil

If you are steaming food suspended over a liquid, as with a steamer basket or a bamboo steamer, very little liquid is needed.  After all, you are after the steam, not the liquid, and steam can take up 1600 times the volume of water.

Add to that a lidded cooking vessel which effectively traps the steam, and therefore the liquid, and it becomes obvious that you don’t need much liquid to start with.  A couple of ounces is quite probably sufficient to effectively steam most foods, and such a small volume will take very little time to come to a boil anyway.

If you start with your foods in the cold pan, they will begin to cook as the water heats, even before it comes to a boil.  You will end up with foods that can be mushy and overcooked on the surface, even if the interior of the food is cooked to perfection.

Now you have your foods cut all in uniform pieces, but you will still encounter problems if you pile too much food into the steamer - you will end up with some pieces that are under - or over-cooked, just as if you hadn’t taken the time to cut the food uniformly in the first place!  What gives?

The Fix—Give the Food Some Space

When you boil foods, even if all the pieces aren’t necessarily the same size, the water is turbulent because of the rapid bubbling, and the heat is able to penetrate all the pieces of food.

Steaming is much less dense than water  - consider that the same mass of steam takes up 1600 times more space than an equal mass of water - and cooks very gently.  There are no bubbles to agitate the food and stir it around.

You’re not stirring the food with a spoon, either, because the cooking pot needs to stay lidded.  The steam gently cooks the foods it can “get to.”

If you have piled a bunch of food into your steamer basket, the steam is not going to move the pieces around to get down to the ones in the center of the pile, so make sure your food is not crowded.

Place the food in a shallow layer in the steamer, not in a pile.  If you have a bamboo steamer with stack-able inserts, split up large amounts of food in two or even three baskets so the steam is able to penetrate it all the food evenly.