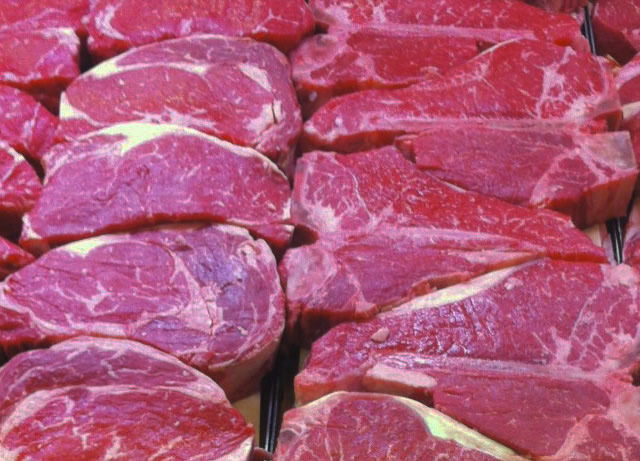 How Little I Know About Côte de Bœuf

Yesterday, I read this interesting article in the New York Times by Elaine Sciolino about how France is starting to import beef from other countries including the United States because the French cows are bred to be “big, powerful, muscular races of cows in France that were bred for work……Alas, they produce beef with very little taste”

It’s a very interesting article and I highly recommend you read it if you like to stay current in beef news but in the article Elaine describes several cuts of beef that I’m not that familiar with and wanted to share with you.

I’m guessing my ignorance has something to do with the French translations of these terms but I thought it would be interesting to find out more about them. For example, the article starts out talking about “bavette with shallots, faux filet with frites, rumsteck with Roquefort sauce.” Huh?

Let’s start with bavette. After doing just a little research, there is no simple answer because there are two different cuts in France called “bavette”. One is Bavette d’aloyau “of the sirloin” also called a skirt steak and the other is Bavette de flanchet or what we call flank steak. Both these cuts are sometimes sold as hanger steak but according to the article I read, that would be wrong.

Just to confuse matter a bit more, I read another article in the San Francisco Chronicle describing this bavette as “flap” meat. It also added, “Because bavette means bib in French, sometimes the word is used as a catch-all phrase for thin steak.”

If you look at Bruce Aidells new book, The Great Meat Cookbook, he describes flap meat (bavette) as coming from the bottom sirloin or the “underside of the hip”.  It looks like the above mentioned flank steak but is larger. Ok, now I’m starting to get confused even more.

Let’s look at faux filet with frites. I know that frites are French fries but what is faux filet? Turns out, it is the French name for sirloin steak also called “aloyau” in French. A sirloin steak is cut from the back of the cow just after the short loin and before the round but you have top sirloin and bottom sirloin.

Top sirloin comes from above the hip and the steaks from this section of the cow have many different names including top sirloin cap steak, culotte steak, shell sirloin steak, sirloin butt, chateaubriand, London broil and baseball steak.

Bottom sirloin comes from the underside of the hip and depending on what part of the bottom sirloin it comes from can be called tri-tip steak, triangle steak, California steak, Newport steak boomerang steak, flap meat steak (see above), ball tip steak or bottom sirloin butt steak.

I’m sure that made it clearer. I’m guessing Faux Filet comes from the top sirloin.

Let’s start with Roquefort sauce which is made with Roquefort or some other blue cheese, white wine, and shallots. Simple enough.  From what I can find on the Internet, rumsteck is translated into rump steak or what we call the round or the section of beef from the back of the cow. Interestedly enough, the Brits and Australians call this primal cut the rump.

Americans divide the round into three cuts including the eye of round, bottom round and the top round. Again, I’m not sure which of these three the rumsteck comes from and if anyone knows, please let me know in the comments section.

The English translation is Rib of Beef and it is basically a single bone-in rib-eye steak from the center of the standing rib roast. A single thick cut rib can weigh up to 2 pounds and easily feed two or three hungry people. In the US, this steak is sometimes referred to as a Cowboy steak.

Because this steak is so thick, the best way to cook it is using a two-step process. Start by searing it on a hot pan or grill and then finish it on the cool side of the grill or in your oven until it reaches the desired temperature of 130-135ºF for medium-rare.

So now that you have a little background on some French terms for various beef cuts, enjoy Ms. Sciolio’s interesting and informative article called Your Imported Beef Is Served.