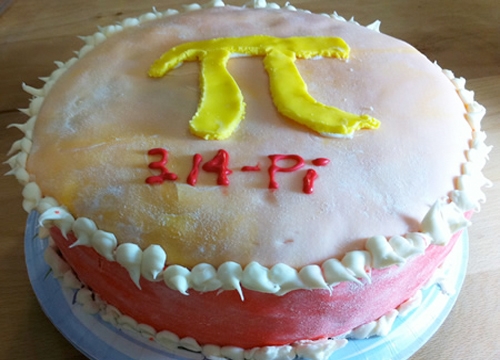 Today I learned from my 13-year-old daughter that it is Pi  Day celebrated every March 14 - 3/14 - 3.14 - commemorating the mathematical constant pi = 3.14159265+. Pi represents the relationship between a circle's diameter (its width) and its circumference (the distance around the circle).

I was not aware that there was such a special day but I hear it is very popular among mathematicians and kids in middle school. In fact it was created by Larry Shaw, a physicist, at the San Francisco Exploratorium back in 1989. Can you imagine the celebration in 2015 when the date will be 3.14.15? It's going to be crazy fun.

I watched my daughter Nell and her friend Carly make this cake using fondant to finish it off. I asked her why a cake and not a pie and she explained one of the boys was already making a pie for the class and she was asked to make a cake.  Good to see the boys are baking in middle school.

Some interesting facts about Pi Day from Wikipedia

If you are inclined to prepare a pie today, here are some of my favorite pie recipes on The Reluctant Gourmet: