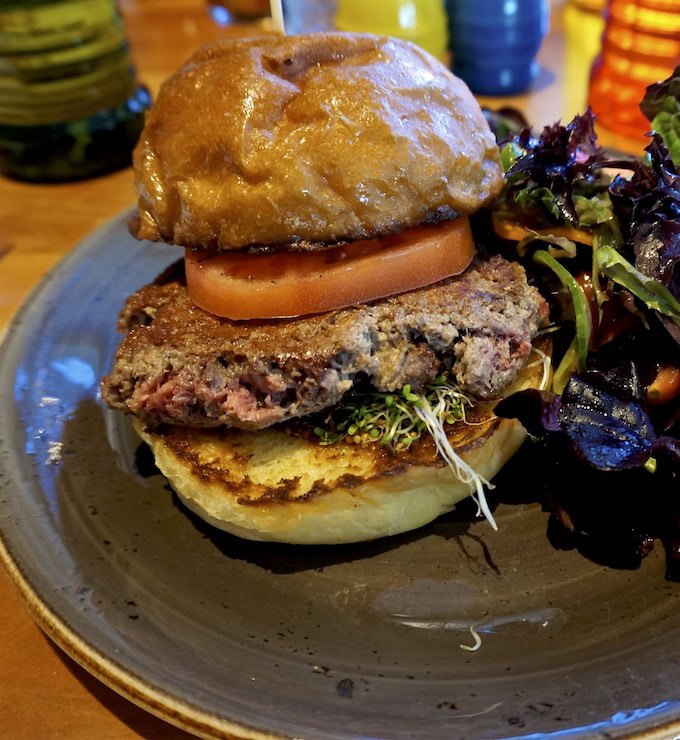 What Is An Impossible Burger and How Do I Find One Near Me?

Today my family and I ventured to Swarthmore, Pennsylvania to have lunch at a restaurant called the Broad Table Tavern that offered the “impossible burger”.  When my mom first introduced the idea, I thought it was going to be a triple decker cheeseburger with tons of absurd toppings, so I preemptively ate a small breakfast and worked out before this “challenge”.

However, after looking at the menu I realized the burger was not “impossible” in the sense to eat, but more “impossible” to fully understand.  It was a completely vegan burger but looked, smelled, and tasted like a normal meaty burger.

Once it came out, I realized I had seen something like this on one of those Facebook videos that you watch, make a mental note to eat, and keep scrolling.  And here it was! In a small local restaurant near Swarthmore College.

It seems like a meal that tastes like a hamburger but made with vegetables would be wildly popular, so why have I only seen it offered at one location ever?  Our waiter explained that until a few months ago, restaurants needed a special permit to serve this meal, and this was the only restaurant in Pennsylvania that had the permit.

I continued on with my own research of this phenomenon and like Plankton, tried to find the secret recipe to this Krabby Patty.  The official Impossible Burger website describes that the burger is made from wheat, coconut oil, and potatoes, but this secret ingredient is heme.

Heme is defined as “an iron-containing compound of the porphyrin class that forms the nonprotein part of hemoglobin and some other biological molecules.”  Basically, it gives meat those delicious characteristics that make it a juicy piece of meat.

This company has discovered how to make heme from plants and through a fermentation process, use it in the hamburgers.  Unlike Mr. Krabs, the ingredients are not kept secret and a full list can be found on the website, as well as how certain ingredients like heme work.

While now there are about twenty-six restaurants that serve the impossible burger in Pennsylvania, why wouldn’t everyone just recreate the ingredients to form a recipe?  While I do not know for sure, I think the process of making the burger is difficult and cannot be done without some lessons.

The waiter was explaining that when they got the license, people had to come to the restaurant and teach them how to make it.  That also explains why it is not available to the public in retail.  Once it is, as dramatic as it sounds, it could make a huge difference in the future of this planet.

Cows use up a ton of earth’s natural resources and during the process emits gasses that contribute to pollution.  To make the impossible burger, these resources are used a fraction as much, yet the result is pretty much the same.  Red meat is bad for the environment as well as bad for people’s health.

The impossible burger is also way healthier than a normal burger as it is completely plant based, which is overwhelmingly better for the heart.  And, it is less caloric and fatty.  Who doesn’t want that?

It seems like the perfect solution, that is, if you live near one of the restaurants that serves it and can afford to spend fifteen dollars on a burger.  Until it can be offered at a lesser price in grocery stores and maybe even in McDonalds, I’m afraid it won’t be able to overtake the normal hamburger and save the world.