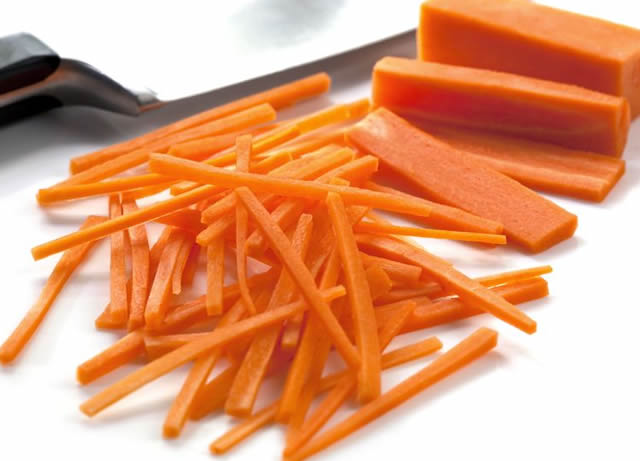 Knife skills are arguably one of the pivotal skills that separate the professional chef from the home cook.  Many home cooks are intimidated by the flourish with which knives are wielded on Top Chef and Iron Chef.  We are afraid that we might hurt ourselves if we try to do what those TV chefs do.

Know this:  the only reason that those pros on TV can handle a knife the way they do is practice.  Before every one of those guys or girls was a professional chef, they were a novice just like us.  Don’t be intimidated.  Slow down and learn the skills.  Speed will—or won’t—come later.  Speed is not the point, though.  Precision is the point.

Why are knife skills so important?

Good knife skills can help to:

There are two basic categories of knife cuts:  cuts in which you want a uniform size and shape, and cuts where it doesn’t matter so much.

Doesn't Matter So Much

Let’s look at the two that fall into the “it doesn’t matter so much” category.

The chop is a good cut to use when you are trying to get food into small bits but cooking time won’t be affected by the size and shape.  An example of when chopping is a good technique is in a stew, braise or any cooking technique that requires a long cooking time.   Chopping requires vertical and horizontal cuts, but they do not have to be precise.

Mincing is a very small cut that is useful for infusing a lot of flavor throughout a dish.  Often, recipes call for minced shallot, garlic or herbs.  To mince, you may have to make some vertical and horizontal cuts first, but then all you have to do is run your knife back and forth using a rocking motion over whatever you are mincing.

As you cut, the food you are mincing will get spread out.  Simply use the back of your knife to periodically gather it back into a pile and continue making the rocking cuts until the food is as small as you want it. 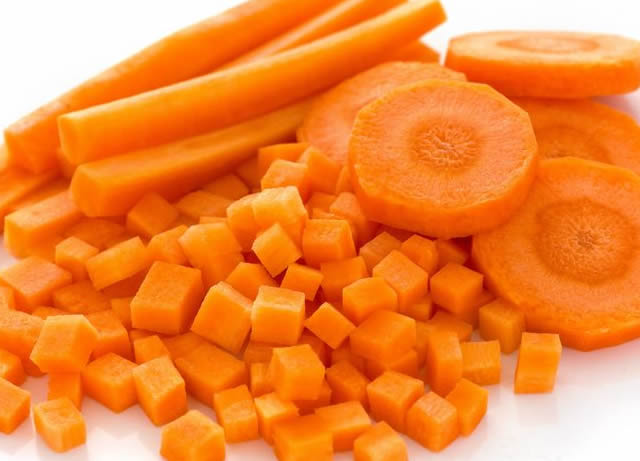 These other knife cuts are much more about precision.  These are cuts that are used to ensure even cooking and to enhance presentation.

The julienne cut is also called the “matchstick” cut.  The official measurements of a julienne cut food are ⅛” X ⅛” X 2.”  To make julienne cuts, square off the food that you will be cutting into 2” rectangles, reserving the scraps for stock or soup.

The batonnet cut is made exactly like the julienne cut, but the final dimensions are ¼” x ¼” x 2.”  To make a batonnet cut, square off your food, cut tiles that are ¼” thick.  Stack the tiles and make ¼” cuts through the stack.  You might recognize these as French fries!

There are four types of dice cuts, and they all start out the way you’d make a julienne or batonnet cut.  The only difference among the types of dice are the finished dimensions of the cubes that you cut.

Here’s how to make the dice cut.  Square off your food, reserving the scraps.  Cut tiles.  Stack tiles and cut again.  Now, stack your “sticks” and cut across them into uniform cubes.

Hold the food with one hand and make vertical cuts at an angle as you go up the food.  The thicker the food becomes (as carrots are thicker at one end than the other) the more extreme your angle.

The roll cut is a close cousin of the bias cut.  Roll cuts are made the same way as bias cuts, but after each cut, roll the food 180 degrees before making the next cut.  The roll cut provides the same benefits in regard to cooking time as the bias cut.

The chiffonade cut results in fine shreds or ribbons of food and is best used with leafy vegetables (kale, lettuce, spinach) and herbs (basil, mint, sage, etc)  Make sure the food you are going to cut is dry to prevent bruising.  If the leaves you will be cutting have a thick rib, such as chard or mustard greens, pull or cut the ribs out with your knife.

Stack leaves on top of each other, then roll them into a tight log or cigar shape.  Now, cut down short-wise through the cigar, spacing your cuts evenly every ⅛” or so.  The result will be fine shreds that are suitable for garnishing.

There are other esoteric knife cuts out there, but these cuts will enable you to cook almost any recipe you can think of with any technique you can think of.  Practice, and remember “substance over style.”  Learn the techniques, perform them correctly and then add your own flair!