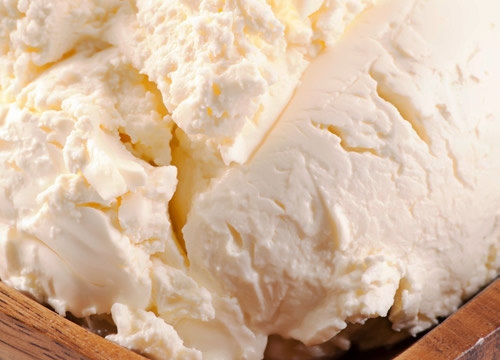 First of all, mascarpone is a fresh cow's milk cheese that is classified as triple cream.  It's very rich because of its 60% to 75% milk fat content. Mascarpone has a soft texture like cream cheese making it spreadable.

It is whitish to straw yellow in color and when fresh smells like milk and cream. It tastes sweet and slightly tart at the same time.

If you have heard of mascarpone, most likely it was associated with Tiramisu, an Italian dessert made with espresso that translates from "pick-me-up".  But mascarpone is used in lots of other recipes including sauces as well as mixing it with ingredients like mustard or anchovies and spreading on bread. It's also tasty all alone topped with fresh berries.

It is believed mascarpone originated in Italy just south and west of Milan in a area near Lodi back in the late 16th or early 17th century. There are lots of tales of how it was named but the one I like is that it came from the word "mascarpia", a local dialect for the word ricotta. Both cheeses are made the same way.

How is it made?

Mascarpone is made with heavy cream (although I have seen recipes using light cream) and tartaric acid. Tartaric acid is found in the sediment of fermented wine.  The cream is heated to 185 degrees Fahrenheit, tartaric acid is dissolved in water then added and the cream will immediately begin to thicken.

The curds are strained through fine cheesecloth and allowed to drain for 12 to 24 hours until the curds become Mascarpone.

Mascarpone is sold right after it is made and only has a one week shelf life, one reason it is so hard to find in your supermarkets.

Can you make it yourself?

Sure, but I'm not so sure you want to go to the effort unless you really like to make things from scratch. If you search Google for mascarpone recipes, you will find a few that you may want to try.

I also read that you can purchase a Mascarpone Kit from the New England Cheesemaking Supply Company that comes with recipe booklet and the cheesecloth, dairy thermometer and tartaric acid you'll need.

As I said in my reply to the questioner, there really is no substitute for fresh mascarpone as far as texture and taste but there are a few alternatives.

One can try substituting equal amounts of fresh cream cheese and sour cream mixed together or you can try combining ricotta cheese with heavy cream.  Again if you do a search on "mascarpone substitutes" you'll find a bunch of recipes.

Where can you find it?

Because of its short shelf life, you may not be able to find mascarpone in your local supermarket. If you have a specialty market around, there's a much better possibility you'll find it. Places like Trader Joe's and Whole Foods usually have it in stock.

I've also seen it in cheese shops and Italian markets but if you don't have any of these types of establishments near you, you can always order it on-line.

The most common mistake when talking about mascarpone is to pronounce it "marscapone" with the r before the s. I know, I've spelled it that way several times already in this blog before going back to fix it.

« Do You Own a Splatter Screen?
Veal Stew with Mushrooms Recipe »