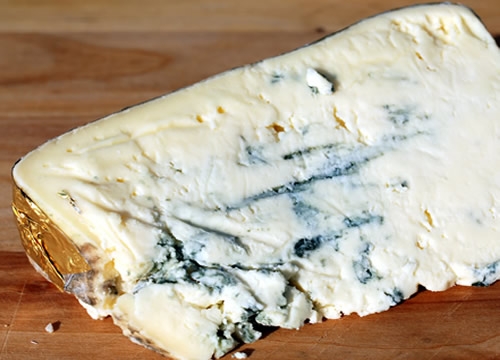 So it makes sense to talk about one of my new favorite blue cheeses, Cashel Blue, that comes from Beechmount in South Tipperary Ireland. What's really interesting about this cheese and makes it a perfect choice for St. Paddy's day is it is named after a medieval castle called The Rock of Cashel.

Legend has it St Patrick began the "conversion of the pagan Irish to Christianity by using a shamrock (a three-leaf white clover) to explain the Holy Trinity.

Who Makes This Cheese

Cashel Blue is the creation of the Grubb Family of Tipperary who first settled in County Tipperary back in the 17th Century but you will be surprised to know it is the first blue cheese ever made in Ireland and that was in 1984. This semi-soft blue cheese is sold in approximately 3-pound wheels and wrapped in gold foil.

As you can see in the background of their simple black and white label, there is a sketch of the Rock of Cashel.

There is quite a storied history about the Grubbs and I encourage you to read more about their history on the web site at The Grubb Family History. You can also read more about how Cashel Blue Came To Be in 1984 but let's talk a little about this magnificent blue cheese.

Cashel Blue has a wonderful creamy flavor that can be described as "milky/buttery." It is described as mild for a blue cheese without an overpowering flavor although you will taste the tangy flavor of all blue cheeses.

When young, 6 to 10 weeks of age, it has a white pasty color but that will change to a buttery yellow as it matures. You will also notice it is not as salty tasting as some of the other more popular blue cheeses.

The rind is all-natural with no wax coating and therefore 100 percent edible. This cheese is made from unhomogenized whole Holstein-Friesian cow's milk with over half the milk coming from the Grubb's own grass fed cows.

It uses the same fungus, Penicillium Roqueforti, as used in the popular cheeses Roquefort and Stilton and gives the cheese its blue veins and distinctive smell. Although the production has grown over the years because of it's popularity, Cashel Blue is still being made the same way it was back in 1984.

My wife and I love blue cheeses so most Saturday mornings at our local Farmer's Market we pick up some stinky washed rind cheese or a blue to go with our breakfast bagel or French bread. When I gave her a taste of this Cashel Blue she told me it could be her new all time favorite Blue at least until next week's pick.

The Grubb Family also produces Crozier Blue, the only blue cheese made in Ireland from sheep's milk. I hope my friends at Di Bruno Bros market bring some in so I can give it a try. I'm a huge fan of both sheep's milk cheeses and Blue Cheese so this is a must.

I found this short video of an interview with Sarah Furno, the daughter of  Jane Grubb, the creator of Cashel Blue. It shows you how the cheese is made, matured and then served with a steak. I think you will enjoy it.