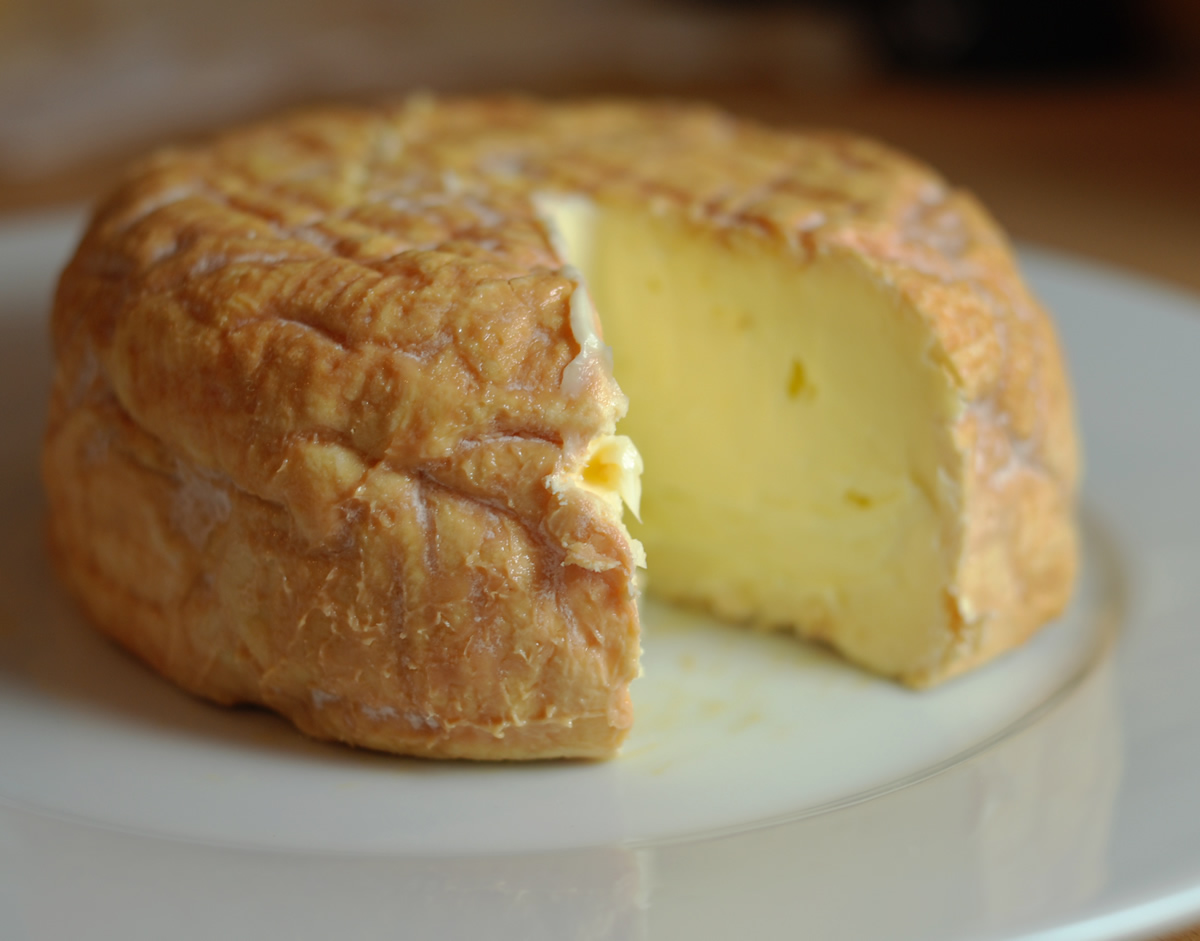 And Now, for the Stinky Cheese Lovers Among Us, Have I Got a Cheese For You!

This review comes with a warning:  If you are the kind of person who thinks that Gorgonzola smells bad or you draw the cheese line firmly at cheddar, this post is not for you.  If, however, you love stinky cheese; if Limburger is one of your favorite cheeses; if cheese gets better for you the more it ages, then you might want to get to know Red Hawk.

We have a new cheese purveyor at the farmers market I go to in Ardmore, PA. Di Bruno Bros. took over my friend Cheeseman Jacks booth as well as 4 or 5 more. I miss Jack and his rough demeanor and his incredible knowledge of cheese but Di Bruno Bros. brought with them a much bigger repertoire of cured meats and exotic gourmet items as well as a lot of great cheeses.

I asked the stinky cheese man (just kidding) for a washed rind cheese with lots of aroma like Epoisse and he came up with this Red Hawk and boy was he right. 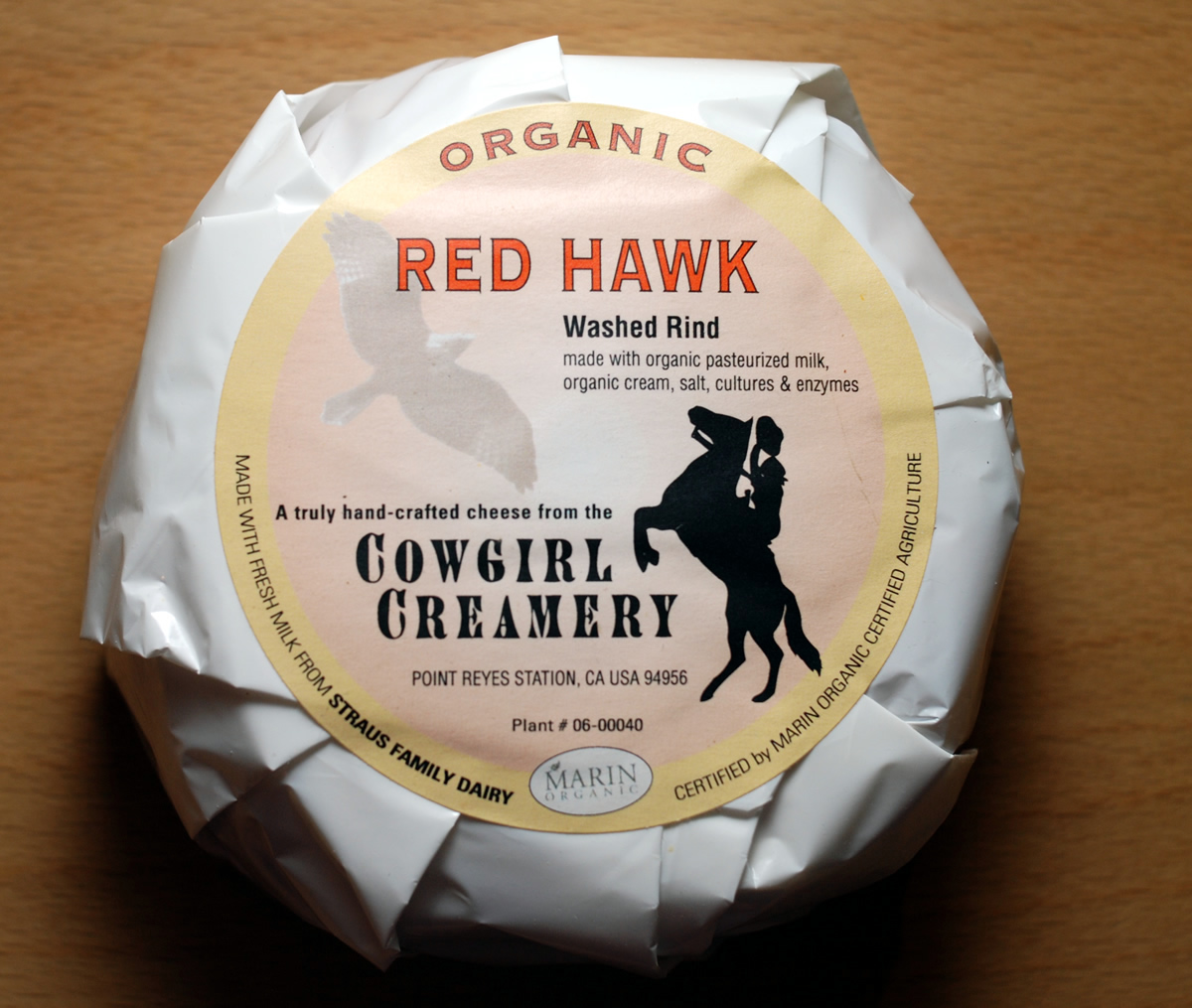 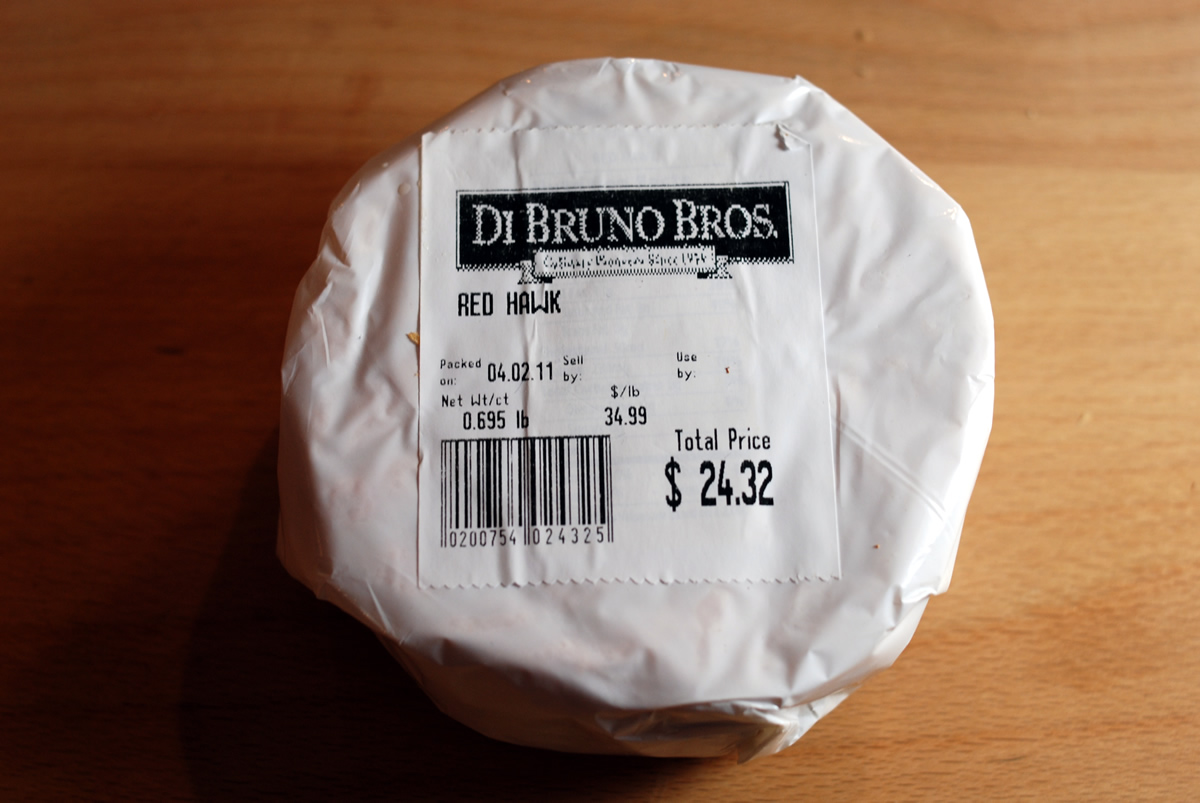 Red Hawk cheese is made by the chefs-turned-cheesemakers of Cowgirl Creamery, Sue Conley and Peggy Smith.  They first made it by mistake, when they were making a batch of their popular Mt. Tam cheese.  One of the chefs noticed that the rind wasn't developing correctly, so she tried washing it off.  She then set it aside and forgot about it.

Now For Some Detail

And when she remembered it again a few weeks later, it had developed a distinctive reddish-orange rind.  After they tasted it, they realized they were onto something and perfected the technique.  It's a triple cream, washed rind cheese (as is Limberger, if that gives you an idea of its pungency).

It is made with organic cow's milk which I like, especially as a father, because it is pesticide free. That is, if I could get my kids to eat it.  They both are adventurous eaters, but won't go near the stuff and leave the room if they smell it.

It reminds me of a comedy routine:

I learned that I am the bad father when I store my beloved stinky cheeses in the refrigerator.  One of my girls will open the fridge door to grab a snack, only to reel back in horror at the smell.  Even double-wrapped in plastic wrap, I will admit that there is a lingering...earthy...aroma about the refrigerator!

And if I leave it out to let it come to room temperature so I can enjoy some?  Forget it.  As the cheese tempers, the smell becomes more pronounced, and I am left alone in the house while the girls seek refuge outside.

Now, before I completely scare you away, hear me out.  Red Hawk might not be for the faint of heart, but if you like "stinky" cheeses--and this might be the stinkiest cheese I've ever eaten--there are a number of reasons why you should give it a try.

All the milk to make the cheese comes from Straus Family Dairy in Marin County, California.  How many single dairy source cheeses do you know?  Exactly.  I like that I know where they get their organic milk and how the cows are treated.  In this case, I think it really is true:  Happy cows do come from California.

The cheese comes in 10 oz rounds:  enough for you and nine of your closest friends to try it, but not so much that you can't figure out what to do with the leftovers.

Red Hawk is aged for four weeks before being wrapped up and sold, but the cheese will continue to age in your refrigerator, so if you have the inclination and your family will let you, taste a bit every few days to see how the flavor, texture and aroma changes over time.

As a triple-cream cheese, the cheesemaker adds extra cream to the milk in the mix. This adds to the butterfat which in turn adds to the creamy, silky, smooth mouthfeel.  This is a truly decadent cheese. 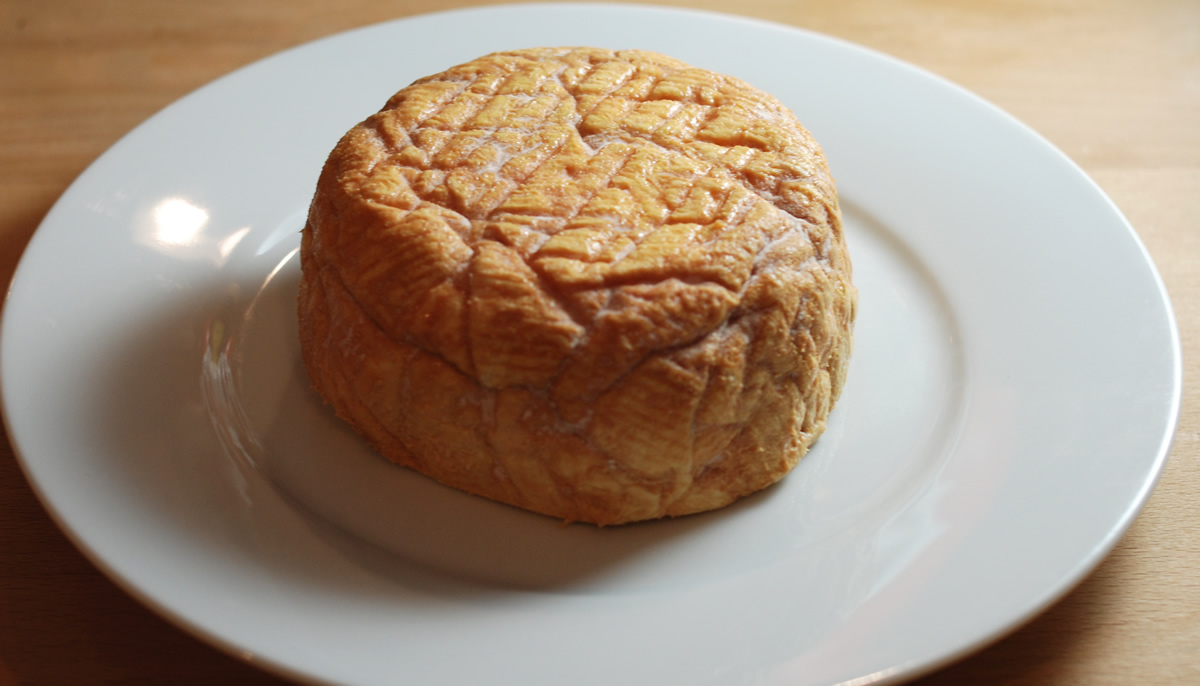 So, if you have stuck with me this far, let me tell you what to look for when you buy it, because I know you want to try it.

What is your favorite?

Are your kids afraid of it like mine are?

Have you ever tasted Red Hawk?

I'd love to hear from you, so feel free to leave a comment.

« Restaurant Management Resume
What Do You Want Me To Write About? »