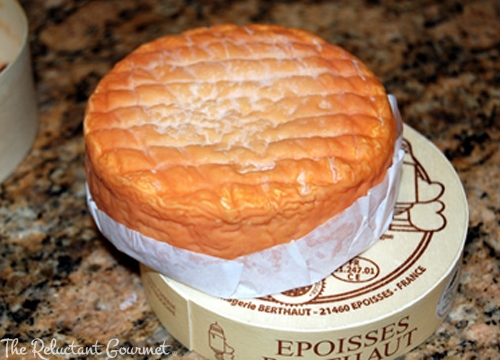 Most weekends I head out early to one of our local Farmer's Markets to pick up local produce and meats with my buddy Barbecue Bob. As I'm leaving the house my wife reminds me to pick a fresh baked French baguette and a stinky cheese for breakfast after our walk. It is becoming a ritual and a great way for me to try some new cheeses to tell you about.

What Is A Stinky Cheese?

There are lots of cheeses that you could call stinky but I'm going to focus on the "˜washed rind' stinky cheeses in this article. In the future I'll look at some other cheese varieties that have a strong aroma but taste great but for now let's look at some of the top stinky washed rind cheeses.

A "Stinky" cheese is an aromatic cheese where the rind has been washed with brine, marc (a fairly rough-tasting brandy made in the Burgundy region of France), wine, or beer.  The rind of one type of stinky cheese, Stinking Bishop, is actually washed with pear cider.

They are cured for no fewer than 60 days and are usually soft-ripened or semi-firm in texture category. The resulting aroma from washing and curing these cheeses can best be described as "Barnyard."  Other vivid adjectives that I've heard describing the smell of washed rind cheeses include stinky feet, mildewed laundry, warm animal and even unshowered for a week!

Needless to say, these cheeses must taste pretty darn good for anyone to want to overcome their smell and eat them. I have to say from my own experience; over time you start to acquire a fondness to the strong aroma. But why are these types of cheeses so stinky in the first place?

Washing a rind of a particular cheese creates an environment that inhibits mold growth. It also creates a bacteria friendly surface where the resulting aromas formulate. Now when I say bacteria, don't think these cheeses are going to make you sick.

Not all bacteria are pathogens.  Keep in mind that yogurt contains beneficial bacteria.  That's what "live and active cultures" means. One brand of yogurt even trumpets the name of the particular bacteria that they use to make their yogurt.

So, washing the rinds repeatedly inhibits mold growth and allows bacteria to thrive (molds kill bacteria - think of penicillin) and react with the cheese to form all sorts of complex, tasty flavors.  The cheese also develops a"¦distinctive"¦aroma.

Along with the flavors contributed by the bacteria, the solution used to wash the rind interacts with the cheese, sinks down into the cheese and becomes another part of the flavor profile.

Due to their pungent aromas, special care in wrapping and storing these cheeses should be considered to preserve family harmony and extend the life of the cheese. They will stink up your refrigerator, and unless your family is okay with the butter and ice cream smelling like feet, wrap them well.

What About Stinky Cheese Taste?

Now that we know why washed rind cheeses smell so funky, let's talk about how they taste.  The effects of the strong aromas are what create the big and complex flavors that result from washing a rind.

The strong aroma of the cheese often does not hint at the flavor.  I don't know about you, but I don't want to eat anything that actually tastes like a gym bag full of sweaty clothes.

Often, washed rind cheeses taste much milder than their smell would indicate, with savory hints of fruit, grass and nuts and with a texture ranging from firm and slightly grainy to soft and smooth to runny and silky.

The thing to remember with all stinky cheeses is what your mom always tried to tell you, "You can't judge a book by its cover!"  In this case, you can't judge a cheese by smell alone and what one person considers stinky may be perfume to someone else.

With some washed rind cheeses you can eat the rind but many of them you can not and there are those who don't like paying big bucks for these cheeses when you can't even eat the rinds. My friend Cheesemonger Jack says

A little but of an extreme response, but you get the picture.

Since I knew Jack was a fan, I asked him to tell me the stinkiest cheese he has ever sold and he said,

"The strongest smelling cheese I have ever smelled was "Vieux Lille." We were able to sell that cheese years ago but it is banned now. America is fearful of raw milk product. There are probably stronger smelling cheeses out there because who knows what evil lies in the hearts of men, but I have not had them."

I did a little research about Vieux Lille and found out that one of the nicknames for it is "Stinking Pickle."  I think that tells me all I need to know.  Then again, I never say never, and my mom wouldn't want me to judge a book by its cover.

What is the Raw Milk Designation

I was intrigued by the "raw milk" designation.  I found that by USDA regulations, cheeses made with raw milk must be aged a minimum of 60 days.

The milk is considered raw because it hasn't been brought up to the USDA requirement of 161 degrees F. When the milk reaches this temperature, many of the enzymes and bacteria present in the milk are killed.

This results in a "safer" product, but lovers of raw milk cheeses also say it ultimately results in cheeses of less complexity.  In much of Europe, the milk used for cheese making is not required to be pasteurized, and the resulting cheeses tend to be more flavorful and complex.

Everyone's palate is different, so he emphasized that this list is personal to him and is subjective.  Others might feel differently. 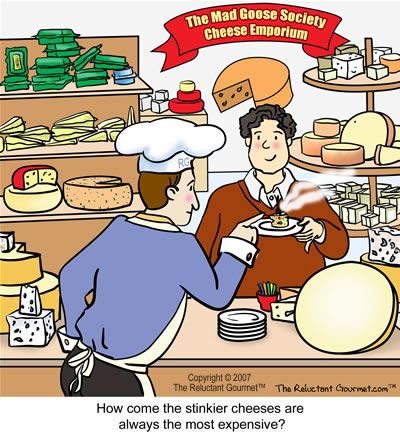 The following list is merely my most interesting and not my favorites. Everyone's nose and taste buds are legitimate and unique to their person and individual taste.

These are all words I ignore when these descriptive adjectives are used by a potential buyer. People should realize that what they might enjoy eating is not necessarily what any book or 'expert' may suggest.

I have tried the Ami du Chambertin, Epoisses, Pont L'Eveque and Livarot and will be adding them to the cheese page soon.  I hope to eat my way down the rest of the list, if they are all still available.