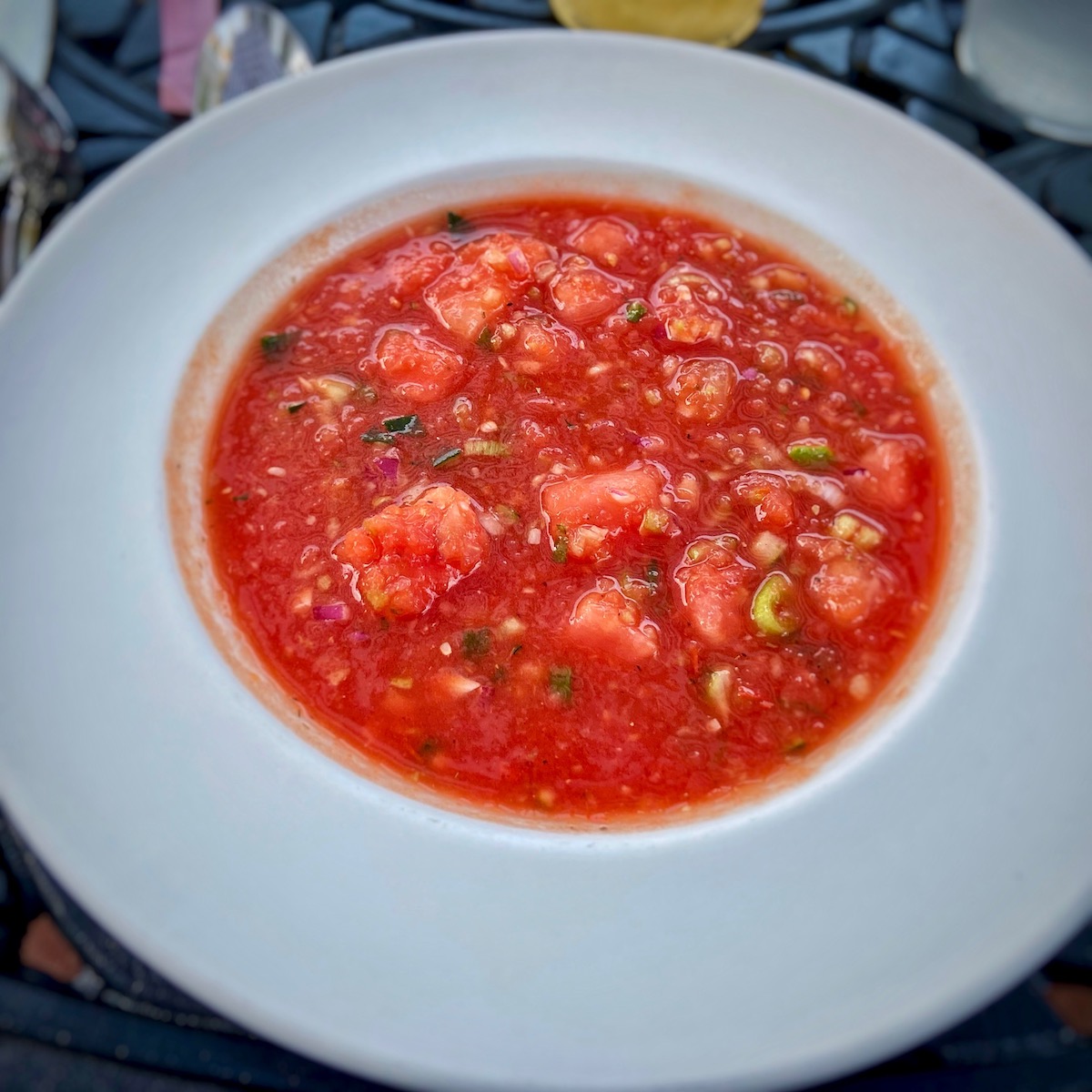 How to Make Watermelon Gazpacho at Home

We were having dinner at Radnor Valley Country Club a couple of weeks ago and they were serving this incredible watermelon gazpacho recipe as a starter to a prix fix meal. It was one of those perfect summer evenings.

We first went for a swim with our friends, changed and enjoyed dinner on their back patio overlooking the pool. The tables were spaced for social distancing and it was nice to be out for a meal for the first time since the pandemic. They even had live music from the Bourbon Tabernacle Band, a two person group originally from Kentucky.

Gazpacho is a cold soup that is thought to have originated in Andalusia, a region in southern Spain.  It has influences from both Greece and Rome.

Originally, it was made with stale bread that was combined with garlic and olive oil along with water or vinegar. These ingredients most likely came from the Roman soldiers who carried them around to make soups and stews.

It was then put into a mortar and pounded smooth. Afterwords various vegetables were added to the mixture.

The spices that are used for gazpacho will depend on only on what country you are in, but what region of that country you live in. I read at one source Christopher Columbus brought gazpacho with him on his travels from Spain and brought back tomatoes, peppers and cucumbers that made their way into the soup.

Today, you'll find it made with fruits and vegetables including watermelon. You might say gazpacho is a generic term for any cold soup with a vegetable or fruit base. I think of it as always having a tomato base.

I received this recipe from Chef Chris Lamond who is the new chef at Radnor Valley CC. He grew up and worked in Florida where this version of watermelon gazpacho is quite popular.

Chef Chris studied at the Sarasota County Technical school and was Chef de Cuisine at Plantation Golf and Country Club in Venice Florida.

So after our whole table enjoyed this starter dish, I knew I had to contact chef Chris for the recipe and he was kind enough to send it to me with a few comments below.

This watermelon gazpacho recipe came as something of a necessity in Florida where I grew up.  The seemingly endless amount of excruciatingly hot days gave birth to a wonderfully refreshing gazpacho with a subtle sweetness built right in.

The most crucial aspect to this soup is the ripeness of you produce. As fruits and vegetables ripen, acidity increases as well as sweetness. Your patience and care with them will be rewarded. 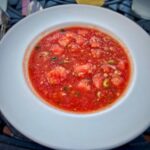 What Chef Chris didn't say in his directions but I suggest you do is to let this sit for at least a couple of hours before serving.  This is one of those dishes that get better as it sits and will be even better the next day.
« Habanero Sauce Recipe
Chicken Mushroom and Spinach Comfort Food Recipe »