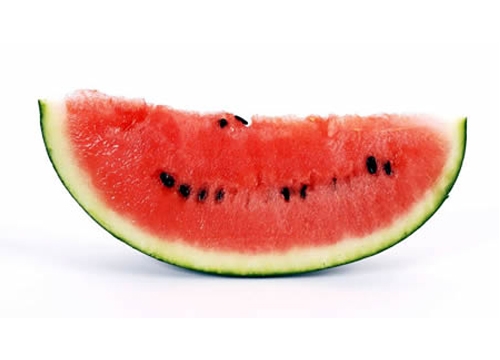 Tuesday was the first day of summer and when I think of summers past, watermelon comes to mind. As a kid, watermelon was a special treat on a hot summer evening after dinner.

Sitting on the front steps with some of my neighbors over to share a freshly cut melon and seeing how far we could spit the pits was a summer ritual.

Remember the old wives tale your mom or dad would tell you about watermelon pits? "Don't swallow any pits. If you do, a watermelon will grow inside you."

The watermelon, Citrullus lanatus, is a member of the cucurbitaceae family.  Unscientifically speaking it is an iconic summer fruit, a sweet, cool and refreshing treat that no barbeque or summer picnic should be without.

And while the watermelon is unequivocally considered an American summer staple, its roots are worlds and millennia away.

Watermelons are indigenous to Africa.  They were being cultivated by the ancient Egyptians more than 4,000 years ago.  Watermelon seeds were even found in the tomb of King Tut.

From the Dark Continent they spread to the Mediterranean region, then to India and finally to China in the 10th through 12th centuries.  China is now the world's largest watermelon producer.  European slave traders introduced them to the Americas in the 1600's, the same century that the watermelon received its current name.

Prior to that they were referred to as citrul (a word with French and Italian origins for citrus), or pasteque, a French-morphed Arab word for watermelon.

There are over 1200 varieties of watermelon ranging from one to 200 pounds.  While your average supermarket melon evinces a red colored flesh, there are varieties that sport an orange, white or yellow hue.

"Seedless" varieties are somewhat of a misnomer.  They still contain small, white, edible seeds.  Forty-four US states produce watermelon with Georgia, Florida, Texas, California and Arizona leading the way.  They are available May through September with the peak from June to August.

Despite being 92% water, watermelons do contain some nutrients.  They are a good source of Vitamins A and C, and also contain lycopene, a compound reputed to have anti-cancer properties.

There are a number of other nutrients in the rind, if you're so inclined.  In China the rind is pickled, stir-fried and stewed.  The Chinese are also fond of the seeds and roast them.

Watermelon juice can be made into wine.  In southern Russia it's utilized to make beer. 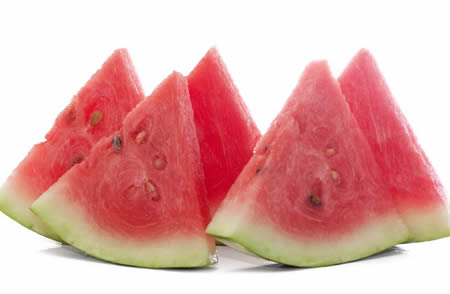 How to Choose a Ripe Watermelon

OK, onto the question that everyone has about picking watermelon:  How do you choose a ripe one?

First, select a specimen that is symmetrical, firm, and free of any bruises or soft spots.  Pick it up.  It should feel heavy for its size.

Is the one side slightly flat with a yellowish spot?  That's good.  That's where the watermelon rested on the ground ripening in the sun.

Then there's the thump test:  The idea that knocking on the watermelon can ascertain its ripeness.

I had my doubts about this snippet of common wisdom so I called the National Watermelon Association, a large multi-state organization of watermelon growers and spoke to one of their representatives.  Sure enough, they concurred.

The woman I spoke to said to thump the watermelon.  If a hollow, resonating sound ensued, you were knocking on a ripe one.

Uncut watermelons can be left at room temperature for up to two weeks but I'd recommend using them within a week.  Like any natural product, age does not bode well for taste.

Try to avoid purchasing pre-cut watermelon unless you plan to use it expediently.  Once cut, the watermelon must be refrigerated. 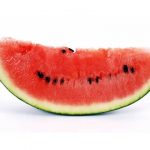 To make a mint chiffonade, stack a number of the mint leaves and then tightly roll them vertically like a cigar. Then make thin slices from end to end.
Print Recipe

This is an awesomely tasty and refreshing summer drink..
« Working in a Banquet Service
Steak Cheese and Onion Sandwich »