How Much Fillet Will A Whole Fish Yield?

A couple of weeks ago, my brother and sister-in-law took me out to dinner while my family was at a wedding in Wyoming. We decided to try a restaurant I've heard about, passed many times but never dined at since it opened.

Their specialty is seafood and they have a unique approach (at least to me) in how they offer and serve it to you. Essentially, you order a whole fish from Greece "and around the world", this fish is then charcoal grilled whole and then depending on the fish, the chef de-bones and serves or removes the fish fillets and serves.

So I did a search for "how much fillet will a one pound fish yield" and the first site that came up was Seafood and Fish information from Fishmonger Matt Hovey.  He has a post describing fish yields and calculates how much fillet is yielded by different types of fish and how much it costs you.

The most complete list of seafood yields that I've found so far is Chef's Resources. They really get into the details and look at "Head On & Gutted", "Head Off and gutted", "skin on", skin off", "bloodlines", "whole fish" and on and on. Probably more for professional chefs and restaurants, but I found it interesting.

A salmon with its head on but gutted yields 75% skin-on fillet.  I think this means if you purchase a whole salmon with the head on but gutted, the fillets cut off the body will be 75% of the total weight. This means a 10 pound sockeye salmon should yield about 7. 5 pounds of eatable fillet. That's a lot of fish yield and a great buy.

This doesn't sound to bad to me. That's about what I pay for fresh salmon fillets at the market. But let's compare this now to a fish that doesn't yield as much as salmon... say one of my favorites: fluke or flounder. Oh, by the way, salmon isn't one of the fish you can order by the pound at the restaurant we dined at.

Fluke and Flounder - Not So Good Yield

According to Matt's site, a whole flounder only yields 35% of skinless fillet.  Doing the math, a 4 whole pound flounder will yield only 1.4 pounds of flounder fillet (4 lbs x .35 = 1.4 pounds).  Not a very good ratio of eatable fillet to whole fish.

Right now flounder is really expensive because of the limits put on the fishermen last year. I've recently seen it at $25 per pound for flounder fillet. How much would the 4 pound flounder cost me? 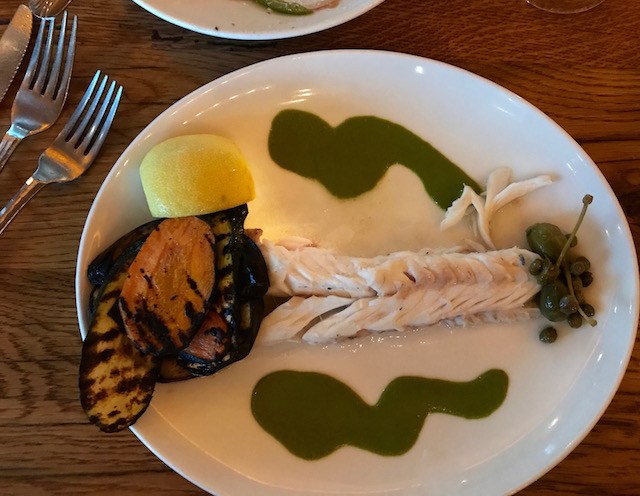 One of fish varieties offered at the restaurant is Dover sole.  According to CloveGarden, a 2 pound fish yields approximately 1 pound of skin-on-filet (50%) or just 10 ounces of skin-off fillet (about 30%). The reason for the lower yield is due to the amount of skin a Dover sole has and the weight of the skin. And don't forget, you don't usually get served skin on with this type of fish and if you did, you wouldn't eat the skin.

If the restaurant charges $49 per pound of whole fish, you are actually paying $49/.30 = $163 per pound of actual fish served at your table.  The restaurant suggests you purchase 2 pounds of whole fish at $49 x 2lbs = $98 for 2 people.  This will yield approximately 10 ounces of uncooked eatable fish or 5 ounces per person.  This doesn't seem like a lot of fish for a whole lot of money but you  are getting served some roasted vegetables, capers and lemon & olive sauce on the side.

What Is a Serving of Fish?

According to the Minnesota Department of Health website, a typical serving of fish is "based on the body weight of the person eating the fish."

This means if my wife and I are getting one serving each based on our weight, we should be looking for about 16.5 ounces in total of uncooked fillet but in fact, we are only getting approximately 10 ounces. For me to receive a serving of fish according to the Minnesota Department of Health, I alone would need to order a 2 pound Dover sole.

I know. I really shouldn't be complaining. First of all, my brother-in-law picked up the tab. Secondly, I'm out for dinner. I know food is going to be more expensive than cooking at home especially at a nice restaurant like the one where we enjoyed this meal.

We're being served by a great staff of waiters, the wine steward helped us pick out a great bottle of wine (don't get me started on wine markups) and the atmosphere was delightful. I'm still sticker shocked at the idea of paying the equivalent of $163 per pound of processed fish.  Is it just me?

What If I Purchase the Dover Sole at the Fish Market?

I looked up the price of fresh Dover Sole fillet at the Seattle Fish Company, one of the more reputable seafood markets in Seattle, and they are selling it online at $7.99 per pound. This seems way low to me and there's no way I'm going to find it at that price in my neighborhood.  Let's TRIPLE the price to $23.97 per pound for boneless, skin-off, ready to cook fillets.

It still costs $139 per pound less than at the restaurant. O.K., I'm going to complain a little and if I want Dover Sole, I'll make it myself.

Also remember, the actual yields any fish offers can vary depending on the overall size of the fish, the sex of the fish, what season you are in and the fishmonger's skills. Larger fish tend of offer better yields.

I was really interested in this fish because it is one of the more inexpensive fishes on the market. A tilapia round (whole fish not gutted) will yield 30 - 35% to skin-off fillets. At $10 per pound of boneless, skin-off fillet, tilapia is a real economical fish even at it's low yields.

Then there are fish that yield higher than 50% and I would consider a better value but not necessarily a better eating fish.

Another very popular fish,  Mahi that has been headed and gutted yields 67% to a skin-on fillet.

One of my favorite fish in the sea for eating but incredibly expensive and way over fished, a whole Chilean Sea Bass yields 68% to skin-off fillets. If you start with a headed and gutted Chilean sea bass, the yields go higher to an average 70% to skin-off fillets

A wonderfully high yielding fish, a head-off and gutted swordfish yields a whopping 78% to skin-on and blood line left in. This is how I usually see swordfish sold at the market, with the bloodline. That same swordfish yield drops to 64% when processed to skin-off and bloodline removed.