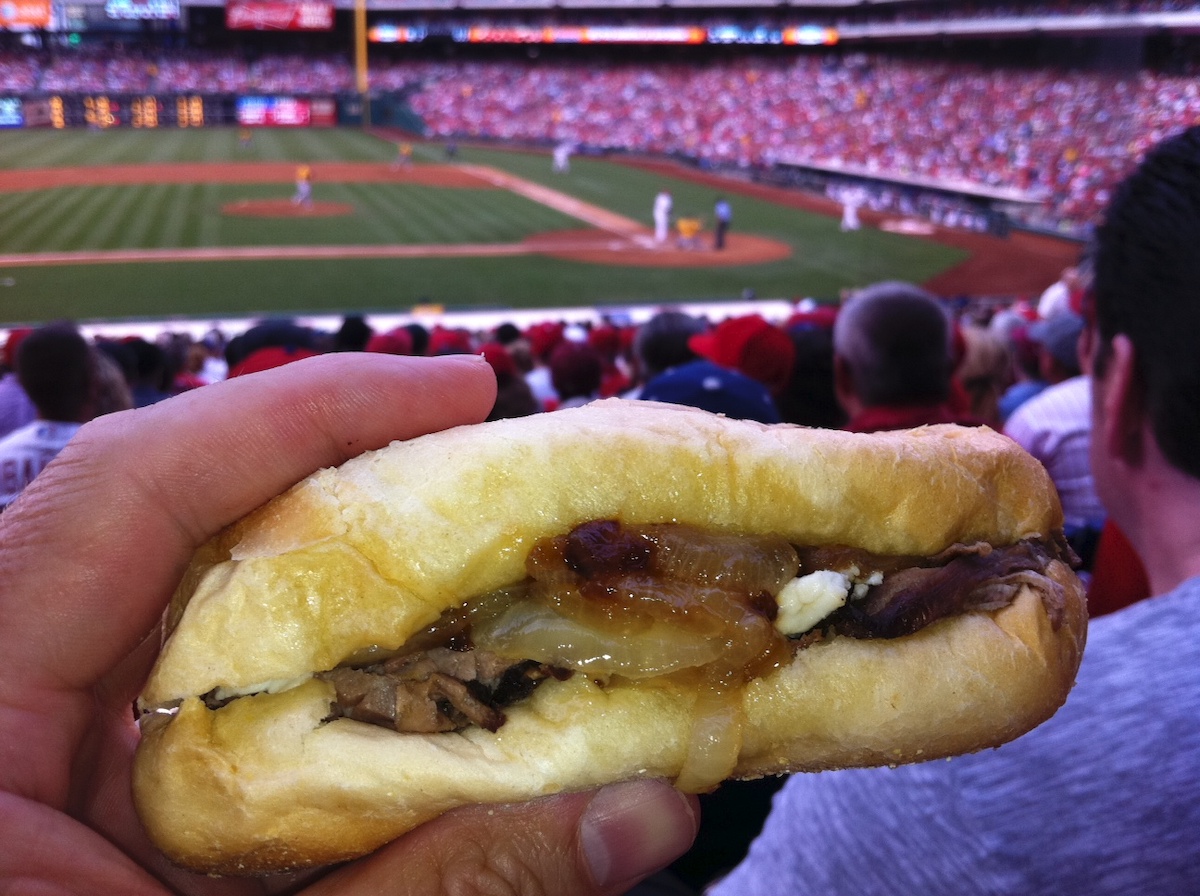 Take me out to the ball game,
Take me out with the crowd.
Buy me a steak and cheese sandwich snack,
I don't care if I never get back

This weekend I took my wife, daughter and her friend to watch the Phillies take on the Oakland A's. Our hometown Phillies did not win, but my wife and I sure did eat well.

At Citizens Bank Park where the Phillies play, they let you bring in your own food and snacks. Not many ballparks allow this because they want you to eat their hotdogs and Crackerjack®.

We had some leftover steak from the night before so I decided to make a couple of special sandwiches for my wife and me to bring to the game. The girls wanted ballpark franks, french fries and popcorn so no sandwiches for them.

I have not talked much about sandwiches on here and I need to. The anatomy of a sandwich is fascinating to look at. Everyone has their own ideas for making the perfect sandwich and there are so many ways to make an everyday bologna sandwich into something special. In this case I started with a little more than bologna.

I started with a leftover piece of filet Mignon from the night before. We were out for dinner and my 11 year old daughter and I like to split a steak, but this was a large cut and we couldn't finish it. There was just enough left over for two sandwiches.

On Saturday mornings, my wife and I head out to the farmer's market for some of the week's groceries. I usually stop at the cheese market to find something new to taste and write about. Usually it's a stinky washed rind cheese but this day I tasted and purchased a most incredible blue cheese called Point Reyes Blue. 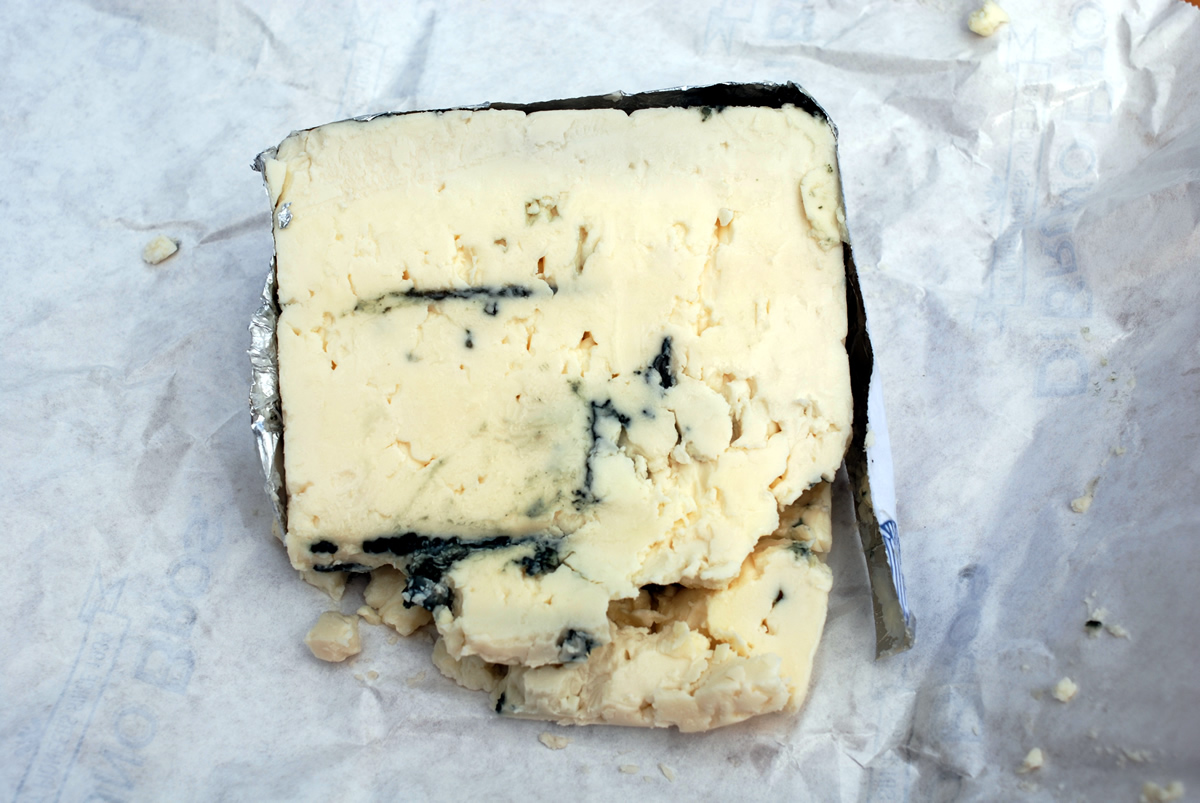 I will be writing more about this wonderful cheese but I can tell you it is from Point Reyes Station, California and is made from Grade A raw milk from Holstein cows that "graze on the certified organic, green pastured hills overlooking Tomales Bay". Let's just say it makes an amazing addition to a steak sandwich.

If I don't bring a sandwich to the game, I typically have a sausage, onion and pepper sandwich. I love the flavor of slow cooked caramelized onions so I decided to add some to my sandwich. I sliced a sweet yellow onion into rings and slowly cooked them with some butter over low heat until they were sweeter yet. 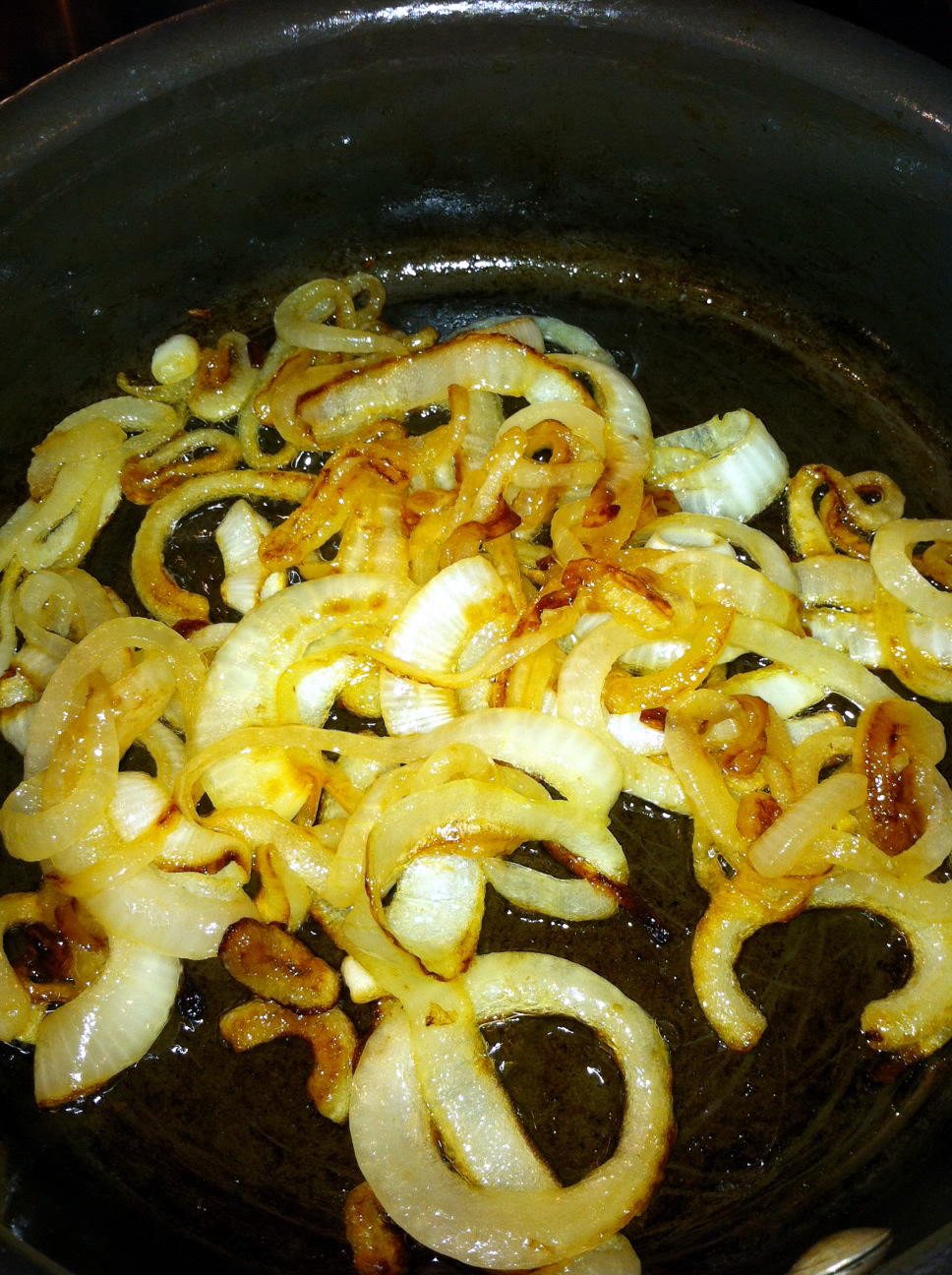 As with any sandwich, the bread you put the ingredients onto is critical.  For example, I like a turkey, tomato and lettuce sandwich on untoasted whole wheat bread but a tuna salad sandwich on toasted whole wheat. A grilled cheese sandwich is best in my opinion on white bread, and anything with sprouts can go into a pita bread with ease. 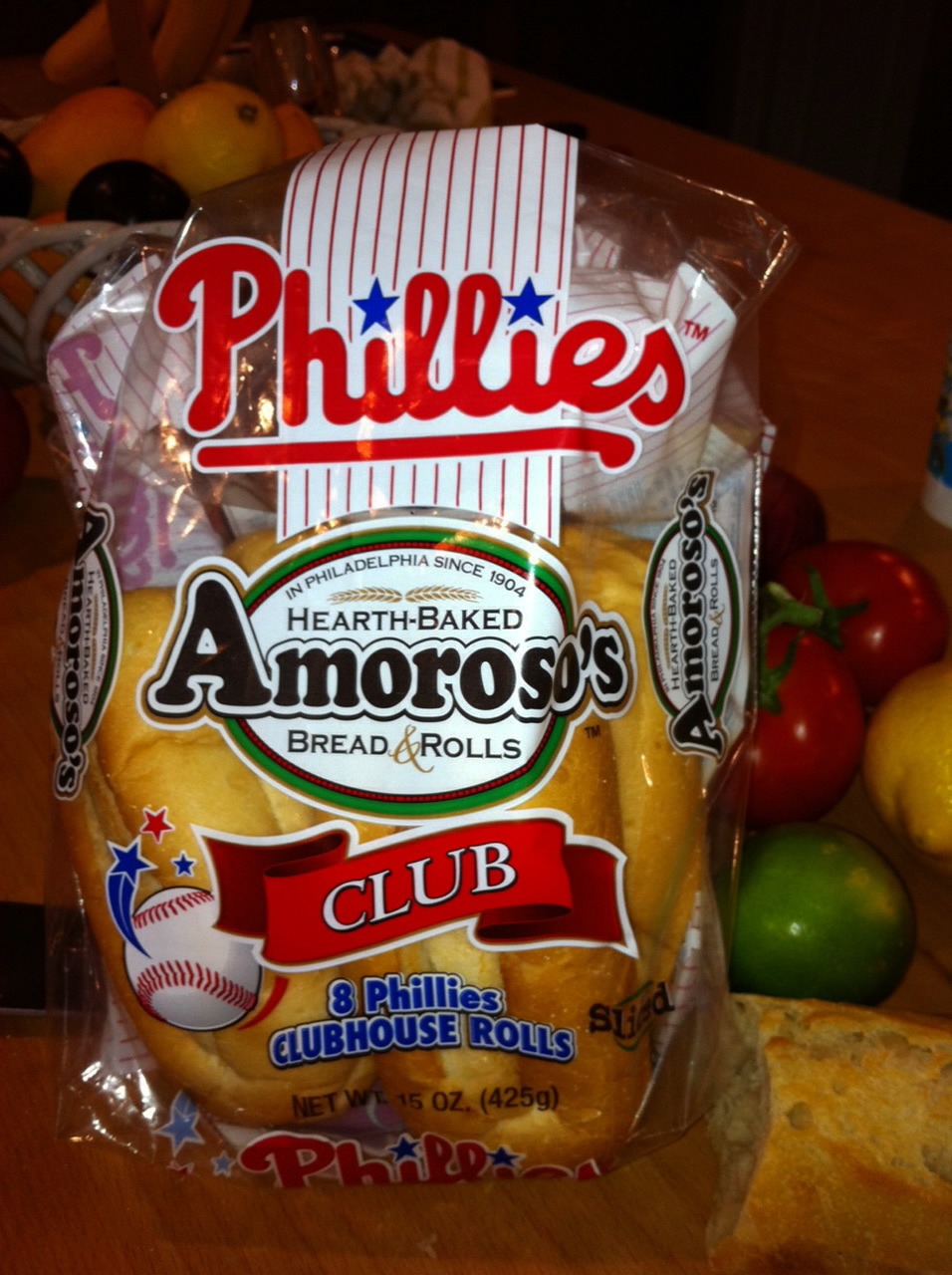 For this steak, cheese and caramelized onion sandwich, I needed something more substantial. We just happened to have some Phillies Clubhouse Rolls made by Amoroso's around so of course I went with them. These hearth-baked rolls have been made in Philadelphia since 1904 and I guess are the official roll of the Phillies. It says so right on the label. 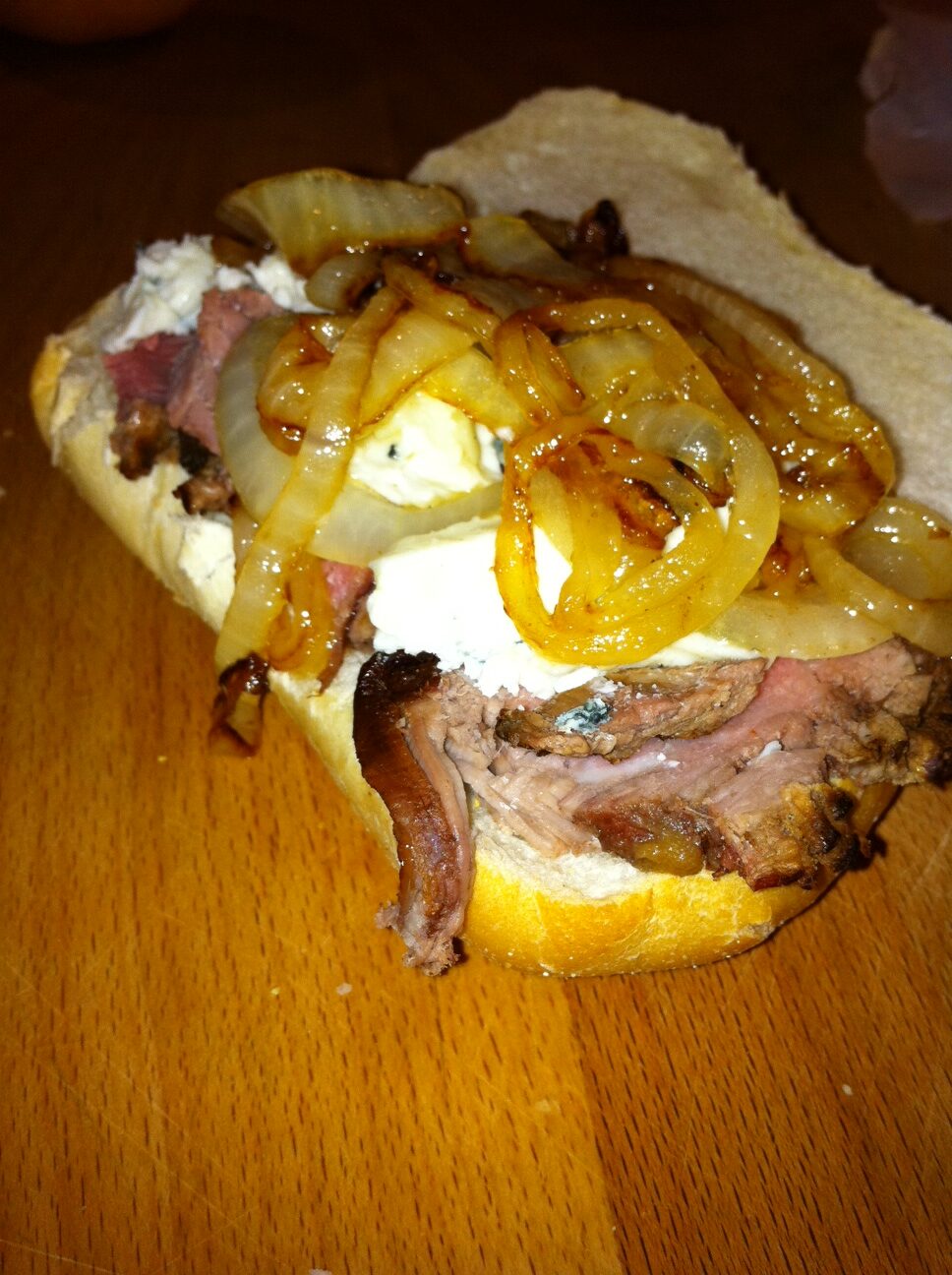 To assemble, slice open the bread and then stack on the steak, cheese, onions and a little salt and pepper. The onions were just out of the pan so they melted the cheese onto the steak.

I wrapped them up in some aluminum foil and they were ready to go.  You can see me in the photo below about to take my first bite of this delicious sandwich as one of the Phillies was at the plate.

So my question to you is What's Your Favorite Sandwich To Bring To A Baseball Game? 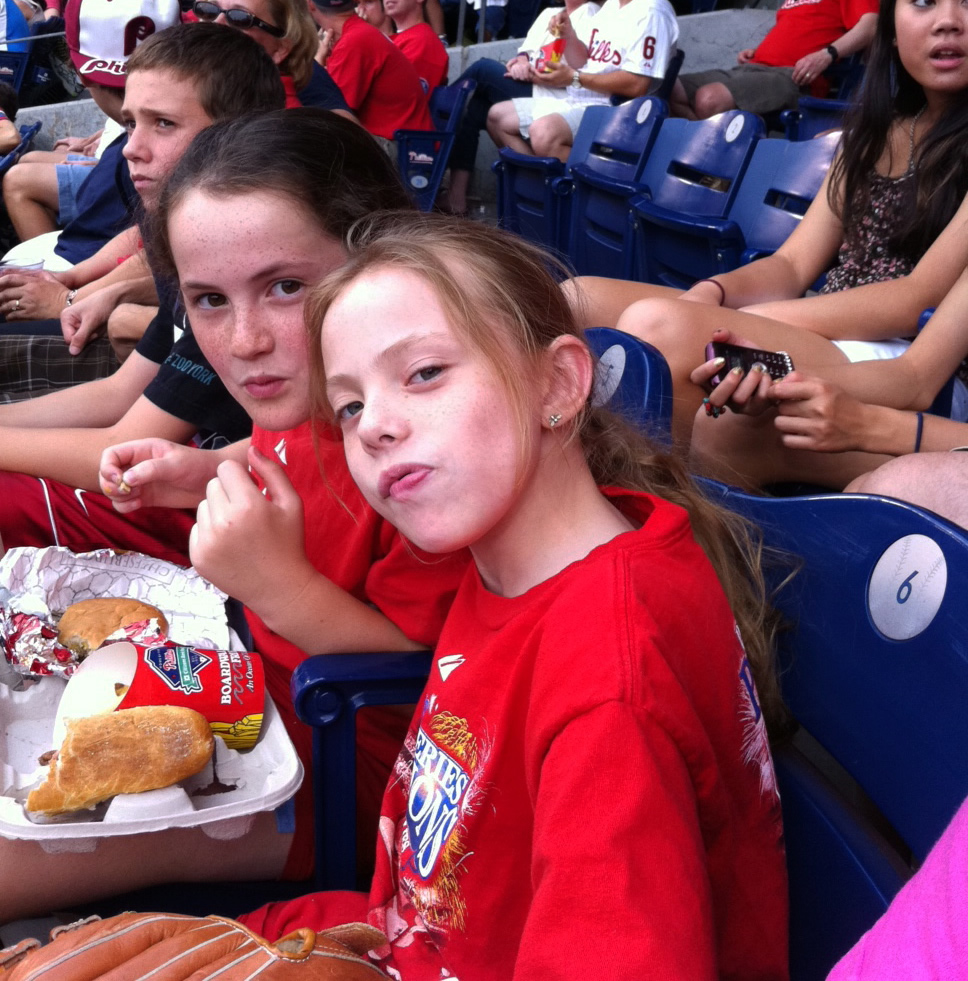 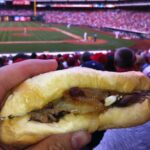 Enjoy at the ballgame, or wherever!
« Watermelon Salad Recipe
Can the James Beard Foundation Help Me Pay for Culinary School »