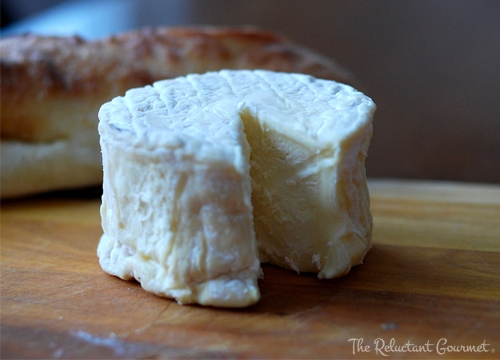 Most Saturday mornings my wife and I head out to our local Farmer's Market to buy some local produce, Amish egg rolls for the kids, eggs, meat, fish, fresh bread and some interesting cheese for our morning breakfast. This is where I learn about new cheeses to write about here on the Reluctant Gourmet cooking blog.

In the past I've told you about my buddy Cheeseman Jack who taught me a lot about cheese and how to buy it, but he's now at his store in Philadelphia and is a little out of the way for us to go see on a Saturday morning. Now, I have Bill, who I may start calling Mr. Cheese, to help me find new and exciting cheeses.

For a while, my wife and I were really into Stinky Washed Rind cheeses, and we tried several great ones from around the globe including some wonderful examples made right here in the United States.

Still, there are not many domestic producers, but the number is growing, and some of them are getting so much recognition that they are shipping their product to Europe. This is hard to believe given how much great cheese there is in Europe.

We are now into Stinky Blue cheeses, and again there are plenty to go around. Today we purchased a lovely Black Ledge Blue, a wonderful example of how a natural blue cheese is being made right here in the USA in Colchester, Connecticut by Cato Corner Farm.

I'll tell you more about the Black Ledge in a few days, but today, I wanted to tell you what Mr. Cheese taught us about purchasing cheese.

Tasting Cheese Before Buying Is a Must

My wife wanted to try a hard cheddar-type cheese, so I asked Bill to suggest a few ideas. He grabbed a couple out of the case, unwrapped the cellophane and offered us a taste. One of them was a cheddar and the other a Cheshire cheese.

Both were good, but when Bill asked me what I thought, I said that, while I liked them okay, they both had an aftertaste that I didn't care for. I couldn't put my finger on it right away, but the taste was familiar.

I didn't want to hurt Bill's feelings by saying that I didn't like the finish but if I'm going to spend $20 plus per pound on cheese, I better be loving it. Besides, he only sells the cheese; he didn't make it!

Bill didn't say anything and immediately grabbed another cheese, this time a Cabots Clothbound Cheddar, unwrapped it and gave us a taste. Amazing, and no funky aftertaste.

I asked him if I could try the Cheshire cheese again. He gave me another taste, and there was that funky aftertaste.

The cheese starts out great. It really is a tasty cheese, but then I realized the finish I was experiencing is best explained when something has been in the refrigerator too long and has that "refrigeration taste."

What Was That Funky Taste?

When I asked Bill about this, he didn't confirm it but he did acknowledge that some people have similar reactions. He even went so far to blame himself for my tasting this particular taste, which is ridiculous.

He explained that some cheeses, like the Cabot Clothbound Cheddar, are much more popular and therefore turn over more quickly. They don't sit around as long in the refrigerated cases as some of the other less well-known cheeses like the Cheshire we sampled.

He went on to say that in France, cheeses are sold unwrapped on counters without refrigeration because they don't have the same laws as we do about displaying foods. He described how cheese is much more popular in France so it doesn't last that long on the counter as it might here.  So, in France, there is no chance of "refrigeration taste."

This made sense, so I wondered what would happen to the taste if I let the Cheshire sit out for 20 or 30 minutes.  I guessed that maybe the refrigerator taste would dissipate.  I asked Bill to cut a small piece for my experiment.

What happened next taught me something new when buying cheese. Bill took the remaining wheel of Cheshire out of the case, cut it in half and cut an inside piece from the wheel. When he gave me a sample to try I realized there was no funky aftertaste. None! Hmmm?

So What Did I Learn Saturday About Buying Cheese?

1. If you are buying pricey cheese, make sure you ask for a taste. Impossible if you are buying pre-wrapped or prepackaged cheese at the local market. The old expression, "Buyer Beware" never was more true than when buying cheese. If you are spending $20 plus per pound, you have every right to ask to taste the product.

Don't be a jerk and ask for 10 tastes and then buy nothing. Save those tastes for the big box stores where they are offering you product tests at every corner.

2. If the cheese has an off taste like the "refrigeration taste" I experienced, speak up. Most customers don't like complaining. I know I don't. But it's important to let the cheese person know what you are experiencing so they can offer you something else or cut you a piece from an interior part of the cheese.

I can't imagine they like having to cut from the center since they'll end up with a bunch of little pieces in their case but I say, "So what?" If you are going to spend that kind of money, you want the product to be just right.

Now, it may be that the cheese is perfect and you just don't like the taste of it. Don't confuse that with an off taste. The cheese monger should be able to taste if something is a little off. If the cheese is fine and you don't care for it, move on and try something else. There are enough cheeses in most cheese shops to find a perfect fit.

3. Get to know your cheese person. I frequent this market every weekend, so I know Bill and he knows me. He is learning what I like and what I don't like, and he makes a special effort to introduce me to new cheeses and to offer me samples to taste.

The more I get to know him, the better service he is going to give me, and because I'm a good customer, he doesn't mind cutting a cheese in half to make sure I enjoy what I buy. It's really a great way for this market to do business, and I reward them with my patronage.

Saturday was the first time he asked me if I wanted to know what was on sale. This is where you can get real deals for great cheese or any ingredient you are buying. Stores sometimes purchase too much of one product so they have to "move" it.

There's nothing wrong with it, but they want to "move" it before there is a problem. Having a relationship with your cheese monger provides a much better opportunity for him to offer you these specials, especially if he or she knows what you like.

So Saturday was a good day. I learned something new about cheese and arrived home with some great new cheese to enjoy and write about. I can tell you already the Cabots Clothboud Cheddar is amazing. Look for a write up soon.