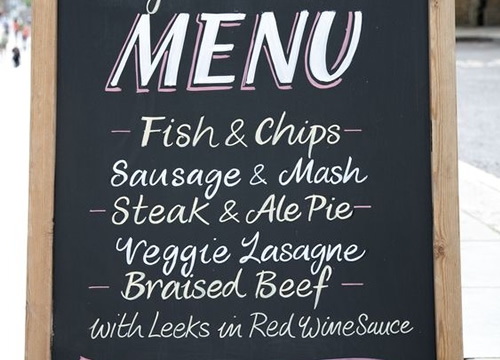 The Carte Before the Course

Imagine being a traveler in Europe in the 17th or 18th century, plodding your way through the narrow roads of the hinterland.  There are no mechanized vehicles of any kind.  Distances that can be traversed in hours by modern means require days, even weeks, by foot or hoof.

Naturally come nightfall, you require sustenance, rest, and safe haven from highwaymen lurking in the shadows.  There are no Hiltons, no Marriotts, and no diners.  Your sole option is to stumble across a local inn.

At supper time the inn keepers provide a basic, family style meal for themselves, the guests, and any friends or family present.  There is no menu, no choices from column A or B, and no "make mine well done with the sauce on the side."  The paltry scope of victuals is based upon whatever is available that day and you're thankful for even that.  You are being served the table d´hotel, French for the "table of the host."

What is Prix Fixe?

Table d´hôte and its later synonym "prix fixe," refer to a predetermined, full course meal at a fixed price.  The introductory scenario exemplifies its strictest definition: no substitutions or choices. Nowadays a typical prix fixe menu will consist of an appetizer, entrée and dessert, at a set price of course, but with some alternatives within each category.

What is A la Carte?

A la carte, (French for "according to the menu"), the opposite of table d´hotel or prix fixe, is a menu with a panoply of offerings and side dishes and little formal structure as to the courses.  Each item is ordered separately and priced individually.  The diner is free to decide the number and nature of the comestibles that will compose their meal.

I once dined at an upscale steakhouse in Portland, Oregon that was literally Ã  la carte.  The steak arrived with nothing else on the plate, not even a garnish.  Every single item had a separate charge.

I believe the reasons why a restaurant may opt for an A la carte menu vs. a prix fixe fall into one of two general categories:  economic and logistical.  From a purely economic perspective, the decision will be based solely on which generates more revenue.  Making this determination is not facile.

Large, financially viable corporations have the resources to hire economic professionals and conduct market research.  You can be sure that the multi-billion dollar hamburger chain did their homework before initiating "combo" meals:  a burger, fries and a drink priced less than purchasing them individually.

Given their endurance at most fast food establishments, combo meals must be creating more revenue than a strict Ã  la carte menu.  The consumer who desires a burger, fries and drink saves money with the package deal.

The golden goose for the eatery are the individuals who intended to buy two of the three items, but are swayed by the "savings" and order the combo which boosts total sales.  This is akin to food coupons which offer "$1 off two."  It prompts people to buy more to save money which is paradoxical.  Unless you really want or need more of the product, you aren't saving anything.  Overall you're spending more which is exactly what they want you to do.

The average restaurant however, doesn't have the luxury of an army of economic advisers.  They are more likely to rely on their business experience and sometimes trial and error.  They introduce a prix fixe menu and then see how it goes.  Let the red and black ink decide whether to maintain it or not.

Advantages of a Set Menu

A set menu has other economic advantages.  It usually has fewer selections than an A la carte menu.  The greater the number of foods that a restaurant must procure, the greater the potential of waste and spoilage.  Moreover, buying fewer items, but more of them, often results in lower per unit prices.

Logistically, many chefs prefer a table d´hôte simply for the ease and convenience.  A set menu attenuates the array of products that need to be stored, washed, prepped and cooked; each of which may have their own particular requirements.  It also abates substitutions and special requests from finicky patrons, a perpetual monkey wrench in the flow of the kitchen machine.

A limited and structured menu is unequivocally easier on the kitchen.  This is especially true for fine dining establishments where significantly more time and effort are put into every dish.

Which menu benefits the consumer depends on the individual in question.  If you rarely eat dessert and are forced into the package deal, you're likely to spend more than intended.  And if you're a picky individual, then forget about it.  The narrower your scope of acceptable foods, and the fussier you are about them, the less a prix fixe menu will work for you.

However, there's a semi, best-of-both-worlds compromise that almost fully satisfies businesses and patrons alike, namely offering a prix fixe menu and A la carte simultaneously.  This is what's known as "mixed bundling."

Diners can choose the table d´hôte menu and/or select items independently.  Economically it's an attempt to appeal to all customers, thus maximizing revenue.  It's perfect for patrons but has a few remaining glitches for the eatery.  There's still the issue of having to acquire a plethora of ingredients and it doesn't mitigate the kitchen's burden like a pure prix fixe menu does.

In the end you as the consumer will gravitate toward the establishments and pricing policies that resonate with your needs and desires.  Fortunately, this is not the 17th century. Modern economic systems allow for greater options and variety. Unless you're really off the beat and path, you won't need to be at the innkeeper's mercy.